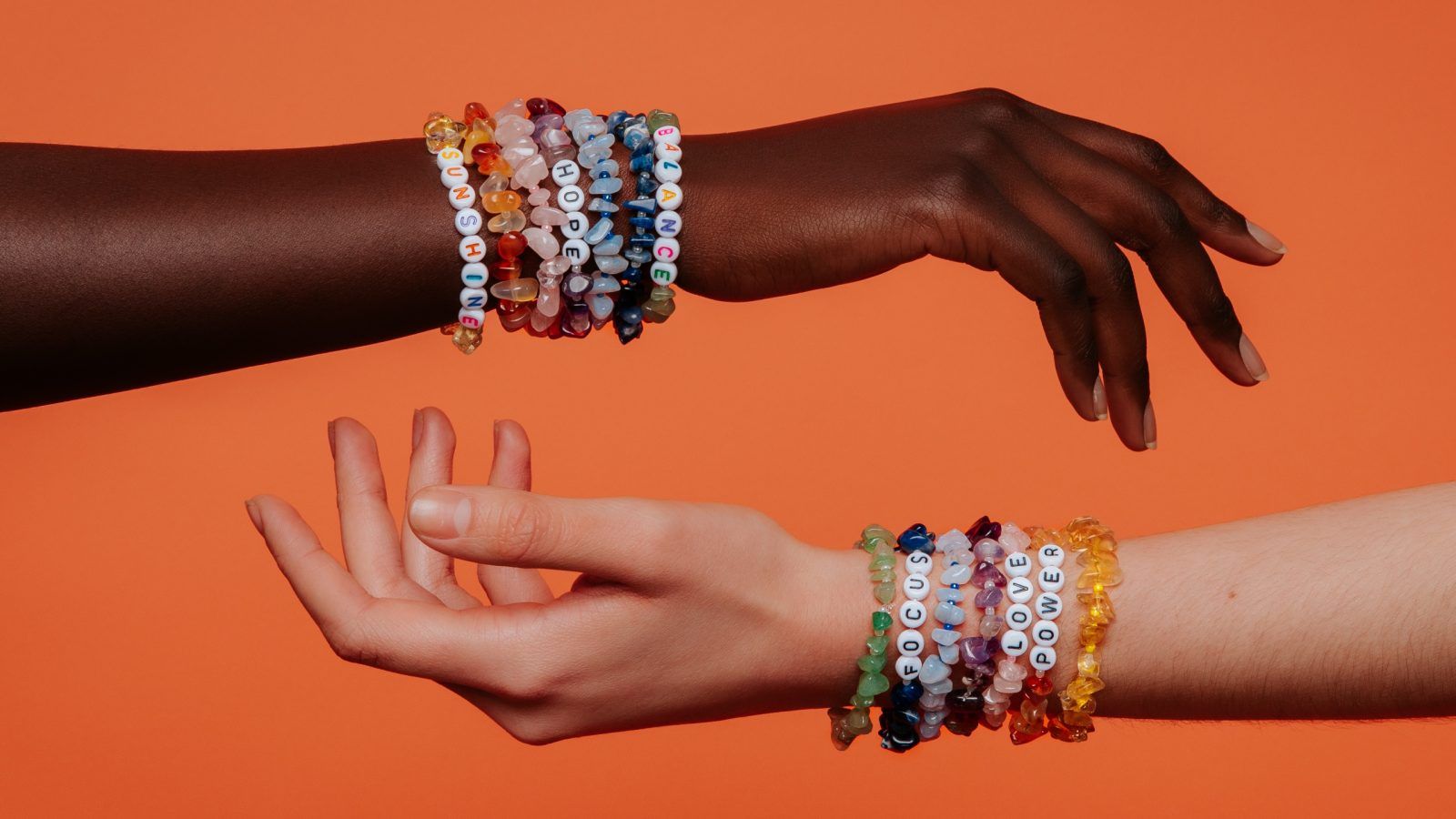 Walk into any storefront deliberately scented with Palo Santo and you’ll likely be confronted with trays upon trays of gemstones, colour-coded and categorised based on their purported modes of efficacy. Devout sceptic Joey Wong finds herself stuck between shiny rocks, a hard place and, then, a softer place

It might be a string of rosary beads, clutched tight between thumb and forefinger. Or a tufted, jewel-encrusted crown, ceremonial, heavily insured and held behind a bullet-proof case – viewable only by ticketed entries. Or a glistening emerald ring that’s always decorated your mother’s fourth finger, one she’s now entrusted to you, for yours. It doesn’t matter much whether it’s in deference to religion, to the monarchy or to love, devotion and everything else held close to the heart, but jewels and gems that glitter just so have always meant more than what they’ve offered at face value – as circumstantial deposits of mineral.

From amulets for protection to evil eyes said to ward off bad spirits to semi-precious stones believed to possess healing properties, jewellery’s affinity as a conduit for the talismanic is nothing new. In fact, it’s as ancient as they come.

It’s easy to fold your arms and scoff, with a practised eye-roll, about how astrology isn’t real; about how tarot isn’t real; about how crystal healing isn’t real. Such is the reality for objects and practices of alternative spirituality, a mode of belief that’s amorphised into distinctions of self-care in our new age of wellness, where whatever self-fulfilling, self-satisfied woo-woo is served neat – with a slick Shopify e-commerce site, naturally – as deserving credence alongside science and mathematics in Newtonian space.

Because truth, whatever that means to you, has seen better days. The vehicles that have brought us ever closer together – the world wide web; email; Facebook; anything that can be accomplished with a sufficient wi-fi connection – transfigures into the very same disinformation machine that drives fissures, then breakages, then outright insurrections in society at large. It’s where truth becomes subjective, where science-backed research carries the same weight as furious manifestos, simply because of how loud the ensuing applause sounds and how fast the algorithm serves up this point-of-view for slaughter. It’s, too, where anti-vaxxers, flat Earthers and the Anna Delveys of the world – and the Netflix adaptations that follow – proliferate, anchored by hordes of nameless, faceless, possibly AI-generated profiles that, maddeningly, agree.

It’s quite the insidious practice to conflate wellness as something you can buy, right alongside terribly produced NFTs, hair vitamins, slimming teas and whatever else the KarJenner clan has been paid good money to peddle. But truth – absolute, undeniable, logic-based truth – is, apparently, not the conversation we need to be having.

“The practice of using crystals for healing has been around for thousands of years in many different cultures and communities, as our ancestors looked for ways to bring about healing and protection,” says Kaye Dong, founder of wellness-lifestyle retailer The New Moon.

And, well, of course. Our ancestors – without the research that exists today; without Google searches several haptic clicks away – are bound by what they can see; what they can touch. If they happen across shiny, coloured stones nestled deep in rain-wet soil and riverbeds, then that must, surely, be a sign from somewhere special. A sign from whatever deity they pray to.

The human experience – which grows more and more poignant, more and more futile with every increasingly high-res image of the sheer, terrifying expanse of the observable universe, released with yet another clickbaity headline – has always been about finding meaning in dust; about finding something to grasp on to in stories, in things we tell each other. This is, presumably, what American essayist Joan Didion meant when she wrote, “We tell ourselves stories in order to live.” Because what a dreadful, meaningless, utterly toiling existence otherwise.

Crystals, whether worn close to the skin – Dong recommends the practice as a way to “to harness the energetic powers of sacred stones” – as jewellery or as a larger specimen that adorns the home, can just be so: a pretty trinket you’ve chosen to add to your life. Like a bouquet of tulips you’ve purchased from Gage Street that makes you feel warm. A perfect trapeze dress that makes you feel like sunlight, personified.

“There’s no ‘one crystal fix for all’,” Dong continues. “Different crystals have different uses, as they all have unique properties that align to specific areas of our lives. By manifesting the right intentions, crystals can help us improve our mental well-being by balancing our energy fields and increasing our positive feelings, including self-confidence, tranquillity and focus.”

Intentionality is where questioning sceptics and true believers can finally settle their differences and discover a small patch of shining, common ground. To use crystals not as a quick fix-all but as an Inception-style totem, weaving into existence a space where intentional thought and intentional being – be it a conscious reminder to breathe in moments of anxiety or as a conduit of redirection whenever negative thoughts surface – can be recalled and enacted. It’s relief we’re seeking, after all, whether this manifests through dedicated journaling, an hour spent on a yoga mat or a fleeting minute lavished on meditating alongside whatever crystals you have on your person.

“Harnessing the vibrations of the Earth and its elements, crystals have the power of connecting us to the energies of the universe as we come into contact with them,” says Dong. “But only when we consciously open our heart and mind to the potentials of crystal healing do we become more receptive to the stones’ natural energies as we enable them to bring harmony to our energy fields.”

And whether we like it or not, the vernacular of crystals and stones has steadfastly filtered into the language we speak. When Gabriel Hearst sent models sauntering through her cobblestoned autumn/winter 2021 runway with crystals leather-strapped – always in pairs, alternating between citrine, quartz and rose quartz – from both necks and handles of handbags, the designer says clients can pick and choose “depending on what chakra you want it to be”.

Elsewhere, also huddled within a Parisian arrondissement, veteran jewellery designer Marco Panconesi, muses, surrounded by rocks and stones he’s both collected and fashioned: “To me, they’re alive and of another world.”

It’s a matter of preference whether or not these little exercises in belief – in chakras; in energies; in vibrations; in hypotheses of the existence of “another world” – add anything worthwhile to your own practice in intentionality.

For Dong, recharging her crystals involve smoke- cleansing with Palo Santo or sage, or by bathing them, laid out in arrangement, under a full moon “where the energy is particularly powerful”, before setting intentions. For you, this could be hogwash. And that’s OK, too.

“Use your intuition – and don’t forget, desire and attraction are merely manifestations of your intuition, too,” recommends Dong. “If you have a favourite colour, there’s an energetic linkage to that and, similarly, visual appeal is directly connected to your subconscious likes and needs; a vibrational alignment.”

So, wear the peridot ring, for no reason other than because it calls to you. Because that shade of grass-green reminds you of meadows you daydream about frolicking through, Sound of Music-style. Then, commit to exercising, to eating well, to taking time to breathe; to live – good health will follow.

After, clasp that dangling pink quartz strung through a leather strap a little closer to your heart. Just because the faceted bullet shape of the crystal feels good held in the palm of your hand; its smooth, shiny marbling good on the eyes. Then, commit to really, really listening. To communicating effectively. To being vulnerable with the ones you love most. To being a better friend; a better lover.

It’s clear, then, the question we should be asking isn’t, “Do crystals really work?” but, rather, “Who cares if crystals ‘really’ work, if they make us feel a little better; a little more in control of our lives and destinies?”

Who cares if some of us find comfort in cradling glistening fragments of stone as makeshift training wheels ever-so-slightly raised above ground level, only to discover, one day, that we can finally cruise on a bicycle? Who cares if some of us need a totem tugged on to our wrists as a reminder to be positive, be well, be kind?

After all, some might cast their eyes downwards and kneel, with fingers clasped tight in prayer, for divination. Some might flip to the very last page of tabloid magazines in search of an astrological entry, written by someone as mortal as you and I. Some might look to mineral and calcium – maybe magnesium and iron, too – for self-reflection and, ultimately, self-improvement.

Some might look up to the stars and try, hard as they might, to unearth meaning from flickering pinpricks of light that might be a star, might be a satellite, despite knowing they’re casting wishes on helium, hydrogen and plasma held together by gravity – all light-years apart from each other with no apparent connection at all.

But still. Don’t we all find fractions of truth in fiction?