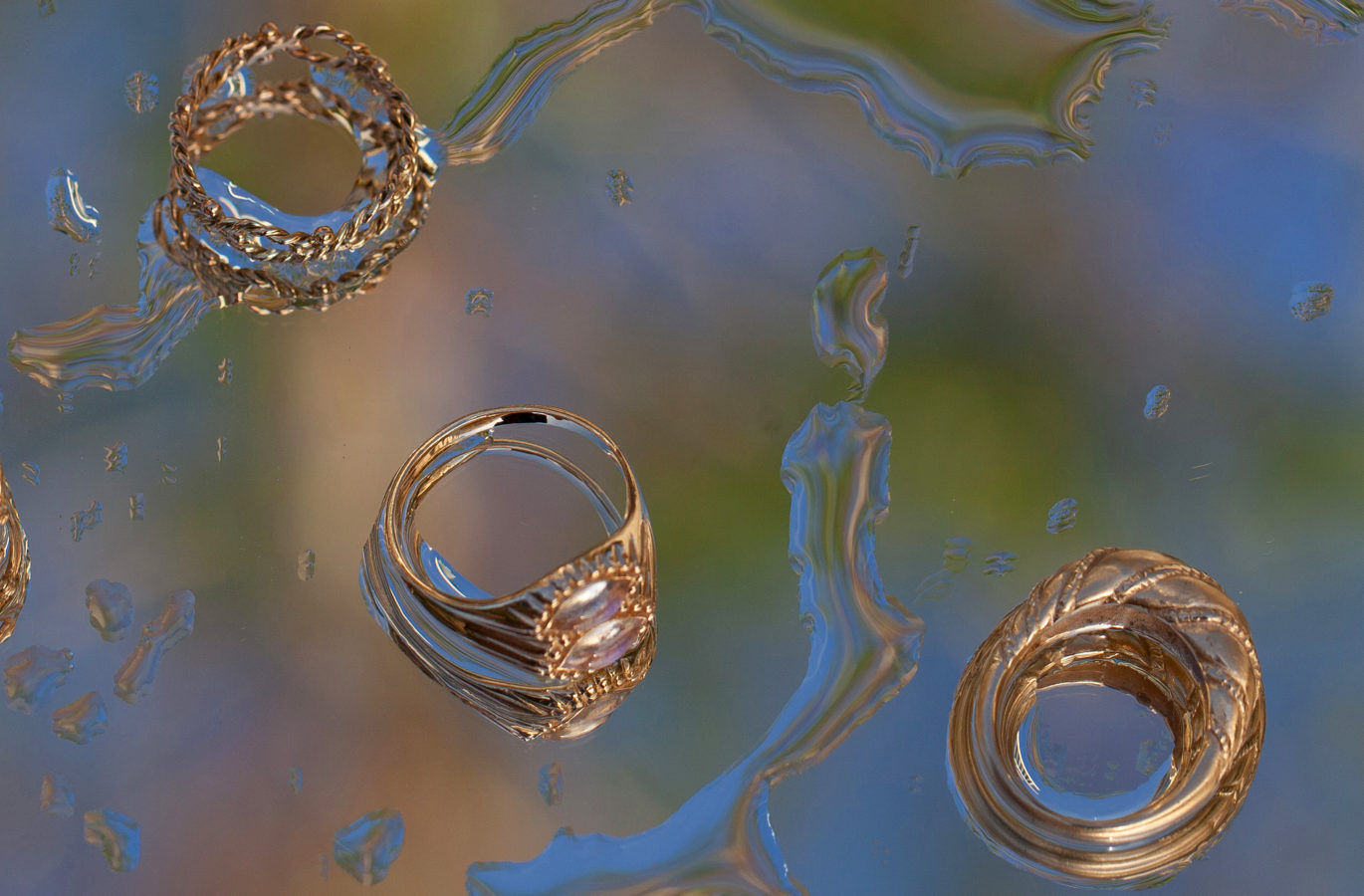 Fusing science and art to create sustainable jewellery is the latest trend among young independent jewellers. Anabela Chan and Eliza Walter tell us how they’re changing perceptions on lab-grown diamonds and salvaged metals.

The fine-jewellery industry’s track record on sustainability has long been under scrutiny. No one today can claim to be completely oblivious to the devastating impact mining has on the environment and the communities that power the supply chain. And though the industry has made inroads into reforming the diamond market and implementing positive environmental and ethical changes to the trade of gold and jewels, to industry insiders these practices are often viewed from the standpoint of mitigating risk rather than as a real business opportunity that does good.

This is all changing, of course, as the new generation of consumers has proven increasingly conscious about sustainability, but even before traditional jewellery companies pivot their strategies to changing consumer mindsets, a rising group of independent jewellers has already taken the task head on, finding innovative ways of creating sustainable jewellery that takes mining out of the equation.

In conversation with Independent Jewellers Anabela Chan and Eliza Walter

Anabela Chan is one such jeweller. A trained architect who spent a few years in the fashion industry, Chan had become disillusioned with the wasteful aspect of seasonal fashion shows and decided to put herself through London’s Royal College of Art to become a jeweller, which she believed was an industry with no seasons and the ability to transcend generations.

And while those two points are true, what Chan didn’t realise until her second year of college was that something much darker lay behind all the glitter and sparkle. “I was in my second year at RCA when I got married and went to Sri Lanka for my honeymoon,” she says. “Sri Lanka is really famous for its coloured stones so we went to visit several local mines. For me, that was a life-changing experience just seeing the conditions in which people worked and how little they were paid.

“These are people mining some of the most precious commodities in the world and yet they live some of the harshest lives. That was when I began my research into alternative materials and began to think, ‘How can I create equally incredible and red-carpet-worthy jewellery without the untraceable provenance, ethical, conflict and humanitarian issues associated with mining?’”

Although Chan could have joined a big fine-jewellery house upon graduation, she realised she didn’t want to follow the same pattern. “It didn’t sit well with me – and because I’ve worked in the industry before, I know the only way to be able to make decisions is if I were to start my own company and start my own brand.”

Taking 20 cocktail rings she’d designed for her graduation show, Chan won an account with Selfridges, went around the world holding trunk shows and began her journey into fine jewellery on her own terms – by using synthesised gemstones and recycled gold. This was eight years ago, at a time when using a laboratory to grow and synthesise gemstones was frowned upon, even if the grown diamonds and gemstones are physically and atomically identical to those mined from the ground. “Nobody would see them as anything more than a pretend or a lesser material,” says Chan. “Even today, those who work with them still tend to set them in the most mundane way, like a solitaire setting. Nobody was investing time and effort in the artisanship, the craftsmanship and design for laboratory-grown gemstones. But I don’t see it any differently and we don’t treat them differently. Ultimately, I’ve always thought it’s fascinating to see science and art fused together to create this incredible alchemy of materials.”

It helps that in the UK, innovation and development of both the science and the arts are relatively advanced. At the Royal College of Arts, Chan had the opportunity to study at the Innovation RCA department, where students are encouraged to push boundaries in material science, working alongside engineers from Imperial College to bring about new ideas and creations.

In 2020, Chan unveiled her first fine-jewellery collection using recycled aluminium from soft-drink cans. Grounded in research, the project was two years in the making. “We were essentially turning trash into treasures,” Chan explains. “I was drinking a San Pellegrino and on the can it said something like ‘cans are recycled forever’, and that got me thinking about recycling these cans for my creations. The difficulty was that because they’re recycled forever, they pick up a lot of impurities along the way. We had to figure out how to refine the aluminium to a state in which it can be used in fine jewellery. What’s exciting is because aluminium is so lightweight I could work on a much larger scale and it’s still comfortable to wear from day to evening.”

Mermaid’s Tale is Anabela Chan Joaillerie’s second collection created with recycled aluminium cans that she herself had collected with her children during frequent trips to the seaside in 2020, as well as bits and pieces of ocean waste her friend Valentine Thomas – a worldrecord free-diving spear fisherwoman – had collected on her adventures.

The collection was very much inspired by Chan’s friends – Thomas, as well as as Lily Wang, a public healthcare professional turned underwater photographer and conservationist – and while it gave Chan an escape during an extraordinary year enduring London’s lockdown, it also kick-started a new initiative for the brand that was aimed to preserve the oceans. From a collection inspired by the ocean – and made with ocean-waste metals – came a desire to restore the ocean’s ecosystems. The Anabela Chan Ocean Initiative pledges to plant 100 mangrove trees via The SeaTrees Project for every creation sold, and will work with local communities on Biak Island in Indonesia’s West Papua province to estore and protect coastal ecosystems.

Another London-based jeweller who’s constructively looking to the future of sustainability in jewellery is Eliza Walter, who founded her brand LYLIE at the age of 24, after training as a goldsmith in London’s Hatton Garden after earning a BA in art history. Walter worked full time for a Mayfair art dealer while growing LYLIE on the side for three years. Her passions were in sustainability and design.

LYLIE uses salvaged gold and silver that’s e-mined – in other words, metal recycled from discarded phones, tablets and computers, as well as dental waste and her company’s own in-house gold exchange programme. For gemstones, the brand only uses lab-grown or recycled antique diamonds and gemstones, in fact, it’s currently the only UK jeweller to source all its materials from urban mining and has been awarded a special hallmark by the London Assay Office.

It definitely takes guts to do something different, but as Walter tells me, “When you’re young, your risk appetite is high and you don’t really know any better.” Her parents both ran small businesses, so it only felt natural to Walter to want to do the same. She ran an online business while at university and used the capital she’d saved to invest in LYLIE, growing the brand herself as a solo entrepreneur.

“My mother’s mantra is to do everything at 80 percent,” she says. “It really helped me with getting things done, launching a minimum viable product and then adapting and evolving to meet customers’ needs.”

Walter had dabbled in jewellery-making while in high school, and it was then she first found out about e-waste. “Unusually, my school had a resident jeweller, so I learned the very basics of wax carving from her when completing my Design GCSE. In order to cast my final design, we worked with a local foundry that was just getting going. The owner, Peter, explained to me that my mobile phone’s circuit boards contained gold, platinum and silver, because the metals are inert and conductive.”

When she received a grant from the Enterprise Society during her second year at Bristol University, Walter began researching into clean, green and recycled jewellery – “Typical student and being in green Bristol,” she jokes. She was reminded of Peter and reached out to the foundry owner again.

“We”ve been working together ever since and his foundry, which has grown considerably, still casts all of LYLIE’s jewellery pieces,” says Walter. Aside from salvaged gold, LYLIE also only uses lab-grown or recycled antique diamonds in its creations. Walter says views are changing. As they realise lab-grown diamonds are chemically, physically and optically identical to mined diamonds, but lack the negative social and environmental impacts, many clients are now opting for lab-grown stones.

Like Chan and many other independent jewellers, sustainability weighs heavily on Walter’s mind. “We’re in the midst of a climate emergency that has massive and probably permanent ramifications,” she says. “Mistakes have been made but it’s about making a better decision every day going forward.”

LYLIE is currently working on carbon reporting for every single product it makes. “Our key design principles,” says Walter, “are that everything we make should have the lowest carbon footprint possible. They should be easy to dismantle and every element should be recyclable. I also think jewellery made from e-waste and our gold exchange can be a force for change. Over the last four years, I’ve been amazed by how few consumers think about what happens to e-waste at the end of its life or looked to recycle their unwanted jewellery. Salvaged gold from e-waste and our gold exchange gets people thinking.”