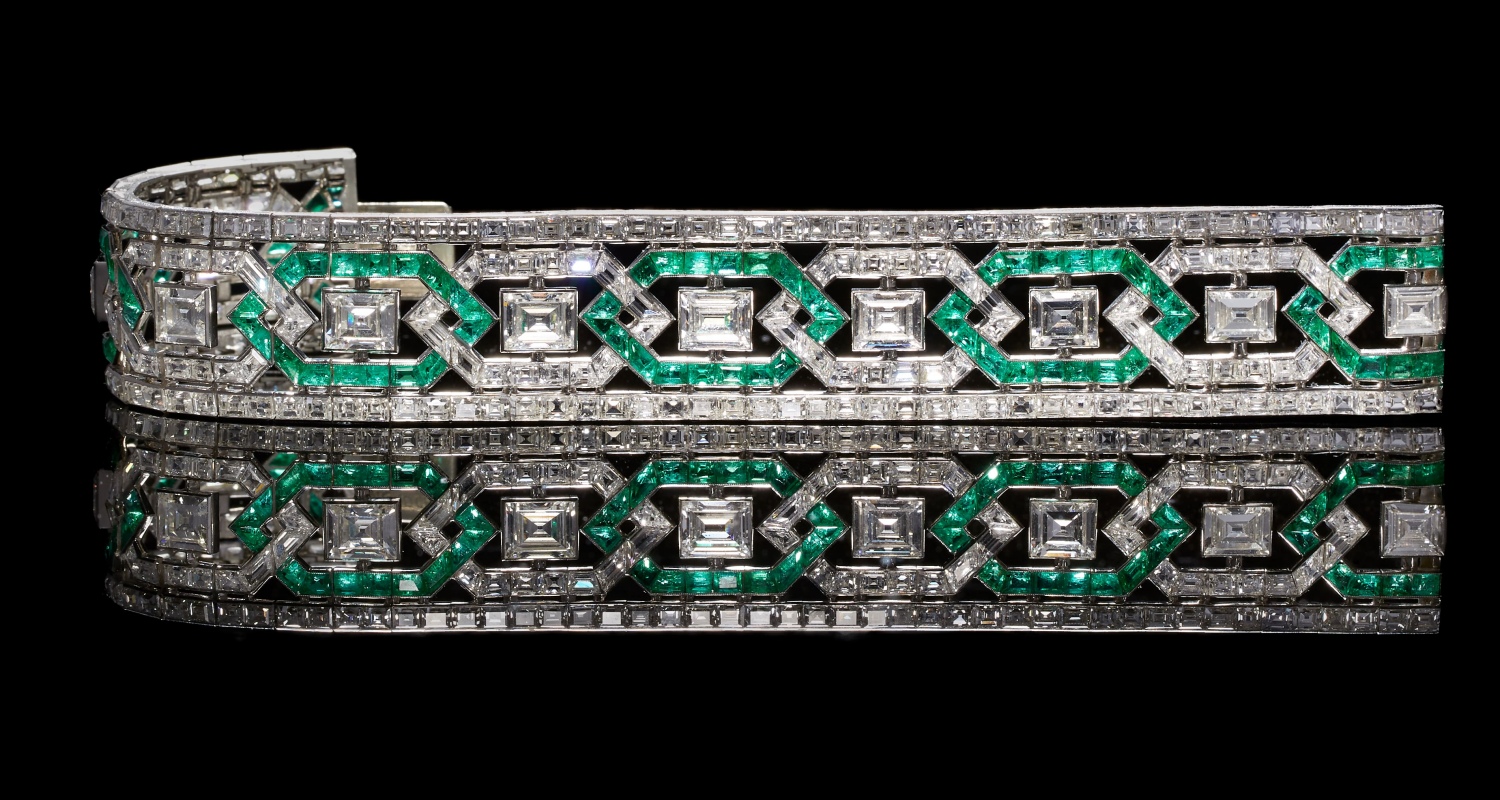 L’École School of Jewelry Arts shines a spotlight on Lacloche, once one of Paris’ most revered jewellers before its demise in the 1960s. We talk to curator Laurence Mouillefarine and Managing Director Elise Pon-Gonnet to discover the captivating creations of this long-lost jeweller.

Anyone who watched Casino Royale will recall the scene when Vesper Lynd looks at 007’s wrist and asks, “Rolex?” to which Bond replies, “Omega.” A short but sweet exchange, with both brands getting a reputational boost from the 2006 film’s screening, marketing ploy or not. But now, imagine this. A similar exchange took place almost a century ago in Noël Coward’s 1924 theatrical comedy Easy Virtue, when a gentleman complimented the heroine Larita’s cigarette case. “Cartier?” he asked. “No, Lacloche. I’ve had it for years,” she replied.

Marketing campaigns hardly existed back then, which made the exchange that much stronger. These few lines reveal so much about French jeweller Lacloche’s reputation – not only was the brand known across the Channel in Britain, but it was clearly seen as a worthy competitor to Cartier and known for its enchanting cigarette cases. But what was Lacloche? Why did it disappear and what caused its downfall?

Little would have been known about this maison, one of Paris’ most celebrated jewellery houses from the Belle Époche period to the 1960s, were it not for the efforts of both journalist Laurence Mouillefarine, who co-authored the tome Lacloche Joailliers, and L’école School of Jewelry Arts, which pushed to put Lacloche back in the minds of the general public by putting together a monographic exhibition showcasing the technical prowess and impeccable taste of its high jewellery before its demise in 1960s.

“It’s the mission of L’École to welcome the public to discover unknown stories behind the arts of jewellery, from antiquity to contemporary artists and throughout the world,” says Elise Pon-Gonnet, managing director of L’École Asia Pacific. “The house of Lacloche is one of these secrets, marking jewellery history that we wish to share.”

While no archive was kept and no monograph was dedicated to the maison particularly, we do know is that Lacloche Frères, and later Jacques Lacloche, created jewellery for royals and Hollywood stars. “Their creativity was acknowledged by a Grand Prix at the important 1925 International Exhibition of Modern Decorative and Industrial Arts in Paris,” says Pon-Gonnet. “Maison Lacloche was a landmark for artistic innovation and avant-garde designs.”

Léopold and Jules Lacloche, the elder two sons of a Belgian textile merchant, set off to Paris to make their fortune as jewellery traders and founding Lacloche Frères in 1892 on rue de Châteaudun in the ninth district. By way of fortuitous marriages, aligning themselves with other well-known jewellers at the time such as Gompers, and rapid expansions to tourist towns in France, Madrid and London, the brothers’ name and reputations grew, drawing a prestigious clientele of cosmopolitan bourgeoisie and members of royalty.

In France, they were next-door neighbours to Cartier and perfumer Guerlain on the lavish rue de la Paix. In London, their shop occupied a spot on prestigious New Bond Street. The jewellers were always ahead of the curve, standing at the forefront of aesthetic trends that gripped society from the fin de siècle to the Roaring Twenties, and from the naturalism of Art Nouveau, by way of Egyptomania and a penchant for the Far East, to Art Deco. Their jewellery, clocks and vanity cases – a speciality of Lacloche – were seen as some of the most fashionable items one could carry.

Says Pon-Gonnet: “The Lacloche jewellery creations mark milestones of feminine style and elegance, with a close relationship to couture and to the position of women in society. In the 1920s, when boyish hairstyles are in fashion, pendant earrings are of choice. Ladies now smoke cigarettes carry ornamented cases. And when corsets and sleeves disappeared, sautoirs and bangle bracelets would become part of the ornate outfits.”

But Lacloche’s fortunes were cut short in 1931, neither through mismanagement nor the recession of two years previously. “The 1929 stock-market crash had a terrible impact on Lacloche’s customers’ finances, even ruining them,” explains Mouillefarine. “But the downfall for Lacloche was more unusual: the firm’s owner, and above all one of his sons, suffered from an addiction: gambling. The fortune they left on the casino tables was so huge that it sank their entire company.”

Later, Jacques Lacloche Junior, who was trained by his uncles in the family jewellery business, continued the family name by setting up his own business. The Lacloche name, revived, continued to dazzle members of royalty, as well as figures in fashion and beauty. The business thrived, but Jacques’ interests did not – by 1960s, he’d become passionate about contemporary art and, in 1967, he decided to close the jewellery store to turn his attention to the world of design.

The Lacloche Parisian Jewelers 1892-1967 exhibition at L’École, currently running at the Hong Kong campus until April 6, wouldn’t have come to life were it not for journalist and exhibition curator Mouillefarine, who’s known for her studies into art and history of jewellery, and who co-authored Lacloche Joailliers, the starting point of the exhibition.

She tells me she first discovered Lacloche Frères and Jacques Lacloche pieces in auction catalogues and books on jewellery, but realised that little of their history had been recorded. After reading all she could in magazines and reports of the period, she eventually also got to know Francis Lacloche, Jacques’ son, who provided more helpful details about the family.

“I find fascinating the fact that three brothers who came from a modest background in Belgium managed to develop one of the most prestigious Paris jewellery companies,” says Mouillefarine. “A success story. With a sad end.”

According to Mouillefarine, the archives all but disappeared when Lacloche Frères’ stock and premises were sold at auction in 1932 and 1933. Research to put together the book almost surmounted to detective work, frustrating Mouillefarine so much that she entertained the idea of giving up, until she discovered a small catalogue that gave her a second clue.

“We found the catalogue of a retrospective held by the Musée des Arts Décoratifs in Paris, in 1976, which commemorated – amazingly a year late – the 50th anniversary of the 1925 exhibition,” says Mouillefarine. “It was a very tiny, tiny catalogue with a few lines regarding Lacloche Frères, but it mentioned the presence of two gouache albums: one representing 22 clocks and the second, with 63 jewels and accessories.

“It seemed that as souvenirs of this major event, Fernand Lacloche had two albums made to illustrate the creations he presented in 1925. Each piece is painted in gouache and described in handwriting,” says Mouillefarine. “How eloquent these documents could be if we could find them! At once I launched myself on a treasure hunt to find these unique books.”

It took two years. Finding the two gouache albums proved to be a small miracle. “After Jacques Lacloche had lent the albums to the Paris Musée des Arts Décoratifs in 1976, he dispersed them at an auction in Saint-Moritz in Switzerland. They sprung up in the United States in a private collection,” says Mouillefarine. The books, miraculously, were still intact.

“These documents are so important for the history of jewellery that Van Cleef & Arpels acquired them,” Mouillefarine adds. “Visitors to the L’École exhibition in Hong Kong can see them in a digitalised version, along with the real jewels. It’s very moving.”

Following the book, the next challenge was to find the pieces to put together the L’École exhibition. “It was a challenge, as the jewels had been scattered around the world: America, Europe, the Far East … there’s no collector of Lacloche creations only,” says Mouillefarine.

“People who own Lacloche pieces usually have a passion for French jewellery and try to collect important works signed by famous brands such as Cartier, Chaumet, Maubossin, Van Cleef & Arpels and so on.”

But Mouillefarine’s connections run deep. Having co-curated an exhibition about Art Deco and Avant- Garde jewellery at the Paris Musée des Arts Décoratifs in 2009, she was able to connect with experts, auctioneers and dealers who pointed her in the right direction.

More than 40 pieces of rare jewellery, precious clocks and timepieces, compacts and vanity cases are displayed in Hong Kong, with 11 Lacloche pieces premiering for the first time following the Paris exhibition. Borrowed from collectors all over the world, these pieces are sourced from New York, Geneva, London, Paris and even locally.

The Van Cleef & Arpels name definitely helped convince collectors to lend their treasures, says Mouillefarine. But what she found most encouraging was this: “Some collectors that I got in touch with spontaneously confided in me that Lacloche was their favourite jeweller.

Lacloche, Parisian Jewelers, 1892-1967 runs from now until April 6, 2022 at L’École School of Jewelry Arts at K11 Musea. Following the latest government guidelines, the exhibition is temporarily closed until further notice.