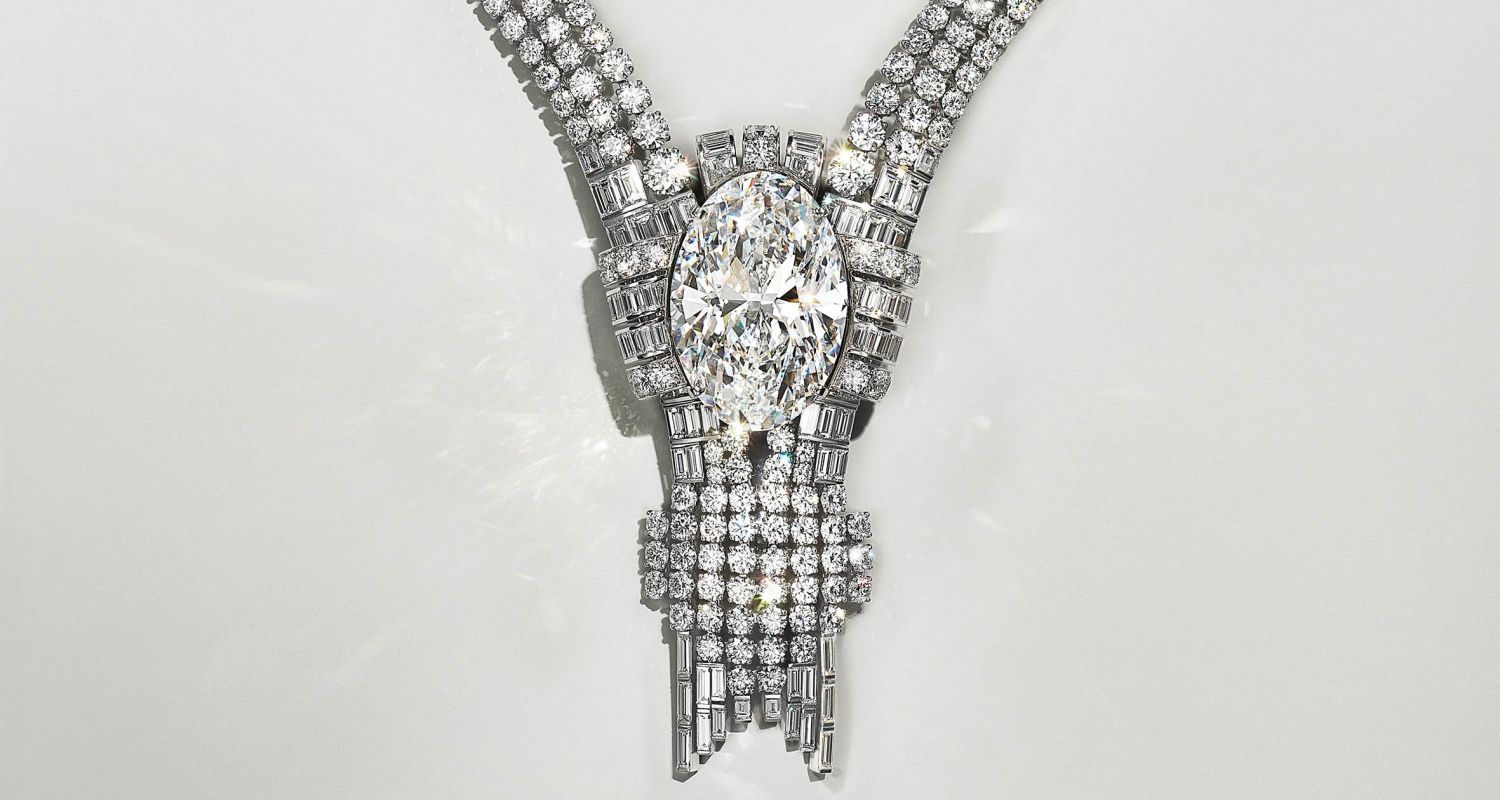 Among the 200 high jewellery creations in Tiffany & Co.’s latest Blue Book Collection is the spectacular 1939 World’s Fair Necklace, reimagined with the dazzling, 80-carat Empire Diamond – the second-most expensive gemstone in the jeweller’s 185-year history. François Oosthuizen talks to Tiffany’s Chief Gemologist, Victoria Reynolds, about the provenance of this exceptional gemstone and the very special necklace.

When Tiffany & Co. announced at the end of last year that its 2021 Blue Book Collection will debut in Dubai – marking the first time for the jeweller to showcase its famed high jewellery collection in the Middle East – there was another surprise in store. The archival 1939 World’s Fair necklace was going to be revealed too – reimagined with the 80-carat D flawless oval-shaped Empire Diamond. The gemstone’s rumoured USD20 million value is only eclipsed by the house’s most famous jewel, the 128.54-carat yellow Tiffany Diamond. The latter gemstone, however, is not for sale, and only brought out on very special occasions.

Asked why Tiffany & Co. decided to reimagine the archival 1939 World’s Fair necklace with the 80-carat Empire Diamond – the original necklace is adorned with a 200-carat aquamarine – Chief Gemologist Victoria Reynolds says the goal was not to replicate the design. “Rather, we wanted to elevate it further by making it even more special as we modernised the necklace. Diamonds are so important to Tiffany’s heritage, so it was clear from the beginning that the reimagined World’s Fair Necklace had to uplift the most exceptional diamond we could acquire: The Empire Diamond.”

According to her, the design has been exceptionally well received. “Our clients have been mesmerised by the diamond’s beauty, elegance and presence, and cannot believe that Mother Nature would have gifted us with something this perfect. The necklace featuring the Empire Diamond is for sale as our most expensive design ever created, second only to the 128.54-carat Tiffany Diamond, which is famously not for sale,” she says.

“The recreation of this historical necklace represents Tiffany’s legacy of innovative jewellery design. An unexpected, added element of ingenuity is that the Empire Diamond can be worn not only in the stunning World’s Fair Necklace, but it can also brilliantly convert into a diamond-encrusted ring in a platinum setting, making it uniquely transformable,” Victoria explains.

“This is a new twist to the original design, which we felt was important, as this element of transformability allows the wearer to adapt it to her personal style and enjoy the diamond in multiple ways. In order to accomplish this transformability, our craftsmen’s incredible skills, as well as modern engineering, were involved.”

The Empire Diamond – an over 80-carat, D-color, internally flawless type IIa oval diamond – is not only exceptionally rare but also a symbol of Tiffany’s approach to diamond traceability, the first in the industry. It was responsibly sourced in Botswana, cut and polished in Israel, and set in New York by master Tiffany craftsmen. The stone was then named in honour of New York, the birthplace of Tiffany & Co. In addition to this dazzling centre stone, the necklace also features over 95 carats of baguette-cut and round-cut brilliant diamonds.

“Yes, it’s true,” adds Victoria, confirming another rumour. “The lucky client who purchases this uniquely transformable design will be bestowed with a lifetime service – a Tiffany jeweller will remain on-call to convert the piece from a necklace to ring, and vice versa.”