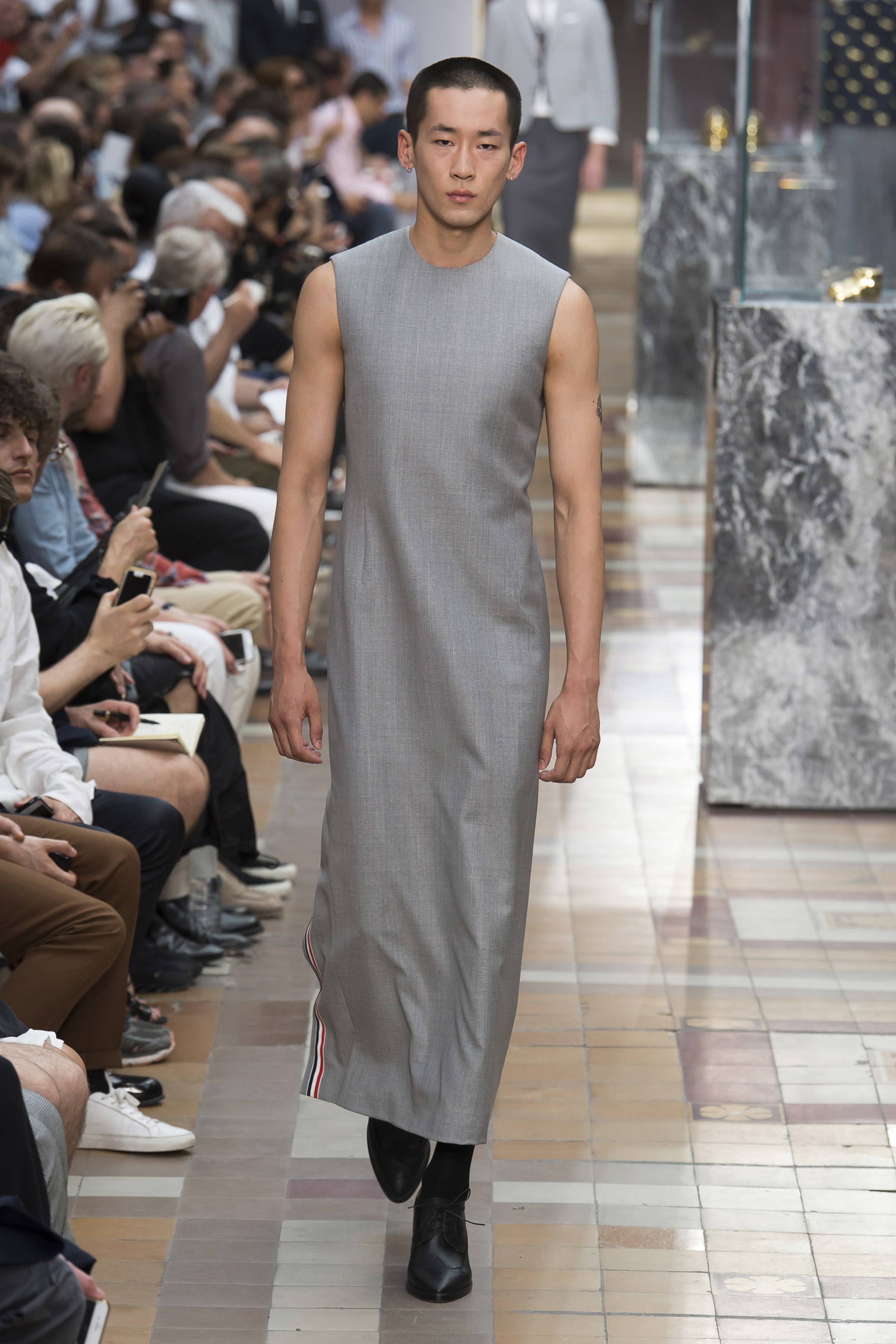 Currently on view at London’s Victoria & Albert Museum, the exhibition Balenciaga: Shaping Fashion is a treasure trove of one-of-a-kind pieces designed by the Spanish couturier. While visiting the show this summer, however, a look that caught my eye was the brainchild of another designer, Jonathan Anderson.

In a section devoted to con-temporary creators influenced by the work of Balenciaga, a frilly-edged romper-meets-dress is displayed alongside outfits by designers as varied as Rei Kawakubo, Nicolas Ghesquière and Simone Rocha. The JW Anderson look (that’s the name of the label he helms; he also acts as creative director at Loewe) is the only men’s outfit in the show and dates back to his autumn/winter 2013 collection. That was famously derided by the British tabloids, which scoffed at the notion that men would dare to wear what was ostensibly a dress.

How things have changed, you would think, when looking at the fashion world right now. Androgyny and gender-fluidity are au courant and you can’t deny that designers such as the aforementioned Anderson and, to a larger extent, Alessandro Michele at Gucci have been instrumental in orchestrating this shift in the perception of what constitutes menswear in the 21st century.

This is all well and good, but only if you look at the men’s collections (which, for brands such as Gucci, now share the runways with their women’s counterparts) and at a tiny subset of fashion fanatics who have the guts to wear – and the tiny frames to fit into – those chiffon pussy-bow blouses that Michele unveiled in his first show for the Florentine house.

Dig deeper and you’ll see that while Gucci is doing brisk business with its menswear, what guys gravitate to are those ubiquitous horse-bit loafers and the more wearable – aka gender-conforming – pieces in Michele’s always-varied offerings, from embroidered bombers to vintage-looking tracksuits.

It’s just another example of the huge disconnect between the spectacle of the catwalk, which now extends to the mayhem outside the shows, and the reality of daily life, in which even men who are unabashedly into fashion and love preening in front of a mirror (or a phone screen) would rather look dapper in a dashing suit or an athletic-inspired ensemble to show off their physiques.

The fashion world loves nothing more than to jump onto a bandwagon, and if the trend du jour calls for men to embrace their inner femininity through a ruffled dress, why not overhype it and make it into the next big thing?

Sometimes, dealing with matters such as gender through the seemingly frivolous lens of fashion can even backfire: look what happened to the US edition of Vogue, when its August cover story starring Zayn Malik and Gigi Hadid referred to the couple’s “gender fluidity”, only because they were styled in men’s and women’s versions of the same looks from brands such as Prada and Gucci, and admitted to borrowing each other’s clothes. Fortunately, Vogue took the high ground and sheepishly apologised.

It would be a welcome change to see men become more adventurous with their everyday get-ups, but the constant success of the drapey and monk-like aesthetic of brands such as Rick Owens shows that this is as far as they’ll go.

Owens and a cadre of Japanese designers have been championing this unisex vibe for years but as the fashion news cycle is always in need of some buzzy new thing, genderless dressing has recently become a hot topic. So don’t hold your breath for a revolution in men’s closets happening any time soon because guys – and especially those who have the spending power that big brands so avidly covet – will likely stick to their tried-and-tested wardrobe staples, no matter what happens on the catwalks of Milan and Paris.

Sign up to get the latest luxury and lifestyle news delivered to your inbox.
Vincenzo la Torre