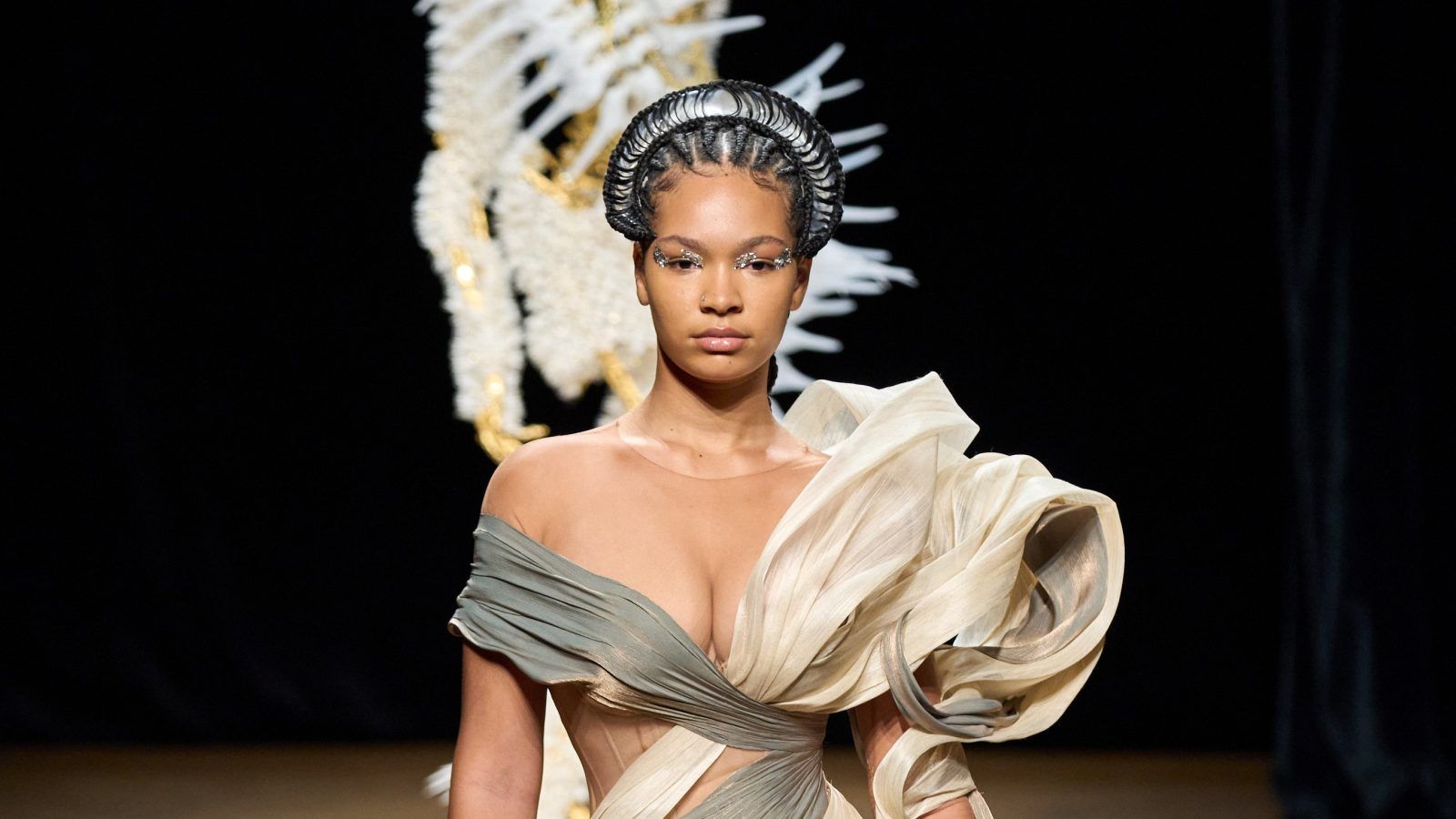 As Autumn/Winter Couture 2022 comes to an end, here’s our selection of the best shows we saw this season.

Historically, Haute Couture week had been the time for socialites to go out, drink, look at clothes and, on occasion, spend a couple of tens of thousands of dollars. Now? Well, it’s evolving. And we, for one, couldn’t be happier seeing skater boys in Valentino and a certain real-estate reality star in Balenciaga.

Daniel Roseberry’s Autumn/Winter 2022 Couture collection for Schiaparelli stood atop a pyramid of inspirations and references – most prominent being Christian Lacroix, or his 1987 debut, influenced by Elsa Schiaparelli herself. The range didn’t possess the all-consuming gilded maximalism of its Spring/Summer 2022 Couture predecessor – instead, it focused on precise tailoring: perfect corset, perfect jacket. The brand’s founding genius was not forgotten. Her legacy strutted down the runway in the shape of the heart detail above a one-breasted bustier in the crimson-red final look, magnificent eye earrings with grapes for lashes that required a metal headband to be held up and, of course, Stephen Jones’s exquisite hats.

Iris Van Herpen’s 15th-anniversary couture collection defied all expectations – as expected. We hear the Dutch couturier drew inspiration from Ovid’s Metamorphoses poem of the eighth century, especially those about Daphne, Arachne and Narcissus. The collection of 16 looks did not merely reimagine some of Van Herpen’s archival pieces (a retrospective in the case of such an anniversary would be quite apt) but strutted forward, employing cutting-edge materials like the banana-raw-silk blend, most prominently featured in the draping of the opening look. The mind-haunting brown bodysuit with sleeves that levitated above the ground was made, nearly entirely, out of the fibres extracted from the shells of cocoa beans.

Maria Grazia Chiuri’s couture sensibilities are, above all, consistent. Drawing inspiration from Ukrainian folk costumes and collaboration with artist Olesia Trofymenko, Chiuri paid homage to life itself. The reserved colour palette of the Autumn/Winter 2022 Couture collection, consisting of white and beige, with occasional bursts of green, yellow and red, created a light and gentle ambiance. A plethora of rich embroidery, elements of Victorian dress, like a jabot motif, as well as shapes echoing Ukrainian sarafan, ranged, in their execution, from literal to surprisingly more abstract. From the very first impression, one could deduce Dior corsetry had become obsolete. In fact, the house’s staple, instead, was transformed into a part of the dirndl dresses.

Unlike her iconic predecessor, Virginie Viard tends to make her collections encapsulate the feeling of evolution – every change – subtle, quiet, and private. Think of it as a more refined version of late Virgil Abloh’s work (if one absolutely must draw comparisons, that is). The show opened with a bright-green tweed two-piece, inspired by the piece Lagerfeld once dressed Inès de Fressange in. Then there were bursts of pink, of course, bleeding into the collection from the well-received Spring 2022 show. Stark novelties – for those yearning to discover any starkness at all – was the sheer black dress in the final portion of the show that boasted a herringbone motif transitioning into a dynamic fishtail.

Alexandre Vauthier’s Autumn/Winter 2022 Couture collection, as its predecessors, continues the proud traditions of avant-garde French couturiers – Mugler, Jean-Paul Gaultier, Yves Saint Laurent. The cyclonic silhouettes that have become a bit of a signature for the house, in silver, black and beige, defined the fantastical nightgowns, balanced by oversized suits and a sheer micro dress. The wide variety of cuts, materials (it was nice to see glossy croc-embossed leather and mink make a comeback) and historical influences (the feather-trimmed slip dress, for example), footwear (boots that seamlessly merged with pants, realized in suede and sequins) dictated the new curl of epochal French cool.

Demna Gvasalia has recently established himself as fashion’s new enfant terrible, no matter whether couture or streetwear are concerned. The Autumn/Winter 2022 Couture collection showed the audience, along with the screaming young fans outside the venue and the squealing social media citizens, the vast and delicious phantasmagoria of Gvasalia’s very own universe. The collection opened with neoprene-enswathed alien-esque characters with glossy shields covering their faces. Then came tweed gowns, followed by some streetwear (as Demna’s homage to – well – himself). The final portion of the collection with revealed faces included a tribute to Cristobal Balenciaga’s iconic silhouettes and some celebrity figures integral to Demna’s vision of the brand.

Pierpaolo Piccioli is among the first designers to embrace menswear in Haute Couture. His approach this season lies within the chimaera of his two identities: self and Valentino, balancing electric colours with extreme sophistication, couture cuts and materials – with an exceptionally diverse cast. Valentino-red suits with large roses upon breasts and thighs mixed in a fantastical whirlwind of purple ruffles, silver glitter (on dress and face), lime-green feathers, mesh and black velvet. Not the most important but, by far, the most fun part of the show was, by far, seeing a pink-haired skater strut down the steps of Trinità dei Monti in a lime-green chiffon gown.