Luxury Watchmaker Blancpain Continues Its Partnership With The Michelin Guide 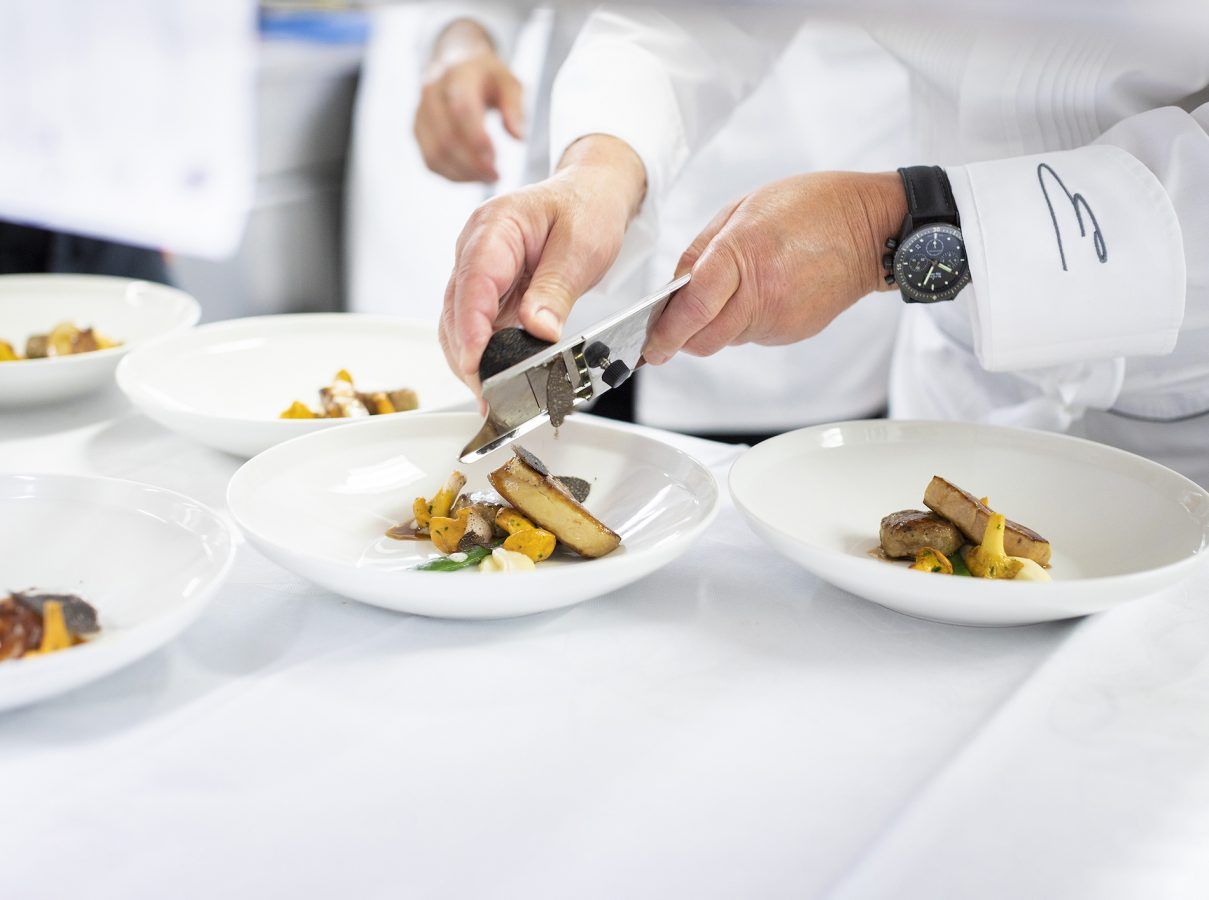 According to that infallible resource of reliable information, Wikipedia, the oldest continually operating company in the world is an Osaka-based construction outfit called Kongō Gumi, which was founded in the year 578 CE. To put that history in perspective, this still-functioning business was set up eight years after the birth of the prophet Mohammed, four years before Emperor Maurice assumed control of the Eastern Roman Empire and around the time that matches were first invented in Chen Dynasty China.

To find the oldest watchmaking company still in business today, however, we must fast forward in time across more than 11 centuries to the year 1735, when one Jehan-Jacques Blancpain set up his workshop in Villeret, a village in the Bernese countryside of Switzerland. Compared to the likes of Kongō Gumi, Blancpain must seem a relative spring chicken, though when one considers that, at the time of its founding, the American colonies were happily still ruled over by Britain and large chunks of the world were depicted in atlases as blank spaces overwritten by the words “terra incognita”, it does render the brand’s 287-year longevity in a somewhat different light.

Just as no timeline lasting almost 300 years will appear as an uninterrupted continuum of progress, that of Blancpain has inevitably involved fits, starts, highs, lows, continuity and change. The company remained in the hands of its founding family for just three years shy of two centuries: in 1815, under Jehan-Jacques’ grandson Frédéric-Louis, the old workshops producing one-off timepieces were upgraded to an industrial undertaking permitting the serial production of watches. At the same time, Blancpain also introduced a new form of cylinder escapement. Around 15 years later, Frédéric-Louis embarked on the construction of a new factory, the biggest of its kind in Villeret, which along with the development of high-quality products helped ensure the company’s survival against tough global competition in the second half of the 19th century.

In the late 1920s, Blancpain tied up with the English watchmaker John Harwood, who’d developed a self-winding mechanism for a wristwatch several years before that introduced by Rolex; indeed, the latter was forced to admit that fact in a subsequent advertisement acknowledging the Briton’s invention. But when shortly afterwards, in 1932, Blancpain’s seventh-generation leader Frédéric-Emile died without a family successor, the company was taken over by his former assistant Betty Fiechter, who not only remained in charge (along with her nephew Jean-Jacques from 1950) for the next 38 years but was also the first woman to head a leading Swiss watch brand.

It was under the Fiechters that several key milestones were reached. Among them, shortly after Jean-Jacques’ arrival, was the introduction of the Blancpain Fifty Fathoms at the 1953 Basel watch fair, which sprang from his new-found passion for recreational scuba diving and, with its unidirectional rotating bezel, established the key design tropes for dive watches that are still followed by almost every manufacturer today. Further adding to the watch’s credibility as a professional tool was its early adoption as an official combat timepiece by the frogmen of the French navy, as well as by the oceanographer Jacques Cousteau, who at that time was probably the most famous diver in the world.

In those days the Fifty Fathoms was rated water-resistant to a depth of around 91 metres (300 feet); modern versions, which form one of the backbones of Blancpain’s current collection, can submerge to more than three times that depth. In 1956 the Bathyscaphe, named after the submarine vehicle used by the Swiss underwater explorer Jacques Piccard to dive into the Pacific Ocean’s Mariana Trench, was introduced in a smaller size suitable for everyday wear by women as well as men. The same year also saw the release of the first Blancpain Air Command, a pilot’s flyback chronograph initially intended for use by the US Air Force (and using similar case architecture to the Bathyscaphe), of which only a dozen were made.

A further key landmark for the brand was Blancpain’s 1961 merger with the Société Suisse pour l’Industrie Horlogére (SSIH), alongside Omega, Tissot and the movement manufacturer Lemania, after which the company not only produced watches under its own name but also calibres for other brands in the group. Within 10 years, production had increased to levels hitherto unheard of, yet by the early ’80s, with competition from cheaper quartz watches decimating the Swiss watch industry, Blancpain, in common with many other heritage brands, was hanging on for dear life.

Survival came in the persons of watchmakers Jacques Piguet and the young Jean-Claude Biver, who in 1982 bought Blancpain and turned around its fortunes by reviving the traditions of luxury watchmaking, focusing on heritage and craftsmanship, and emphasising the brand’s roots in the 18th and 19th centuries. So successful were their efforts that within 10 years they sold the once-again highly profitable Blancpain to the Société de Microélectronique et d’Horlogerie (SMH), which shortly afterwards was re-named The Swatch Group. Following Biver’s departure 2002, he was replaced by Marc A Hayek, another keen diver, who remains head of the brand today. Almost immediately, Hayek set about re-creating the Fifty Fathoms, which had fallen victim to the quartz crisis.

First, a limited-edition of the watch was released, which was followed by a full-scale revival of the model and, in 2013, the relaunch of the Bathyscaphe. Today’s Fifty Fathoms collection comprises references that come in a range of sizes, case materials, dial colours and complications, the latter including flyback chronographs, complete calendars, an eight-day tourbillon and a GMT, all powered by calibres designed and produced at the Blancpain manufacture at Le Sentier, a village in Switzerland’s watchmaking heartland, the Vallée de Joux.

The latest references in the Bathyscaphe collection comprise a pair of Quantième Complet models, one in red gold with a gradient-blue dial and the other in titanium with an anthracite dial, both featuring a manufacture automatic calibre that powers a traditional complete calendar with moon phases.

As for the Air Command, Blancpain revived the flyback chronograph in 2019, employing a column-wheel calibre with vertical clutch that beats at 5Hz and offering 1/10 th of a second resolution. Originally available in a 42.5mm case, it’s also now offered in a smaller 36.2mm unisex version with a case in either red-gold (a perfect visual complement to the blue dial and leather strap) or titanium.

Along with a long-established commitment to World Ocean Day, which naturally grew out of the pioneering Fifty Fathoms family of watches and Hayek’s abiding concern for the protection of undersea life, Blancpain more recently partnered with the famous Michelin Guide in a wide-ranging three-year association that builds on the brand’s long links with the world of haute cuisine. After all, the painstaking attention-to-detail, knowledge and expertise implicit in both haute horlogerie and haute cuisine are not dissimilar, while Blancpain watches have not only adorned the wrists of the world’s leading chefs for decades, but the house has also provided timekeeping instruments used in various culinary contests over the years.

In 1986, Blancpain presented Swiss chef Frédy Girardet with a specially engraved timepiece to celebrate his award as the World’s Best Chef; since then, other culinary greats to receive such watches have included Paul Bocuse, the late Joël Rubuchon, Martin Berasategui, Edgar Bovier and Julien Royer, all of whose restaurants have received Michelin stars.

This association between Blancpain and Michelin will result in more than 20 events and guides in major cities around the world, including New York, Paris, Shanghai and Tokyo, over the next three years. It brings together two famous names with a common passion and global reputation for fine craftsmanship and quality, and a respect for tradition and terroir.