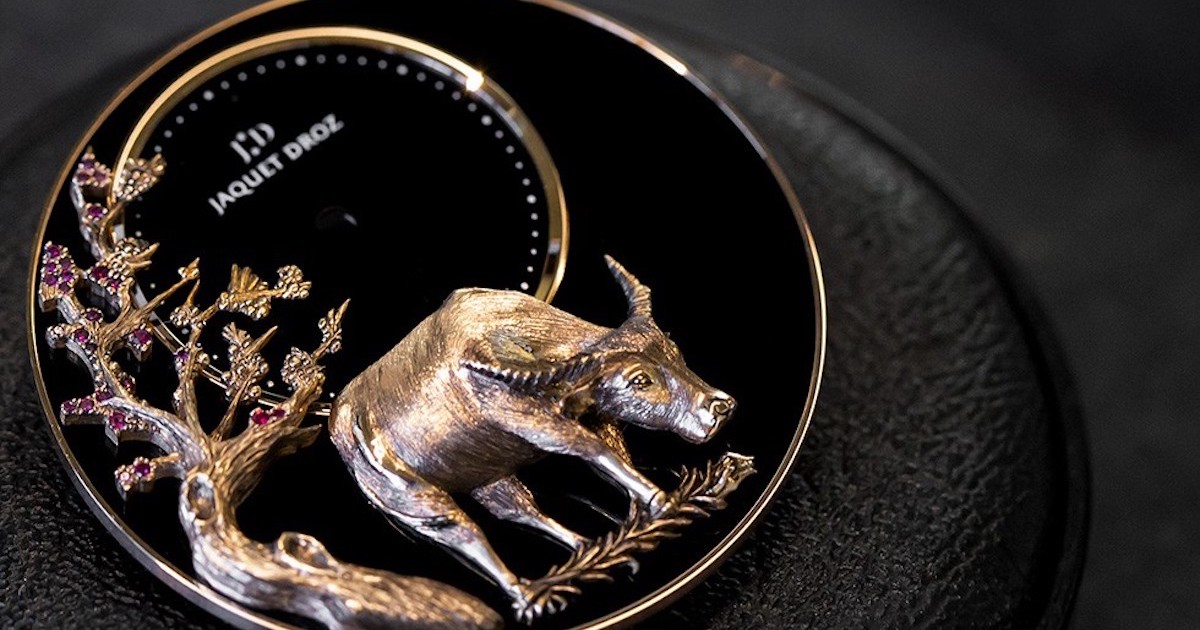 It’s Lunar New Year again, and with it comes the customary drop of special-edition luxury timepieces aimed at East Asian collectors. This time around they’re dedicated to the second zodiacal sign – that of the hard-working, dependable, determined, and somewhat conservative bovine, the Ox. So that horologically inspired oxen won’t find sifting through the seasonable offerings a burdensome task, we’ve done the work for them and come up with this propitious selection of ox-inspired watches.

The Swiss maison has created a pair of limited-edition Métier d’Art ox-inspired watches. One is in platinum with a blue dial, but it’s this magnificent specimen in pink gold with a brown dial that best captures the essence of the plodding beast of burden. Not only have the house’s engravers and enamellers replicated the traditional Chinese paper-cutting technique of jianzhi on the grand feu dial, but they also incorporated etched representations of grass and foliage, as well as the engraved image of the animal itself, which is rendered in pink gold. Powered by the Calibre 2460 G4, the watch displays the time via four apertures that show hours, minutes, days and dates, the first two dragged and the last jumping. Only 12 pieces of each model are available.

From the manufacture’s Villeret collection, Blancpain’s Calendrier Chinois Traditionnel comes in an edition of 50 pieces and eschews a large representation of the animal in favour of a tiny silhouette at 12 o’clock. As the name suggests, however, this highly complicated timepiece does feature a full traditional Chinese calendar, with double hour indication, signs of the zodiac, Chinese date and month, indication of the five elements, celestial stems, leap months, Gregorian calendar and moonphases. In a 45mm platinum case with grand feu dial, it’s powered by the Calibre 3638, whose oscillating weight is set with a Madagascan ruby and which provides up to 168 hours of power.

From Breguet’s Lunar New Year offerings, we’ve chosen this ladies’ Reine de Naples 8955 Cammea Year of the Metal Ox, a limited edition of eight pieces that’s presented in a rose-gold case set with 2.8 carats of diamonds. Pride of place goes to the relief-carved cameo dial in white and brown, each made from a specially selected shell, whose engraving — by an Italian father-and-son team — takes some 20 days to complete. The watch is powered by a 537 automatic calibre with platinum rotor and hand guillochage; visible through a caseback sapphire, it provides a reserve of 45 hours. A signature and serial number are engraved in gold at the case base; the owner can also have her name similarly inscribed.

One of two ox-inspired watches from Chopard, the L.U.C XP Urushi Spirit of ShÍ Chen comes in a limited edition of 88 pieces. It’s the first L.U.C watch to display the complete Chinese zodiac, which it does with a new complication that reveals the animals in a slow parade on a rotating Urushi-lacquer disc. The lacquer dial, which is produced by the century-old Japanese company Yamada Heiando, also incorporates the symbol of prosperity and the god Lu Xing. In a 40mm ethical rose-gold case, the watch is powered by the automatic L.U.C 96.29-L calibre, a variant of the manufacture’s existing 96 movement that incorporates the zodiac complication and measures just 3.97mm thick.

The Lunar New Year offering from Harry Winston comes in the form of this ladies’ Premier Chinese New Year Ox Automatic 36mm, which displays the image of a jewelled bovine on a dial of bright red beaded mother-of-pearl and white mother-of-pearl, with waved decor, 105 brilliant-cut diamonds and a single emerald-cut diamond of 0.06 carats. In a jewel-set rose-gold case, the watch features a total of 174 brilliant-cut diamonds that weigh 2.74 carats. It displays hours and minutes in an offset dial at 12 o’clock, draws power from the HW2014 automatic calibre and is available in a limited edition of eight pieces.

The annual Lunar New Year watch release from Piaget comes in the guise of this ultra-thin Altiplano Year of the Ox in a 38mm white-gold case, with 0.71 carats of brilliant-cut diamonds on the bezel and a grand feu cloisonné enamel dial by master enameller Anita Porchet. Using a technique dating back four millennia, Porchet created miniature gold partitions (cloisons) on the dial, into which she placed the enamel pigments; the dial was then fired and varnished. The watch is powered by the hand-wound 430P calibre, which measures just 2.1mm thick; it’s presented on a black leather strap.

To mark the Lunar New Year of the Ox, Jaquet Droz has produced three ox-inspired watches in its Ateliers d’Art collection, each showcasing two artisanal techniques. Shown here is the Petite Heure Minute Relief Buffalo in a 41mm red-gold case, which is available in a limited-edition of just eight pieces. The dial depicts hand-engraved and hand-painted buffalo and tree relief appliqués in red gold, with 27 rubies adorning the latter. With hours and minutes displayed in a large off-centred dial at 12 o’clock, the timepiece is powered by a 2653 automatic movement with red-gold oscillating weight and a hand-painted buffalo appliqué in 22k red gold, which provides a reserve of 68 hours.