By Yanni Tan and Allyson Klass 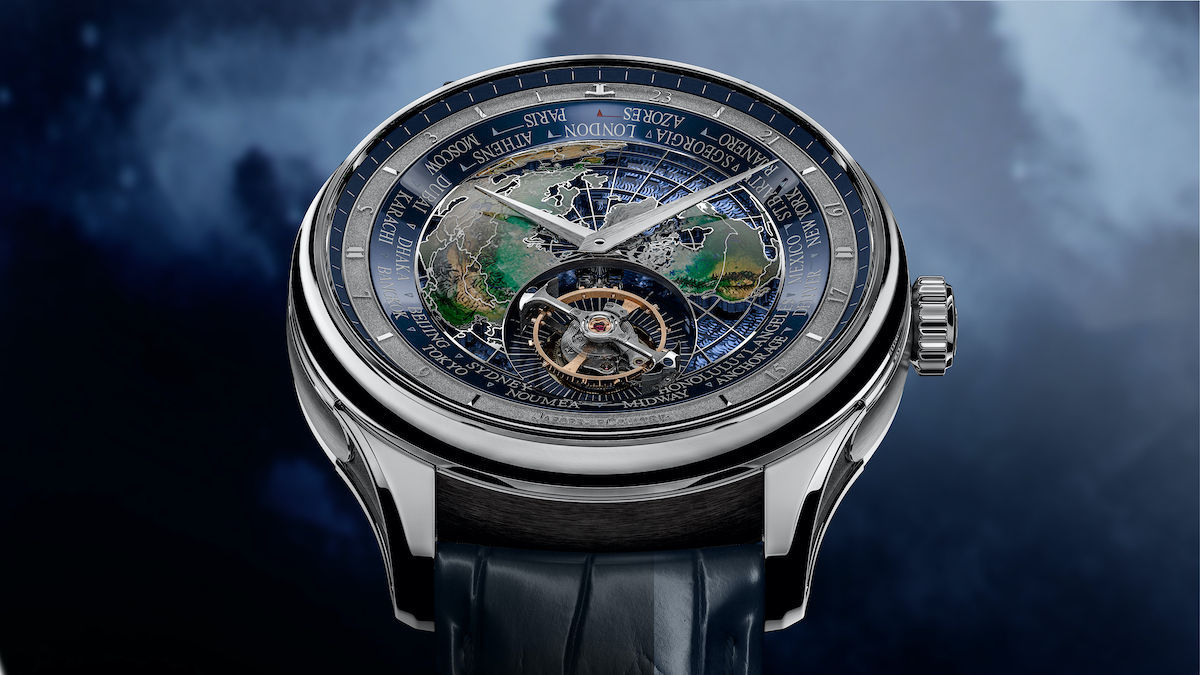 Technical brilliance and utmost finesse in traditional craftsmanship define the three novelties by the Swiss manufacture.

At its centre, in keeping with world-timer tradition, is a map of the world as seen from the North Pole. It floats above the dial bed on a domed skeleton formed by the longitudes and latitudes of the Northern Hemisphere. The enamelling of a single dome requires 55 hours of work. Measuring just 25.5mm in diameter, each dial is a remarkable miniature artwork requiring almost 70 hours of work. Representing the oceans, the dial bed is a disc of vivid blue translucent lacquer applied over a wavy guilloché pattern. In circular aperture to one side of the map, the flying tourbillon appears to float weightlessly above the blue oceans, spinning in 60 seconds.

Each time zone is represented by the name of a city, arranged in a ring around the central dial. Set outside the city ring are two concentric fixed rings: a 24-hour indicator and a minute track laser-engraved on a ring of blue lacquer. Mimicking the rotation of earth on its axis, the domed earth map – together with the Universal Tourbillon and city ring – makes a complete 360-degree revolution in 24 hours, always indicating the right time in each city.

Demonstrating its expertise in celestial complications, Jaeger-LeCoultre reinterprets its Grande Complication Calibre 945 with two magnificent new 45mm interpretations for 2022: Master Hybris Artistica Calibre 945 Galaxia in pink gold and Master Hybris Artistica Calibre 945 Atomium in white gold – each offered in a limited edition of five pieces. Originally created in 2010, Calibre 945 unites a sky chart with a celestial vault, a zodiacal calendar and a minute repeater, and is further elevated by Jaeger-LeCoultre’s Cosmotourbillon – a celestial flying tourbillon.

The astronomical aspect of time measurement is showcased by a manufacture-developed mechanism displaying the passing of sidereal time, based on the stars. Set at the centre of the dial, the celestial vault maps the Northern Hemisphere night sky as seen from the 46th parallel – the latitude of Jaeger- LeCoultre’s home in the Vallée de Joux – tracking the position of the constellations in real time. Enhancing this celestial display is the Cosmotourbillon, which makes a complete, anti-clockwise circuit of the dial in one sidereal day.

Doing justice to the exceptional movement is the stupendous artistic expression seen on the Master Hybris Artistica Galaxia and Master Hybris Artistica Atomium. For the star map, Jaeger-LeCoultre introduces grisaille enamel to its repertoire for the first time to depict with utmost artistry the night sky. The dials are constructed on multiple levels, dominated by a domed structure that also wraps around the Cosmotourbillon.

“The second iteration of the Jaeger-LeCoultre Master Hybris Artistica Calibre 945.”

This exceptional timepiece also takes Jaeger-LeCoultre’s expertise in chiming watches to new heights by uniting the astronomical complications with a minute repeater. The house’s continuing quest for the ideal sound has produced several patented innovations, including crystal gongs, trebuchet hammers and a silent governor. In the minute repeater mechanism of Calibre 945, these inventions contribute a special magic that complements the romance of celestial timekeeping.

The new Rendez-Vous Star recreates the mesmerising celestial phenomenon of shooting stairs on the wrist, thanks to an entirely new mechanism conceived and developed within the manufacture. Activated by the movement of the wrist, the shooting star appears on the dial at random moments – usually four to six times per hour. The star may also be summoned on demand by turning the crown several times. The 36mm creation is offered in two variations: a white gold case with a dial in subtle tones of silvery blue and a pink gold case with a dial in soft golden browns.

“The Jaeger-LeCoultre Rendez-Vous Dazzling Star for ladies features a new complication in which a shooting star randomly appears, depending on the wearer’s movement. The function is also available on demand as shown here.”

The beauty and mystery of the night sky is the work of Jaeger-LeCoultre’s Métiers Rares atelier. Made of transparent sapphire glass, the uppermost of the dial’s three layers has been sprinkled with transferred stars and miniature hand-painted (on both sides of the sapphire glass) with clouds and a crescent moon, which conceal the shooting star when it is inactive.

Beneath this is a rotating circular disc of titanium with a cut-out of the shooting star – in an intense night blue for the white gold version and in a dark taupe colour for the pink gold version. When activated, the disc spins, sending the star on its curving path across the upper dial. As it passes, the cut-out reveals the deepest layer of the dial – a fixed disc of silvery or golden metal with a glowing gradient finish that accentuates the sense of movement. Defining the trajectory of the shooting star, a three-quarter circle of diamonds is set into the sapphire glass dial. The bezel is set with a circle of glittering diamonds, and in keeping with the aesthetic codes of the Rendez-Vous, the upper surfaces of the lugs, and the top of the crown are also diamond-set.

Jaeger-LeCoultre has also developed the new in-house automatic calibre 734, which incorporates the new shooting star mechanism – an unprecedented feat of capturing a random cosmic phenomenon in a watchmaking complication. Uniting this technical acumen with the maison’s artistic prowess, the Rendez-Vous Star gives poetic and whimsical expression to the enchantment of the night sky.

“The Jaeger-LeCoultre Polaris Perpetual Calendar with an interchangeable bracelet.”