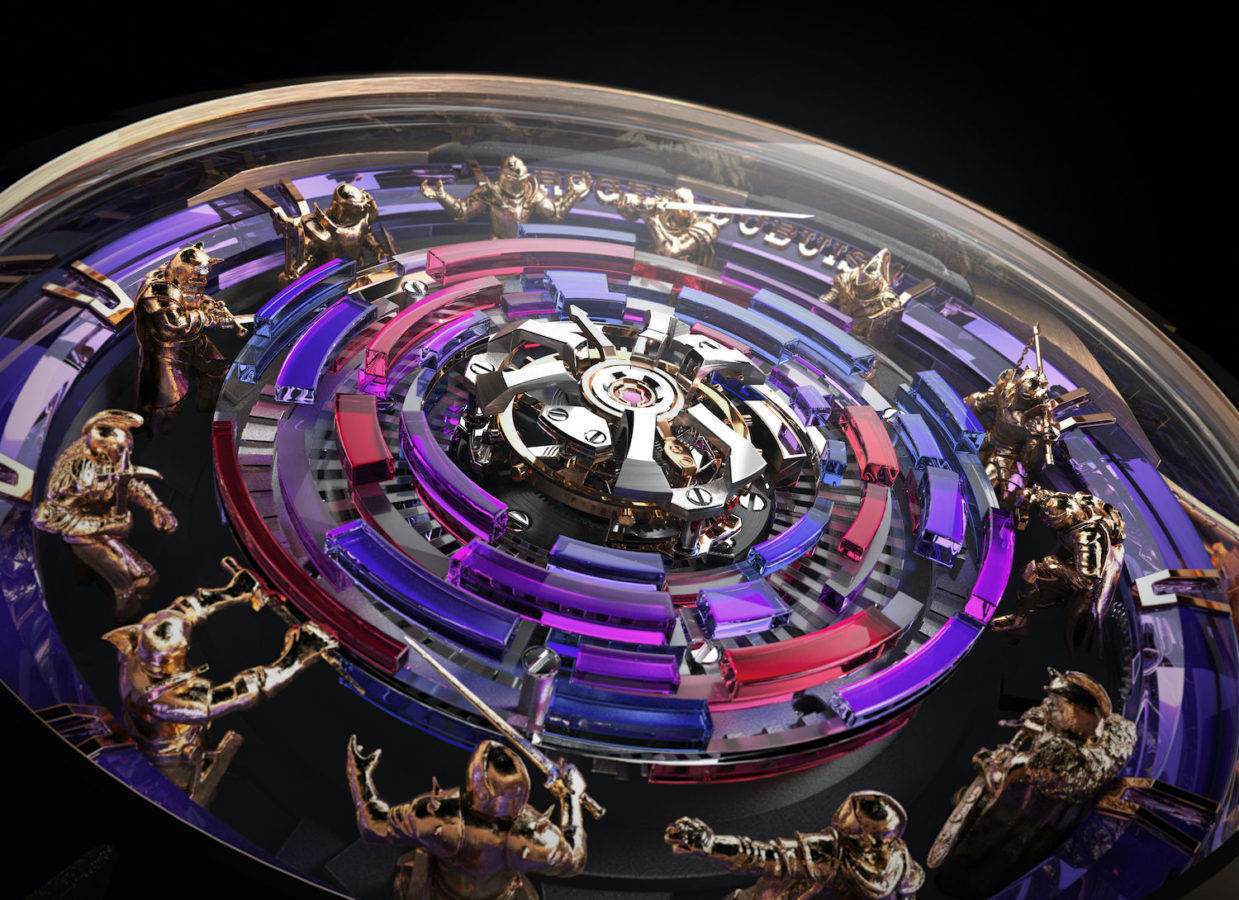 Determined to mark the physical return of Watches & Wonders with outstanding masterpieces, Roger Dubuis continues to elevate its art and technical mastery to new heights.

Right on par with the watchmaker’s reputation for bending boundaries, breaking rules, and reinventing the game – underscored by hyper-technical expertise, expressive design and constantly challenging itself to go further – the ground-breaking Knights of the Round Table Monotourbillon/X timepiece, as well as a remarkable evolution of the Excalibur Monobalancier, make their appearance.

Knights of the Round Table Monotourbillon/X

One of Roger Dubuis’ most iconic, bold and breathtaking collections, each edition of the Knights of the Round Table re-interprets the legend through the lens of “hyper horology”, combining artistic mastery, horological craftsmanship and contemporary design. This year, for the first time, the invisible force of gravity has been incorporated – thanks to a secret device of the Monotourbillon.

Displaying true technical prowess, the Monotourbillon emerges from the centre of the timepiece in a powerful demonstration of advanced mechanics. Becoming the shield against the gravitational force endangering the heroes and precision alike, the knights stand proudly around this iconic feat of engineering, knowing they will tackle their common invisible enemy together. Just as the 12 knights take their duty to protect the realm seriously, the Maison’s quest for peak performance is realised by expanding the diameter of the balance wheel to increase stability and ensure the movement is less sensitive to the effects of gravity.

Defending horological mastery from the threat of gravity is no easy task for the hour-marked heroes cast in pink gold and crafted individually through micro-sculpturing. Small enough to fit in a timepiece but mighty enough to represent the commitment, passion and boldness Roger Dubuis is known for, each knight is just 6mm tall, created with his own personality and equipped with armour.

Such an exceptional timepiece had to feature equally exceptional hands, fully integrated into the circular design. Two gold markers were chosen to indicate the position of the minute and hour with perfectly centered rotating discs. Translucent purple blocks carved from Murano glass appear to levitate around the Monotourbillon, while the double surfaced flange is carved from a single block of Murano glass, too. To realise this effect, playing with no less than eight layers of décor around the dial was needed – a true marvel, considering the limited surface area. In keeping with the design, and to respect the position of the knight at 3 o’clock, the setting system is decentered to a position at 2 o’clock. Push down on this function and a small red flag indicates that the timepiece has moved from winding to setting mode. Available in a 45mm pink gold 750/1000 case sealed by a notched bezel, the timepiece is completed with an embossed black calf-leather strap.

The latest in the evolution of the Excalibur collection is the new Monobalancier, enhanced with a series of mechanical and aesthetic improvements that has given birth to a sophisticated creation of contemporary flair.

Performance is pushed to its maximum for the new RD 720SQ calibre with technical developments designed to increase the power reserve to 72 hours. Meanwhile, the micro-rotor is optimised to minimise its vibrations, and crafted from pink gold 750/1000 and tungsten, finished with an engraving of the Roger Dubuis’ monogram to modernise its design.

The Maison continuously seeks solutions for better performance and precision, too – hence doubling the balance wheel inertia to improve stability and make it less sensitive to shocks. In the same way, better efficiency and energy transmission is achieved by optimising the shape of the escapement wheel, now constructed from diamond-coated silicon, and paired with adjustable, diamond-coated silicon pallet-stones, as well as a new lube.

The new Excalibur Monobalancier is designed with clean cut lines, fluted bezel and sharp notches, while the signature star is reshaped to levitate freely above the barrel. A contemporary approach is further evident in the decorations amplifying the expressive nature of this 42mm timepiece, including highly contrasted decorations such as sand-blasted, satin-brushed surfaces, together with polished angles.

All images courtesy of Roger Dubuis.