People may be travelling less — or not at all — but the hotel industry remains innovative, with several properties taking the opportunity to raise standards and revamp offerings aimed at both travellers and local clientele. We find out what’s new at Hong Kong’s old guard.

There are many instances when words in different languages don’t necessarily carry the same meaning and this is particularly true for the word “crisis”. In English, it means a period of intense difficulty but the Chinese characters – wei ji – translate as danger and opportunity. It’s a telling sign of this city’s mentality from all perspectives: consumers are still spending – now more so than ever – on fine dining, rare wines, unique experiences and staycations. New properties are still in the pipeline and, for the more established hotels, the time for an overhaul is now.

Walking into many local hotels today, you’d hardly suspect they’ve been impacted at all. People still queue
up for afternoon teas at lobby cafes; there are month-long waitlists for top hotel fine-dining restaurants and staycations are still very much sought after. We might be short on overseas travellers but there are so many of us here in the city who used to travel regularly and are now taking the opportunity to discover Hong Kong’s hospitality scene for ourselves. And what an exciting time to do so, with the Four Seasons Hotel Hong Kong and Island Shangri-La transforming themselves with newly renovated rooms and experiences, while the Mandarin Oriental Hong Kong and the Upper House have gutted out dining rooms to bring us brand new food-and-beverage concepts. 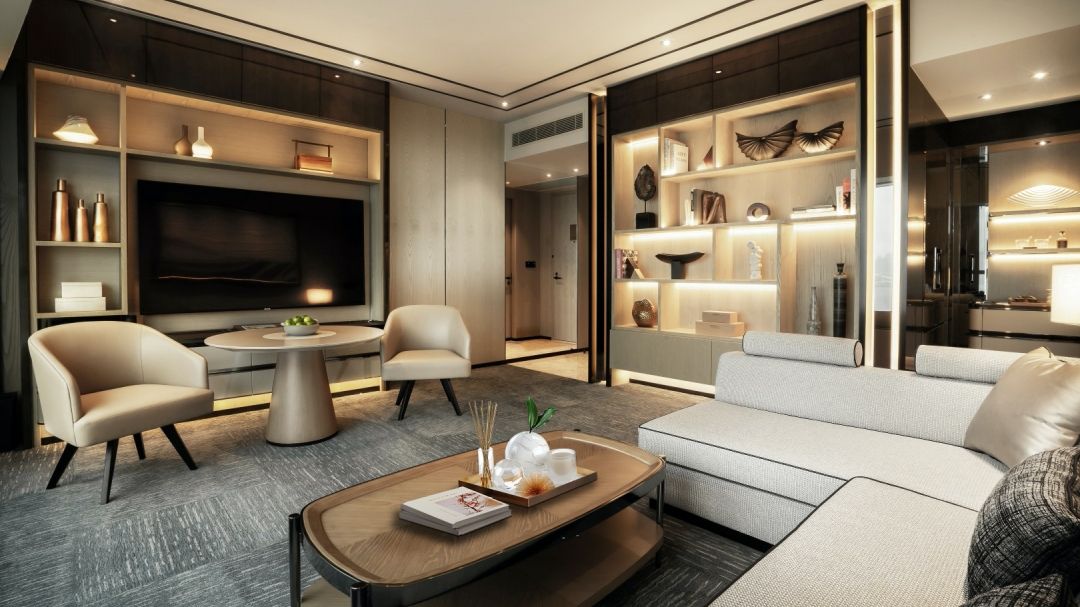 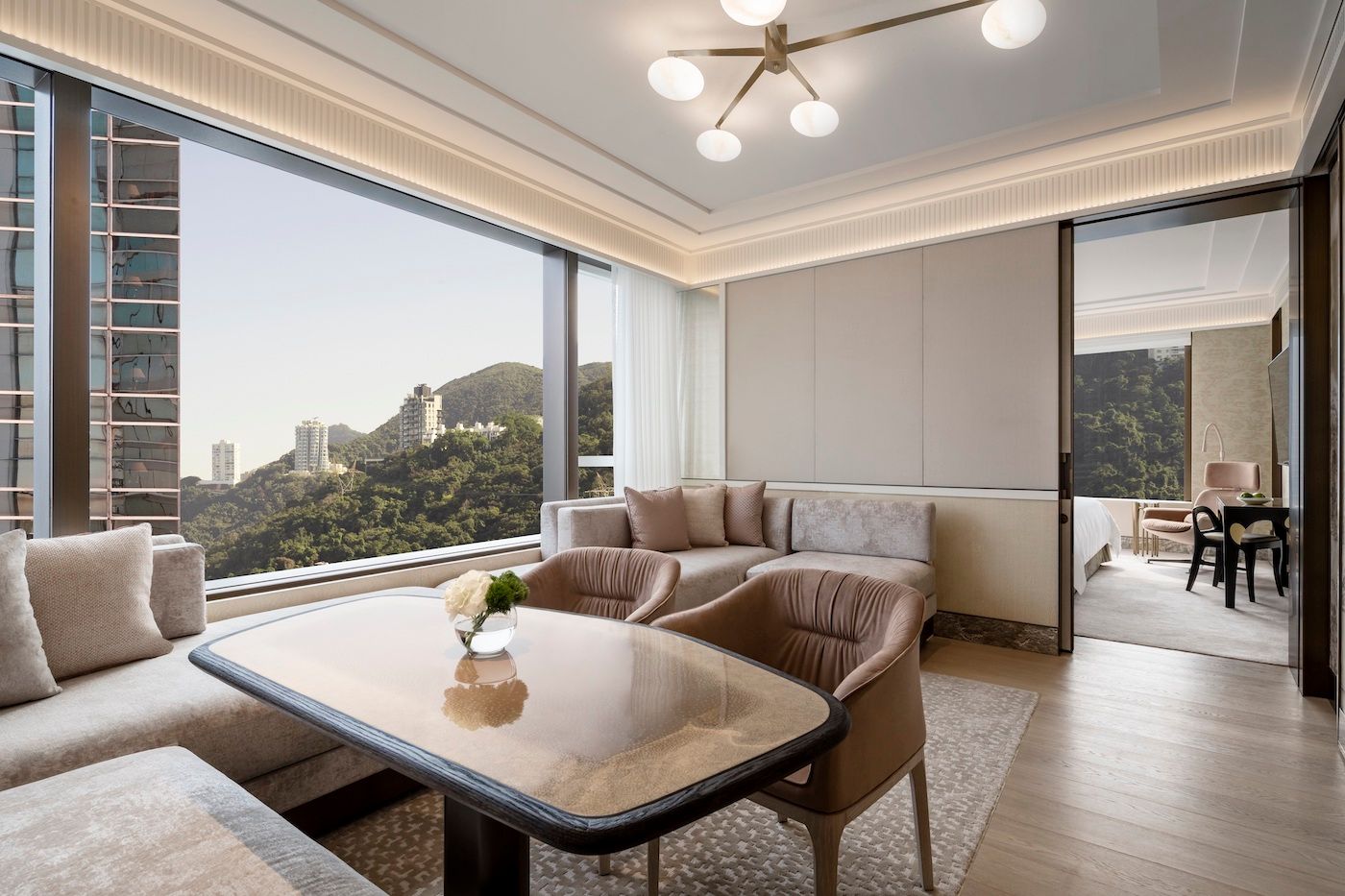 The Four Seasons has just completed the second phase of its transformation, with newly renovated rooms and suites, and two new F&B concepts. The first major renovation project since the hotel opened in 2005, it was a momentous occasion.

To bring the vision to life, Four Seasons enlisted the help of two Hong Kong-based international design firms. AB Concept was in charge of creating a new lobby for the Four Seasons, as well as designing the new Gallery café and Argo bar, an exciting new offering helmed by Lorenzo Antinori. Remedios Studio took over the responsibility for overhauling the accommodation.

For Ed Ng, co-founder and principal of AB Concept, defining the vibe of a hotel starts from the entrance.
A bespoke set of nine pendant lights at the door brings a new warmth to the area. The seating area is also raised to better define the flow of the lobby. What really caught our eyes, however, is the new café Gallery, with its handmade floating crystal sculpture by Czech glassmakers Lasvit, providing diners with a sense of privacy without obstructing the view of the bustling lobby. “We saw this as an opportunity to create a new hub in the heart of the financial district of Hong Kong for both business and leisure meetings where guests can enjoy the lobby’s spaciousness and an abundance of daylight,” says Ng.

As for Argo, Ng says it was one of the toughest briefs he’s ever been given, as the space had to cater for breakfast, lunch, afternoon tea and happy hour, right through to nightcaps. AB Concept took a neo-classical approach with a conservatory concept, the highlight of which is the bar area, a structural column that extends to the ceiling, like a church organ, where the pipes would open up to reveal the rarefied spirits that are housed within.

“I always feel the backdrop wall of a bar needs to be a focal point,” explains Ng. “In its previous incarnation, the bar was situated at the far end against a wall, but I always thought that Victoria Harbour is the perfect backdrop, so we used a structural column in front of the large windows as a form to host the bar itself, with the stunning harbour view behind.”

According to Ng, the shift in hotel design post-pandemic is not so much a physical change but rather
a psychological one, as people move towards casual comfort, rather than white-glove luxury. “This pandemic has made it official, proving that formality doesn’t translate to a high standard of luxury or even productivity,” says Ng.

This vision of new luxury is shared by Peter Remedios of Remedios Studio, the firm behind the Four Seasons’ new rooms and suites. Remedios found himself particularly drawn to the design philosophy and silhouettes from the Ming Dynasty, calling that period “the highest form of furniture design in all of China”.

“As a designer, if you take a Ming piece and you try to simplify it, you’ll find that you probably can’t, without losing the character,” says Remedios. “It’s very pared down to the essence of what creates its look. And that’s actually my philosophy at Remedios Studio: how do you create something that captures just the essence, nothing superfluous? We don’t need to overdo the look. I think that’s how to achieve a timeless elegance.

In his redesign, Remedios felt strongly about embracing Chinese values as part of the design, though in a way that’s sophisticated and instinctive. “You don’t create a pastiche of something that looks Chinese, because that’s kind of silly,” says Remedios. “I don’t like the notion of Hong Kong being East meets West.”

Instead, Hong Kong was about old meets new, brand-new buildings next to heritage sites, a juxtaposition that Remedios has thoughtfully put into every room and suite. Traditional Chinese landscape paintings are incorporated into wardrobe doors, and patterns inspired by vernacular Chinese architecture are used on the alcove, with glassware and porcelain carefully placed on open shelving that mimics classic Ming furniture. The “new” comes in the form of contemporary designs like the chaise longue and the dining table in the living room, the bar that lights up like a beautiful jewellery display, and the tech – indispensable light controls, coffee machines and other things that make us feel at ease.

The Island Shangri-La too, is undergoing the second phase of its renovation project, which will see more room redesigns and an improved Horizon Club lounge. So far, the hotel has renovated three floors for its Horizon Club rooms and suites, comfortable and spacious rooms in neutral palettes that frame the views of the harbour. The new rooms are built with the needs of the modern-day traveller in mind and enhanced to provide a sense of space that can be adapted to guest needs, from elegant day beds to multi-functional in-room pantries and versatile desk tables that can serve as both for dining and as a meeting table.

Helming the rooms’ redesign is renowned French interior designer Tristan Auer, who has married understated style with old-world elegance, an aesthetic that’s always been a characteristic of the Island Shangri- La. It’s hard to miss the 16-storey-high landscape silk painting, Great Motherland of China, that dominates the atrium of the hotel. Said to be the largest silk painting in the world and a wonderful piece of heritage, the work is in full view for all staying guests.

Island Shangri-La’s beloved restaurants Petrus and Lobster Bar remain relatively untouched, however, spearheaded by the acclaimed Uwe Opocensky, who’s now executive chef for Shangri-La hotels. Along with Petrus’ head chef Romain Dupeyre, Opocensky has reinvented the French fine-dining restaurant’s classic dishes and given them all a refreshing and contemporary twist, while the restaurant space retains its ornate old-world charm.

Just a stone’s throw away from Island Shangri-La, the Upper House has gone for something else entirely. After 10 years of success with Café Gray Deluxe, the hotel closed down the space as part of its ongoing evolution and reopened with Salisterra, a Mediterranean-focused restaurant that highlights sustainable creations, utilising bold and bright vegetables, chargrilled meats and fish, and hand-made pasta, created by London-based chef Jun Tanaka and chef de cuisine Chris Czerwinski.

And instead of revamping its rooms, the hotel has redesigned a single suite only, renaming it the André Fu Suite in tribute to the original architect of the hotel and housing his latest collection of decor, homeware and tableware. The suite was designed as a space in which guests can be sociable and relax, and allows for private and more intimate events, which couldn’t have come at a better time than now. There’s a dining table that seats 18 and is serviced by the Salisterra team and a dedicated spa area with twin massage beds.

Done up in Fu’s signature palette of neutrals and mineral-blue tones, the room is a soothing oasis in which to rejuvenate or to entertain. Fu was inspired by Japanese Zen gardens, a theme that’s prominent in both the suite and his latest André Fu Living collection. In a previous interview, he told us that the juxtaposition of Art Deco patterns and Japanese Zen gardens is a cross-cultural aspect that he’s experimenting with at the moment.

Salisterra, however, is a bright and vivid evolution, bringing in rich colours of terracotta orange, mud burgundy, mineral blue, dusty turquoise and golden caramel. The design is mid-century and geometric, incorporating a large five-metre-high chandelier made with more than 80 glowing glass lanterns in the main room. One of our favourite areas is the bar lounge, nicknamed the “green room”, which brings in furnishings in high-gloss racing-green lacquer and vivid Pevla stone.

General manager Kristina Snaith-Lense says that the hotel is constantly refreshing and innovating its space
to enrich the guest experience. “The plan to create a new dining experience at Level 49 and the André Fu Suite had actually been in the pipeline for some time and weren’t a result of the pandemic,” she says.

The local clientele has always been an important segment for the boutique hotel, and working with homegrown brands and local ambassadors has long been part of the mission. “If anything, Covid-19 has reinforced the importance of those relationships with old and new friends,” says Snaith-Lense. The Upper House has a constant rotation of local F&B concepts in the lobby, such as Matchali, Cookie Department, Teakha and Mother Pearl, and has also converted a guest room into a fitness studio, where workouts with local fitness personalities are held.

We can’t speak about hotel transformations without touching on the Mandarin Oriental, which has also completely revamped its restaurant offerings, closing Pierre to make way for a renewed Man Wah, its time-honoured Chinese restaurant and the Aubrey, an eccentric Japanese izakaya in collaboration with Maximal Concepts. The Aubrey has made a buzz and quickly become a top spot in the city for drinks and quick bites, but unique experiences keep on coming. The Aubrey’s bar programme is managed by Devender Sehgal, who has recently created the Omakase Cocktail Bar, a drinks-led experience that puts lesser-known liquors and sparkling sake at the forefront, paired with light snacks for a truly rarefied experience.

New rooms, new restaurants and bars, new experiences – crisis or not, it’s an exciting time to be in hospitality.