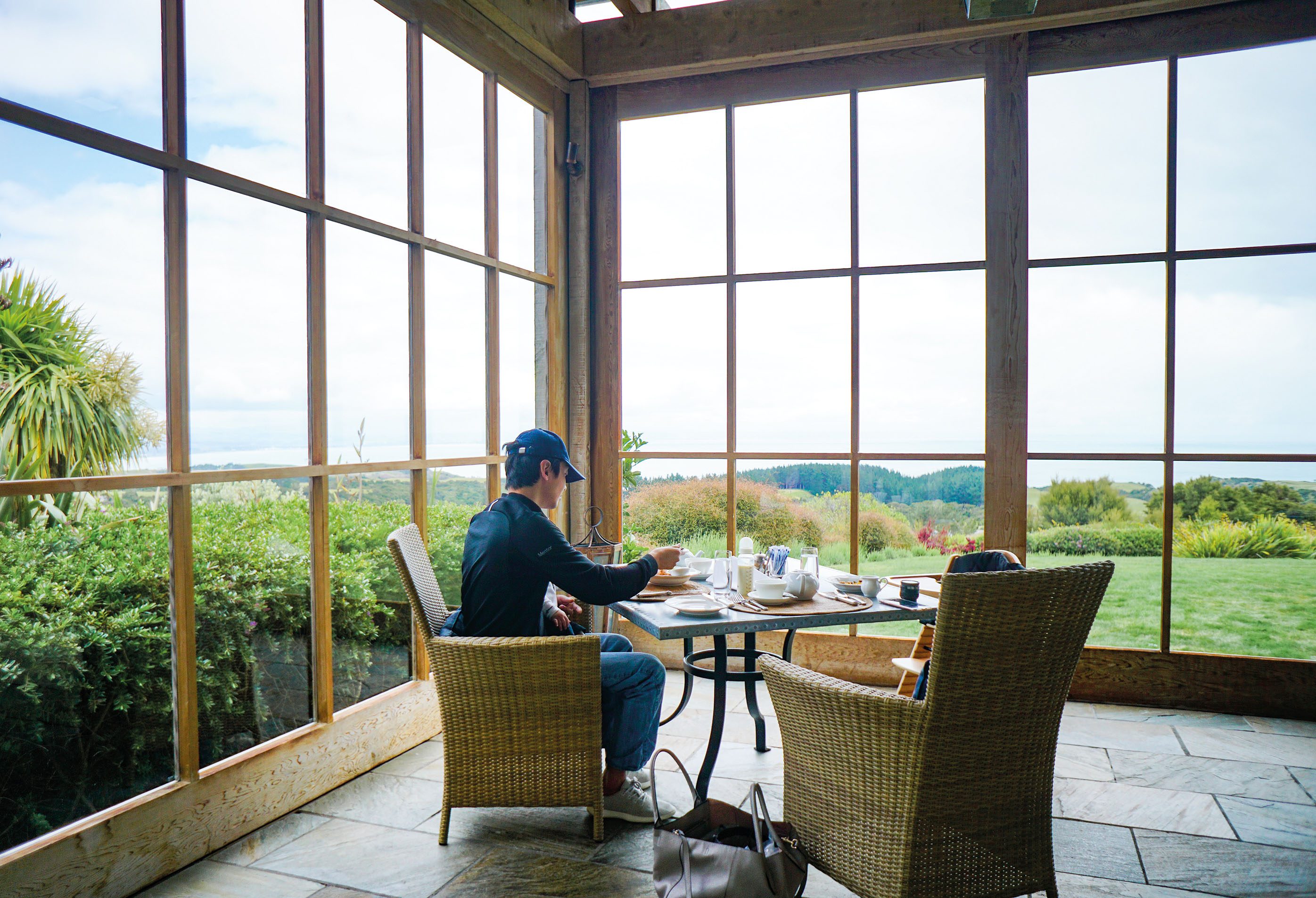 “There are more sheep than people in New Zealand.” Although I had heard the quote only once, it helped shape my impression of New Zealand — an endless horizon of shades of green pasture converging with shades of blue sky, vast rolling green hills, and a flock of black and white sheep atop these hills.

As it turns out, New Zealand is exactly how I’d pictured it, and so much more. I visited New Zealand’s North Island during the balmy days of spring in November, with husband and baby boy in tow. Weighed down by work and motherhood, I’d entrusted the planning of our holiday to Scott Dunn, a travel agency that prides itself on immaculate itineraries (with the best spots to stay, visit and dine) to make travel effortless.

Auckland, the largest city in Polynesia, is modern without being built-up, cosmopolitan but not unfriendly, and buzzy yet laid-back. Its beautiful harbour is the reason it is also known as the City of Sails, and from the wharf you can sail into one of the array of islands in the gulf. Waiheke Island, for instance, is a 30-min ferry-ride away, and welcomes travellers with luxury lodges, lovely white-sand beaches, as well as gourmet cuisine and wine.

Its fresh produce and culinary excellence make Auckland an excellent gateway to our New Zealand’s North Island adventure, and one good reason to sample a key restaurant or two.

Our accommodation in Auckland was St Marys Residence, a luxury lodge in a quiet suburb with terrace views of the harbour from its rooftop balcony. It is the brainchild of Singaporean export Manjit Kaur and her husband Michael Coutts, and they have lavished the property with effort and exquisite attention to detail, working with interior designer Anna Desbonnets to remodel it into a four-bedroom luxury villa (furnished in Hamptons chic-style, no less).

The villa’s general manager, Craig, is also butler and concierge, while private chef Finn, who seemed far too qualified to be cooking just for us, used to head up a Relais & Châteaux kitchen. We’d have stayed in for every meal, but other restaurants in Auckland beckoned. Such as quintessential fine dining destination The French Café, which serves fresh, light and beautiful modern New Zealand gastronomy in its bright and charming space.

The Sugar Club, a restaurant atop the iconic Sky Tower, is where celebrity chef Peter Gordon whips up his accoladed cuisine that fuses Asian and European culinary styles. The glass-enclosed dining room offers fabulous views of the harbour and sea beyond.

Auckland gave us a first glimpse of the gourmet gastronomy we were about to experience as we traversed New Zealand’s North Island. We set off southwards in the direction of Lake Taupo. The scenic drive was flanked by wide open fields, lush green hills and the occasional flock of sheep — as I had pictured!

Two hours after leaving Auckland, we stopped at Hobbiton and entered the entirely separate universe that is Middle Earth. Here we were led to The Shire in The Lord of the Rings, where hobbit holes are carved into the hillside with hobbit-sized laundry hanging outside the round windows. Time your visit for dinner at The Green Dragon Inn, and you’ll be treated to a magical banquet in the thatch-roofed, lantern-lit tavern, feasting on plum puddings and stews, and drinking Southfarthing Sackville ciders and Middle Earth concoctions.

Moving southwards from Hobbiton, we arrived at Lake Taupo. This vast body of water (the largest in Australasia) is a volcanic lake birthed from a fiery eruption that would have clouded the sky with dark ash all the way to Asia. For centuries past, the lake has inspired countless Maori myths and legends. Today, it draws visitors from the globe over, and a lakeside town has developed to accommodate tourists seeking adventure and outdoor pursuits such as trout fishing to jet-boating.

Running from the lake is the rushing Waikato River, and on its bank sits the Huka Lodge. This fabled destination is one of New Zealand’s original luxury lodges, and may well have defined the entire genre, inspiring similarly spectacular lodges that sprouted up across Kiwiland.

In its 80 years of existence, Huka Lodge has played host to royalty and celebrities, as testified by framed photos of guests that line the oakwood consoles of its welcoming lounge. It is still the epitome of elegant, understated luxury in Kiwi hospitality.

Huka’s rooms, suites and cottages dot the river bank. Whitewashed cabins with high wood-beamed ceilings and white shuttered glass panels open straight to the river bank, so you can pick up a fishing rod from reception and go fly-fishing outside your room’s patio. Since it was raining, however, all we cared for was to stay ensconced in our lodge, tucked under a tartan wool throw or soaking in the enormous bathtub with its own white panelled window that looks out to the thick forest foliage.

However indolent the lodge made us feel, we knew dinner was worth getting out of bed for. Huka turned dining into an experience, with no less than 20 quirky locations across the property designated as dining spots. There was a vaulted underground wine cellar that glowed with the light from dozens of pillar candles; a wooden jetty pavilion perched right on the very edge of the river bank; an outdoor “green room” with walls of clipped hedge and views of the waters, as well as garden dining under the stars. For our little family, the lodge set a table in front of the fire in the library, a cosy, private books-lined sanctuary, with a small patio overlooking the Waikato.

Huka Lodge’s commitment to dining excellence has created a legacy and reputation that executive chef Paul Froggatt now continues. He takes his experience from some of the finest kitchens in Europe and Asia, including Bernard Loiseau’s three-Michelin-starred Burgundy restaurant. Every night he prepares a new five-course degustation menu featuring the freshest seasonal ingredients (sometimes personally foraged by his team), cooked to perfection and plated beautifully. One meal may be a poached lobster in saffron, another a kingfish tataki in a buttermilk and strawberry bouillon, or a Te Pohue rabbit with kumquat chutney. All reflect Froggatt’s refined culinary skills and international influence.

Huka Lodge is a most wonderful base for the myriad of adventures in the region. On the property are tennis, pétanque, swimming and fishing, while further afield on the lake there’s jet-boating, waterskiing and whitewater rafting. If you need a rush of adrenaline, ask about bungee jump or skydive. Helicopters land in the front lawn to take you flightseeing (or to your next destination).

We decided to go gliding at the Taupo Gliding Club. In what was the closest to flying a plane without a pilot licence, we were popped into the front seat of a glider, which was hooked up by a rope to a propeller plane that pulled us up thousands of feet into the air and let us go. And we soared, gently down, down, down, over the spectacular landscape of mountain, lake and sea below. It was exhilarating and enthralling all at once.

It was hard to imagine that New Zealand’s North Island would have more to offer after that but we were happily proven wrong as we ventured southward to Hawke’s Bay. As we drove down the highway, we watched in joy as rolling green hills with their grazing sheep gave way to vineyards, sea cliffs and the ocean.

For oenophiles and epicures, a trip to New Zealand is never complete without the wineries of Hawke’s Bay, which produce almost all of the country’s finest reds. Makers of wine tend to be lovers of food, so some of the best wineries come with the best restaurants.

The well-known Craggy Range wines are paired with locally sourced delicacies at the winery’s award-winning fine diner Terrôir. Nearby, Elephant Hill winery accentuates the fine dining and wine tasting experience with breathtaking views — courtesy of a reflecting pool with vineyards stretching beyond, Kidnapper Cliffs and the Pacific Ocean.

The majestic Kidnapper Cliffs are part of a 6,000-hectare peninsula of farmland, nature reserve and ocean cliffs. Captain Cook landed there once, and had one of his Tahitian ship-boys almost kidnapped by a Hawke’s Bay Maori, hence the name. The nature here is wild and breathtaking, and probably unchanged since the 1700s, with the exception of The Farm at Cape Kidnappers, a luxury lodge perched on top of the headlands.

The place was so secluded we almost could not find it. When the road we were on ended at Clifton Beach, we were left puzzled for a while. Fortunately we noticed the gate and sign that marked the entrance to the 2,400-hectare private-owned property — thereafter it was a good half-hour’s drive up a winding road before the pretty white facade of the lodge materialised.

Breathtaking. That was the word that came to mind when we arrived at Cape Kidnappers. Owned by an American hedge fund billionaire, this unassuming Cape Cod-style farmhouse is a glorious hideaway brimming with every pampering nicety. Our suite in the main house, with its white wood-panelled walls and rustic-chic furnishings, had a delightful little bay window to curl up by, and a reading chaise by the fireplace. When we swung open the glass doors to the private balcony, we were immediately greeted by a gorgeous view of the valley and ocean beyond.

The affable Matt from the farm next door brings guests on safari-like tours, either in a 4WD or the Can-Am, an open-top off-road vehicle that can navigate the wildest of terrains. Cape Kidnappers is a working farm, so cows are grazing in the fields, and in the evening sheep get rounded up by energetic sheepdogs. It’s also a nature preserve with its own kiwi bird conservation project. We visited its gannet colony, where hundreds of these endangered creatures lay nesting by the edge of the cliff.

With a setting like this, dining at the Farm was an extraordinary experience. Dinner was a five-course degustation event, imbued with formality due to a dinner jacket policy. The Relais & Châteaux  kitchen sent out dishes prepared with local produce, mostly harvested from the lodge’s farm and garden. The food was paired with our favourite Hawke’s Bay wine discovered during the pre-dinner wine tasting-and-canapés session.

In the morning, my favourite spot for breakfast was on the loggia, a beautiful light-filled glass-covered balcony that overlooked the ocean. I saw rolling green hills against a blue sky, and the occasional black and white sheep atop the hill. I peered further, and made out the rugged, open sea cliffs and white-waved Pacific Ocean stretching into the horizon, beautiful beyond my imagination. Indeed, New Zealand was just as I’d imagined, and so much more.

All photos are by Elaine Kim and Miz Watanabe unless otherwise stated.