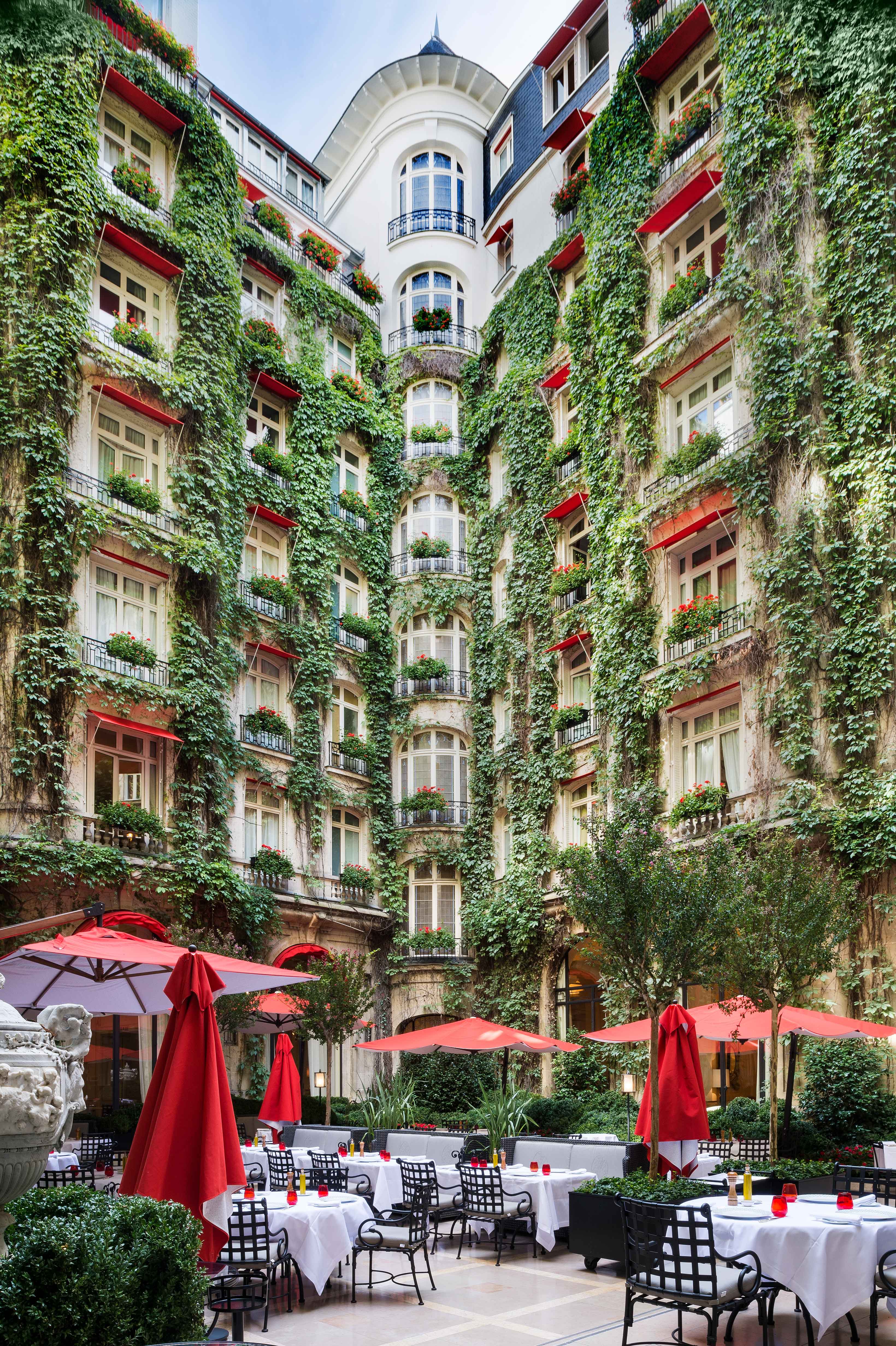 Why You Must Visit Plaza Athénée At Least Once

Blinking a little in confusion before hastily responding, “Non, merci beaucoup,” I close the heavy door to my suite and stand in the white-walled, gold-framed corridor for a few seconds before it sinks in that guests actually do have their cases unpacked by the staff at the Hotel Plaza Athénée.

I tell my travel partner, who seems entirely unfazed and then points out that we did, after all, just walk through a perfumed foyer that welcomed us with glittering chandeliers, soft carpeting and perfectly uniformed check-in staff, many of whose cherry-red-lacquered nails matched the rows of crimson geraniums that decorate the exterior of this Parisian institution, which was refurbished in 2014.

Not only that, but as our check-in was being processed, we were also escorted to La Galerie, a gleaming marbled corridor with archways to block off more private nooks and crannies, to be served tea while we waited. The passageway is punctuated with soft furnishings recalling the hotel’s Belle Époque origins, and palatial windows framing the climbing vines that circumnavigate La Cour Jardin restaurant. It was almost impossible to refrain from forsaking my Plaza Blend and financier to photograph the lush curling green tendrils against the windows’ red awnings.

But refrain I did, mostly because I was trying to blend in with the clientele, among whom was a family of four, whose small children were dressed in immaculately pressed frocks. At other tables were obvious regulars who’d popped in for a mid-morning tea break, their necks festooned with pearls, their hair and nails immaculately groomed, and their Hermès bags resting casually to the side.

Its clientele has always been a part of the Plaza Athénée’s enduring appeal; the hotel has hosted innumerable globally celebrated figures, and the walls of its powder-pink corridor, which leads to the suite lifts and the famous brasserie Le Relais Plaza by Alain Ducasse, groan under the weight and number of framed and signed photographs – everyone from Grace Kelly to Jackie Kennedy, Sofia Loren to Marlene Dietrich, and Christian Dior to – of course – his protégé Yves Saint Laurent.

Having survived world wars and social upheavals, the Plaza’s durability is a testament to its status as a pinnacle of luxury. Dior opened his first maison on the Avenue Montaigne so he could be close to the hotel’s good food, generous bar and glittering clientele. In fact, he designed the now-celebrated Bar Dress at the Plaza Athénée Bar, which has now been redecorated to reflect the property’s enduring association with haute couture.

So strong is this association – everybody from Anna Wintour to Vera Wang stays at this grande dame – that television’s ode to fashion, also known as HBO’s Sex and the City, ended its sixth and final series in Paris. Here in the city, the fashion-obsessed protagonist Carrie Bradshaw stayed and found love at the Plaza Athénée.

With its unrestricted view to the Eiffel Tower, the hotel seems to have attracted countless lovebirds over the years, among them Elizabeth Taylor and Richard Burton, who took up residence for six months with an entourage that occupied several rooms. If there were ever a hotel to call home while making you feel as if you own the world, this is surely it.

While Paris is infamous for its postage-stamp-size hotel rooms, all accommodations at the Plaza Athénée are, at minimum, cavernous. Every suite has a separate bedroom and living room unified with a single colour scheme; ours is pink. During the day we have only pipes and walls to look out on from the window (there are, however, some coveted Eiffel Tower-view rooms, for a small supplement), but it’s in the evening that the suite comes to life in all its homey cosiness.

With its heavy pink damask curtains drawn shut and warm lights agleam, the Haussmanian apartment becomes a haven to return to after a day’s traipsing around the city. The hotel provides Alain Ducasse champagne and a crumbly lemon loaf that does a magnificent job of proving why Parisian pastry is nonpareil. Combined with a very well stocked bar (a hotel such as this refuses to demean itself with something so prosaic as “mini”), the suite becomes a perfect spot for entertaining friends pre- or post-dinner.

The food cannot go unmentioned. Each morning we skip breakfasting in bed for a full American in the glittering surrounds of the three-Michelin-star Alain Ducasse au Plaza Athénée restaurant. Guests are greeted with an incredible profusion of Viennoiserie alongside a choice of cereals and yoghurts, all sourced locally by Ducasse himself. Eggs are prepared in myriad ways: I choose a confection of mushroom, avocado and smoked salmon on toast. The danger of gorging on such a heavenly spread so early in the day is that it leaves no room for lunch, but we decide to live life on the edge and wipe our plates clean.

Fortunately, the hotel’s location offers opportunity aplenty to walk off even the most lavish feast. Standing as it does just a stone’s throw from such landmarks as the Champs-Elysées, the Tuileries Garden, the Louvre and Rue Saint Honoré, the Plaza Athénée is not only at the very heart of Paris itself, but also at ground zero of the fashion world – and that link with haute couture remains central.

My love for fashion turns a casual stroll around the nearby shops into an extreme sport. Between slipping in and out of jumpers and dresses, and trying on boots, loafers and stilettos, a whole day passes. Before we know it, our legs are weary and in need of respite.

We head straight back to our room and toss our fatigued bodies on to the couches. An hour or so passes and then we traipse back down to fill now-hungry tummies. On the way out, we pass by the staircase leading down to the Dior Institut. Since its most recent refurbishment, a new link with one of the hotel’s most devoted patrons now occupies the basement. This temple of wellness and beauty offers an exhaustive spa menu that runs the gamut from facials to body treatments with which to rejuvenate tired guests like ourselves.

We don’t have time to sample the magical hands of its therapists this time around, but as we head towards the lobby and a group of women with glowing faces advances up the steps towards us, we know we’ll be back next time for a treatment – or ten.

Sign up to get the latest luxury and lifestyle news delivered to your inbox.
Fashion hotel Plaza Athenee Dorchester Collection
Zaneta Cheng
Fashion & Features Editor
Zaneta started her career in fashion journalism at British independent magazine Tank after realising a masters degree in Shakespeare gave her more anxiety than joy. Having honed her eye and predilection for new and emerging fashion talent she returned to Hong Kong in the hopes of uncovering fashion talent across Asia whilst shedding new light on establishment favourites. She writes across fashion, travel, culture, jewellery and wellness. When she’s not working, she’s either online shopping, reading Joan Didion or pretending she doesn’t drink but surreptitiously reaching for some ice cold Belle Époque.
Fashion culture high jewellery Design travel