Penang, Past and Present

It’s not clear when Penang was first called “The Pearl of the Orient”, not to mention whether this title has ever been exclusive to the island. Before it was bestowed upon Penang, the “Pearl” belonged to both Manila and Hong Kong at different points in time. But there’s perhaps no place better suited to carry the burden of such a label. Centuries of diaspora and colonial rule have transformed Malaysia’s flourishing island in the Andaman into a melting pot unlike any other. And as a pearl’s value is tied to its age, Penang’s distinction is likewise linked to its heritage.

Penang – its UNESCO-recognised Georgetown, in particular – is now basking in the glow of global attention. New restaurants, bars and boutiques, as well as revamps of some of the longest-standing heritage properties, have given the island another layer of intrigue, propelling Penang onto the radar of luxury travellers around the world.

For centuries, Chinese and Portuguese voyagers had used the island as a pit stop before venturing onward through the Straits of Malacca. But it wasn’t until the late 1700s that Penang received its first foreign settlers.

In exchange for protection from the Burmese and Siamese armies, both of which were bearing down on the sultanate known as Kedah, Sultan Abdullah Mukarram Shah conceded Penang to the British East India Company, agreeing to terms with Captain Francis Light. In 1786, Light hoisted the Union Jack on behalf of Great Britain, officially placing the island under English possession.

Unbeknownst to the Sultan and Light’s superiors, however, the captain had gone rogue to swing the deal; no British protection was ever provided to Kedah, and the Malays lacked the military might to take the island back from its wily captors.

From that pivotal moment, the culture of the island would enter uncharted waters.

Light turned the colony into a free port, siphoning trade from the Dutch East Indies and consequently opening the floodgates for immigrant traders. Many laid down roots in Georgetown, including the Peranakan, the Straits-born Chinese better known as Baba-Nyonya (Baba meaning “men” and Nyonya “women” in their dialect), the community that would become perhaps most emblematic of diversity and heritage in Penang. 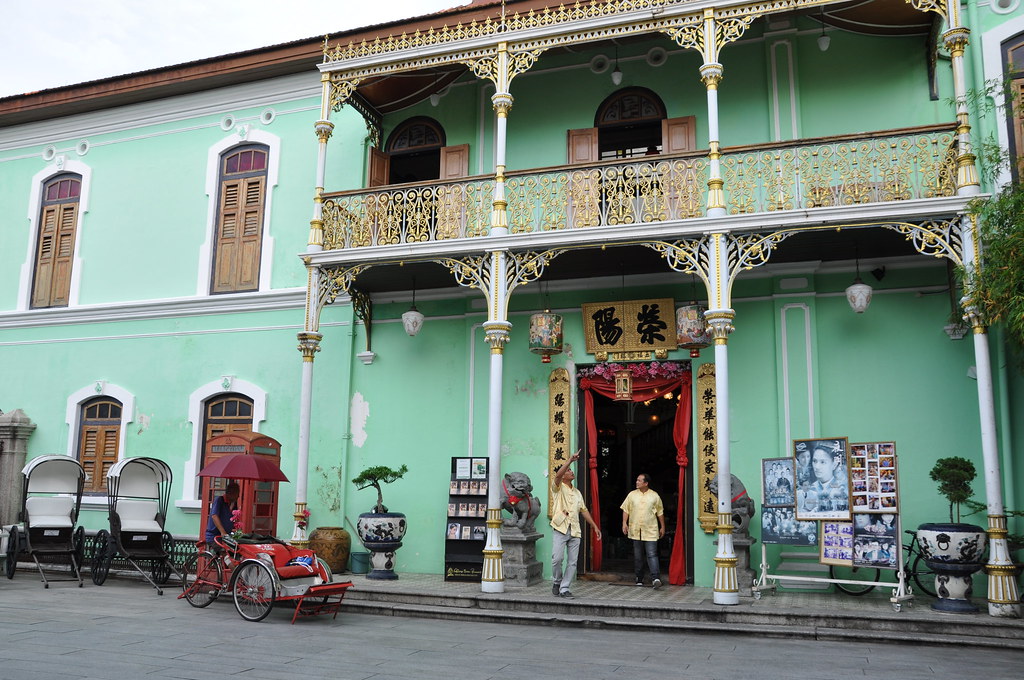 When the Suez Canal was completed in 1869, world trade routes subsequently expanded and Penang garnered even greater attention from foreigners looking to cash in on the eastern frontier. Portuguese, Tamil, Sindhi, Germans, Acehnese, Armenians, Burmese, Chinese and more formed communities, laying the foundation for the one-of-a-kind cultural, culinary and architectural dynamic that endures today.

As impossible as it may seem in this day and age, Jews, Muslims, Confucians, Christians, Hindus and Buddhists all lived – and still live – in relative harmony in Georgetown. Key to this unique achievement was Light’s decree that “each race has a right to preserve its civil and religious peculiarities”, betraying more faith in a robust economy than any religion.

A walk down Jalan Masjid Kapitan Keling, aptly nicknamed the “Street of Harmony”, reveals landmarks of the island’s major religions thriving beside one another.

The scent of sandalwood joss sticks fills the distance between this church and The Goddess of Mercy Temple, a mere hundred metres up the road. The temple, built in 1800 to cater to Taoist and Confucianist orders, is one of Penang’s oldest surviving buildings of any kind, and throngs of visitors still pass through its doors each day.

Beside the temple, there’s a small shrine, and it’s not uncommon to see both Indian and Chinese devotees praying here, a nod to the island’s diversity as much as it is an unofficial entry to Little India, just to the east of the Street of Harmony.

In Little India, shops sell saris, silk and spices; hawkers peddle gold bangles and Bollywood beats. The smell is profound and warming, the music as vibrant as the street life. Most remarkable of all, this transportation to another world takes only steps to achieve.

Back on the Street of Harmony, the Sri Maha Mariamman Kovil temple, built in South India’s distinct Dravidian style, is a hotbed of activity for the local Hindu community.

Up the street from this colourful palace of prayer is the Masjid Kapitan Keling, built by Tamil immigrants who also hailed from South India. The mosque is a fascinating structure, architecturally speaking, featuring Moorish arches as well as the more familiar minarets and cupolas.

Slightly further from here stands the Khoo Kongsi clan house, an elaborately ornamented gathering point for what was one of the most powerful Chinese clans in Malaysia during the 19th and early 20th centuries.

All these places represent the best aspects of pluralistic societies, in which different cultures and religions not only coexist, but also influence one another across invisible borders. For that matter, equally noteworthy are the humble shophouse restaurants along the way, where locals of every class and creed congregate over rice and curry.

History and Heritage at the Eastern & Oriental Hotel

The past and present intermingle in more than just monuments. From traditional Baba Nyonya cuisine to cafés, bars and boutique hotels that occupy heritage buildings, the tapestry of life on Penang is woven together like a historical pastiche.

The Eastern & Oriental Hotel on Lebuh Farquhar, founded in 1885 by the famous – or, rather, infamous – Sarkies brothers, has weathered it all, from financial ruin to the decay of war to the wear and tear of more than 100 monsoons. Yet, against the odds, Penang’s grandest property has managed to remain a status symbol throughout it all.

While a Panpuri Organic Spa, a sea-facing infinity pool and all the amenities associated with 21st-century luxury may have been added to the hotel’s profile, the E&O, as it’s commonly called, nevertheless evokes the grandeur of bygone times.

At 1885, the restaurant named for the hotel’s inaugural year, guests can enjoy high tea on starched linens. Here, tradition is so valued, so fundamental to the experience, that the kitchen even makes its own clotted cream and jam for equally homemade scones.

The Heritage Wing houses the Writers Suite, where luminaries such as Somerset Maugham, Hermann Hesse, Joseph Conrad and Noël Coward once stayed. In this section, original fixtures blend in with new additions made to resemble antique luxury items, such as carrara marble floors, claw foot baths and carved Chinese screens from Beijing. While the Waygood Otis cage lift in the Heritage Wing – nearly 100 years old – might appear to be nothing more than decoration, remarkably, it still functions.

Oriental lacquer cabinets and Persian rugs might fool you into thinking the Victory Annexe has existed since the 1800s, but it was only completed in 2001 following years of economic turmoil in Asia. The suites here feel luxuriously new, yet they look every bit as historic as hose in the Heritage Wing.

Even the Sarkies, the Armenian immigrants who went on to found the Raffles Hotel in Singapore and the Strand in Myanmar, play a central role in the hotel’s mystique. Their photos hang on the walls and their names adorn the restaurants and shops. While their poor business practices may have nearly resulted in the E&O’s demise in the 1930s – “forgotten” debts, pricy renovations, lavish parties, gambling – their drive to establish a luxury retreat on Penang is now central to its living legacy.

Rarely do hotels offer so rich a narrative in addition to first-rate facilities and service.

Penang is no longer merely a mecca for street food. While the woks still sizzle from Batu Maung to the white sand beaches of Batu Ferringhi, fine-dining venues across the island are offering increasingly refined takes on local and foreign fare.

For a creative taste of Baba Nyonya cuisine, visit Kebaya at the magnificent Seven Terraces Hotel. In a room decorated with antique furniture, mosaic tile floors and marble table tops – inside one of the prettiest heritage hotels in Georgetown – Chef Christopher Ong prepares original Peranakan dishes, from otak otak to hong bak, with classic French techniques, resulting in one very unique dining experience.

Meanwhile, the Dining Room at the Macalister Mansion delivers haute French cuisine in an all-white room with all-white décor. The restaurant is part a stunning boutique hotel set inside a colonial mansion that’s been refurbished to perfection. After dinner at the Dining Room, the hotel’s bluntly named Cellar and Den are worth a visit – the former for wine, the latter for single malt whiskies and cigars.

Chin’s, on the other hand, isn’t part of a boutique hotel, and the selling point has little to do with historical relevance. Often ranked among the best Chinese restaurants in Malaysia, Chin’s hangs out at the water’s edge, laying claim to a spot next on Church Street Pier, next to the clan jetties. The interiors are modish and funky, with brightly coloured paintings hung from the ceiling and funky, custom-made ceramic plates.

The restaurant itself represents the evolution of eating on Penang, an island whose street food remains unrivalled – head to New Lane’s hawker centre at night for proof – but whose fine dining scene is still emerging.

Penang has lured foreign visitors to its shores for centuries, sometimes under less-than-luxurious circumstances, but in this new era of discovery, its riches still feel unknown and untapped. From vibrant murals on weathered walls to burgeoning boutiques, as the island has developed, its connection with the past has only grown more luxurious, more tightly entwined in the native culture, more cherished by its locals. This pearl keeps getting better with age.