Venture into the Ryokans, Onsens and Forests of Japan 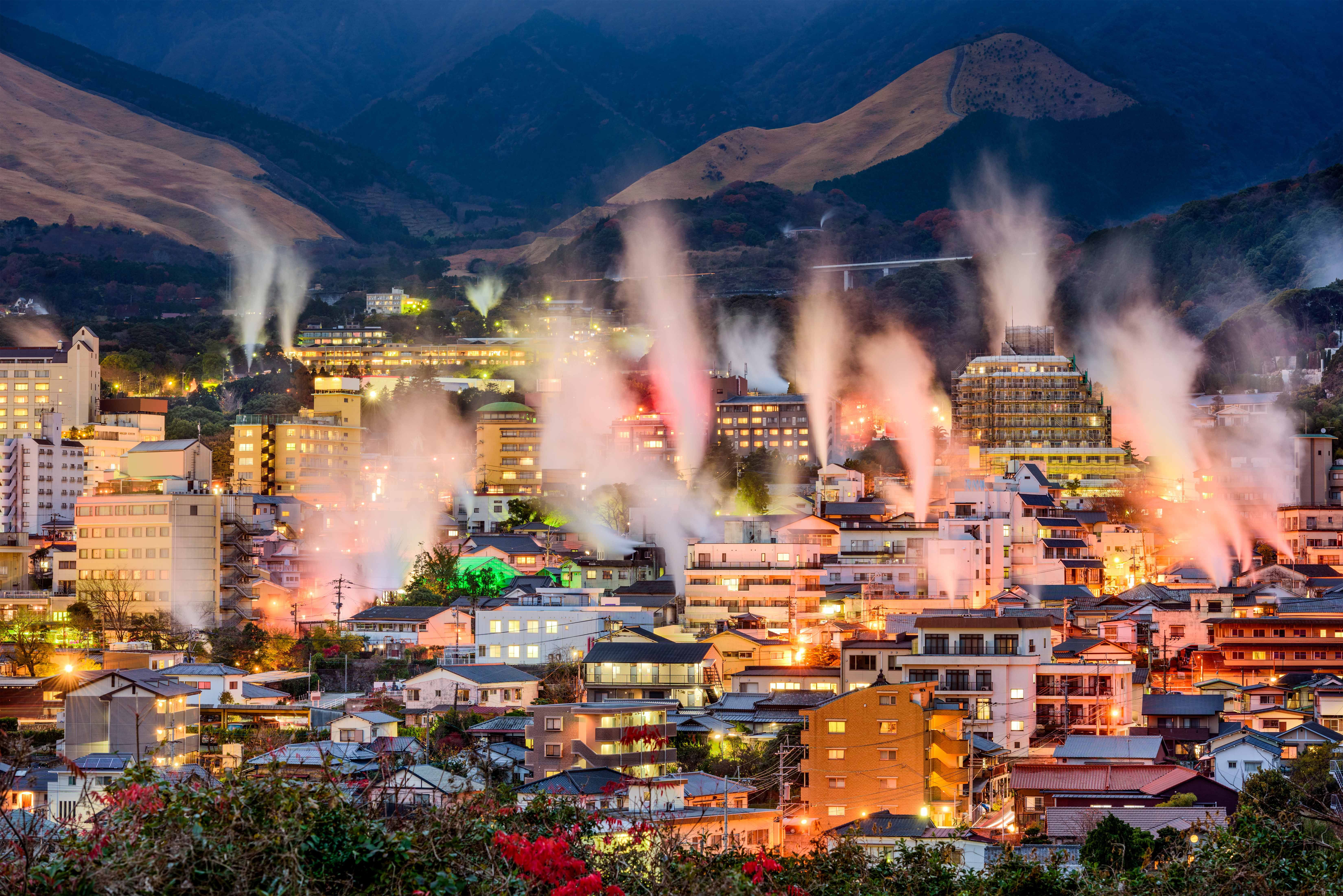 Travel
Venture into the Ryokans, Onsens and Forests of Japan
Share
Next article

As we wend our way from the station in Nakatsu, 120km east of Fukuoka on the southern Japanese island of Kyushu, it quickly becomes clear that my week with Walk Japan has one critical element: being naked among strangers.

As a Brit, this prospect is absolutely terrifying. We just don’t do public nudity, but my fellow participants seem to take it in their stride, particularly a German couple for whom this is clearly the most normal thing imaginable.

To be clear, the clothes-free element of the week arises because our walks through the breathtaking Kyushu countryside end each evening at an onsen, a Japanese hot-springs bath. Walk Japan’s guided tours across the country, varying in levels of difficulty, all feature particular cultural elements; my week in early autumn on the Oita Hot Spring Trail includes the onsen in addition to hyper-local cuisine – the main reason I’d signed up.

In the endless metropolitan spread of Tokyo it’s easy to forget that Japan is more than 70 percent mountains, making it perfect for walking and hiking. Our trip is to take us from Nakatsu to Beppu, the onsen epicentre of Japan, second only to Yosemite National Park globally in the concentration of hot springs, with a mind-boggling 2,800 spread across town.

But before we reach Beppu, our group’s meeting point at Fukuoka station affords the chance to spend a day in this city, which is particularly renowned for its yatai, or outdoor food stalls. More than 120 of them line the streets and canals, offering delicious, home-cooked food to between eight and 12 diners, huddled on benches surrounding the food-preparation area.

We choose from scores of specialities, including smoky yakitori skewers grilled over charcoal, hakata ramen, a local dish of thin noodles in a pork-based broth, or my favourite: motsunabe, a bowl of soft tripe with leeks, cabbage and garlic in soup. More than anything, the key to the success of the dish is time, allowing the heady mixture gently to bubble away for hours on end, improving in flavour and texture as it does so. It’s a timely reminder that slow food – in every sense of the words – pervades Japan like few other destinations.

The next day brings not only a briefing on the bare essentials of the onsen but also the first chance to meet my fellow walkers. There are two couples, recent retirees from just north of Sydney, and the aforementioned Germans, along with two guides who accompany us throughout, both perfectly fluent in English, terrifyingly smart polymaths and utterly charming company.

The group dynamic is important, because you spend pretty much every waking hour together, from breakfast through to dinner. It also means you learn a lot: about one another, but most of all about Japan, its countryside and culture.

Onsen are integral to Japanese life and play a critical social role. Firstly they’re egalitarian, so anyone can talk to anyone – being naked is, after all, a great leveller. For the elderly they’re a chance to bathe at leisure but also, crucially, to socialise. Onsen even carry great historical importance as, centuries ago, samurai warriors would take advantage of them to heal their battle wounds.

Onsen etiquette is vital. I thought myself well versed after multiple visits to Japan over the years, but to my horror learn during our briefing that in any ryokan or onsen, your yukata gown has to be closed in a specific way: the left side folds over the right, otherwise you replicate the wrapping of a body in preparation for a funeral. Yikes.

Lessons duly learned, we arrive at Yabakei, a spot famed for its forests, streams, and valleys, one of which hides the sublime Kogane Sanso onsen. After my initial trepidation, I find the hot spring experience to be a delight, and it also provides a chance to get to know my (male) fellow walkers – the ladies are in the onsen next door.

Dinner is even more memorable. After a communal pronouncement of “itadaki masu” – a combination of “bon appétit” and saying grace before a meal – a succession of dishes is presented before us, kaiseki style. We learn that not only is every ingredient Japanese, but also that the vast majority are local to Kyushu.

Our arrival coincides with the start of autumn, so there are green ginkgo nuts, a seasonal delicacy surrounded by a decoration of maple leaves. There’s watermelon with sesame seeds, lime and spiced cod roe, eel with egg, edamame on tofu, smoked duck and pickled plums – and these are just the appetizers.

From Yabakei our first stop is the “blue tunnel”, built by hand in the mid-18th century by a monk who spent 30 years with hammer and chisel chipping away at a mountainside. He had accidentally killed his master and built the tunnel to aid the community and repay his debt. Then to our first temple at Rakan-ji, founded in the 14th century and known for the multitude of Buddha statues looking out from natural caves over forested hills.

Lunch comes at a vegetarian restaurant run entirely by women, where bento boxes contain produce from neighbouring farms that reminds you what vegetables should taste like, while the warm tofu is ethereal. This being Japan, there’s no boasting about “farm-to-table” menus, just modesty.

After walks through breathtaking green and red maple forests, past boar traps and piles of chestnuts, we find ourselves navigating a stone-paved section of an ancient trail leading to the town of Hita.

Another onsen – a hugely welcome soak for aching limbs after a long day’s walking – is followed by a dinner that begins with an aperitif of local plum wine, followed by more stellar dishes including octopus and cucumber salad with daikon, a weird but brilliant cheesecake with black pepper and salmon, and an agedashi tofu to beat them all.

The next day’s walk starts by traversing Kokonoe Yume, a suspension footbridge sitting a heart-stopping 175 metres above a valley floor. It attracts thousands of visitors every week for its views of two waterfalls and pine-covered hills, but just a few minutes’ walk away the crowds disappear altogether as we wind our way through dark, ancient forests. At one point we pass shiitake cultivation, the mushrooms growing on logs, arranged with characteristic neatness and order, giving off heady fragrances more akin to truffle.

As luck would have it, emerging the other side of the forest into bright sunlight we stop at the aptly named Milk Land Farm. In the heart of dairy country, surrounded by wildflowers, the farmstead makes its own ice cream on site, using milk from the cows you can hear mooing outside. Food simply doesn’t get more local, sustainable or delicious. While ice cream is always welcome, after three hours walking it’s nothing short of divine intervention. The incredible flavours and textures could win awards in Italy, but the makers’ humility means it’s just a local farm shop doing its thing.

Another reminder of how slow food is not a fad but a way of life in Japan comes during dinner at Nagayu. By now we’ve come to expect that tiny onsen guesthouses, in the absolute middle of nowhere, will produce scores of exemplary dishes every evening. A soup of minced duck meat, cheese with basil – both local, naturally – and deep-fried river shrimp plucked from just yards away are some of the highlights.

Under grey skies the following day, Fuko-ji temple brings a completely unexpected giant Fudo-Myo deity, carved centuries before on a cliff face. Anywhere else, this would be a massive tourist draw, but we have the place to ourselves. Then comes the 16th-century hilltop Oka-jo castle, demanding one of the few inclines on our walk, graded level two out of five on the Walk Japan scale of difficulty, meaning you must be comfortable walking around four to five miles a day. It’s hardly scaling Everest.

Towards the end of the tour we inch closer to Beppu through a designated Geo Park and the wonderfully named Bungo Ono district, with steam spouting from mountains at every turn. Crossing the area’s famed horseshoe-shaped waterfalls, we join another ancient pathway, the Himuku Kaido, which leads us happily past a sake brewery where we’re given a fascinating in-depth tour before being encouraged to sample a selection of products. When in Japan, and all that. Our stop also coincides with a wedding where, to our delight, the happy couple insist on taking photos with slightly bedraggled, soggy walkers.

By now the routine of walking and talking, eating and bathing has become a familiar delight, the group now a unit of firm friends. Our knowledgeable guides, Tetsuo and Takuya, are able to discourse authoritatively on everything from Tibetan Buddhism to the history of samurai or indeed, to my considerable delight and surprise, early ’90s British indie music.

We finish in the town of Beppu, where vents of steam seem to rise from every crevice. Our final dinner brings a fitting end as the super-hot steam vents are used by locals to cook food in the most sustainable and healthiest way imaginable. Our onsen even lists suggested timings for hard boiled eggs or cooking different vegetables.

Sun-dried mochi rice with chestnuts, dried bamboo shoots and burdock, shrimp harimaki spring rolls and pumpkin soup are all on the menu as we toast one another, our guides, but most of all Japan, its people and the incredible produce that combine to create a week of spellbinding but humbling experiences with slow food and hot springs at its core.