If You Are Going to Splurge on Caviar, You Should Learn the Best Way to Eat It 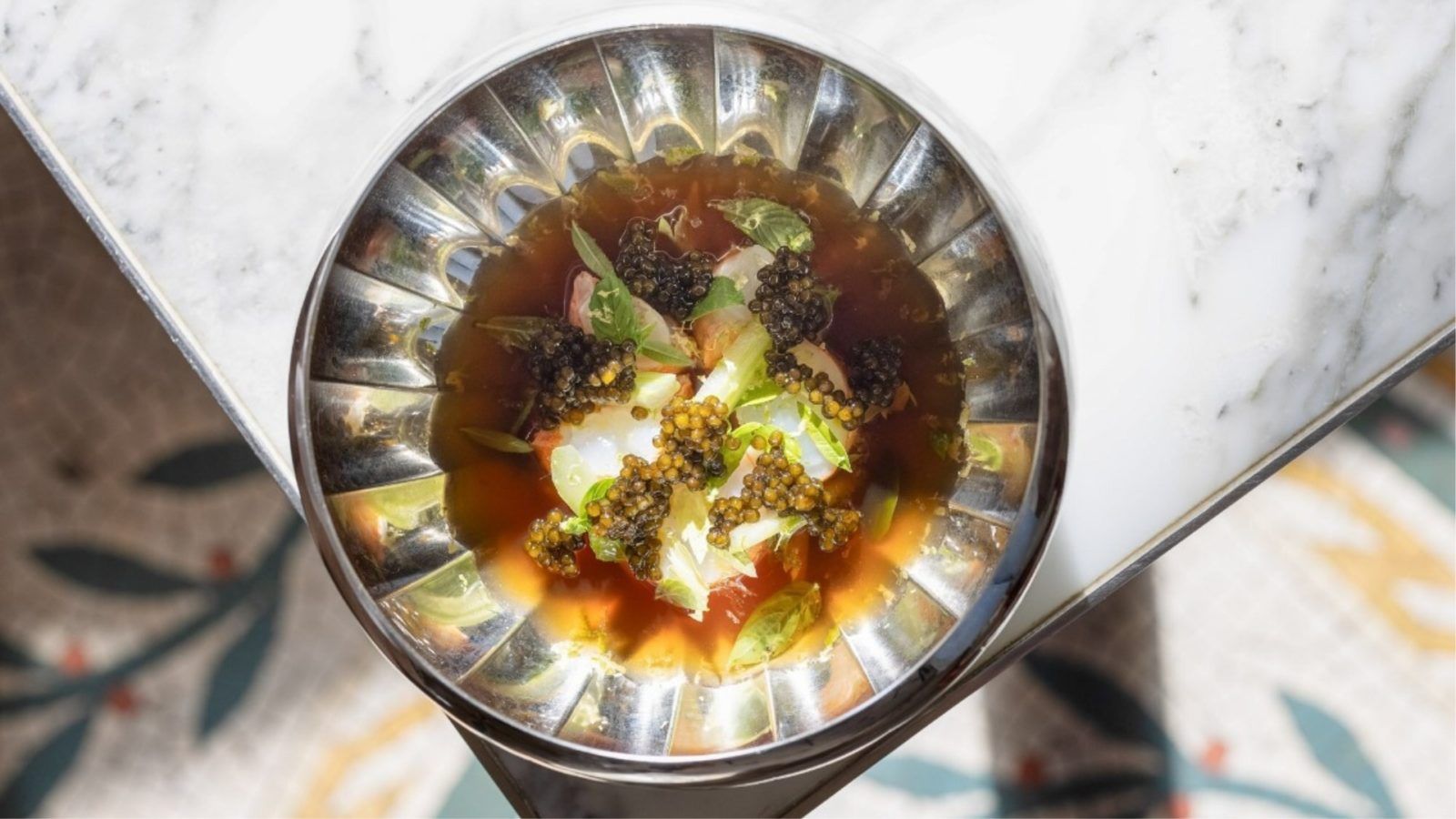 Wine & Dine
If You Are Going to Splurge on Caviar, You Should Learn the Best Way to Eat It
Share
Next article

The cost of the caviar supplement on a restaurant’s already-spendy tasting menu often produces sticker shock, paired with a disinclination to opt for the add-on. Just a little scoopful of the salty, buttery roe can command a rather immoderate price, leaving the luxurious item to reside in a world of its own.

Of course, not all caviar — which traditionally comes from sturgeon — is created equal, and while it’s possible to procure some of the rich roe at a slightly more wallet-friendly price, Karin Nebot, managing director of Paris institution, Kaviari, wouldn’t recommend it. Her father Jacques Nebot, along with his business partner Raphael Bouchez, started the company in 1980 and Nebot is, of course, biased. She knows her caviar, having grown up eating it regularly before entering the scene professionally about 12 years ago when farmed caviar began replacing the wild variety as the standard. “I had the feeling that we had to tell our story and build a brand,” she says, and she has been instrumental in Kaviari’s role as one of the first houses to embrace the eco-friendly approach.

The “Right” Way to Eat Caviar

Nebot’s expertise is best realised through monthly chef’s dinners and caviar workshops at La Manufacture, a cosy, family-run shop complete with a rustic dining room in Paris’s 13th arrondissement, where Nebot spends most of her time. These private dinners flow with caviar and Champagne, and the workshops, informative and delicious, provide a beyond surface-level understanding of one of the world’s most expensive foods. Nebot gives a tour of the space, before guiding guests through a tasting of several different varieties of her family’s lifeblood. Sipping vodka in between bites, while not required, is part of the fun. It also importantly “cleans the mouth before the tasting,” explains Nebot.

This may be the best way to absorb a history lesson too, unless reading French is a part of your skillset, as the space’s long hallway functions like a mini-history of caviar. Tasteful boards full of text and sparse pictures adorn the walls and serve as a brief education on the production of the roe (it takes a minimum of seven years for the female’s eggs to mature), the importance of water the sturgeons swim in (“The better the water, the higher the quality of eggs,” Nebot says), and the maturation process, which Kaviari’s caviar master does in-house. The formula is seemingly simple: “To make a good caviar, it needs time and love,” Nebot says. These criteria are realised through the master’s careful selection of the eggs, which are first manually extracted from the fish, then weighed and washed before being drained. The final step, salting, is also the most important, since the mineral’s role is integral to the final product’s taste.

The process of producing caviar has changed, but Kaviari’s passion for the craft has not. At the time Jacques Nebot and Bouchez started their business with the indispensable guidance of  “masters of Iranian caviar,” Nebot says, all caviar was wild-caught. But a 2008 ban on fishing in the Caspian Sea, home of the Ascipenser sturgeon, led caviar producers like Nebot to begin raising wild sturgeon on fish farms. In addition to protecting the formerly-wild Siberian sturgeon (Acipenser Baeri), Kaviari also produces caviar from species that have only ever been farmed, such as the Acipenser Dauricus Schrenki, which yields the chef-favoured Kristal caviar.

Although the endeavour seeks to save the once-wild sturgeon from extinction by overfishing, some chefs like Le Clarence’s Christophe Pelé nonetheless mourn the loss of the wild variety. “It’s a pity that we no longer have access to wild caviar which had unique taste and quality but at least we have caviar all year round with regular quality,” he says.

Pelé incorporated Kaviari’s products prior to Le Clarence, but then switched allegiances for several years when he began using Petrossian, a brand with a long, respectable history dating back to 1920. In 2015, Pelé returned to Kaviari’s Kristal (from China, the eggs are a shimmering gold-green with a deep nutty flavour), which the chef says has a “nice colour,” and isn’t as salty as he’d come to find Petrossian’s.

“The Simpler, the Better”

While fine-dining chefs often enlist caviar as an enhancement to a fully-formed dish, Nebot’s workshops encourage participants to first taste the roe on its own to develop an understanding and appreciation. “The simpler, the better!” she says. It’s the best way to get a feel of the texture, particularly when tasting a few different types. The purest expression of the roe comes through when you let the eggs linger on your tongue until they burst, releasing even more earth, salt, butter, and briny herbs.

Pelé’s recent dishes of fried small red mullet fish, venison, and foie gras included caviar. For him, it’s “a condiment that brings to the dish an iodised taste and a beautiful salinity.”

Amaury Bouhours, the executive chef of Le Meurice Alain Ducasse in Paris, likes using caviar as a seasoning, for the “salty yet delicate quality,” it lends to a dish. Caviar, says Bouhours, gives the dishes in which it’s featured a chance “to develop greater dimension.”

After tasting the roe on its own, Nebot recommends dolloping a spoonful on a rustic piece of bread slathered with butter. Butter, unsurprisingly, is a fantastic accompaniment to a spoonful of caviar, whether its Baeri from France (woody, minerally, and yes, buttery), Oscietre from Bulgaria (earthy, savoury, and quite salty), or Kristal, which Nebot says is the one the majority of chefs working with Kaviari select. It’s also, notably, the most expensive of the three, though a relative steal compared to the world’s most expensive caviar, Beluga.

By sheer virtue of how sea-to-table caviar exists, it’s likely to remain one of (if not the) most expensive food items on the menu, securing its place as a celebratory splurge, paired with its ideal liquid counterpart, Champagne.

“Fame is like caviar. It’s good to have caviar, but not every damned day.”