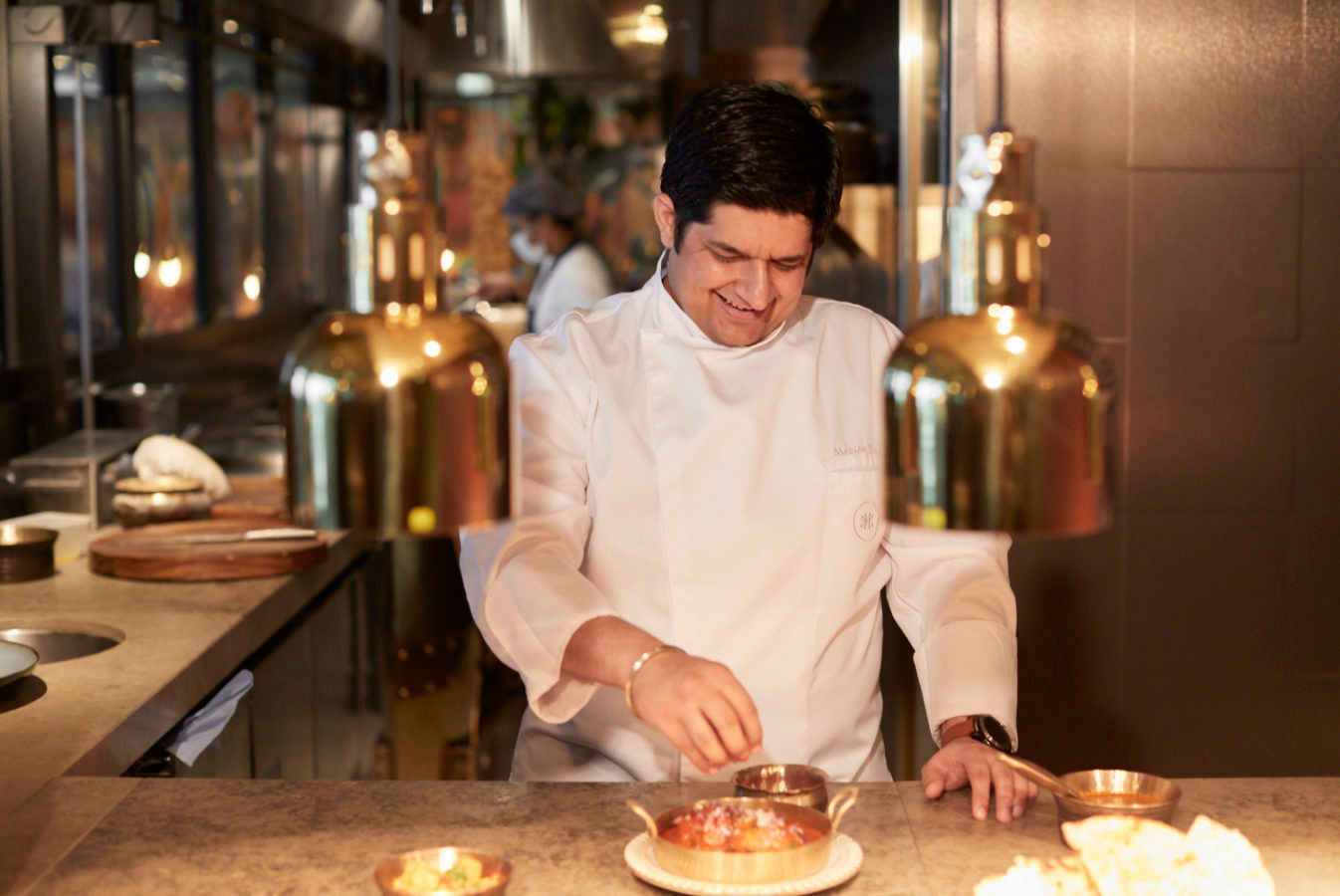 Since opening its doors two years ago at Rosewood Hong Kong, Chaat has become a crowd favourite and one of the trendiest restaurants in the city. Last month, Chef Manav Tuli’s craftsmanship and dedication to celebrate and elevate Indian cuisine, finally garnered him a much-awaited Michelin star.

Tuli began his career in the Southern Indian state of Kerala, an exciting culinary destination in itself. After working at prestigious restaurants like the world-famous Tamarind in London, at Chaat, he focuses on the mesmerising universe of Indian street food – and anything in between. The ever-evolving menu is a sensible blend of reinvented cult dishes, modern classics and traditional recipes. At Chaat, innovation and nostalgia coexist to celebrate the diversity of Indian cuisine with style and impeccable techniques.

I recently spoke to Tuli about his achievement, his emotional attachment to street food and what’s next for Indian cuisine.

In conversation with Chef Manav Tuli

Congratulations on your well-deserved first Michelin Star! Did you expect it? How does it feel to be recognised by Michelin?

Thank you so much. The whole team had worked very hard during such difficult times and with full dedication, everyone had been expecting to hear this good news.

I cannot describe in words how it felt when I was told that we had been awarded a Michelin Star. I actually discovered that I am an emotional person. That feeling is unmatched. It’s like winning a gold medal in Olympics for an athlete or winning a Grand Slam for a Tennis player.

Has it always been a dream of yours to be awarded a star?

To be recognised by the Michelin is probably the best and the most important thing for any Chef in the world. The moment a person decides to have a career as a Chef, I can tell you for sure – all they dream of as their ultimate goal is to achieve a Michelin star.

When I started my journey as a young student at the Institute of Hotel Management in Kerala, one of our lecturers Mr Ranjith Pillai one day gave us a set of black and white printed sheets ,which had small briefs about the then top chefs in the world, like Marco Pierre White, Charlie Trotter, Joel Robuchon etc. After handing us those sheets he said: “These are the gods of kitchen, these are the ones you should follow if you ever want to be successful as a chef.” After reading those papers, I first discovered what a Michelin star was and, since then, it has been my dream. I always used to think that Michelin Star chefs were like greek gods …. You could only see them but could never touch them.

So, to answer the question precisely, Yes it has been a dream of mine since 1999, when I started my Hotel Management course and discovered what it meant to be a Michelin Star chef.

What does this achievement mean for Indian cuisine in Hong Kong and all over the world?

In my opinion, Indian cuisine is the most diverse, complex and vibrant cuisine in the world. This is why I got so fascinated by it in the first place. However, there’s so much to discover, know and learn, that I believe one lifetime is not enough for me to learn everything.

It’s not just a cuisine about Naan and Curry. There’s so much more to it. A Michelin Star gives us the platform to bring and share those stories, the history and evolution of food in India through the dishes that we present to our guests in Hong Kong. At the same time, create a buzz all around the world changing the perception of Indian cuisine as much more than just curry and rice.

Over the past few years, the Michelin Guide has become more and more diverse, highlighting cuisines and chefs from everywhere. What does this mean for you and the future generations?

I have a daughter who’s three years old. Whenever I am cooking at home she would always come and stand next to me on a stool and tell me: “papa, I also want to be a Chef.”

I think Michelin as a term, is a synonym for quality. More diversity in the Michelin guide will definitely encourage more and more chefs to aim for the skies, thus improving the overall big picture of food around the globe and bringing forward many interesting foods that were not known by he regular public. This is a great opportunity for the future generations too.

In this respect, tell us about your time at London’s Tamarind, one of the first Indian restaurants to ever receive a Michelin star.

My time at Tamarind was great. I really got to work closely with one of the greatest Indian Chefs in London, Karunesh Khanna. His style and flair are one of the best I have ever seen, I really got to learn a lot from him. Before the reopening of Tamarind, we were given the difficult and unusual task of presenting a version of Indian cuisine that was original and authentic but yet not so heavy. We had to do a lot of trials and rethink our approach to make traditional dishes lighter. It was a great exercise and definitely made us look at different recipes in a new way, a great learning process.

Indian cuisine is very diverse and multifaceted. What aspects and regions do you highlight the most at Chaat?

At Chaat, we don’t focus on a single region, but the whole of India. We do look at and utilise the skill set that is available within our kitchen to create dishes inspired by personal experiences. The guys in my kitchen are either from or have experienced working professionally in at least nine different regions of India, like Himachal Pradesh, Punjab, West Bengal, Chattisgarh, Madhya Pradesh, Kerala, Rajasthan, Delhi, and Maharshtra.

I think this approach definitely gives us the ability to have a diversity and variety on the menu that is unlike any other; at the same time, it also gives the team a sense of pride and ownership.

Chaat is first and foremost an elegant and meticulous celebration of the India’s glorious street food. Did street food play an important role in your life and career?

Since my childhood, if we ever went out as a family, it was always street foods. Of course because it was more affordable for, but also because everyone had something they loved, there was so much variety.

My mum and sister would get in the line for Pani Puris and Aloo Tikki chaat, Dad would go for Raj Kachori and Seekh Kebabs. I would go for Chole Bhature, Kebabs or Biryani. Everyone would finish with a Matka Kulfi Falooda. It was more than just a meal, it used to be a celebration in itself.

Now that I’m not able to travel back to India so often, I really miss those days and treasure those memories even more.

What’s next for the evolution of Indian cuisine? What are some trends that you are noticing?

We have great Indian chefs like Gaggan Anand fusing molecular gastronomy with Indian cuisine. At the same time, lots of chefs are going back and researching our past to discover the lost recipes to present them to the world. I am working on that too…I will soon be presenting a few of these dishes on our menu.

Another parallel trend is chefs experimenting by refining and presenting traditional dishes with new ingredients and incorporating cooking methods like sous vide.

What are some of the dishes that you’ll never remove from Chaat’s menu? Why?

Baked Samosa, one of the most iconic dishes of Chaat. My guests love it.

Tandoori Lobster as I think we are the only Indian restaurant, in my knowledge, to do a Tandoori lobster, it’s our speciality.

Beef Cheek Kebab, because it’s bold to serve a beef kebab in an Indian restaurant , and it’s one of our top sellers.

Dum Biryani as we were the first ones to introduce a dum biryani in a miniature form with a Paratha cover in Hong Kong. Since then, it has been a show stopper.

Pork Cheek Vindaloo. A lot of Indian restaurants do a Vindaloo, but from the feedback of our guests, it’s the most balanced and refined Vindaloo they have ever tasted. Also, the way the chilli slowly works your way on the palate, rather than hitting you instantly, is what makes the dish so special.

If you could pick three Indian dishes to eat for the rest of your life. What would they be and why?

Raj Kachori, one of the most complex dishes ever. It’s sweet and sour, spicy, soft yet crispy, crunchy yet moist and a blast of flavours in your mouth; Butter Chicken as I always go back to it no matter how many times I have had it and Chocolate Naan, a dish that was born through the necessity of satisfying a sweet tooth and wanting a quick chocolate fix. It’s so comforting and addictive, I am sure I can have it for the rest of my life.