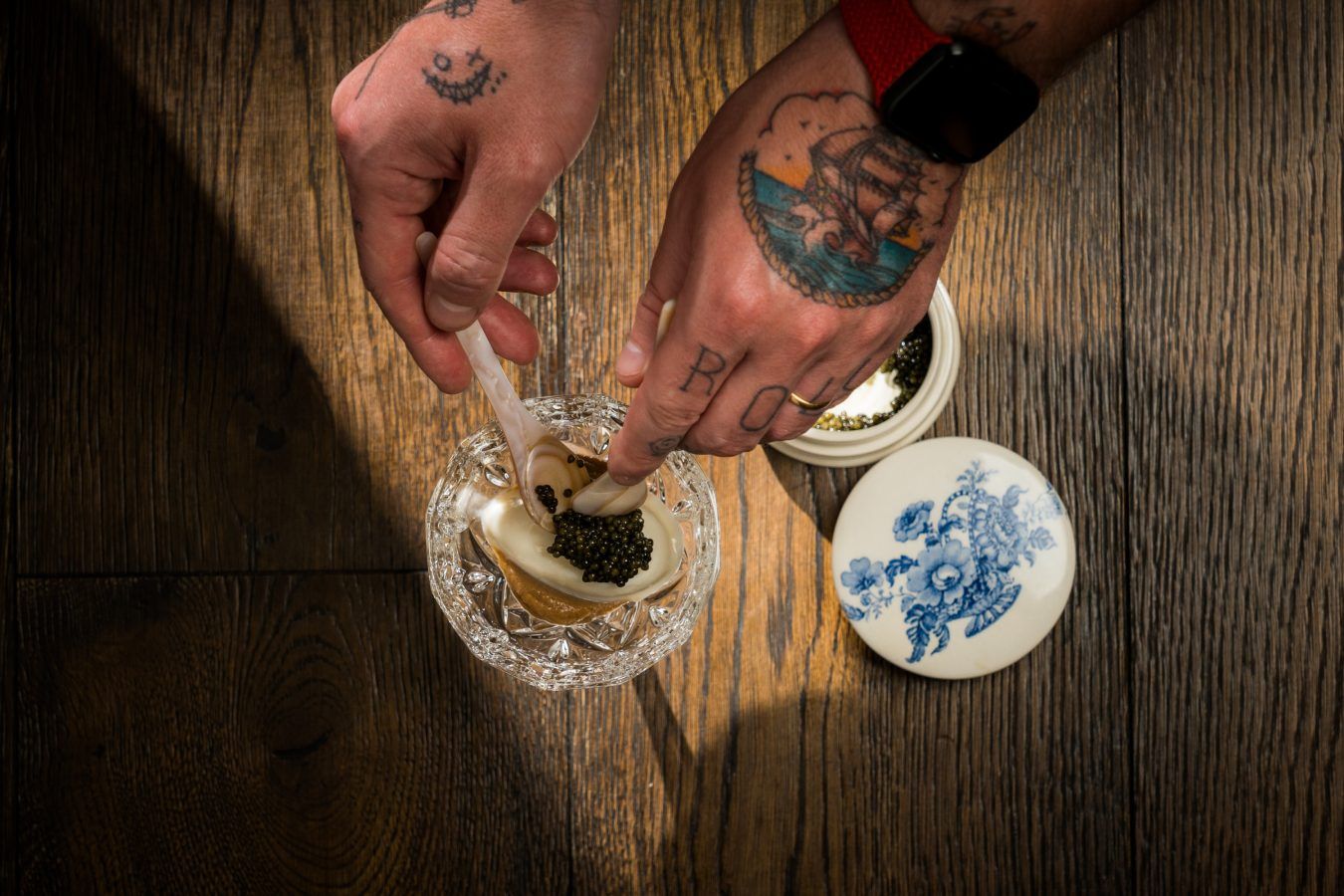 Paulo Airaudo’s second Hong Kong venture, Noi, is an esculent devotion to everything the chef knows – and loves.

“I’m a cook, not a chef,” says Paulo Airaudo, insistent on the specificity of the word “chef ” being closer in meaning to “boss” – and he’d really prefer to just stick to the cooking. But of course. For Italian-Argentinian Airaudo, who’s been working in kitchens professionally since the age of 15, cooking has been a passion- turned-profession that’s led him to faraway places – including Geneva, Barcelona, San Sebastian, London, Colombia and, for the second time with new-to-town Noi, Hong Kong – where the common language Airaudo would share with his colleagues and patrons are eyes-closed hums that can only be elicited from delicious bites that wordlessly satisfy.

Our Restaurant Picks For Dining Out This September
Wine & Dine
A Stiff One For September: Where to Drink in Hong Kong this Month
Wine & Dine

And it’s been a starry, starry trail of success that has followed the chef since. His first restaurant, La Bottega in Geneva, earned a Michelin star within five months of opening. His second, Amelia, located in the heart of San Sebastián – with an outpost in Hong Kong’s Harbour City – won two Michelin stars in late 2021, inscribing Airaudo into history as the first-ever foreign chef awarded two stars in the Basque region.

The chef is nothing if not industrious in this constant strive for innovation. So don’t expect recycled dishes lesser contemporaries might call “signature” – the chef defiantly refuses to be defined by what he’s once created. He’s already on to his next.

“I don’t believe I have a signature creation as my cuisine is always evolving,” says Airaudo, laughing. “There’s always something different, something new, but the heart of all that I do is Italian cuisine. You can always expect freshness and innovation from me.”

Noi, slated to open in Four Seasons Hotel Hong Kong this September, is what the chef has described as the next step of his culinary journey. “Noi represents the evolution of contemporary Italian cuisine,” says Airaudo. “The name ‘Noi’ is Italian for ‘we’ or ‘us’ and I chose it because I want to share the best of what I’ve learned and experienced with my guests.” And what he’s learned, primarily, is an undying love for seasonal produce specific to the geography he’s based and developing dishes that turn each ingredient into a tribute honouring the farmers and natural habitats they’ve been harvested from.

Like all of the chef ’s prior restaurants, which feel like a gastronomic connect-the- dots puzzle in homage to Airaudo’s complex identity and personhood – Amelia is named for his daughter, Amélie, for example – Noi continues to add to the Airaudo oeuvre. Beyond the seasonal, Italian fare indicative of what Airaudo describes as everything from food he grew up eating – his grandmother’s, he lovingly remembers – to what he now loves to cook and serve, every last discerning detail beyond the esculent was a choice made by the chef himself. From a handpicked list of dedicated wines, to décor scavenged by Airaudo from his travels, to a curated playlist of ’80s, ’90s favourites, to pop-art references to his favourite films, video games and the very tattoos that adorn his body, Noi is a big-picture crystallisation of who Airaudo is – and who he wants you to know him by. (Spoiler alert: It’s a lot more than just “cook”.)

“Hong Kong is an amazing city,” Airaudo says. “I’ve visited many times and there’s always something that surprises me, similar to how a dining experience at one of my restaurants is like. Noi is a piece of me that can stay here and be shared with everyone.”