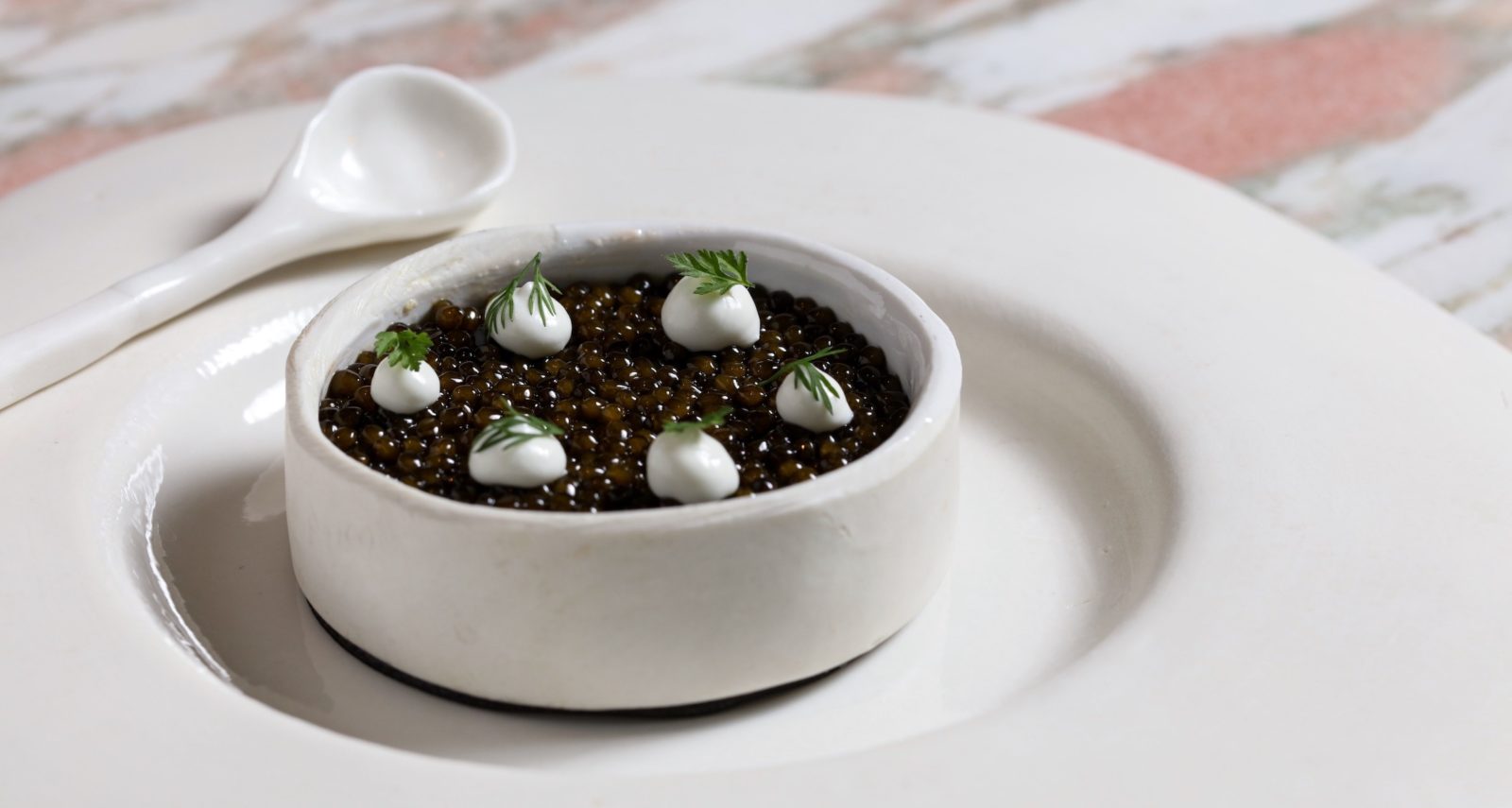 At his newly opened restaurant Estro, Antimo Maria Merone pushes the boundaries of Neapolitan dining. We talk to the chef about his country’s cuisine and its bold evolution beyond the peninsula.

Entering Estro, chef Antimo Maria Merone’s new restaurant in Central’s Duddell’s Street, you’re transported into another dimension. Clearly influenced by art, a millennial aesthetic, auteur movies and, in a very subtle way, the chef’s hometown of Naples, the spacious dining room looks like no other restaurant in Hong Kong.

However, don’t expect to find Amalfi lemons on the tables or pseudo-vintage chairs from traditional trattorias of the 1960s. Instead, Merone worked with celebrated designer André Fu to create a space that takes inspiration from the elegant salotti (living rooms) of the 19th century. Fu reimagined this concept by adding contemporary furniture, eccentric wallpapers and a dash of cosmopolitan elegance, which you’ll also find in Merone’s haute Italian menu.

Merone is part of an avant-garde of Italian chefs who are trying to redefine the meaning and evolution of their cuisine around the world. Although he strongly believes that what he’s doing at Estro isn’t unique, he’s determined to show the diversity, adaptability and fine-dining potential of Italian food. Beyond comfort and simplicity, which made the cuisine from the peninsula one of the most popular and well-known in the world, there’s indeed a lot more to explore.

Merone talks here about Italian cuisine, the meaning of authenticity and the concept behind Estro.

Tell us about your career.

I started cooking professionally when I was 25, which is pretty late. I had a 10-year gap from some of my colleagues because I studied finance first and decided to follow my passion later. Professionally, I started cooking in Berlin. Then, prompted by my family, I went to Alma [cookery school] to study Italian cuisine. After that, I worked for Philippe Léveillé at Miramonti l’altro, and that’s why I moved to Asia because he opened a restaurant in Hong Kong and I came here as his head chef. In 2014, I started working with chef Umberto Bombana and moved to Macau in 2015 to helm Otto e Mezzo Bombana there, where I worked for six years. Estro is my first personal project. My wife, who’s a local fashion designer, was heavily involved in the aesthetics of the restaurant and came up with a lot of details that make the restaurant what it is.

What’s the idea behind Estro and how long did it take you to finalise the concept?

Estro is a dream that has been in my drawer for a long time and that luckily became reality. I’d been thinking of opening my own space for a while but I didn’t even know where to do it. I was in Macau and I couldn’t even visualise my restaurant. Last year I got stuck here in Hong Kong because of Covid and I started thinking that maybe it was the right time to focus on what I wanted to do and to start working on a concept or a business plan. I put down some ideas and I started to visualise what I had in my mind in terms of the aesthetics of the space, the food I wanted to serve and the story behind the restaurant. I also started to talk to potential investors and I created a small deck.

What I wanted from the beginning was a strong sense of heritage. I’m from Naples and even though I’ve spent more than half of my life abroad, it’s still the place that has a special place in my heart and it always will. The idea was to create a restaurant with Naples in its heart and the rest of the world in its mind. I’m proud of my origins and they represent a big source of inspiration, but at the same time, they’re not limiting my creativity of the possibilities of what I can do and explore.

Estro, which means inspiration in Italian, is diverse. Yes, we’re trying to refine some historical dishes but we’re also trying to use ingredients that don’t exist in the South of Italy and, taking it out of context, we approach it in a Neapolitan or completely different way. I want the food to be essential, evocative and it has to represent me. I’m not saying Estro is special or unique, but it’s distinctively mine.

Talk us through the restaurant’s design and aesthetic.

I had several meetings with André Fu, who designed the space and did an amazing job. I basically gave him some references about Napoli, the old town and the aristocratic salottos typical of the 19th century, located in huge apartments with high ceilings. We have some retro-chic elements, wallpaper and other references to that. All these inspirations have been reimagined through the eyes of André, a local designer who translated this for Hong Kong. He said before that the space is inspired by my character, which he considers to be eclectic.

Do you think Estro could work in Italy?

Yes, actually. The approach is contemporary and it could also work in Naples. Of course, the connection between the market, the dishes and the idea behind them is always direct. So, maybe, it could be even easier for me to serve this food there, because some dishes are really a click into your memory. If you’re a kid from the South, you’ll instantly recognise the inspiration behind these reinterpreted dishes in a second. Here, it’s different. I’m telling a story that most people are experiencing for the first time. If I were in Italy, I’d probably use more Asian ingredients and influences, because it’s part of my story and who I am.

Do you think the perception of Italian cuisine as fine dining is changing?

Absolutely. And I’m super happy to be part of this era in which Italian food is kind of evolving. Not the food itself, but the conception of what Italian cuisine is and what can be done with it. Outside of Italy, it’s been extremely difficult for my colleagues who came before me to change the perception most people have of our cuisine. There are very few examples of people who’ve been successful in trying to push the boundaries of Italian cuisine outside of the country.

One is definitely Luca Fantin in Tokyo, who’s been doing it for 10 years. He’s pushing and pushing to change this conception and show how diverse, complicated and interesting Italian food can be. It’s really hard and reductive to summarise our cuisine to, say, 10 comforting dishes that everyone loves. There are so many regional differences and dishes and ramifications inside each region.

What’s even more fascinating is that, while we have an ancient history, Italy is a new country. We’ve been unified for 160 years. Each area has a very different history and therefore culinary tradition and heritage. Nobody has ever written an encyclopaedia of Italian food where everything is categorised and classified. Italian cuisine isn’t codified like French cuisine is, for example. There’s a fascinating micro-diversity that gives countless possibilities. Even the concept of authenticity is very diverse depending on where you’re from and your experience.

How do you find the balance between tradition, innovation and telling a story in each dish?

The line is very thin. What I try to do is to keep the initial flavour of it alive and intensify it, to go into its roots to clean it up. With the first bite you need to experience the original flavour. I think the most important thing is to really push the intensity of the flavour to its full potential.

Can you talk us through one dish that represents your philosophy and Estro?

Our Genovese, which at first I thought was too rustic to put into the menu. It’s a super-traditional recipe from Naples, our ragù. What we do at home is to cook the pasta with the sauce and then use the meat afterwards as another dish. Here at Estro, I don’t cook the meat with the onions. The roasted onions become a jus and then, separately, I cook a short rib. This reminds me of the traditional sequence of eating it in my family, served in a small single bite.

This is the first restaurant you’ve opened as chef-founder. Were you scared before launching Estro?

Yes. A restaurant like this is a big investment. I’m turning 40 and I kept thinking, “This needs to work out.” Then there were all the expectations when we opened the restaurant. I was scared that we weren’t ready, that we weren’t where we needed to be. I think, in the end, I’m very satisfied, I think we opened at a time when we were ready to deliver the concept in the right way, in terms of service and the food we serve. Of course, there are still things we’re working on.

What are some of your favourite restaurants in Hong Kong?