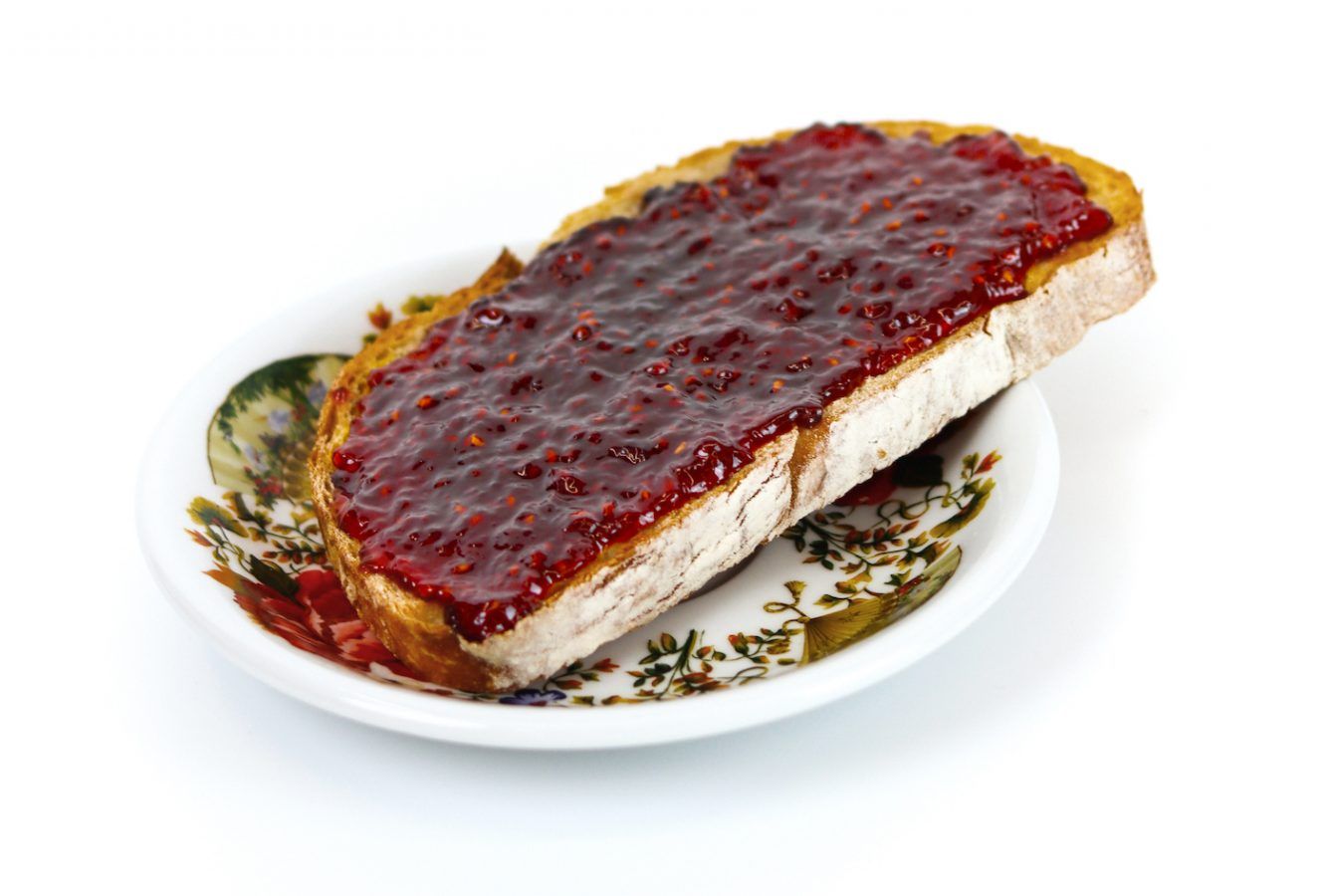 Discover the joys and woes, and the art and science, behind the making of scrumptiously sweet jams

It all begins with a brainstorming session on what to feature in our dining issue, when a colleague at the far end of the table, who’s evidently doing her best to beat a severe case of post-prandial lethargy, blurts out, “What about jam?” And without skipping a beat, everyone around the table nods enthusiastically. They’re right, of course, because who doesn’t love a dollop of this sweet and tangy, bright and luscious concoction, spread thickly on buttered bread and best consumed hungrily on a sunny afternoon picnic in a park. Which is how I now find myself reaching out to two acknowledged experts – Wilson Fok, food writer by day, jam wizard by night, and Simran Savlani, founder of A Spark of Madness and master of all jarred foods – to discover more about this gloriously sticky subject.

Fok meets me next morning in a Wan Chai coffee joint, the sunshine and dogs running in and out of the café setting the ideal mood for our chat about jam. He dives right in: “I’ve been making jam for 10 years and my journey started with a jar of peach jam given to me by my friend’s mom.” Starring the famous Ontario peach and the colour of pumpkin-pie filling, the jar had been collecting dust in a kitchen cabinet, because “who’d eat jam if there are fresh peaches?” Months passed until a fateful winter evening demanded the familiar college all-nighter, when the hitherto-neglected jar suddenly began to look appetizing. As the sealed lid popped open – the distinctive sound is a quintessential part of any jam experience, says Fok – the air was immediately filled with the smell of sweet, juicy peaches. The taste of summer on toast in the dead of winter changed his life, and the rest is history.

So what wisdom does this jam wizard impart on me?

We’ll start with what fruit to use. Any jam is only as good as the raw fruit that goes into it, so think about what you want to achieve, and the flavour and texture you’re looking for. Do you want it on the sweeter side or with a tart punch? The great thing about jam-making is that as almost any fruit can be used, the fun and possibilities are endless, but a fruit that naturally has a good balance of sweet and tart flavours with a natural high level of pectin will make the process easier for beginners. Thus, consider plums, raspberries and blueberries.

It’s crucial to use the fruit only when it reaches peak ripeness – the point at which it develops its best texture and full flavours, but hasn’t collapsed under the weight of its own sugar and liquid contents. The beginning of any fruit season is usually the best time to make preserves. Fok’s tip is to refer to the seasonal calendar and then factor in the weather in that particular year: is, for example, the summer hotter than usual and the humidity higher? Do some research on the fruit you want to use and understand the circumstances in which they reach peak ripeness, then go from there.

You can make your jam any time of the year, so long as you freeze the fruit when it’s in optimal condition. Freezing actually helps with the cooking, as water makes up 70 to 90 percent of the weight of most fruits and vegetables, which, along other substances, supports their structure and texture. When they’re frozen, the water contained in their cells also freezes, expanding and rupturing the cell walls with ice crystals, which helps break down the fruits quicker when heat is applied.

After choosing which fruit to use, it’s time to consider sugar and acid. Sugar plays a big part in determining the texture and flavour of a preserve; too much of it and you’ll overpower the fruit – and, says Fok with an eye-roll, “you might as well just eat candy”. Too little, on the other hand, will prevent the ideal jammy-ness from forming, as the fruit lacks sufficient natural sugar to gel the mixture properly. As a beginner, stick to regular granulated sugar; other sweeteners, such as maple syrup or honey can be used for their flavours, but as they contain different levels of moisture they cook less stably if used as a as a sole sweetener, and their pronounced flavour again risks overwhelming that of the fruit. The sugar-to-fruit ratio can be adjusted to taste: sour fruit means more sugar, while sweet fruit – you get the gist.

Before going into acid, let’s detour and talk about pectin. A substance found in the cell walls of all terrestrial plants, pectin is a long chain of carbohydrates called a polysaccharide. Simply put, it’s a fibre often used as a thickener in cooking and baking. When activated, it forms a molecular web in fruit syrup that transforms it into jam by binding everything together.

Now returning to acid, fresh lemon or lime often, if not always, feature in fruit preserves. Citrus peel is high in pectin, while the acidity of the juice activates and puts the pectin to work. The acidity also balances the sweetness from added sugar and gives the jam a bright and tangy kick. One tablespoon of acidic juice per 500 grams of fruit is a good base measurement; adjust the ratio according to the fruit you’re using.

Cooking jam requires tenderness, love and care, as well as time and patience. Consider macerating the fruit for a few hours or overnight. This coats the fruit with sugar, drawing out some of the juice to create a natural syrup. Breaking down the fruit this way and melding it with sugar gives the jam a head start before it goes on the heat. It also helps prevent burning or scorching compared to pouring dry sugar, which caramelises quickly, into a heated pot. It’s not the end of the world if you don’t have time to macerate, but make sure you only add sugar when the fruit has been cooked until it’s soft enough to break under the pressure of a spoon. Once sugar is added, the fruit won’t soften further.

As your fruit syrup simmers, gently stir the mixture only enough to prevent it from sticking to the sides and bottom of your pot. Avoid stirring when it reaches boiling point as it will cause the sugar to crystallise and leave a cloudy mixture. Don’t panic if this happens, as a small amount of foam can always be skimmed off with a spoon before jarring the preserve. The precise time to take your jam off the heat is told not by a timer but rather a thermometer: reduce the heat once the concoction reaches 103°C, and make sure to maintain it at 105°C – which is the perfect setting point – before you jarring it. To be safe, run the mixture through the “cold plate” test – put a cold saucer in the freezer and, when the jam is ready, scoop a dollop on to the cold plate and let it cool down completely. Draw a finger through the jam and hold the plate up. If the goop on top doesn’t slide down to connect with the bottom, you’re good to go.

Savlani, equipped with lemonade and banana bread as we sat in the sun in Admiralty, tells me she has developed recipes that incorporate various liquors, spices and herbs. While cinnamon and vanilla are considered among the best additions to fruit preserves, she encourages experimentation, believing the possibilities are endless. For example, Savlani discovered ginger and bird’s-eye chili work wonders with pink guava – and who would’ve thought that togarashi and thyme could take pineapple to a whole new level if she hadn’t let her madness run wild in her jam lab? Strawberry on its own is a nostalgic taste all of us hold dear, but elevates with tomato and basil – as Fok likes to – you get a completely new flavour profile packed full of fragrant strawberry sweetness with explosions of umami from the tomato.

When it comes to alcohol, this can either be incorporated directly into the preserve – or you can consider using your jam in cocktails. A citrus jam turns any gin and tonic into an artisanal cocktail experience – top it with fresh mint and you’re immediately transported to the pool-side of a beach resort. If, like Savlani and Fok, you want to add alcohol direct to the jam during the cooking process, the thermometer is again your best ally. As mentioned, jams only set properly above 100°C, yet alcohol evaporates at 70°C. Fok’s aim is only to add flavour – and doesn’t aim to get tipsy from jam consumption, so it’s only important to pick an alcohol rich in taste that balances well with the fruit mixture. If, however, you’re after a truly boozy jam, you’ll have to follow Savlani’s footsteps and pour in your choice of alcohol once the jam has cooled a little. To compensate for the additional liquid, reduce the jam so it’s thicker than normal.

After spending time with Fok and Savlani, I’m eager to start my own jammy journey. This seemingly intimidating process turns out to be surprisingly pleasant once you understand the basics, and not least for the endless possibilities of mixing and matching ingredients in a pot. A small jar can hold so much significance – countless stories of giving, sharing and boundless exploration and experimentation. It’s a locally harvested lemon from the woman at the fruit stand around the corner from your house, grown by Fok’s friend David at his organic New Territories farm. It’s talking excitedly for an entire afternoon about how cardamom might work magic in an orange jam – and especially if you add a bit of carrot. It’s Savlani slaving away in her industrial kitchen for weeks, jarring 200kg of boozy goop into 750 vessels, just to find out that nothing turned out the way she wanted – and, lightly dusting off her shoulders, she jumps right back into R&D the next day as if nothing had happened. It’s reimagining bacon as jam with a bit of help from caramelized onion and demerara sugar. And it’s getting your face punched in the best way by citrus and berry aromas when you pop open jars of sunshine yellows and ruby reds.

It’s the labour of love in a jar.