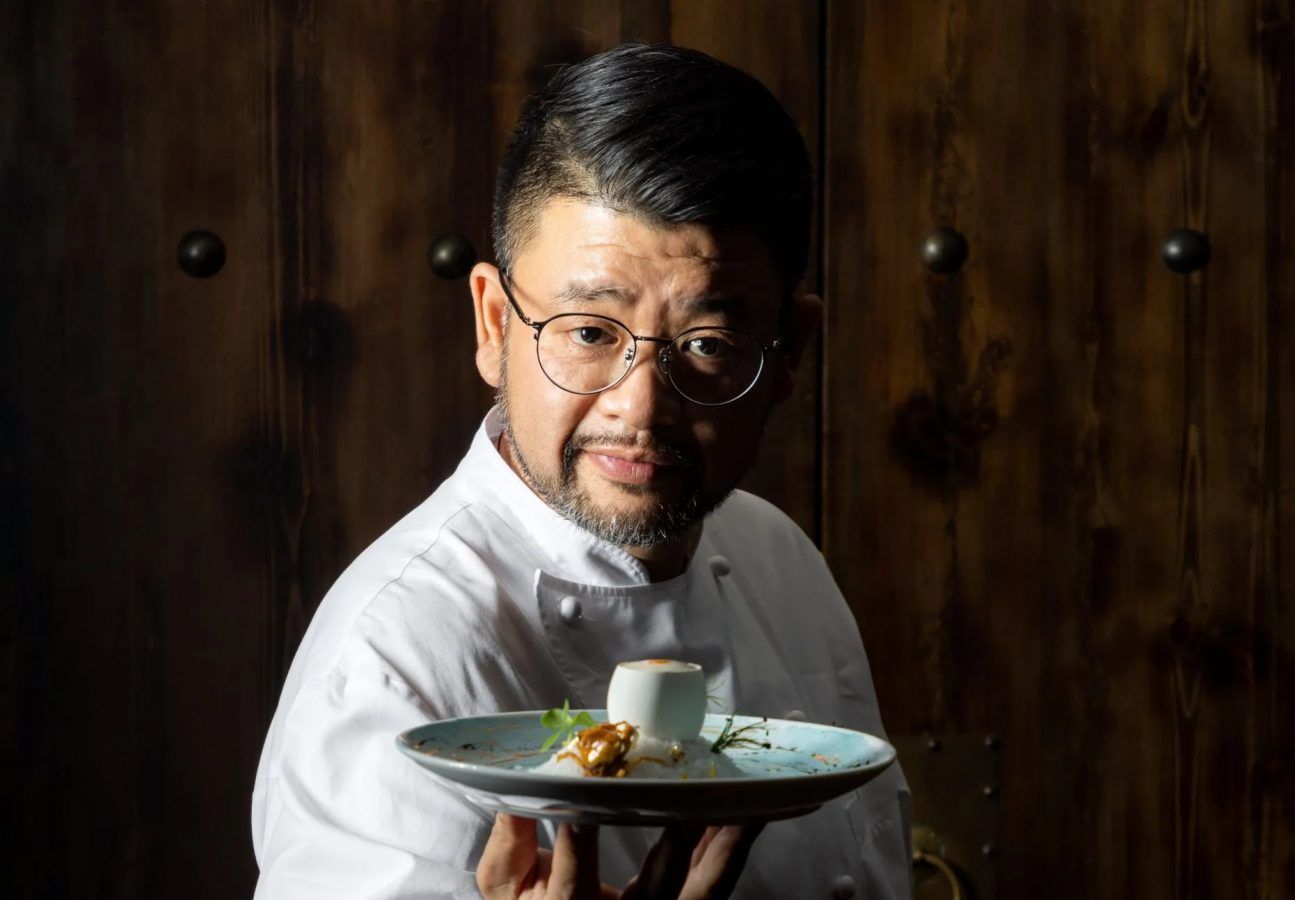 Hidden in an inconspicuous nook in Happy Valley, the neighbourhood restaurant Hong Kong Cuisine has been delighting locals for more than a decade. Since my last visit, however, this charming bolthole has undergone a gasp-worthy head-to-toe revamp, as well as enlisting Silas Li as its new head chef.

Ascending an emerald-carpeted staircase, I find myself in the restaurant’s main dining room where Li awaits me, seated at a table in a glossy brown leather chair. He hasn’t spoken a word, yet exudes a discreet but commanding presence, the kind you experience with someone who’s operating comfortably in their element.

As I sit down, Silas Li offers me a glass of bubbly while swirling a tumbler of premium Henny in his other hand. In the quiet but confident voice that matches his demeanour, he recounts a tale that begins with his first encounters with the kitchen and leads up to his latest undertaking at Hong Kong Cuisine.

“My professional training began when I was 16, but as far as I can remember, cooking has always been a part of my life. My family ran Chinese takeaways in the UK, and after school or on holidays I’d be greeted with the delicious smells of traditional Chinese flavours as soon as I stepped into the kitchen.”

The passion for cooking runs in his blood, and with encouragement from his family to pursue the path less travelled, Silas Li left school and embarked on a culinary course at Brooklands College in Surrey.

He furthered his Western culinary skills with additional pâtissier classes and working weekends at Bachmanns Pâtisserie and Chocolate Creations. Hard work paid off when at the age of 16 he was awarded the Certificate of Merit at the International Salon Culinaire competition. He was one of a handful of teenagers competing against veteran chefs.

Already trained in classical French cuisine, Li then began to learn his way around Chinese cooking during visits to mainland China. There he met chefs and suppliers who demonstrated the use of a wide variety of local ingredients. A Chinese culinary master in Hong Kong later taught Li traditional skills and techniques, all of which he’s now bringing to Hong Kong Cuisine.

Li’s journey as a chef has been anything but conventional – after gigs as a sous chef and head chef in the UK, Silas Li took up a short stint as a commis chef when he moved to Hong Kong in 1997. Dissatisfied with how mother sauces were often bastardised in hotel kitchens, Li took a leap of faith and co-founded the exclusive French dining hotspot One-ThirtyOne, located in a secluded Sai Kung village house with its own boating dock and helipad. The restaurant quickly gained popularity among Hong Kong high-society faces – one guest, Dickson Poon, went on to hire and retain Li as his private chef for more than 20 years. “Working as a private chef was amazing,” says Li. “It allowed me the luxury of creative freedom, a more relaxed schedule than most of my peers, and a large pool of resources at my disposal.”

So what motivated him to leave a dream job of more than two decades to join Hong Kong Cuisine?

“I want to share my knowledge with young budding chefs,” he says. “I want to demystify the stories, philosophies and techniques behind Chinese cuisine, but back in the day this kind of open sharing of knowledge that I’m trying to establish wasn’t the norm at all. It’s led to a lack of interest and accessibility for the younger generation to join the industry.”

Hong Kong Cuisine provided the right opportunity at the right time. Owner Baldwin Cheng, a good friend of Li’s, decided to overhaul his existing concept to address the gradual disappearance of traditional recipes due to a widespread tendency in the industry to withhold trade secrets. Knowing Li’s aspiration of nurturing a new generation of chefs, Cheng asked his friend to create a contemporary Chinese menu that revolutionises well-loved classics while paying homage to Hong Kong’s culinary heritage.

Establishing that new concept came with its challenges. “Finding the right people who not only share my vision and mentality but can execute is extremely important to me,” says Li. “It’s been difficult to assemble a dream team of experienced chefs who are both passionate about food and share my enthusiasm for imparting knowledge.” However, as I gobble down the 20 or so dishes Li and his team have prepared for me, oohing and aahing at the exquisite presentation of each plate, it’s safe to say his dream team is coming together spectacularly.

Exploding with umami savouriness with every bite, Li’s signature Braised Boneless Duck Web Stuffed in Chicken Wings perfectly demonstrates his abilities as a chef. A highly technical dish, the duck web is first braised then deboned, and stuffed into the chicken wing before it’s braised again in the duck web cooking sauce.

“I take great care in creating and combining ingredients, seeing what juxtaposes each other and contrasts best,” he says. “Rich and bold flavours are complemented with those that are light and uncomplicated so as to not overwhelm the palate.” His innovative approach of combining ingredients and Western and Eastern techniques is also exemplified in his Bird’s Nest Stuffed Winter Melon Ball with Roasted Duck Sea Cucumber Sauce, as well as the Crispy Sea Cucumber Stuffed with Tofu Fish Mousse, served with Mapo Minced Pork Sauce. “Seafood is never frozen at Hong Kong Cuisine,” Li explains, and his persistence in using the best and freshest seasonal produce shines through in the gorgeous Eight Treasures Star Garoupa, packed full of fresh and salty oceanic aromas, with flesh so delicate it breaks apart with the softest push of the tongue.

Ending dinner on a decadent sweet note, the extensive dessert menu is equally inventive and full of surprises. My favourite turns out to be the Chinese Sugar Egg Puff: a cross between a cream puff and a doughnut. It’s Li’s re-interpretation of a nostalgic treasure. By replacing the traditional soda-water recipe with an airy choux pastry, Li’s version is a heavenly bite of deep-fried goodness filled with a rich silky crème pâtissiere. Another must-try is the dreamy Panna Cotta, made from fresh creamy buffalo milk from Shunde, served with Taiwanese Irwin mango and topped with a flaky savoury sesame tuile biscuit. Li ends the evening by generously offering his premium cognac to all who crave a taste. Blown away by the countless stunning dishes consumed greedily throughout the night, we push the chef with more questions. His conclusion: “These dishes symbolise the vision we hold here at Hong Kong Cuisine, putting innovative presentations and an interactive dining experience on to the table. Playing with Hong Kong’s East-meets-West heritage, we stay true to the essence of Chinese cuisine by putting the balance of taste, temperature and timing at the heart of these dishes, while opting to present them in a more Western fine dining style.”

Under Chef Li’s leadership, dining at Hong Kong Cuisine is so much more than a meal. From start to finish, the dishes, more art than food, combine harmoniously like a symphony that will have Hong Kong diners flooding to the revamped restaurant’s doors. And I’ll be there among them, fighting to be the first to try every new plate Li adds to its menu.