Discovering A New Era of Sushi at The Araki Hong Kong

There’s something wonderfully poetic about the art of sushi. As I watch one of the world’s most celebrated sushi masters at work in his new restaurant, I’m captivated by his movements.

Chef Mitsuhiro Araki takes his knife to the tuna with precision. He swiftly dabs on wasabi and begins a dance-like motion of pressing and flipping rice and fish, before gently brushing the final product with soy sauce. Finally, it’s placed delicately from his hand into mine, and eaten in one bite, setting off its own beautiful haiku dedicated to flavour.

My love of sushi knows no end, especially when it comes to sushi as good as Araki’s. In fact, I could probably smother his sushi with superlatives until Sunday next week, but what I really want to tell you is how he’s changing sushi and what it means to take it to the next level. Araki’s style of sushi is Edomae, a 200-year-old tradition where Edo, the ancient name for Tokyo, and mae, meaning “in front of”, references a traditional use of local ingredients from around Tokyo Bay. Edomae also points to the methods of preservation, as refrigeration technology had not then been invented, so sushi chefs developed techniques to prolong the shelf life of seafood, while retaining and enhancing its flavour.

The traditional Chinese technique is to dry seafood in the sun, but the Edomae way is to pickle, marinate, simmer or steep in broth and sauces. It’s then served as sushi, atop rice characterised by red vinegar and its subtle savoury taste.

Today, Araki remains deeply respectful of this philosophy and translates its traditions to create a new cuisine that makes use of local produce, wherever in the world he happens to be. In Tokyo, he mostly uses local ingredients or tuna from the Japan Sea, while in London wherever possible he sources seafood from Scotland, Cornwall and other British waters. It’s all about preserving – both the traditions and fish stocks – through sustainable methods. 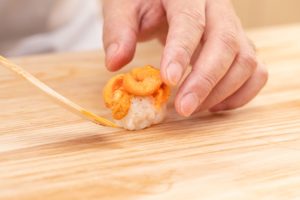 To meet Araki, I venture out to his new restaurant, which is tucked away in the refurbished heritage building House 1881 in Tsim Sha Tsui. Like several other high-end sushi restaurants in Hong Kong, it has an interior with elements of Zen, its 12 seats surrounding a blonde-wood bar at the centre. It also offers omakase – or the chef’s menu – in two sittings. It’s not until I meet the sushi master that I notice a real difference here.

Soft-spoken, he smiles kindly before bringing out Marty Lau, his British-born Chinese chef and protégé who currently runs The Araki in London, to translate. The trust and respect between the two reveal their closeness.

“Previous generations of chefs have believed that sushi can only be made by Japanese people,” pronounces Araki. “I want that idea to disappear. The sushi chef shouldn’t be judged by his nationality or his skin colour, but rather by his soul.” 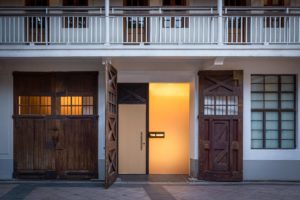 This rings true in his own team. With a cosmopolitan mix of apprentices from places such as mainland China,Hong Kong, the UK and Poland, he’s evidently not like other traditionalists of Japanese sushi. “It doesn’t matter if the skills don’t come naturally – time will solve that,” he says. “The real question is whether you can last that time.” As proof, he’s closed The Araki in London for two weeks so the team can fly in to help him prepare for the opening in Hong Kong.

When asked about his inspiration, Kyushu-born Araki tells me it began with a grandfather who worked for the Japanese consular service as a Western chef. This intrigued the youthful Araki, and after high school he took the opportunity to train as a Western chef too, only to find that he was asked to cook Japanese food instead.

In 1990 he moved to Australia, where he found an abundance of chefs who were inspired by Japanese cuisine. It was then that he
recognised the full potential of Japanese cuisine and set his sights on mastering it. Before long, he became more serious and chose the most revered – and arguably most difficult – path: that of becoming a sushi chef. He achieved this at Izumi in Tokyo’s southwest district of Meguro, where he trained under the restaurant’s grandmaster for almost a decade. After that, it was the legendary Niitsu Takeaki – sometimes referred to as the Sushi Emperor – who polished and prepared Araki for success. In 2000, he opened his own restaurant in Setagaya and 10 years later moved the restaurant to Ginza, where it almost immediately gained three Michelin stars.

Never one to settle, Araki decided in 2013 to move to London and three years later the London outpost was awarded its first Michelin star. After two more years it had gained three. 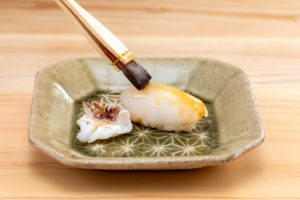 Araki now turns to art for inspiration, as well as scenery and music – that is, anything beautiful. According to Lau, “Master always teaches his apprentices that anything that’s beautiful to you should be a source of great inspiration. After that it’s about how you can make people feel the same way as you did at that precise moment through your craft.”

I asked about the Michelin stars that have followed Araki from Ginza to London, and whether he thinks they’ll now follow him to Hong Kong. “If you can get a star, of course it’s nice to have. It’s a reward,” he said. “For me, the real stars are the customers. It starts with one customer, and then two, and you keep building until you have six months of a fully booked restaurant. But it will always start from that one customer.” I began to understand how Araki sees the importance of return customers. “If you can convince them,” he said, “they’ll take that experience away. It stays with them. That’s the most rewarding.”

In Hong Kong, Araki’s search for high-level local ingredients continues, and so far he’s discovered items that will be familiar to locals here. One example is a dish created with three Chinese delicacies, a combination of Japanese dashi with bird’s nest and fish maw that makes for a lush and thick sauce, full of umami and collagen. It’s cooked to the perfection that even a local Chinese would approve of and then topped with tender slices of local abalone.

Although Araki’s technique and skills are already at a level that warrant Michelin stars, it’s still exciting for him. “I’m still studying the culture, people, food, produce and how it’s all interconnected” he says. “There’s still so much to discover.”