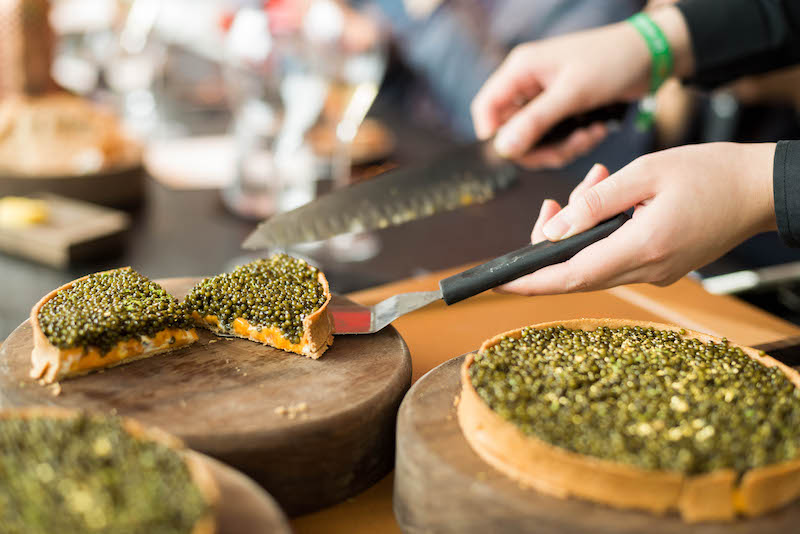 As the heat turns up in Hong Kong, we naturally turn to cooler and more refreshing dishes — and there’s nothing quite like a ceviche that screams summer. At one of Ichu’s first-ever four-hand collaborations, we sampled dishes created by their very own Chef Sang Jeong and Chef Emanuel Alvarado from Crab Market in Dubai, and found an intensely bright, zesty ceviche that did just the job. Using fresh yellowtail bathed in a punchy leche de tigre with yuzu, the sharp and spicy flavours are sprinkled with a little sweetness from large Peruvian corn (or choclo) and sweet potato crisps. It makes us wonder what they have in store for their second four-hands menu with Chef Ferran Tadeo of La Rambla from 5–8 May too.

Caviar and Uni Tart at Écriture

Everything tastes better with caviar, which is why the Écriture x Royal Caviar Club collaboration menu has been the talk of the town for weeks now. The five-course meal begins with the star of the show — an iconic pairing of creamy Hokkaido sea urchin with celeriac whipped cream on a buckwheat shell tart, topped with a ridiculously generous amount of Cristal caviar (a Royal Caviar Club hybrid blend of pickled roe of mature 8-year-old sturgeon). Oh, and did we mention that it’s finished off with a light yet decadent beurre blanc sauce? Écriture sets a pretty high bar with this dish when comes to over-the-top indulgence.

Another chef collaboration took us to another Asia’s 50 Best restaurant — VEA — which also retained its Michelin star in 2019. This time, Chef Vicky Cheng’s partner was 2018’s best female chef in Asia, Bongkoch “Bee” Satongun of Paste in Bangkok. Together, they created a degustation menu which we were lucky enough to preview. There were some incredible dishes packed with flavour, but the one that struck a chord was the braised daikon. Here the mild-flavoured radish was brought to life in a one-and-a-half-year-old master stock before being fried crispy, while a perfectly cooked Taiyouran egg sits atop and is dressed with truffle.

During the four-hands collaboration between Chef Eric Räty of Michelin-starred Arbor in Hong Kong and Chef-Owner Noboru Arai of two Michelin-starred Hommage in Tokyo, we were treated to inventive flavours that were also visual delights — one of which was a dish featuring produce from Okinawa. As enjoyable for the eyes as it was pleasant for the palate, the distinct flavours and texture of sweet corn ice cream and the pop of savoury sea grapes were blended with the tropical tang of passion fruit for the perfect little meal teaser.

It’s not often that we attend repeat afternoon tea collaborations, but Salvatore Ferragamo’s fashion inspired set is too delectable to miss. Curated by Mandarin Oriental Macau’s Executive Pastry Chef Sebatien Bernis, the cake selection draws from the Italian house’s classic pieces such as the Varina ballet flat, which is paired with Vara mousse cake and the Amo Flowerful fragrance which was turned into a fragrant panna cotta. Our favourite morsel was the Gancini chocolate cake inspired by Ferragamo’s iconic Studio bag with Gancini pattern that hides a chocolate cake underneath. Guests were also gifted a complimentary souvenir from Salvatore Ferragamo at Once Central Mall. Now if that isn’t worth crossing over to Macau for, we don’t know what is.

We know what it sounds like, and we’re right there with you in wondering why the newest hotpot spot in Causeway Bay is offering handmade Italian pasta. It turns out that JPOT is a combination of Chinese hot pot traditions, the freshest ingredients (such as Hiyama Kuroge Wagyu) and some Western accents along the way. In a special preview for the tasting menu, we were able to sample just that — freshly made fettuccine, cooked perfectly al dente and draped with a thin slice of Wagyu sashimi.