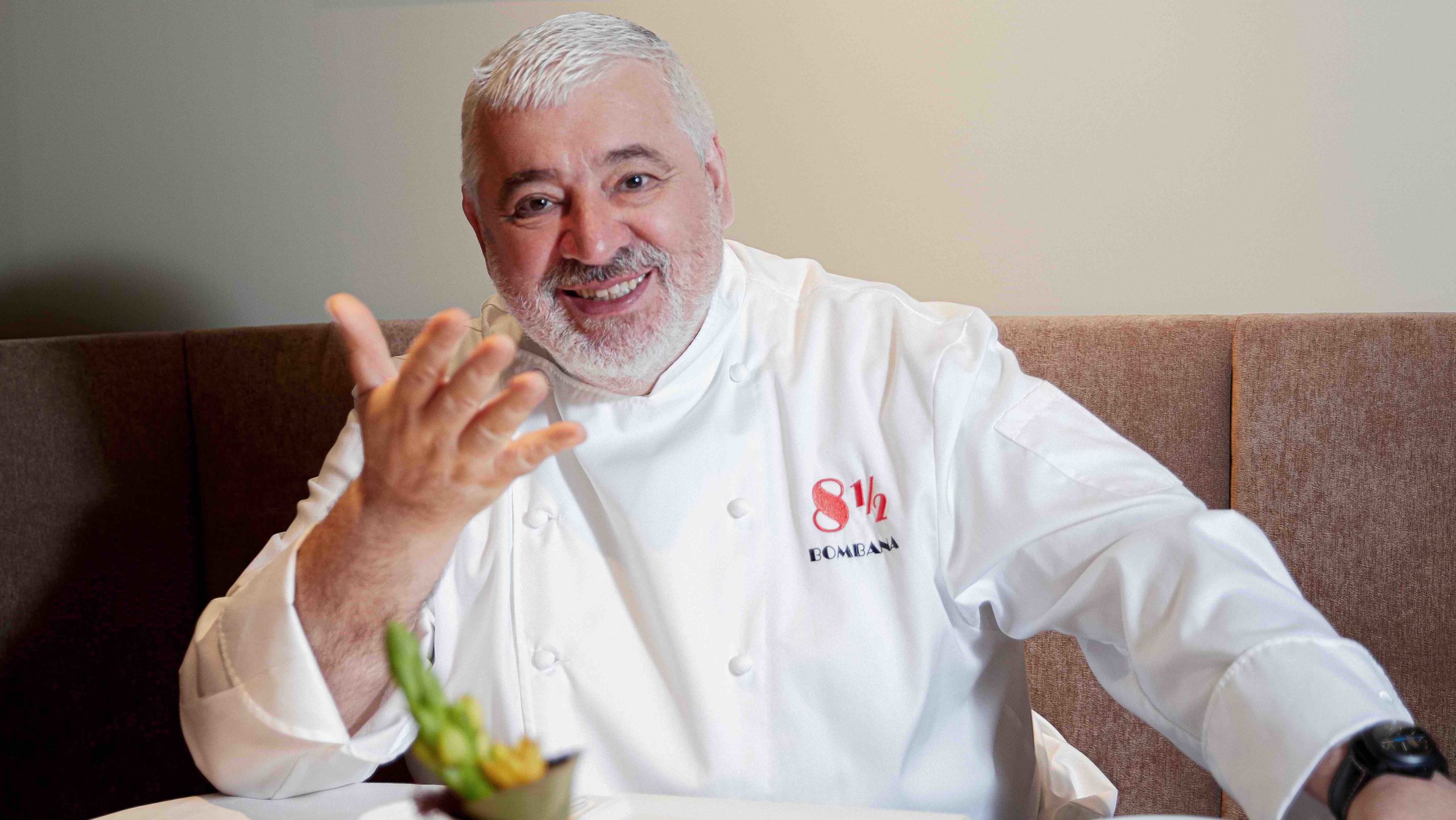 In a world full of fads and quick trends, Italian chef Umberto Bombana of the three-Michelin-starred restaurant 8 ¹⁄₂ Otto e Mezzo Bombana remains classic. We talk with the man himself to explore the world of timeless Italian cuisine and why the comfort it brings means so much to us all.

Throughout my London-based childhood, there were restaurants that embedded themselves deep into my food memories. There was a small hotel carvery offering gravy-soaked roast meats and heaps of chilled seafood and prawns, and I remember a Chinese restaurant with speedy cart pushers shouting orders over stacks of steaming dim sum. These are the places that take me back to a simpler time. Sure, they enjoy the bias of being the source of my greedy adolescent appetite, but even when the mountain of prawns became a measly four and the trolleys all but disappeared, there’s something about them that still bring me an immense amount of comfort.

We all have them, these classic restaurants that we return to for a taste of a memory. That is, if we’re still able to, and they’ve miraculously survived the harsh realities of the industry. When I meet Italian chef-owner Umberto Bombana of the three-Michelin-star 8 ¹⁄₂ Otto e Mezzo Bombana, who’s hailed the King of White Truffles due to his work at charity auctions featuring the prized fungi, I realise that there’s a sense of something similar in his cuisine, and it’s the need for classics.

If you haven’t met Bombana, you needn’t worry about spotting him in a crowd as you’ll instantly know who he is. His presence commands the room and he has one of those faces that feel incredibly familiar even on first meeting. He smiles kindly as he greets me, shakes my hand firmly and tells me his story nuanced with a lovely, sing-song Italian rhythm.

“I’m from outer Valle Seriana, which is a very active valley on the outskirts of Bergamo. My hometown of Clusone, where I was born and grew up, is where many Italians buy second homes for holidays and weekends. As a child, I was always outside and in the mountains. It was very beautiful growing up there.”

He gets nostalgic over his childhood memories, telling me about his “duty to feed the rabbits and chickens – but I won’t tell you what happened to them after that”, he says with a laugh. “We also grew our own vegetables in the garden and I loved that. I worked on the garden with my grandmother. We grew beans, zucchini, eggplant and tomatoes, all organically”

A passion for fresh produce and ingredients naturally led Bombana towards the kitchen, where he was also inspired by his grandmother who spent numerous years cooking for an aristocratic family. Growing up, he reaped the rewards of his relatives’ culinary traditions as well as the landscape that surrounded him. “My favourite was my grandmother’s homemade pasta – gnocchi, pumpkin ravioli – and the chocolate salami she made on special occasions.” As his father came from Mantua, he was also able to enjoy another region’s traditions and savoured dishes such as “grilled pork ribs, and cotechino [a large Italian pork sausage]”.

After finishing hotel school, Bombana cut his teeth at one of the most acclaimed Italian restaurants of that time, Antica Osteria del Ponte, with chef Ezio Santin. Thereafter, he moved to America to work with celebrated Italian restaurateur Mauro Vincenti of Rex il Ristorante in Los Angeles, which was a regular venue for post-Oscar parties. He followed this with stints in the kitchen with other top chefs, including Gianfranco Vissani, Pinuccio Alia and Michel Rostang.

Memories of being a young chef seem to remind him of some tough times. “It’s a rough environment and a stressful job. The long hours, standing all day. Guests sit down and want to eat pronto,” he says, knocking on the table – and then grins and adds, “but I like it.”

Bombana eventually moved to Hong Kong in 1993 where he ran The Ritz-Carlton’s Toscana until the hotel in Central closed down in 2008. Two years later, he opened 8 ¹⁄₂ Otto e Mezzo Bombana and named it in honour of his favourite Italian film director Federico Fellini’s 1963 autobiographical movies 8¹⁄₂, which sees the director retreat into his own memories and fantasises.

He describes his cuisine as “sharp and straightforward”. His concept is simple and champions the ingredients. “That’s what I try to create,” he explains. “I want it to be straight-to-the-point, so you can enjoy the flavour of the ingredients, and I want it to be sharp, meaning that it’s cooked to perfection.” There’s no doubting the skill of execution here, but it’s the classics that many of his regulars come back to the restaurant for. “People come here to have specific dishes. If I take away some of those dishes, I’ll lose clientele.” Even so, Bombana understands the importance of proposing new or seasonal dishes to keep guests interested and will use fresh ingredients such as morels and white asparagus, which feature on the degustation menu this month.

The dishes that people return to Bombana for are plentiful. Highlights include a short rib and beef tenderloin, which comes dressed in a soul-soothing plum beef jus that induces a request for more; a perfectly cooked ravioli heartily stuffed with creamy burrata cheese and topped with fragrant Japanese eggplant and tomato sauce; a fresh and delicate line-caught sea bass brimming with the briny charm of Japanese clams, squid and razor clams before it’s brightened with zingy lemon; and a soft tender baby lamb dish ripe with fresh and confit vegetables, in addition to a rich luscious lamb jus that amplifies the freshness of the meat.

“They become classic because they’re good. For people who are looking for classics, these dishes are perfection. There is and always will be change. But the classics, they are timeless.”

Bombana’s thoughts on the classics also inform his Italian wine selections. “Even with wine, you’ve got to have the classics,” he says. “You need to have the best Barolo, Super Tuscan and Amarone.” At the same time, his curiosity and fascination with the new, different and indigenous grapes of Italy appear on the wine list as glasses of La Cappuccina, Rondinella, Nebbiolo and Sangiovese, to name a few.

Classics bring us comfort, and this is perhaps why so many turn to classic Italian cuisine. “Because it’s catered to the family,” says Bombana plainly. The simple act of sharing and eating together will always bring a sense of emotional elevation. But it’s the refinement of this comforting cuisine that garners its returning audience and the accolades worthy of stars.

If I were to ask you for your favourite restaurant, more often than not, it will be the ones you have warm fuzzy feelings for. Where the food is seasoned with sentimental value and evoke a pang of nostalgia with every bite. The reason to return – sometimes to order the exact same dish – is to recall those feelings and memories, but at the same time let us enjoy and live in the moment. And with the world stifled in these trying times, what we really need are restaurants we can rely on. Restaurants that remain constant, when we need them the most.