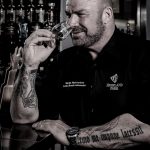 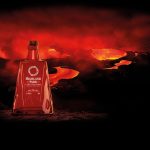 A heavenly realm of fire and legendary figures who oversee the outcome of battles provide the mythological background for two new special-edition single malt whiskies from Highland Park. With its home in the islands of Orkney, off the north coast of Scotland, Highland Park comes with a proud Viking heritage, which it honours throughout its range of whiskies.

“We like to combine whisky with stories,” says Martin Markvardsen, Highland Park’s senior brand ambassador, and new release Fire, accompanying last year’s Ice, has quite a story behind it. It celebrates the giant Surtr, from the fiery realm Muspelheim, who goes into battle against the gods of Asgard, setting the world aflame in the process.

Fire is the first Highland Park whisky to be matured in port casks, and the port and American oak help to create a whisky with a more pronounced sweetness than most in its range. It’s followed by spices including vanilla, and then honey and fresh berries, which replace the usual dried-fruit notes on a long, long finish.

“Everything we do with these kind of things starts off as an experiment,” says Markvardsen. “When we fill up a cask, we have no idea what we’re going to end up with.”

After covering the pantheon of Norse gods in its Valhalla Collection and the heavenly realms with Ice and Fire, Highland Park moves onto another aspect of Norse mythology with its latest series of special releases, Viking Legend. The first release, Valkyrie, is inspired by the women who decided which warriors lived or died in battle. It’s made using bourbon casks from the US, along with heavily peated malt for a smokier flavour and an immediate kick that quickly mellows into sweeter notes.

It’s also notable for its stylish packaging, with the subtle use of Viking motifs, the work of Viking expert Jim Lyngvild. “His knowledge of the Vikings is amazing – he traces his own family back to them – and his design skills are unbelievable,” says Markvardsen.

The two future Viking Legend whiskies – Valknut and Valhalla, named after the triangular Viking symbol and the heavenly realm of slain warriors respectively – will be released at 18-month intervals.

The Viking theme now also extends to Highland Park’s age-statement whiskies. The latest is the 12 Year Old, which now also bears the name Viking Honour, alongside redesigned packaging – although the precious liquid inside the bottle remains exactly the same.