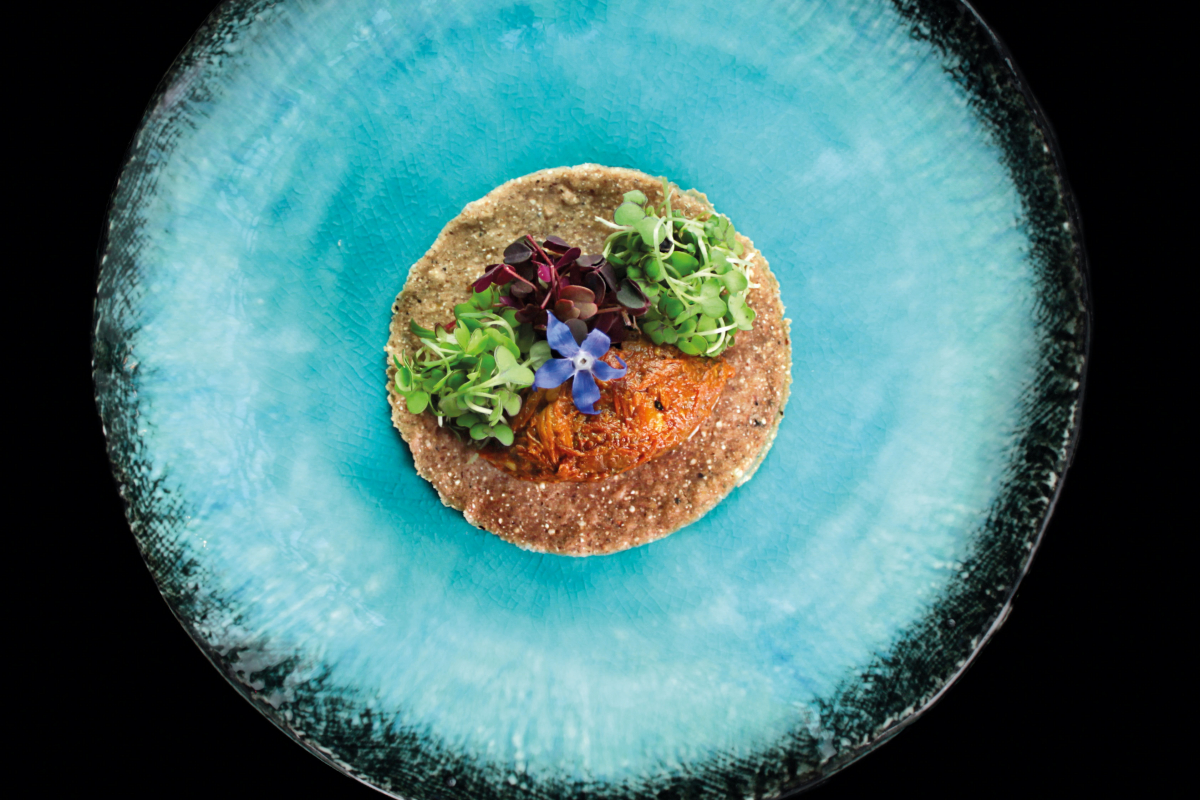 Caiman, Capybara and Pirarucu. Such inhabitants of the dense Amazon rainforest are rarely glimpsed outside their natural habitat. These days, though, adventurous foodies can experience them on the plate at Leo, the namesake fine-dining restaurant of Colombian chef Leonor Espinosa in the country’s sprawling capital, Bogotá.

In Espinosa’s deft hands, a sliver of Caiman (a reptile similar to an alligator) meat, the most delicate of its kind I’ve ever tasted, is painstakingly wrapped around a reduction of cassava extract and cooked in a bowl of peach-palm custard. Pirarucu, one of the world’s largest freshwater fish, is marinated with sour yucca, cacay nut and ojo de pez pepper and resembles ceviche with the texture of chicken sashimi. And capybara, the world’s largest rodent and an Amazonian delicacy, is cooked in a rich, meaty stew with native red beans and garnished with a strip of crispy crackling. Its gamey flavour, reminiscent of pork and rabbit, packs an umami punch that is familiar yet foreign all at once.

By the end of my 15-course Ciclo-Biome dinner at Leo – ranked 18 on the S.Pellegrino list of Latin America’s 50 Best Restaurants – it’s as if I’d gone on a whirlwind trip through the country’s diverse ecosystem. Widely regarded as the high priestess of fine Colombian cuisine, Espinosa has made it her life’s mission to introduce her country’s bounty of exotic flora, fauna and gastronomic traditions to the rest of the world. “My idea was to take traditional dishes and introduce them to a wider public, without losing the essence of what they were originally about,” she says.

Throughout Latin America, many of the region’s culinary stars are embracing a similar ethos by aiming to nourish, satisfy and educate the palate in a single meal. In Lima, arguably the gastronomic capital of the continent, chef Virgilio Martinez of Central restaurant is quite rightly the wizard-scientist of Peru. His exploration of the country’s immense biodiversity has resulted in a menu featuring ingredients sourced from a mind-boggling range of altitudes, from 20m below sea level to 4,100m up in the mountains. It is probably the only restaurant in the world where one can feast on crispy piranha skin as well as heritage potatoes and tubers (with a side of shaved alpaca heart) from the Andes mountains in a single seating.

Equally illuminating, though somewhat underrated, is chef Mitsuharu Tsumura’s menu. His Japanese-Peruvian dishes at the stylish Maido restaurant in Lima – first on the Latin America list and eighth on the World’s 50 Best Restaurants list – are a vivid embodiment of fusion food. Termed Nikkei cuisine, this genre melds Japanese cooking techniques with Peruvian ingredients and dates back a century ago when Japanese farmers migrated to Peru. Today, Nikkei cuisine is so much a part of Peruvian culinary consciousness that many meals are eaten with rice and previously ignored seafood such as octopus and scallop are commonplace in the country.

Guinea pig is traditionally roasted whole to impart an earthy smokiness to the meat and is served in its entirety (face included). “I generally find that the street-food version still has the true heart and essence of the dish,” says foodie traveller Victor Dizon, co-founder and director of A2A Safaris. But its appearance and the psychological barrier many have to overcome to eat rodent meat, can be a deterrence. “Maybe not enough people are willing to try local food in the street environment, so I think the fine-dining version can at the very least introduce the dish to such folk. The nice ambience certainly helps people become more adventurous.”

Sometimes, comfort fare, elevated to fine dining standards, is exactly what a weary road warrior needs. A case in point is Criollo in Oaxaca, the street-food Mecca of the country. While chef Enrique Olvera of Pujol fame lends his star power as a partner, it is another chef, Luis Arellano, who directs the menu here, the waiter tells me during my visit. “I think Criollo is our anchor in tradition and in Mexican food,” says Olvera.

Here, guacamole is prepped à la minute by mixing mashed avocado with generous bunches of aromatic herbs; a juicy mango salad is tossed with heirloom tomatoes, watercress and fresh Oaxacan cheese; and tacos are heaped with tender shredded suckling pig, black-bean sauce and local herbs. Every dish is beautifully balanced. With each course, one can almost hear Arellano proudly proclaiming, “See how elegant our humble regional cuisine can be?”

For a sign of how progressive Latin American cuisine can get, head to Ali Pacha in La Paz. Perched high up in the clouds at an elevation of 3,640m, the capital of Bolivia can feel somewhat detached from the modern world. Tucked among greasy fried-chicken joints in the bustling, chaotic city centre, is Ali Pacha, a fine-dining vegan restaurant.

This gem of a find, rare even in the international culinary scene, is helmed by Bolivian chef Sebastián Quiroga. His culinary pedigree shines through at Ali Pacha, with his delightful and spot-on vegan interpretations of Bolivia’s meat-heavy cuisine. Meals here start with sourdough bread and the most irresistible coconut butter ever made – every table orders seconds. To showcase the region’s endless variety of corn, Quiroga turns out a deceptively simple-looking pepper tamale and corn soup that’s garnished with crispy dehydrated corn husk and fried corn crumbs.

Then there is the highlight of the meal, beet ceviche. Sliced beets are marinated with lime and fruit juice to give it the firm texture of raw fish while the canny addition of ginger evokes the sense one is eating seafood instead of vegetables. By the end of the five-course meal, we’ve cycled through all flavours the human tongue can taste, from sweet, sour, salty and bitter to spicy and umami, a feat that even regular restaurants will find hard to achieve. My only regret – that I didn’t skip lunch to make room.