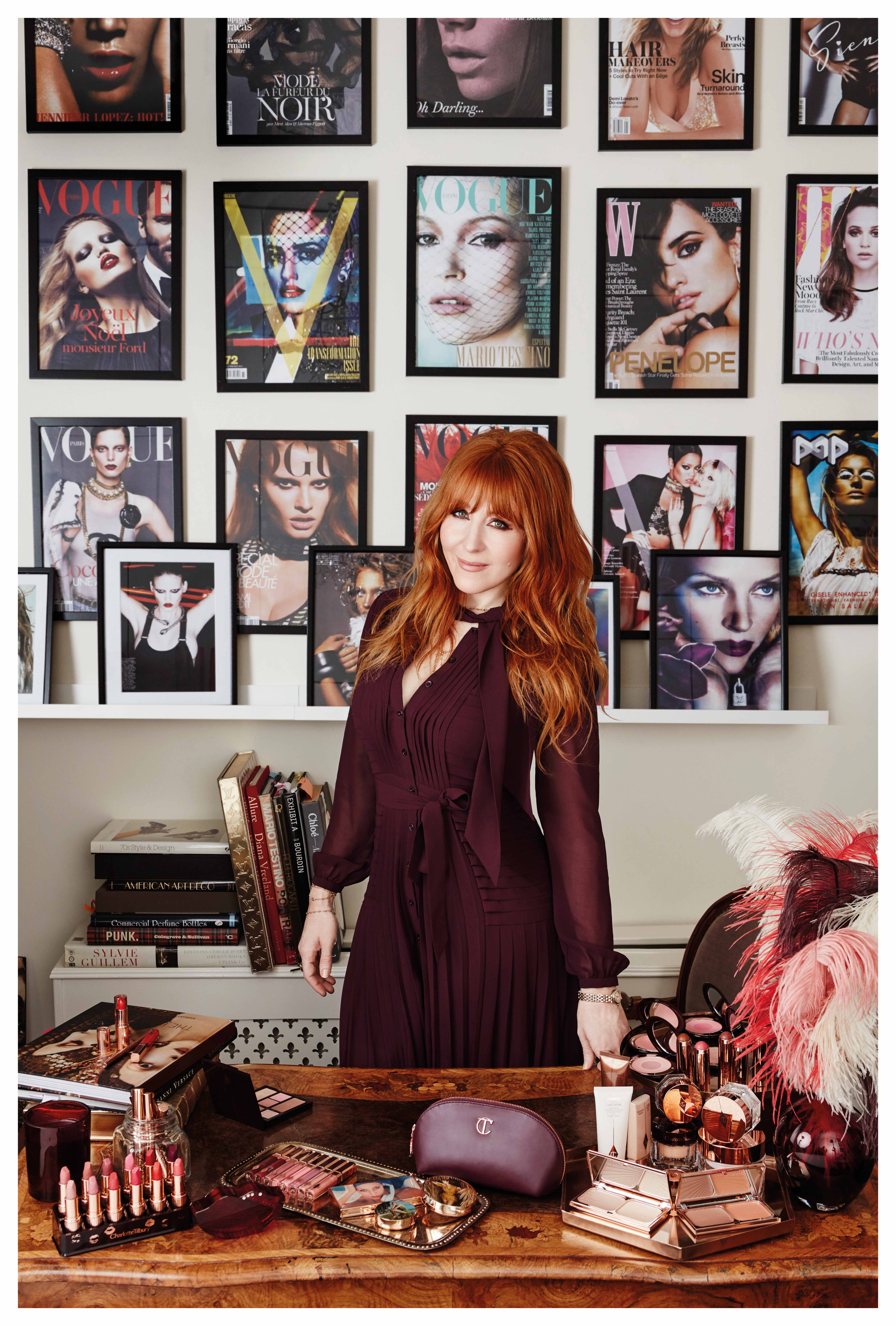 The magic of Charlotte Tilbury isn’t a secret-weapon cream, or a dramatic smoky eye, or a celebrity-endorsed lipstick. The magic isn’t in well-curated and formulated eye shadow quads, or in easy-to-follow make-up look manuals. It’s not in highlighter so luminous that it’s visible from outer space, or in invisible powder that keeps foundation in place all day, all night and till the end of time and humidity.

The magic of Charlotte Tilbury is Charlotte herself – in her execution of well-placed compliments, in her talent for banter and gossip, in her winning projection of beauty and positivity. Is it rehearsed? Perhaps. Is it effective? Most certainly. Charlotte Tilbury knows exactly how to make a girl feel good, and she’s generous with her ability.

It’s day one of Tilbury’s visit to Hong Kong to promote her eponymous skincare and make-up line, long available online and in a large number of global beauty emporiums, which is finally getting its own Lane Crawford counter this April. We are seated in the Apartment Suite of the Landmark Mandarin Oriental, and it resembles not an apartment, but the most fabulous beauty studio you’ve ever seen: a circular bathtub brims with gift sets; the coffee table is overflowing with the most comprehensive Instagram beauty flatlay mankind has seen; a dining area has been transformed into a backstage make-up station with room for four models; and somehow a photo booth – nay, a “content studio”, as one of Team Tilbury corrects me – has been erected, encompassing two light boxes, a ring flash, a huge crimson lip-shaped couch and multi-coloured lip-print wallpaper.

Tilbury curls up on another couch, nearer the coffee-table extravaganza, like we’re already best friends — there’s grabbing of hands to examine my rings, an immediate analysis of my current eye look, and before I know it, I’m showing her my favourite Instagram make-up stars and telling her she must, must get a spot as a judge on RuPaul’s Drag Race. I have fallen under the Tilbury spell.

And I’m not the first.

Tilbury knew from age 13 that she was going to be a make-up maven. She makes it sound easy: “I had very fair eyelashes, and I discovered the power of mascara, and it changed my life. It had a huge effect on me – everyone was like, ‘Oh my God, you look really different.’ It was a real moment of realising how powerful make-up can be. And it was in boarding school that I came up with ‘the looks’.” “The looks”, of course, are a cheat-sheet of 10 different personas that can be created with make-up products, from the wide-eyed Ingenue to the red-lipped Vintage Vamp to the bronzed Golden Goddess.

“I didn’t have the names, but you could see certain social archetypes that you wanted to create,” she says. She went on to be a make-up assistant, then started doing fashion shows and magazine-cover shoots, graduating to consulting for Helena Rubinstein, before helping to build Tom Ford’s make-up “from a piece of paper upwards. And that’s when I realised, I always created products for other people’s brands.

“But I always had this knowledge that people were asking, how do I get that look you did for Kate Moss, for Gisele, Cara Delevingne, Gigi Hadid. And I had to give women that make-up wardrobe. Someone like Jennifer Lopez will change her outfit and make-up every day. I was the first person to come with this look system – it was an obvious thing that just no one had ever done.”

That was six years ago, and when Charlotte Tilbury launched her own make-up line, “it broke every record in the Selfridge’s book, which is massive. We had 200 people queueing on day one, because I’d been on Youtube talking about my Magic Cream.”

It was a cure for haggard celebrity skin, which is oft subject to layers of stage make-up, lack of sleep and the havoc of constant travel. It was an instant plumper that her own clients likened to magic. She became like a drug dealer of this mystical moisturiser, doling out small pots of the stuff and living in fear the formula would be copied and stolen.

“It’s immediate. You put it on and it gives you the most plump, glowing base,” she says. “It’s a great name, but I didn’t come up with it – it was people asking me for my ‘secret magic cream’. It became a thing of legend. When I did my videos I would tell people to buy La Mer or La Prairie but then I would use my Magic Cream and in the videos they could see the skin transformed. In America when we launched, we sold out in six minutes. Before we launched on Net-a-Porter you could only get the cream by becoming a VIP, and I was at George Clooney’s house and a stylist told me, I bought clothes only on Net-a-Porter just so I could get a little pot.”

Is it strange that a make-up artist’s top seller isn’t actually make-up at all? Tilbury shakes her head. “If you do not have a beautiful canvas, your painting will not look good. For me, I get obsessed with Gisele Bundchen’s skin, and I want to bottle it. In fact, I bottled all the celebrities I worked with.”

It all began with Kate. Tilbury was mixing a custom nude using lipstick and concealer for Kate Moss that was receiving so many compliments, it demanded a place as a permanent product. With Moss’ permission and as a tribute to it wearer, Tilbury named it Nude Kate.

“Other people – Sienna Miller, Victoria Beckham – they asked, she’s got a colour, how come I don’t have my colour? A lot of them I had banked colours for, so we did the Hot Lips collection, and they all did it for free and we gave money to charity.” The colours range from Carina Lau’s fire-engine red (Carina’s Love) to Salma Hayek’s dusty rose (Secret Salma) to Emily Ratajkowski’s shocking coral (Hot Emily).

Given the Asian beauty market is “all about lipsticks and skincare”, Tilbury is excited and confident to launch a bricks-and-mortar presence in Hong Kong. “I thought, oh my God, my brand is going to do great here! Magic Cream and lipsticks are my best-selling products. We’ve already had people try to pirate my brand out here …” Which, as we all know, is the surest sign of success.

Are Asia exclusives part of the plan, as they are for many big brands looking to cash in on the China dollar? “I wouldn’t do it just for the sake of doing it,” she says, though she’s switched out one of her 10 looks for the Asia-oriented Radiant Beauty (which entails dewy skin, winged eyeliner and a China-red lip).

What is on the agenda, then? “Facelift in a bottle. It will come,” she says. That, and that guest-judge gig on RuPaul’s Drag Race. “OK. You’ve been saying it for ages,” she points to her niece, who’s come along for the trip. “Let’s do it.” Something tells me a few drag queens are about to have a new best friend – and a make-up awakening.