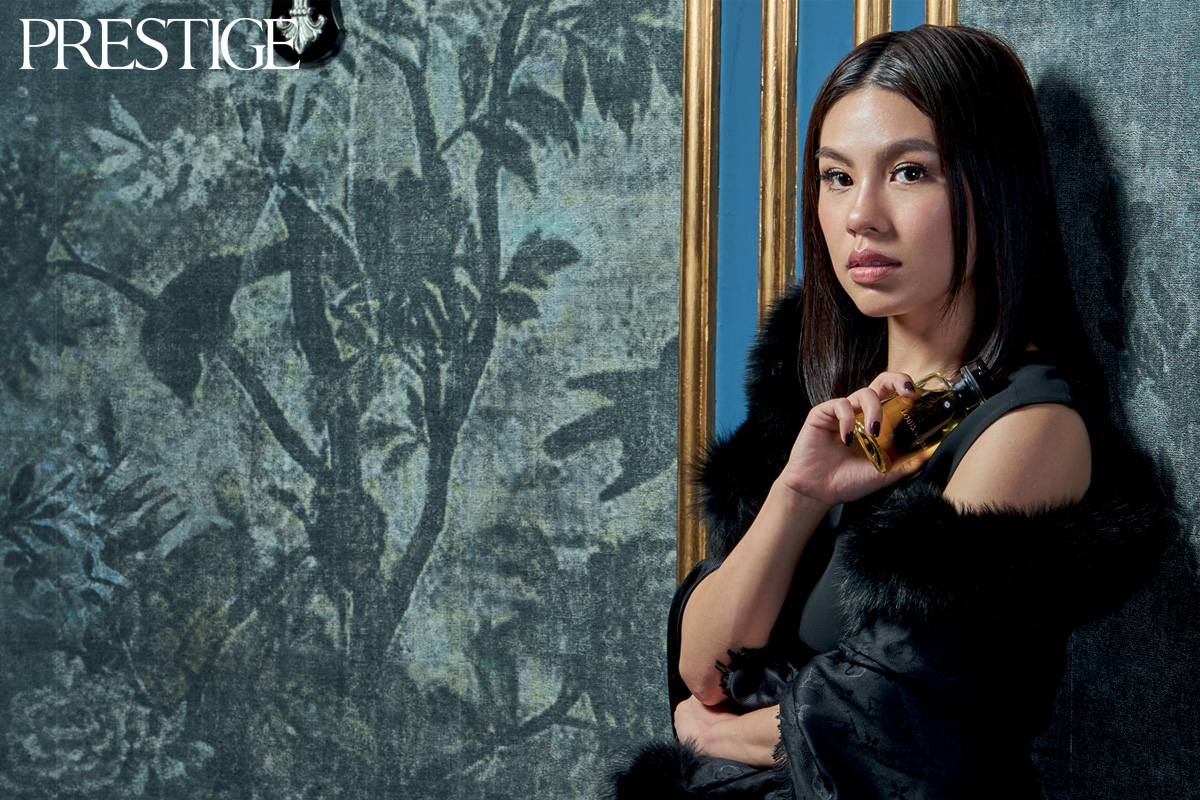 With the creation of its first trunks in 1854, a hint of perfume already lingered in the air at Maison Louis Vuitton. Designed to protect the most fragile objects during long journeys, that luxurious luggage came with padded compartments for scents.

Later, in the 1920s, the maison called upon artists to design decorative motifs for engraved crystal bottles. Encouraged by the success of these collectibles, in 1927 Louis Vuitton launched its first fragrance, Heures d’Absence. This was followed by Je, Tu, Il in 1928, Réminiscences and Eau de Voyage in 1946.

Les Parfums is the brand’s first new collection of fragrances in 70 years, made possible by the acquisition of a creative atelier in Grasse, in the Provence region of France. The seven fragrances that comprise Les Parfums were created by House Perfumer Jacques Cavallier Belletrud.

During a day-long shoot at Da Vinci on Sudirman, we asked Kelly Tandiono, Shalvynne Chang, Olivia Lazuardy, Stella Lowis, Angel Pieters, Millane Fernandez and Tatjana Saphira to tell us about their favourite perfumes, what they like most about Louis Vuitton and what projects are keeping them busy these days.

“Louis Vuitton is timeless. It’s been one of my favourite brands since I was a kid,” declares the multitalented
model and actress. “I tried Matiere Noire from the new collection, and I like how it’s very simple and modern.” When it comes to signature scents, Kelly, who at the time of interview was preparing for Jakarta Fashion Week, opts for those reminiscent of the outdoors. “I love the sea and the smell of cleanliness. That’s why when it comes to my favourite scents, I gravitate towards the ocean,” she says.

For Shalvynne, the perfect combination of scents would be light and not too overpowering. “Fresh with a little hint of florals and musk, that’s my favourite kind of fragrance,” says the 27-year old Director of Serpong-based Cometal, a metal fabrication company. She tried Turbulences from the collection. “Their pieces are always classic, but not at all outdated. The brand is also very feminine and chic at the same time,” she says of Louis Vuitton. Shalvynne plans to open a Montessori pre-school next year, having recently gained early childhood education certification.

Olivia is naturally feminine and elegant, so when it comes to her signature scent she gravitates towards anything pure and sweet. “I think floral and fruity smells suit my personality the best,” says the 24-year-old fashion blogger. “I love their boots. They are very cool and easy to pair with mini dresses,” she adds. “I also like their classic monograms.” The Binus University graduate, who modelled Rose des Vents from the collection, is busy with her clothing label, Calla Atelier. “We are creating a ready-to-wear line, so please look forward to it!”

“Pure vanilla with hint of roses. I love how it reminds me of freshly baked cookies, and the light roses just add the right amount of sweetness,” says 27-year-old Stella Lowis of her favourite kind of scent. The co-founder and executive pastry chef of La Maison Patisserie says she feels a strong connection to Louis Vuitton. “Apart from their mind-blowing designs, they also make a big contribution to society, as seen from their latest campaign in collaboration with Unicef,” she explains. Stella, who modelled Contre Moi from the collection, aims to expand her bakery business, now established in Medan and Jakarta, to other parts of Indonesia.”

The 20-year-old actress, who has just finished shooting her latest movie, Ayat-Ayat Cinta 2, with Fedi Nuril, Dewi Sandra and Chelsea Islan, loves the earthy scent produced when rain falls on dry soil. “I like how it has a very soothing and calming effect on me,” she declares. Talking about Les Parfums, Tatjana has nothing but praise. “I like how each scent lingers,” she smiles. “When it comes to Louis Vuitton, a few words come to mind: classy, timeless, comfortable, luxurious, chic. I think these perfectly fit the essence of the collection.”

The 20-year-old songstress favours sweet yet strong fragrances, as these describe her personality the best. “In particular, I love the smell of green leaves and roses,” says Angel, who modelled Mille Heure. She grew up with Louis Vuitton, so it’s one of the luxury brands she loves the most. “Their pieces are classic and timeless. Many people say this all the time, but it’s very true,” says Angel. “The first bag I ever had was a Louis Vuitton, and I still have it.” She is working on her first album. “It’s going to be a mix of pop and soul song,” she tells us. “I’m currently finding inspirations and exploring many options for the album.”

For Millane, a perfume is something that makes a first impression, “A scent is something so personal,” she points out. “For me, it’s important to smell good and have your own character through it.” The 31-year-old singer, who
modelled Dans La Peau, considers Louis Vuitton as something she cannot live without. “Their pieces are iconic, with an extensive range of bags, clothes and now perfumes,” she says. “It’s something you would want for sure.” Millane is about to release her first Indonesian album. “This is my ‘baby’ right now,” she reveals. “I’m hands-on with everything, from the writing to melody arrangements and music video concepts. It’s very special for me.”