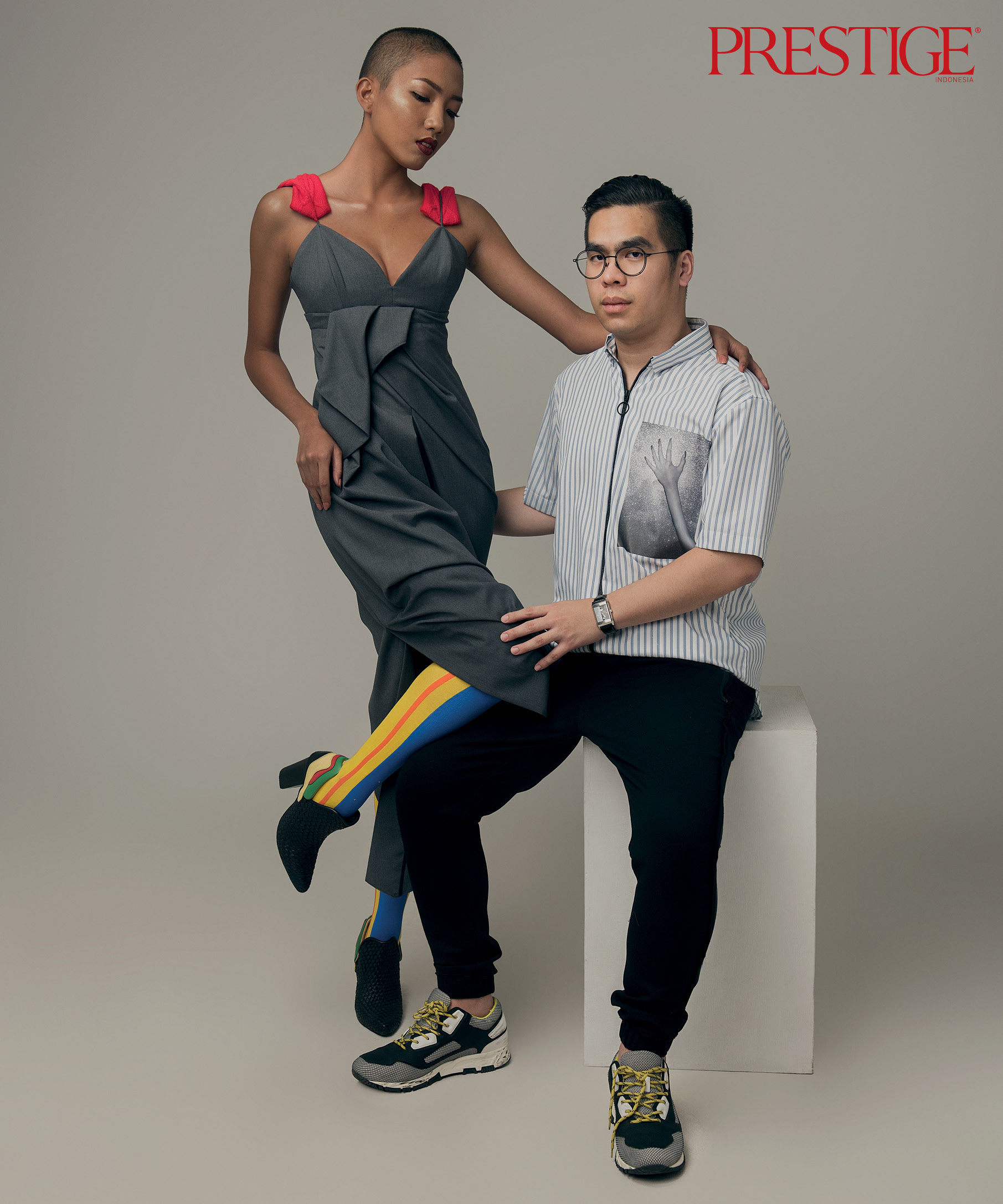 His mischievous fall/winter 2018 collection is just one more example of how Patrick Owen succeeds as a fashion designer. He refuses to play by the rules, writes Handayani Tanuwijaya.

There’s nothing at all conventional about Patrick Owen’s work. His fall/winter 2018 collection Re:mata, which showcased at Amazon Fashion Week in Tokyo, has only strengthened that notion. For example, his Raba Skirt features a printed photograph of a woman’s hand (taken by Argentinian photographer Leandro Quintero) on the crotch area.

“Get touched on the right spot” said the brand in its Instagram post. Raba means “touched” in Indonesia. The “provocative picture” is one of the highlights of Patrick Owen fall/winter 2018. It is not only on the skirt, but also on the chest area of the short-sleeved shirt that the designer wears for his Prestige photo shoot.

Patrick Owen Sakti Ongskynaga, the designer behind the brand, is no newcomer to Indonesia’s fashion industry. His ready-to-wear collection has been mesmerising fashion enthusiasts for the last five years, especially those who favours edgy and sporty charisma. The 28-year old designer even successfully attracted Disney Indonesia to collaborate with “Minnie Rock the Dots” last year.

It is in the late afternoon when Owen arrives at the studio. He comes with Hayati Azis, a young Indonesian model who is as edgy as his creations and also walked at his fashion show in Tokyo. “It was revolving around the spirit of freedom to create,” he starts, referring to Re:mata collection. ”I remember starting to collect colours for the collection initially. It was bizarre that I selected a very vibrant colour, which is very different from my previous collection.

“Later on, when I started to think about it, those colours reminded me of Lego pieces. I start to ponder why I used to like to like play Lego. Why was it still popular among children and adults? Then the brainstorming across to the freedom to create something that you like. The freedom to create without any instruction from anyone and that was very liberating. I recalled vividly how I used randomly stack on things. I don’t need any approval for such process and I enjoyed it.”

It is not the first time for Owen to have a showcase outside Indonesia. Previously, he had fashion shows in Hong Kong, Korea and Melbourne. But what makes Re:mata special is it is the first time for him using batik print. “I want to bring something about Indonesia as well, but I was petrified of touching on something that is sub-cultural, for instant batik. But, I really want to learn more about it and create something that is different from norms and traditions, yet influenced by it.

“So I decided to collaborate with Darbotz and we started just playing around with parang motif. We didn’t care about the rules, regulations or standards that batik ought to be. We were just having fun and I really love with the results. It wasn’t an act of rebellion. It was really to embrace the spirit of freedom to create and that was very liberating for me. It was free spirited giving to the process.”

“What’s exciting on fashion industry nowadays is a lot of fashion brands willing to collaborate with people outside of their discipline,” he says. “I think that’s very interesting for working with interior designer, product designer, beverage companies or hotels. It is really great and I’m not only talking about commercial value, but also it forces designer to look at things outside of fashion world. It opens new opportunities and horizon. It does affect our creativity process in the future which is really nice.”

Talking about fast fashion who is also offering ready-to-wear clothes, Owen doesn’t feel alarmed at all. “To be honest, if it design rightly and done in a cleaner way, I have nothing against it,” says Owen whose collection can be found on Masarishop.com. “I think there’s nothing wrong with fast fashion, other than the ways it made. Fast fashion would be answered for a lot of people and fast consumer. It is serving a lot of people in their life, yet also harming the environment.

“I don’t think it has any impact on Patrick Owen as a brand. We’re creating something that is very different and we’re embracing different things as well. Fast fashion is embracing on consumerism. I’m not saying Patrick Owen doesn’t care about profits, but it’s a lot more than that for us. It’s about how we would want to express the freedom of creativity, empower people and bring something new to the industry for people to enjoy and feel special.”

Patrick Owen’s signature design can be seen from its clients, who is a group of people with a big dose of confidence. “Age doesn’t really matter to us. What we seek is the personality,” he adds. On the other side, he really grateful that now Indonesians are starting to understand what ready-to-wear is. “A lot more willing to consume ready to wear from designers. Many organisations are a lot more supportive towards young emerging fashion designers as well.

That’s really great because like I said, the reason designers doing collaborative works is not just to create opportunities, but also broaden the horizon. At the same time bringing something new to the industry as well. I think it is very refreshing. But in the future, I hope that people also understand that fashion is not only about creativity. Most people talk about fashion only in creative terms.

The ability to balance between the two worlds seems to come from Owen’s education background. He doesn’t have fashion degree, instead a double degree in Law and Commerce from University of New South Wales, Australia. “Fashion hasn’t been in my dictionary since after the university year,” he explains. “I can’t say a lot of things of how I’ve encountered with it, but really it is an affinity. I am very passionate about it and that’s why I’m still in this industry after five years.

“It hasn’t been an all-smooth journey but I’m very fortunate to have a team that is so supportive. They have been helping me through the process and I think above all, finding that team was the biggest challenge in my career. If I don’t have them, I don’t think I would be where I am today and I don’t think I would be able to continue to progress. The other challenge would be differentiate yourself and to communicate your brand to audience. I won’t say competition in this industry because everybody doing different things.

“It is more about how you marketing and distinguished yourself from others. But really at the end of it, when I asked myself, six years down the road, it was affinity that brought me to fashion and it has been fun. I want to keep it that way. I’m not going to throw you with bombastic values. I believe that I just want to do things that I love and committed to it. Hopefully, it will bring some fruits to the industry.”