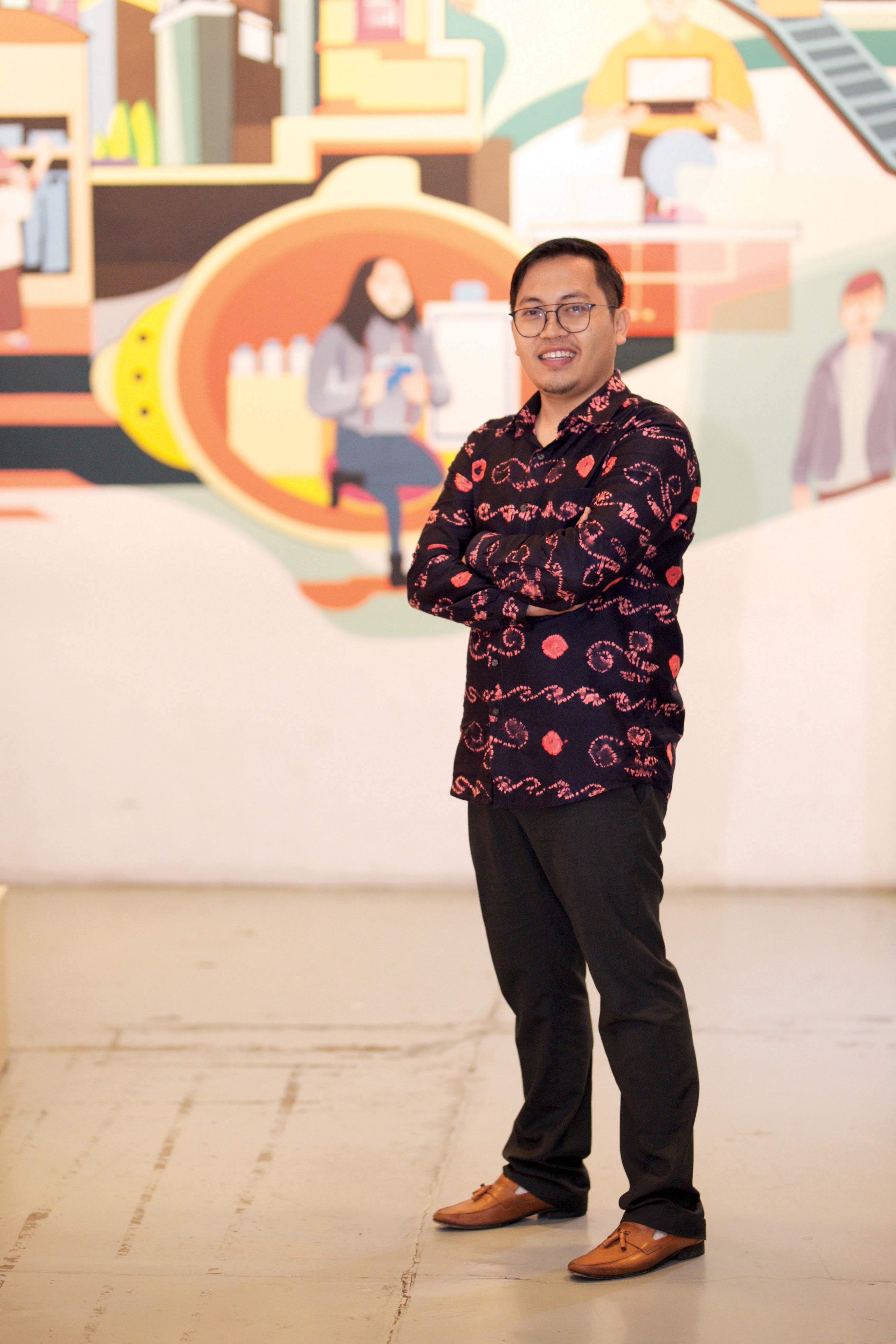 “We saw an opportunity to bridge the gap between Indonesian sellers and buyers. We now host 3 million SMEs on our platform,” says Achmad Zaky, founder of online marketplace and unicorn Bukalapak, in an interview with Liviani Putri

Achmad Zaky greets Prestige warmly at the Bukalapak HQ in Kemang. Fittingly for a company that has transformed the way millions of small-business owners do business in Indonesia, the office stands out with its colourful and modern design.

“The inspiration for the design comes from the market situation, where there are a lot of shops and stalls that people can hang out in,” explains the 31-year-old founder and CEO of Indonesia’s fourth and newest unicorn, a billion-dollar startup. Zaky, it turns out, has no office of his own. “Actually, my corner room is anywhere and everywhere,” he grins. “I love to sit with my employees.”

Telling us his story, Zaky begins at the beginning. “I was born in Sragen, Jawa Tengah. Practically, I was born and raised in a village. Ever since I was little, I had a passion for computers and science. I was thrilled when my uncle bought me a computer and brought home books on programming, like Basic and Fortran.

“I was pretty lucky at that time that even though I lived in a village, I had access to technology. In high school, I represented my school at the National Science Olympiad (OSN) and won at the national level (at the age of 16). It was then that I realised that computers and me were inseparable.

“My parents were teachers, so I didn’t have financial advantages back then. But my childhood shaped me to go into the technology industry. I followed my passion and became an Informatics Engineering major student at Bandung Institute of Technology (ITB).

“Since I had grown up studying computers, I was one step ahead among my classmates. I became active in clubs in college, and so I got to know people, socialised with them, and lived my passion. I was one of the initiators of the Entrepreneur Club, which became known as the Techno Entrepreneur Club (TEC ITB).

“I was also your typical curious college student and I entered a few national competitions. One of the most memorable of these was the 2007 Indosat Wireless Innovation Contest. I became a runner-up through developing a software that I named MobiSurveyor. It served to perform quick calculations for surveys.”

Also visit: Katherine Prasetio and the Online Business of Jewels

What gave Zaky the idea to create Bukalapak? “I was inspired when I saw the owners of many SMEs (small and medium-sized enterprises) in Sragen still not improving in terms of prosperity. I was worried about their welfare and I thought they needed to move up to the next level. For example, I knew a neighbour who had owned a small business since I was little, but her business was still small.

“I thought about how my college mate Nugroho Herucahyono (co-founder of Bukalapak) and I could use technology to make something to improve small businesses. We saw an opportunity that would not only bridge the gap between Indonesian sellers and buyers, but one that would advance the livelihoods of SMEs through technology.

“By the end of 2009, after many sacrifices and struggles, we pioneered a start-up that we now know as Bukalapak.com. The concept of Bukalapak is an online market for SMEs. Using it, they can gain access to the national market.” Why is it called Bukalapak? “Because lapak is the word for a market stall,” Zaky explains. “An SME owner can use the website to open (buka) his or her stall (lapak).

“Our mission is to aid Indonesia’s micro-economy, to help it become more independent and productive through innovations in technology. Our role is to be a safe and trusted e-commerce platform and we’re steadily expanding our services through new innovations.

“We are dedicated to empowering SMEs. In e-commerce eight years ago, not many people talked about them. But we are building a community. We now host almost 3 million SMEs on our platform. That’s what makes us different. Bukalapak isn’t just an e-commerce platform, but also an empowerment platform where people are not just selling things, they can also learn. For me, it’s one of the important components that other e-commerce platforms don’t have.

“Bukalapak had a unique beginning, I would say. Because I saw the SMEs owners gather round when I visited them in Yogyakarta and Semarang. It was then that I realised that Indonesians are a community-based people. We are social, we love to hang out.

“Our platform is the biggest for SMEs. Why? Because of the community we have created. It’s also an acquisition tool. Since 2010, we have held events in every major city. There’s an event every day – in Solo, Garut, Medan, Aceh. And at every event, there’s always 100 new SMEs who join Bukalapak. It’s a free acquisition tool and it’s organic. It has a strong word-of-mouth appeal. For me, it’s quite a unique business model. Ultimately, we want to SMEs to be the solid foundation of our economy.”

Zaky has had his struggles. “Back in 2010, we had zero SMEs who wanted to join with us,” he says. “No one was visiting Bukalapak. I just started with my friend Nugroho in my boarding house room. It was a small room and we did all the activities there: working, eating, sleeping. It was crazy. We both realised that we couldn’t forever be engineers. Because who was going to be the marketer?

Also visit: Wear the Sexiest One-Piece Swimsuit Like the Celebs

“I decided to visit the SMEs on the streets, in the markets, invited them personally to join Bukalapak. Many of them didn’t have cellphones in 2010. We struggled a lot. But among 100 SMEs that we approached, five of them already had a cellphone. We helped them to set up accounts, step by step. If they didn’t have email, we helped them to make an email account.

“We had to teach them slowly, step by step. But every day we got five more, and we did it consistently. And then it grew. And I was energised. It felt like having a baby. We felt like missionaries, spreading the good thing for the people.

“We provided numerous education and training opportunities through interactive events, but the sellers themselves are the ones who built the inner community. It’s been a great help for us to grow the digital SMEs. We are working earnestly to better their livelihood, it’s extremely motivating. Reaching success together is so much more rewarding than enjoying it alone!

“The investors came along a year after we established Bukalapak. And during the first year, we were standing in the middle between go and no go. We enjoy personal satisfaction when we bring a good impact to society. Bukalapak at that time was a weird business concept. There was no revenue. We helped people to sell, but we didn’t charge them for transactions. Because we had no revenue, the SMEs sometimes gave us money! It was fine, but it wasn’t enough. We even thought about shutting it down. We were stuck between making money and idealism.

“I would say we are pretty lucky. An investor from Japan came to our room. Our room was ugly, but he was impressed. We asked why and he said: “Because your company is run by two people, but you’re growing. Imagine if I gave you money, I bet your company will be bigger.’

“He offered pretty huge capital. Then we started to gain confidence because we believed there was a future for the business. Then there was a new trend in 2011. At that time, tech companies were receiving investment backing (Kaskus by Djarum, Detik by CT Group, Yahoo Indonesia by Koprol) and then we got investment. The internet then was pretty strong, gaining momentum. Then we decided to move forward because we could pay ourselves self properly. We could move to a bigger office, we could recruited more professionals.

“Every year we are approached by new investors, from the US, China, Singapore. We are happy that we can be trusted by many investors. Investors want to invest in businesses that have achieved much and hence show potential to be future global leaders. If you focus on your product, you can continue to develop and serve people better, and be grounded on a noble vision that employees, customers and investors can all relate to. Once you are set on those things, investors will be less hesitant to invest in you.”

What are the main challenges Bukalapak faces? “The major challenge when you start a company is no one believes in you,” says Zaky. “My analogy, being an entrepreneur is that it’s like being dumped in the middle of the forest. But we can’t be scared. We should be calm, convince ourselves that we can find a way. When I started Bukalapak I was a bit scared, but when I jumped into it I knew we could be stronger. But it’s not just about mentality, it’s about competition. It’s not about surviving, it’s about an attacking mentality, being more aggressive.”