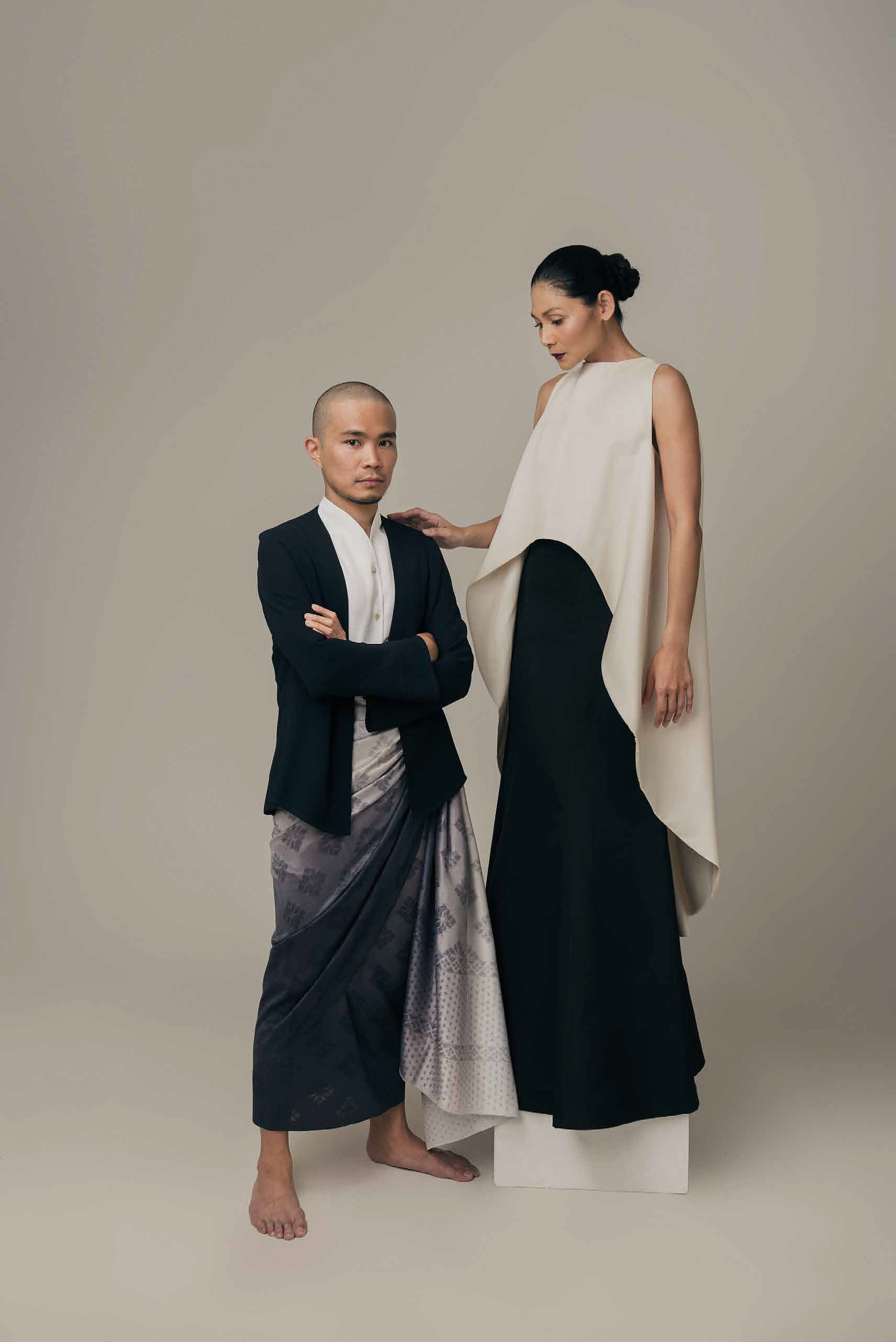 Auguste Soesastro, founder of the Kraton label, has adopted a new, bald look. Asked why he shaved his head, he answers: “To get rid of the bad luck.” Ajeng G. Anindita reports.

Auguste Soesastro has quite a background: art and architecture. The cool, composed and soft-spoken fashion designer studied Architecture at the University of Sydney. He also attended Australian National University, where he gained a degree in Film and Digital Arts.

“I wanted to be a fashion designer when I was 8 years old,” he tells us. “I think it’s something that has always been with me, around me and also my family. It seems like something that’s natural to me.”

Nevertheless, Soesastro worked at the National Gallery of Australia as a junior curator of Indonesian art, specialising in Southeastern Asian textiles and ethnographic arts, before, at the age of 24, going to Paris to study Fashion Design at the École de la Chambre Syndicale de la Couture Parisienne. He then relocated to New York to work as an assistant pattern maker for Ralph Rucci.

“I moved here at the beginning of 2011. I don’t really want to say I moved back, because I’d never really lived in Jakarta properly,” Soesastro says after a photo shoot involving his muse, the singer and actress Paquita Wijaya.

What does Soesastro love most about the fashion business? “I like problem solving and I like working in the atelier,” he replies. “I’m not so much into the parties and the fashion shows, the glamorous side of fashion. I think I’m more like a technician. I like working with cloth. I think that was what attracted me to fashion.”

So how does he define his design philosophy and aesthetic? “I have a philosophy, but I don’t think it becomes my design aesthetic. I’ve always approached everything from a functional point of view, that’s number one. And then, the fabric itself, it’s imperative in determining what it wants to do, because the fabric is a language itself and you have to respect the raw materials and work with it.” Having said that, he admits that he’s still working on his individual vision while also being answerable to commercial aims, “I think it’s still the current discussion I have with my staff and myself. What do I want to concentrate on? It’s going to take time to figure it out what it is. The company is 10 years now and I need to think of where I’m going to go.”

He continues, “I started Kraton in 2009 at New York Fashion Week, then I have another label, Kromo, which is sort of a slip. It’s a different ball game to create a ready-to-wear line as an extension of a high-end and international collection. I don’t have the basics to do the ready-to-wear and I need a partner as well to do that, so Kromo is still on pause. Kraton is still going, it’s my couture line with a small selection of ready-to-wear. Then there’s the most recent, Wastu.”

But the line is finally here. It has its own website and it can be found on online marketplaces like Bobobobo. Soesastro says that all of it is not without a challenge, “I have no experience in retail. Everything in Wastu is under a million, so it’s very affordable. You have to understand the distribution, production chain, fabric supplier, production managing has to have a merchandiser, it’s a huge team to run, but we need all that.”

Wastu means architecture in Sanskrit Javanese. All of his labels are in Javanese. He said it’s because his family very Javanese. “That’s sort of our living philosophy and I think it’s sort of important to take an aspect of your own life. So one can have meaning.”

What about traditional fabric? “We try to. The first two collections that I did in New York, we tried to use a lot of traditional fabric, but I realise that’s not the essence anymore. Now we are in Indonesia so that’s Indonesian enough for us. And there are sort of vocabularies of traditional wear that we can adapt to modern fashion, but that doesn’t have to be traditional or ethnic.”

Soesastro had his first collection in 2009, debuted at New York Fashion Week, looking back at his first collection, what does he think of it now? “My first collection? I think I was very assuming. We used a lot of very expensive fabrics that I wouldn’t use now, because they’re too costly. Well, it did ok, we have clients, but this was in New York, in 2009 and the economy was still OK.”

“I think I’ve changed from that time. I’m a bit more realistic now. Because now we have to deal with the business side of fashion. After 10 years, the business need to be sustainable, we need to think of the turnovers, that’s something I’ve never trained for. The fashion business is completely alien to me, I was always in the creative side of things.”

“Also for aspiring designers, I think you need to learn a lot. Everything seems instantaneous today, but I think people should not follow sensational stories because things might not be sustainable in the long run. You need to see how people have maintained their business for decades, how the older generation have stayed on. And technique is number one.”

Talking about the business of fashion, the trend right now is doing marketing with influencers, but Soesastro has a lot of opinion about it, “I think it is absolute BS. Why would you follow anyone’s style? I think it’s a sign of weakness, of not knowing who you are. They have pictures and pictures do very little for me, I need to read something. If somebody has an opinion about something I’d like to know. And if it’s not placed correctly, then I don’t really have much respect for their opinion.”

So does that mean he won’t be using influencer as a part of his marketing and public relation? “I don’t want to say no. When it comes to the business side, it might be a completely different issue. For some market, it might work.” He asserts, “Business and creativity are two things that don’t really match sometimes.”

Soesastro is known as an environmentalist and this does translate to his label as well, “We try to eliminate as much waste as possible, as we can. Even then we try to adapt our patterns so we use it to the maximum capacity. With the fabrics, we adjust things, we calculate each pattern adapted to different fabrics so that you don’t waste. I think it’s also very important to do it from start to end.”

He continues, “It is a mindset that I try to instill within my staff and to my work also. I mean, business is such an environmentally damaging industry, so we have to be very conscious about that. And even with Wastu, 60 to 70 percent of the fabrics we use are from factory leftovers. They have a lot, I must say, so I try to take advantage of that and that’s not easy as the fabrics are inconsistent. With Kraton we work with fabric mills that are certified, like Loro Piana. They’re very clear about where they come from and what it’s made. There’s no mystery. At the end of the day, how long we’ve lived in? I think it’s very important to make be very conscious of what we do to mother earth.”

When asked about his fashion heroes, he said his changes from time to time, “When you read a lot you started to get a lot of references. When it comes to construction, there’s this master, or the other one who’s a master of manipulating certain type fabrics and so on. You study what they’ve done, so I like to be specific.”

But then one name comes to mind. “Like Cristobal Balenciaga, which has nothing to do with the Balenciaga label today. He used to be the one that all the designers looked up to, because of his effortless way of using fabrics with a very complex construction,” says the 37-year-old, who enjoys painting and gardening in his free time.

Soesastro surprises us by saying that he weren’t doing fashion, he might be an opera singer. “I had serious training for 10 years. But opera is not something that you can just do on the side. It has to be full-time. As with fashion, you have to live it. You need to be in it 36 hours a day. You’re reading notes, playing the piano, study the verses and musicality. And I absolutely have no time for that.”

At the end of the interview, Soesastro looks to the future. “I shall still be working on the same thing. Kraton is taking up most of my time. For menswear, we’ve been trying to work on that for years. It’s not something that you can do with the same team. The design team can be the same, but the people executing it will be different because even though it’s unisex, the fundamentals of menswear are completely different from womenswear. And of course a separate atelier needs to work on it. You can’t mix them, really. Or maybe we can in the future – but then we’ll be redefining menswear.”