“What I discovered is that home cooking is completely different from street food. As a tourist, you probably only discover Indonesian street food. But actually, if you go to someone’s home, the quality and the richness of the food is amazing. For me, that’s my standard,” says Chris Salans of his first memory of finding good Indonesian cuisine.

For gourmets in Indonesia and overseas, this celebrated chef needs no lengthy introduction. Located in Ubud, Mozaic was Chef Salans’ brain child. Its enduring reputation and success are the result of his passion and hard work. Every dish at Mozaic is meant to showcase Indonesian produce and flavours. He marries Indonesian ingredients with modern French techniques in his dishes, “bringing the best that Indonesia has to offer to the world,” as he puts it.

This American-born culinary master grew up in France and did his training in some of the top restaurants in Paris. He’s a proud member of the Association des Maîtres Cuisiniers de France. He opened Mozaic in 2001 after he had been living in Bali for a couple of years. Chef Salans’ training and passion in gastronomy eventually encouraged him to open Mozaic. “After working for years in restaurants and hotels making satay and sandwiches – which is not my passion – I want to do what really love, which is fine dining, foraging ingredients,” he elaborates on his decision to establish his restaurant in Ubud. “And since I’m in Bali, I thought to myself that I needed to showcase all of this amazing food and produce. The concept makes sense to me and I decided to open it. Ubud, to me, is the heart of Bali, that’s why I opened my restaurant here.” 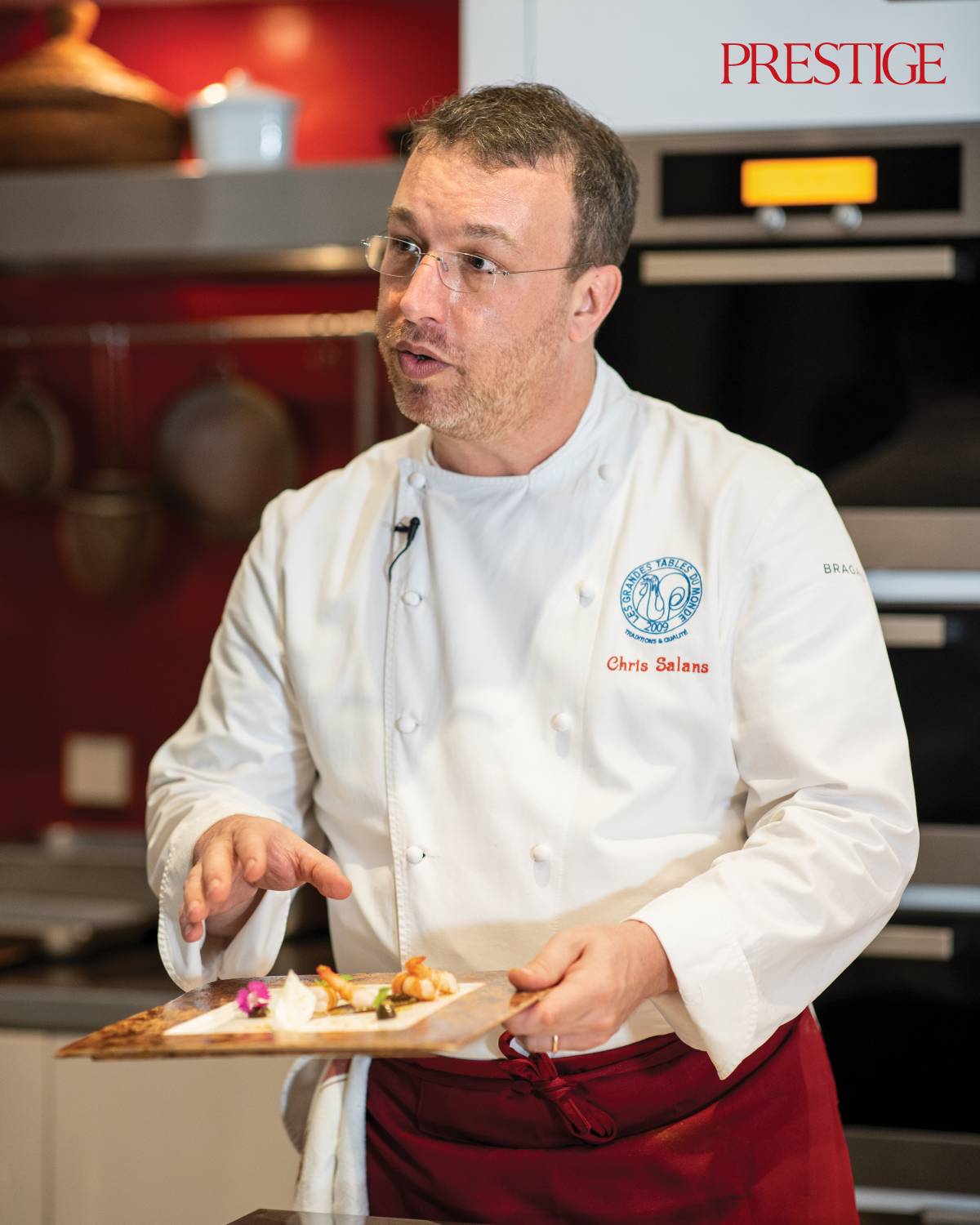 A decade, one cookbook and several TV appearances after opening Mozaic, Chef Salans launched Spice by Chris Salans in 2015. This restaurant has a similar concept to Mozaic, but it’s a tad more casual as a venue, offering a decidedly contemporary ambiance. You can go there for a quick bite or just to enjoy cocktails with friends. The food, of course, is marvellous. Nineteen years is a long time for a restaurant to survive in an ever-changing industry. So many new eateries come and go after trying different techniques and gimmicks. Mozaic has outlasted all of them. “We have been showcasing Indonesian produce and flavours for the last 19 years here,” Chef Salans remarks. “As time goes by, we are all looking for new things and therefore we have to get more creative. The ingredients we’re using will also change over time. They have to, because otherwise the menu will fall asleep.”

His story until now has been one of success. But what has been his proudest moments so far? “That’s a tough question, but there’s only one, really. Still being here after nineteen years, that’s memorable, right?” Chef Salans reminisces. “Still receiving awards, seeing the restaurants full. Hosting three Michelin starred chefs here, having the president of Indonesia eating here … I mean there’s so many. Oh, and having my eight-year old daughter come and say, ‘Daddy, I want your food’ is pretty high up there too. It’s endless, the pleasure you get.” About the changes he has seen take place in Bali, Chef Salans says: “What I have noticed in the last few years is that more and more Indonesians are becoming executive chefs or opening their own restaurants. That’s important. The culinary scene here had been mostly about westerners coming in and opening restaurants. That’s not really what should happen. There should be a balance. When tourists come here, restaurateurs and chefs should be showcasing Indonesian dishes and flavours. Diners want to have an Indonesian experience, not a French or an Italian one.”

One of Salans’ top projects at present is building Chefs Go Green, an association for chefs in Bali. The aim is to set up top-quality waste management systems in restaurant kitchens – “if possible, to have 90 percent proper recycling along with a ban on single-use plastics. So, we’re in the midst of putting the system together and registering the association. All of the members will implement the system, leading by example.” Something else he’s been working on recently – and striving to raise fund for – is a proposed chef school project for Bali. As you would expect of Chris Salans, he wants it to be nothing short of world-class, a state-of-the-art training centre for professionals on the island. As our interview came to a close, we asked him if he has any plans to open a restaurant in Jakarta. Chef Salans laughs: “I’m sorry, but it’s a bit too far. That’s not the only reason, but that’s the reason I can give you now. If I live in paradise, why would I move?”

Travel
Sign up to get the latest luxury and lifestyle news delivered to your inbox.
Chris Salans Mozaic
Ajeng G. Anindita

National Lipstick Day may have been last week, but

If you’re this close to mentally checking out, y

As a tribute to our nation's independence, we give

Prestige's August issue celebrates those among us