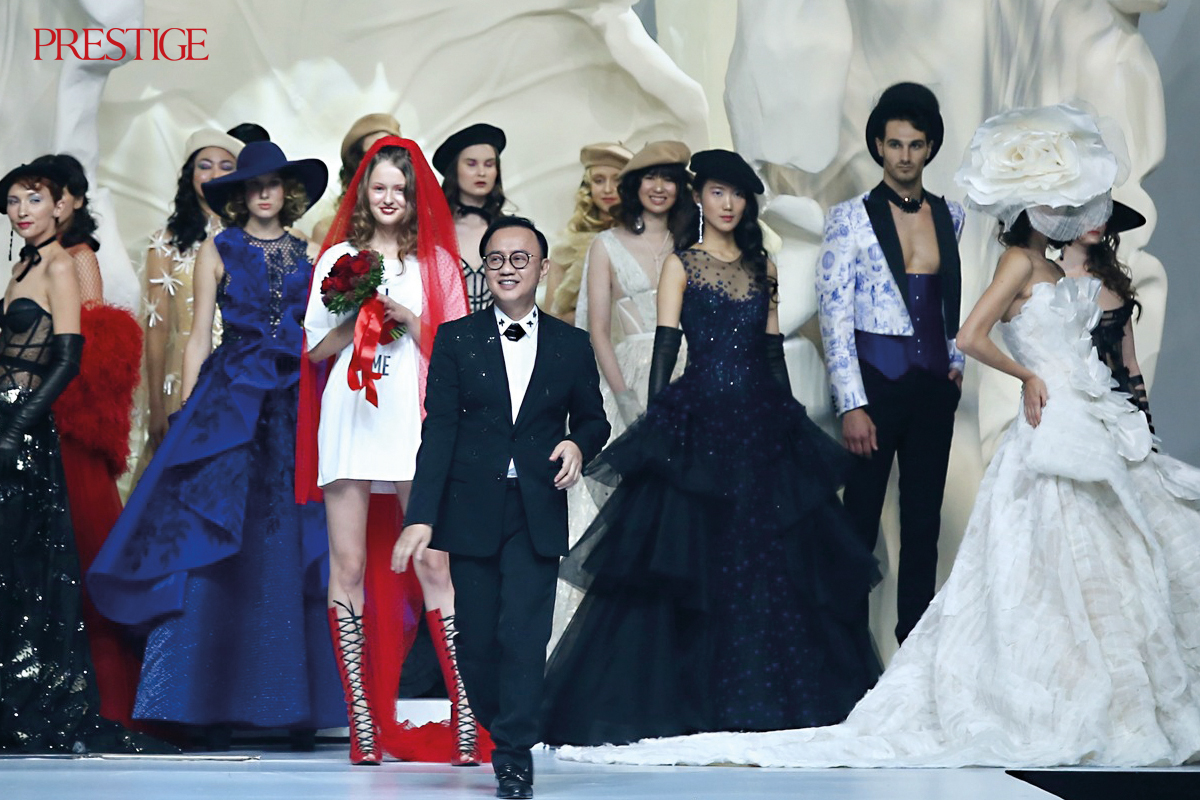 Becoming a couturier was not something Eddy Betty imagined himself doing as a child. But after design become a growing interest for him during his teenage years, all kinds of experiences and opportunities drew him nearer and nearer to the dazzling world of couture, like a moth to a flame.

“I’m an autodidact, I taught myself to draw,” Eddy says at the beginning of his interview at Eddy Betty Couture Studio in Kebayoran Baru, which he opened in 1996. The 47-year-old Jambi, Sumatra-born designer, who is of Chinese descent, is dressed simply and casually in a white shirt and tailored pants. Greeting us with a warm smile, he sits down in his living room. An album of his designs is placed next to him on a table.

Eddy recalls the early struggles, and pleasures of making his first sketches. “I was drawing all the time when I was young. It took me hours to finish just one sketch back then,” he says with a smile. “It was hard work, but that’s how my love for couture began.”

His elder brother, Syamsudin Lian, has played an important role in Eddy’s life. “After my father passed away, the responsibility of taking care of the family was inherited by the oldest child, which was my brother. Therefore, my brother was the one who supported my education through college.

“When I was small, he would take me along on his shopping trips in Jambi, choosing from among the latest fashions as they came in from Singapore. I was exposed frequently to these garments and I soon came to realise that my passion for design was growing stronger by the day. That was when I found my greatest interest in life.”

Around the age of 13, Eddy intensified his drawing activities. “I remember seeing [the late kebaya designer] Prajudi’s sketches in the newspaper,” says Eddy. “I learned how to sketch dresses based on his drawings. When my brother eventually asked me what university I wanted to attend after high school, I told him I wanted to go to fashion school.”

This was an unusual choice for someone from his background, to be sure. But Eddy’s brother let him enroll at Lembaga Pengajaran Tata Busana Susan Budihardjo. Eddy studied there for one year, during which he won a Sarinah magazine design competition. This success, not to mention his evident talent and passion for fashion, convinced his elder brother to back Eddy’s dreams of making a name for himself in the fashion industry. Next stop, Paris.

Living in the city of lights in the first half of the nineties, studying at Fleuri de la Porte and Chambre Syndicale de la Couture Parisienne, and interning with the likes of Ted Lapidus, Loris Azzaro and Christian Lacroix completely changed Eddy’s outlook on life. He was well prepared for it all. Before he flew to Paris, he took French language classes and continued to do so after arriving in France.

“I had to learn everything from scratch, from the most basic things,” he recalls. “For six years, I studied French culture. How they dress, how the seasons change, people’s interactions, traditions and creativities, right up to the social and political conditions there in the 1990s.

“It was amazing how they taught us, beginning with classic couture and later moving to more contemporary designs. I had a busy class schedule, but when I was out of college I spent most of my time taking in all the inspiration I could get from visiting the museums, fashion expos, art galleries or just taking strolls in the city. There is nothing more inspiring that being a fashion student in Paris, and having the freedom to express yourself.”

Eddy’s internships amounted to a different kind of learning. “Every day, I had new excitements,” he says of that period, from 1992 to 1995. “Maybe because I was just seeing the real world of couture and fashion design for myself, I understood a lot of things that I didn’t get from school.”

After spending six years in Paris, which he still regards as his second home, Eddy came back to Indonesia and began working on his next project, his studio. He decided to set up an exclusive made-to-order boutique to create exclusive kebayas and gowns.

“Back then in Indonesia, traditional dresses for weddings or parties were made with furing fabric, in only three colours: nude, white and black,” Eddy says with a smile. The couturier knew he had to shake things up, create some excitement.

“So I was inspired to introduce bustier designs,” he explains. “I was interested in the history of the bustier. You could say that it began as a form of ‘torture’. It was worn to please men. Their women could not breathe easily and therefore couldn’t run away from them! I was fascinated by the idea of turning something torturous into a beautiful thing.

“Nowadays, the bustier is used to correct a woman’s body structure, to make the body more proportional. The current trend is often to make it the main focus of the dress, rather than only being worn as an undergarment, simply to push the bust up and cinch the waist for a slimmer look.”

Eddy introduced his bustiers to Indonesian socialites, whose support of his concepts helped to make his work famous here. In 2000, he put on his first fashion show, “Ilustrasirkus”, during which he launched the unfinished hemlines and bustiers that would become his signature designs.

In 2011, Eddy made his first ready-to-wear collection, called Ed.Be. This became his second line. “I enjoyed the challenge of doing ready-to-wear and the creative process enriched me as a designer,” he says. “But couture remains my first love.”

A lot of young fashion designers have emerged here in the last few years, some of them creating dresses using bustiers. But Eddy says he doesn’t worry about such competition.

“There are a lot of millennial designers posting images on Instagram who have become popular for work that is similar to that of well-known designers,” he notes. “But to me, a great dress has a soul. It breathes and is sort of alive. When you put two dresses side by side, you can tell the difference between the gown that has soul and the one that doesn’t.”

Also visit: A smokey eye look that never fail as a stunner for your Valentine’s day!

Unlike many designers, Eddy does not feel the need to produce a new collection every year. This is mainly because he appreciates the “pausing moments” he needs. “After 21 years in the profession, I really enjoy my journey and appreciate each of my meetings with clients to design a custom-made bustier for their wedding or special moment.

“For me, it is all about designing high-quality creations that will last over time, rather than just designing for the sake of being on-trend,” he acknowledged. Not that he doesn’t pay attention to new trends. For instance, for his bustiers he has experimented with new fabrics, from scuba to voilette. We can run with the pack, but we can also pause and reflect. I don’t think you should feel bad when you take a pause in your life and use it as your new energy to move forward.”

Eddy’s latest show, “Liberté”, presented last September at Raffles Jakarta, was designed to show the public the first two decades of his couture journey, including his years in Paris. “It was all about what I have been feeling for the past 21 years. I felt liberated to have had my moment and to create all things I have ever wanted to create. The liberation of having my own time to grow, do lots of trial and error.

“Sometimes you waste some time and money, but that’s fashion. If you want to change your image or style, it takes time to get it right. But it’s really good for a designer’s development. At the finale, I try to say that we all have liberation to explore ourselves throughout time.” How does he define his feelings about fashion? Eddy replies simply: “Unconditional love.”