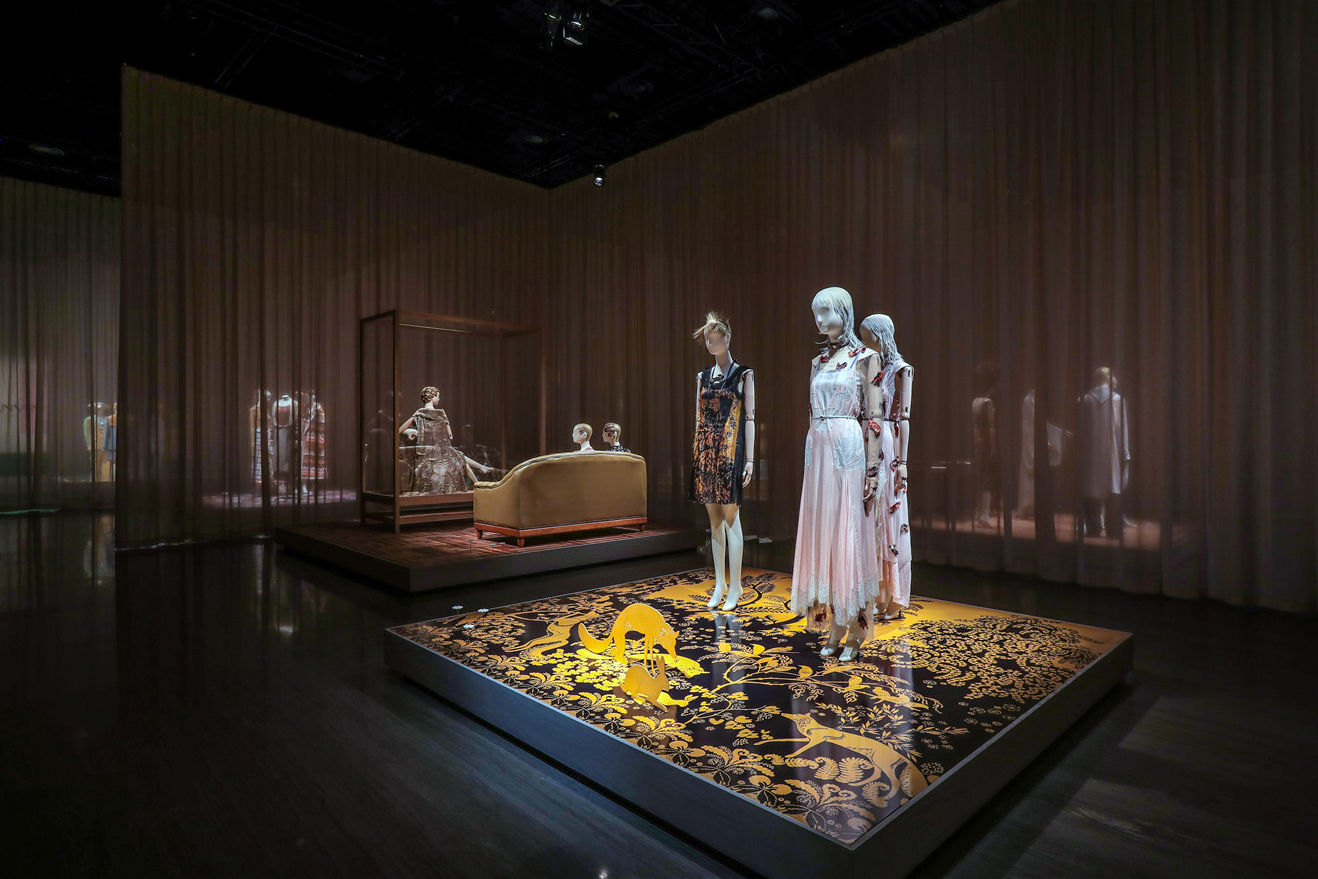 Iconic French fashion house Lanvin just opened an exhibition titled “Dialogues: 130 Years of Lanvin”, in partnership with the Fosun Foundation in Shanghai. It runs from 7 December 2019 to 9 February 2020.

The exhibition features over seventy antique clothing items, new runway showpieces, and precious works of embroidery, providing a sweeping view of this legendary brand’s profound influence on the fashion world over the past 130 years, and its reinterpretation under Lanvin’s new Creative Director, Bruno Sialelli. “I wish each and every one of you a fabulous journey of discovery through this exhibition, which I am convinced will move, entertain and fascinate you,” said Lanvin CEO Jean Philippe Hecquet

Lanvin was founded in 1889 by Jeanne Lanvin. As Paris’s oldest fashion brand still in activity today, Lanvin is renowned around the world for its timeless designs, pursuit of perfection in craft, and bold use of cuts and colors. It stands today as a global leader in high-end fashion. The Dialogues: 130 Years of Lanvin exhibition presents a refined and diverse collection of precious items never before exhibited in China from a diverse range of themes in a vivid retelling of the history of this storied brand that shows the evolution of Lanvin’s fashion innovations.

On the second floor of Fosun Foundation, Lanvin exhibits “Bow Ties and Brooches”, “Large and Small”, “Lanvin Theater”, “Plants and Animals”, “Evolution of Clothing Models”, “Exotic Travels” and “Waves”. It also exhibits “Discerning Paris”, “Video Room”, “Lanvin Light Room”, “Embroidery” and “Museum” on the third floor. The exhibition constructs a pathway through 130 years of history to present the evolution of Lanvin’s fashion across the dimensions of time and space, to pay tribute to the past, and gaze into the future.

In the dialogues across time and space between glorious history and modern heritage, between timeless classics and groundbreaking innovations, the viewer and brand join together to explore the deep artistic meaning and penetrating insights into the times that lie behind Lanvin fashion.

As it commemorates the 130th anniversary of Lanvin, this exhibition also welcomes new Creative Director Bruno Sialelli. Looking back over this legendary history, Lanvin’s landmark designs have infused the brand with extraordinary DNA, while the touching human stories behind each design have bestowed Lanvin with a unique culture.

This spiritual core is found within every aspect of the brand, transcending time and space to provide Lanvin’s designers with an inexhaustible wellspring of creative inspiration. Founder Jeanne Lanvin employed what are now iconic design elements such as bow ties, the mother and daughter brooch, children’s clothing and the childlike mind, medieval style, exotic flavor and the iconic “Lanvin blue” to form a signature style which has now found new life in the hands of Creative Director Bruno Sialelli. It shimmers with the luster of the times, and continues the splendor of the Lanvin brand in the dialogue between history and modern transmission.

Lanvin’s unparalleled and unrequited love for Marguerite provided her with the inspiration and the motivation that she needed to develop the House of Lanvin. In 1924, Lanvin adopted the famous logo, known as the Woman and Child – a tender motif that expresses Lanvin’s multifaceted relationship with Marguerite. Lanvin’s familial and precious ethos is captured in the image of a mother leaning forwards to clasp her daughter’s hands.

In 1908, Lanvin developed a children’s line in response to the demand generated by the clothing she made for her daughter, Marguerite Marie-Blanche. The following year she added a Young Ladies and Women’s department where mothers and daughters ordered their Lanvin creations together.

The “Angel” (L’ange) dress illustrates Jeanne Lanvin’s interest in the cultural production of Medieval and Renaissance Europe. The vivid ultramarine used to convey the angels’ robes was a costly and luxurious colour in 15th-century Florentine painting.

It was translated onto silk by the dye factories established by Lanvin in 1923. The formula for the dye was carefully safeguarded and “Lanvin Blue” continues to be central to the language of the House today.

Between 1921 and 1925, Jeanne Lanvin worked closely with the designer and draughtsman Armand-Albert Rateau. Their numerous collaborations gave Lanvin an “architectural framework for her style – a modernism that embraced ornament”.

For the dining room in Lanvin’s Paris residence at 16 rue Barbet-de-Jouy, Rateau designed an elaborate folding screen composed of ten panels. It brings together constellations of plants and flowers, sinuous tress, and animals composed of smooth, curving lines. The rabbit and fox chase continues from Rateau’s famous screen onto dresses in Bruno Sialelli’s collection for autumn/winter 2019.

Conceived as an immersive performance, and referenced in the second floor gallery, Bruno drew on surrealist references by reproducing the sleep-induced adventures of US cartoonist Winsor McCay’s comic strip, Little Nemo in Slumberland (1905-11), on accessories and clothing. This collection renewed the House’s legacy of daydreams as a perfect device to fetishise French elegance and experiment with craft techniques and imaginative silhouettes.

What is changing and what is eternal? Since its inception, Lanvin has aspired to lead world fashion trends, marshaling penetrating insight into the essence of ever-changing fashion, a pioneering modern spirit, outstanding design and bold innovation, Lanvin has constantly brought new developments to timeless classics.

Lanvin collaborates with a wide range of creators including visual artists, musicians, designers and writers, and draws inspiration from the cultures of the world. As they create new fashions, they also change the way fashion is presented, modeled and displayed.

“Each installation poses a question about what is changing and what is constant; the exquisite construction and attention to detail that persists at Lanvin is what delegates change to design.” – Curator and Exhibition Designer, Judith Clark

The relationship between Lanvin and theatre is one of the least renowned, yet fascinating aspects of the house. Jeanne Lanvin’ s contribution to stage costume was impressive, and spanned more than 35 years. She collaborated on 300-plus theatrical works that are counted in the archive.

In 1925, Jeanne Lanvin was appointed President of the fashion section at the Exposition Internationale des Arts Décoratifs et Industriels Modernes–a significant event in the history of fashion and design. Lanvin reprised the role of President of the Pavillon de l’Élégance for the Exposition Internationale des arts et techniques dans la vie moderne, held in Paris in 1937. Once again, the mannequins featured in the pavilion broke with tradition. The modern mannequin acts, therefore, as a conduit for the powerful role of imagination in our encounters with fashion.

Lanvin travelled the world in search of new experiences and sources of inspiration. Her visits to museums, churches, and antique shops led her to collect costumes and ancient, folk, and ethnic textiles that informed her fashion designs.

The references of the garments adorned in shells are to beautifully painted women’s dresses. The one on display, “Coquillage rose” (‘Pink Shell’), is from 1925, and it shows the translation across time and gender.

Dialogue Between Viewer and Brand

The exhibition also draws the viewer on a temporal thread along a 130 year journey of exploration. While revisiting many classic moments, a dialogue between viewer and brand unfolds across space. On the second floor of the Fosun Foundation, highly dramatic installations with clear themes form a dreamlike journey through time and space that inspires the viewer to seek out connections within the exhibition hall, and enter into a third space of intersecting light and shadow.

This third space brings together the most treasured objects and documents from the history of Paris fashion. To stand among them is to engage in an intimate dialogue with Lanvin through time and space. Here, the viewer can take an up-close look at Lanvin’s exquisite craftsmanship, and explore the evolution of Lanvin fashion while reflecting on fashion’s constantly-shifting essence.

“The essence of the 130-year-old brand Lanvin is about much more than just its classic clothing. It also rests in its passion for affection and family conveyed through its children’s clothing and furniture series. This is a perfect match with the healthy, happy and prosperous life Fosun Group strives to create.”
Fosun Foundation President, Jenny Jinyuan Wang

The Museum contains the most precious historic objects from the Lanvin Archive in Paris. They have been collected here for their first-ever display in China.

Jean Lanvin audaciously combined simple designs with rich embroidery. This aesthetic can be attributed to the couturier’s sense of style; to her ability to produce designs that appear simple but are powerful.

The conflation of dreamlike imagery and high craftsmanship is a distinctive trait of the House of Lanvin.

The Judgement of Paris

This pochoir print, The Judgement of Paris, uses the mythological tale of competing forms of desire represented by the three goddesses, as a humorous take on the competitive nature of society dress. Two of the three garments designed by Lanvin, and featured in George Lepape’s illustration, have been recovered and further restored for this exhibition.

The play of contrasts permeates the designs of Lanvin to the extent that it has become a signature of the House. Light and brilliance are frequent sources of inspiration for the House of Lanvin and occupy a central place in its universe.

Alongside the exhibition “Dialogue: 130 Years of Lanvin,” the LANVIN Café also makes its first appearance in China, recreating the atmosphere of the streetside French café to show Chinese viewers a slice of the romantic French living aesthetic. Lanvin Café is decorated with the trademark wood paneling, cloth canopies, mirrors and neon lighting of French cafés, not only presenting the pure French café culture, but also expressing Lanvin’s signature fashion aesthetic.

The site also features a Lanvin-themed desert cart and crepes made by CLOUD Bistro chefs, giving visitors a taste of authentic French flavor. Lanvin is joining hands with the Fosun Foundation Art Shop, drawing inspiration from Lanvin’s signature gift boxes and traditional Parisian book stalls to create a unique gift shop area presenting 17 souvenirs created expressly for this exhibition. Sit in LANVIN Café to enjoy the delicious food, or peruse the art souvenirs, and set out on a journey of “dialogue” across regions and cultures.

At this time, the CLOUD Bistro, located on the Fosun Foundation’s fourth floor terrace offering 270-degree views of the Bund, will officially open for business, providing Lanvin’s afternoon tea service and cocktails specially devised for the exhibition. Take in the fashionable allure and artistic import of Lanvin with a feast of the senses.