The opening soirée for the Floor Fairy Tales Vol.2 exhibition was held at Lobby Senopati, Ashta District 8, SCBD LOT 8, Jakarta, and was spread over three days, each with a different guest list to comply with restrictions on public activities. The first day saw interior designers and architects visit the exhibition; the second day featured a media tour for members of the press; and the third day was reserved for VIPs customers and vendors. The exhibition itself runs from November 5 until November 21, 2021, with Prestige Indonesia as the event’s official media partner. 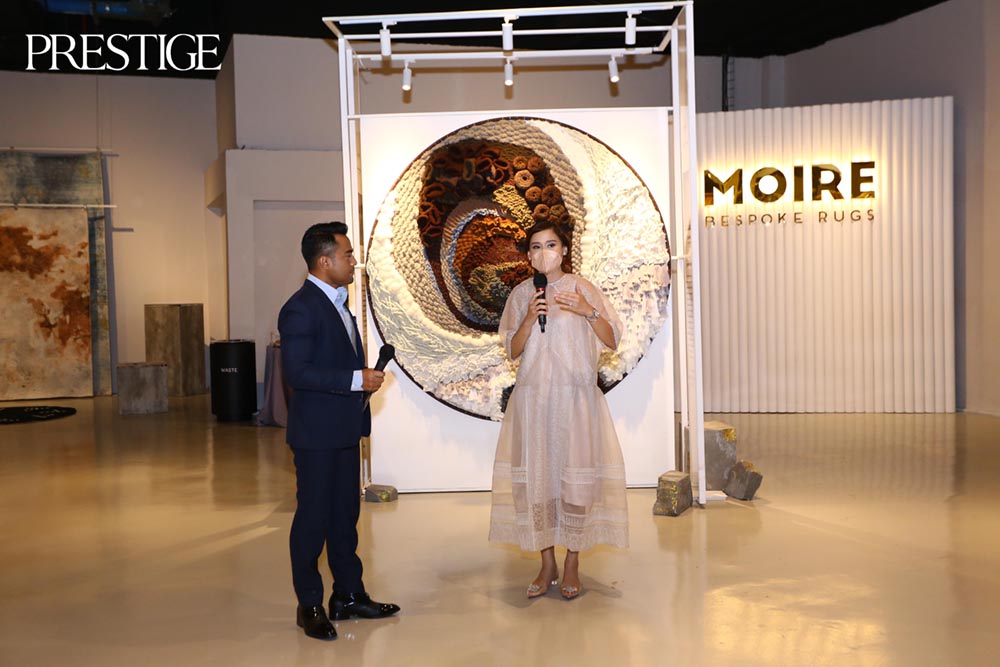 Five of the eight designers having their works exhibited were also present to introduce their respective works. These include Shirley Gouw, Sandy Karman, Severiano, Randy Halim, and Ong Ceng Kuang.

Shirley Gouw went with “simplicity” for the theme of her piece. Having worked as an interior designer all her life and having been exposed to various influences during her career, Shirley knew firsthand how homeowners would often look for simple yet versatile carpeting. For this reason, she created a rug with stripe patterns and intricate weave details that blended cool and warm tones together.

Meanwhile, Sandy Karman used a Baroque approach with a twist of geometric modernism to deliver something bold and daring. He implemented typography elements in his work and used the Futura Bold font as a tribute to his background as a graphic designer.

Moving on, we have Severiano who was inspired by the Japanese yin-yang concept in fish scale patterns. He used hand-tufted mixed with embossed techniques, and also applied carving gradation to bring out a dimensional effect for a livelier finish.

Randy Halim, meanwhile, created unexpected patterns and transferred them through careful threading and overlapping techniques. His inspirations range from the Neoclassical movement to clean Danish modernism.

And then there was Ong Cen Kuang, who created a special rug piece titled “BENIH” which emerges as a symbol of new hope and possibilities. For his work, Ong Cen Kuang wants homeowners to interpret his design through their own eyes.

While the artist himself wasn’t present at the venue, the work of Cyril Kongo drew quite a lot of attention through his signature spiral pattern. Besides utilizing black and vivid colors, Cyril also incorporated natural shades through graffiti letters.

Another highlight was Alexander Lamont’s collaborative piece, which was inspired by straw marquetry that is often made in his workshops. Alexander has crafted a piece incorporating small silvers of straw and textured lines. With glittering and reflective effects, his carpet offers warm, dream-like aesthetics, and high functionality.

Last but not least was Nelson Liaw’s collaborative piece, which is inspired by the colors of nature. Featuring a glorious display of a gorgeous blue color representing the sky and browns of the earth, this piece is a call to return to Mother Earth and to enjoy life.

Catch more glimpses of Moire’s Floor Fairy Tales Vol.2 in the video below: