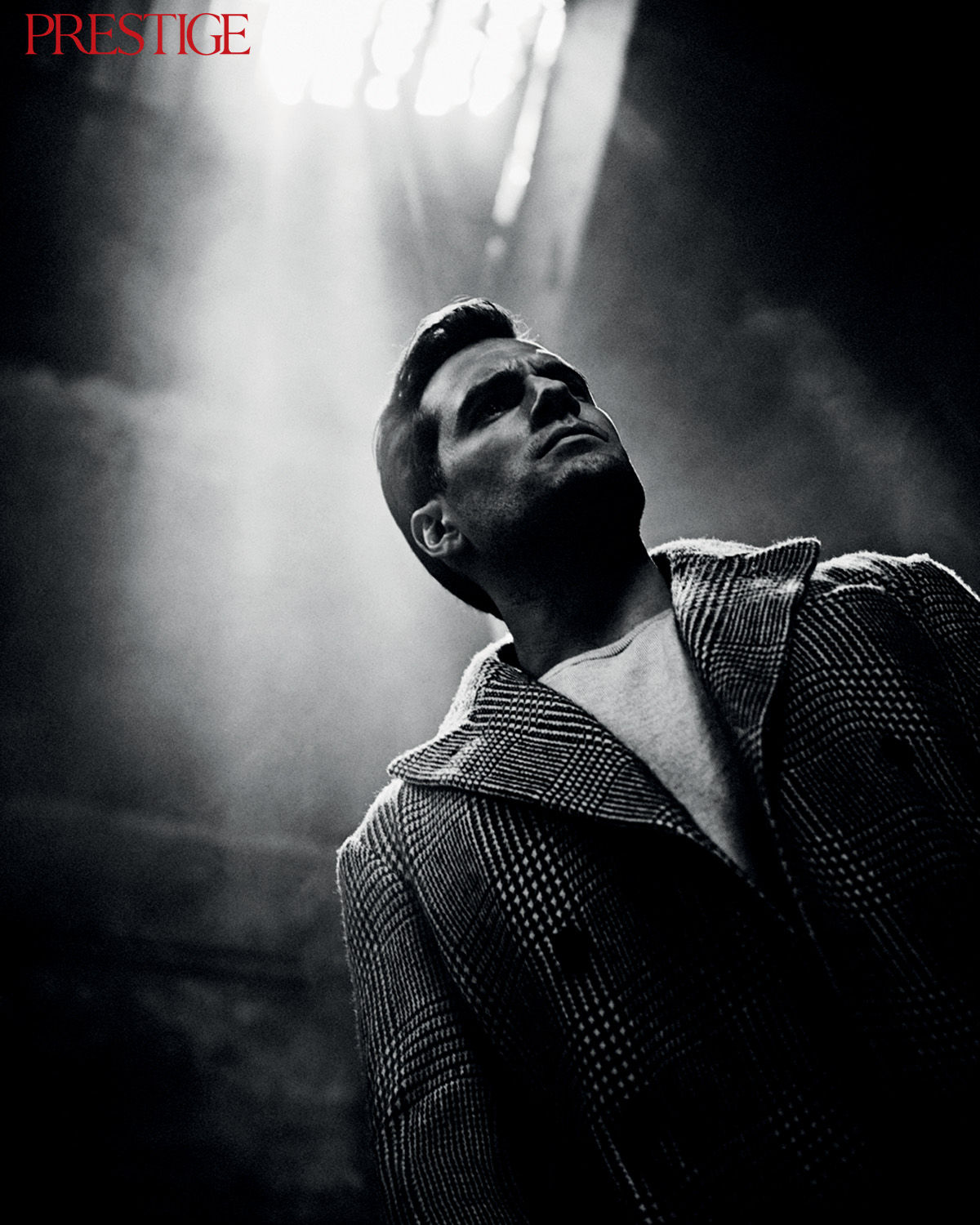 Henry Cavill is a gentleman. It’s in his actions, his diction, his dress sense and the fact that he’s unfailingly polite. When he arrives at our top-secret photo shoot location, he’s wearing a Royal Marines Charity hoodie, blue jeans and smart brown shoes – and, until now, I’ve never seen anyone look so dapper in jeans and a sweatshirt.

During the production, Cavill holds the door open for me to walk into the location, on two occasions. It’s the small gestures that add up. This 35-year-old British actor has accomplished a lot, but still remains humble and level-headed in what’s known to be a fickle industry.

Cavill tells me that during the next few weeks he’ll be focusing on gym work and following a balanced diet consisting of four meals a day with a specific ratio of macronutrients (protein, fats and carbohydrates), all under the supervision of his trainer, Dave Rienzi.

We’re going to have a discussion about where we want me to be in about four or five weeks,” says Cavill, “and the diet and the training routine will reflect that. He won’t try and crush me or destroy me or anything, that’s not the point. He’s just going to make sure that the body is going to shape and mould in the way that we think is aesthetically correct for advancing my career and also for my own sake – just so it’s healthy and what I think looks good too, because I also want to go to the beach and not be worried about taking my shirt off.”

Cavill has starred in a string of box office hits – you’ll doubtless remember his performance as Napoleon Solo in the action spy comedy The Man from U.N.C.L.E., not to mention him suiting up for the role of Clark Kent/Superman in three DC films. This summer, we’ll also catch him on the big screen in Mission: Impossible – Fallout, but we’ll get back to that.

Off-screen, Cavill’s schedule is hectic. Besides co-founding the film, TV and events company Promethean Productions with his brother Charlie and Ben Blankenship, Cavill is actively involved in charity work as an ambassador for both the Durrell Wildlife Conservation Trust and The Royal Marines Charity. Indeed, when we sit down, he and I briefly discuss the 13km race he’d just completed in this year’s Durrell Challenge. As for The Royal Marines Charity, a British-based organisation that provides support to serving marines, veterans and their families, he tells me that it’s up to him to “to kind of spread the word, raise awareness and organise some future events where we can raise some money and obviously donate that straight to the marines”.

Cavill was born in Jersey in the Channel Islands, where the beach was just a 15-minute walk from the family home. The second youngest of five boys, his career began when he bagged the role of Albert Mondego in a 2002 film adaptation of Alexandre Dumas’ The Count of Monte Cristo. Back then, he was just a lad at England’s Stowe School and it was uncertain whether he’d pursue a full-time acting career. By the time the movie had wrapped, Cavill had two agents, one in the UK and one in the US.

Straight off the bat, things started to happen. “I was picked up for [The Count of Monte Cristo] just before my last year of school and we started shooting over the summer holidays,” he says. “Of course, because we were shooting over the summer holidays, it went well into my first term in my last year. My parents and I just decided that because I now had a career, essentially we’d see how it went. If it didn’t work out, I was going to go back and finish my A levels and finish school. And if it did, well, it did – and it kind of worked out. Here I am today.”

Everyone has a favourite superhero; me, I’ve always had a soft spot for Superman, perhaps because it’s so easy to relate to Clark Kent’s personality traits. Cavill – or Superman, as he’s often referred to by his fans – starred as the most famous comic-book character in not one but three blockbuster films: Man of Steel, Batman v Superman: Dawn of Justice and Justice League (the first two are the highest grossing Superman films of all time). As it turns out, “Supes,” as he affectionately calls him, was also the young Cavill’s favourite superhero.

“Everything he represents is about positivity, forward movement, growth and helping people. and he’s also the most powerful of all the superheroes. And so, with all that power all he’s doing is actually just trying to help people,” he says.

“All of his self-doubt, reflection and worries – he protects the rest of the world from them because he realises that if a being as powerful as he is is nervous or worried or insecure about something, how is everyone else going to feel? So he guards those secrets very closely, because it matters to him that those he loves, the planet and those who live on it, feel comfortable that he’s around.”

Subscribe to the latest issue of Prestige Indonesia, and get the Prada sunnies from Optik Seis (worth IDR 4.320.000)

“Superman, in particular,” he continues, “has been a fantastic role for me to play. I’m a huge fan of the comic-book character and I’m a huge fan of how he’s represented in the comic books. It’s been a pleasure for me to be able to represent that in public as much as possible. It was a true honour to be able to play that character and I don’t use the word honour lightly. It was genuinely an honour.”

When he’s not in front of the camera at various photo shoots or filming in exotic locations around the world, this down-to-earth celebrity likes to spend his time reading, playing PC games, catching some sun and bonding with his gorgeous dog, Kal, who’s regularly featured on his Instagram account. Currently, Cavill has 5.6 million followers on the social-media platform but by the time this interview comes out, it’s probably even more.

“I enjoy sharing aspects of my personality with the public. I was very nervous about it at first,” he admits. “It took me a long time to get on to social media despite lots of pushing from my agents and my manager. Eventually, I did it and I’m enjoying it now. I’ve found my own voice,” he explains – and judging from his posts and videos, it’s quite a humorous one.

“I think there’s often a lot of pressure to do a certain thing and I was quite firm in the fact that no, I’m not going to just do the thing that everyone else does. This is a window to who I am and that was something that my manager always said, that social media is a window into your life and you can show as much as you want. So I took that on board.

“It was great advice because there are parts of my character that fans and people who follow me don’t know, so it’s nice to be able to show that aspect of myself. Everyone knows I’m a dog-lover now – if it wasn’t for social media, no one would know, and everyone knows that I have a very close connection with my dog in particular.

“You have to be careful,” he adds. “You never know if you’re going to offend someone, so you try and keep the stuff that’s potentially offensive to someone out. I’m not saying that I’m running around being offensive, but I am saying that if I spoke completely freely to 5 million people, there’s going to be some who are going to get offended, somewhere. So it’s a matter of just keeping other people’s feelings in mind.” (As I write this, Cavill announces on social media that he’s the latest global ambassador for Boss Eyewear, so if you haven’t done so already, check out the 2018 campaign images of the man himself sporting a range of optical frames and sunglasses.)

I ask if he’s into fashion. “I do like wearing nice stuff,” he says. “It can be tough to find stuff that fits me because I’m not a typical off-the-peg shape, but I do very much enjoy going shopping and finding really good gear.”

So, what’s next? Watch this space. In the meantime, you can see him as August Walker in the action-packed Mission: Impossible – Fallout with Tom Cruise, the sixth instalment in the series. The trailer shows Cavill and Cruise performing extremely complicated fight sequences that include a men’s-room brawl and an array of wild stunts in helicopters, on motorbikes and hanging off cliffs.

“As far as the agency goes,” says Cavill of his CIA-agent character, “he’s their number-one assassin. He’s the guy who if you want a target destroyed, he will 100 percent destroy it. He may destroy a lot of other things in the process, which is not ideal for collateral damage, but you know the target is going down and that’s his mindset.