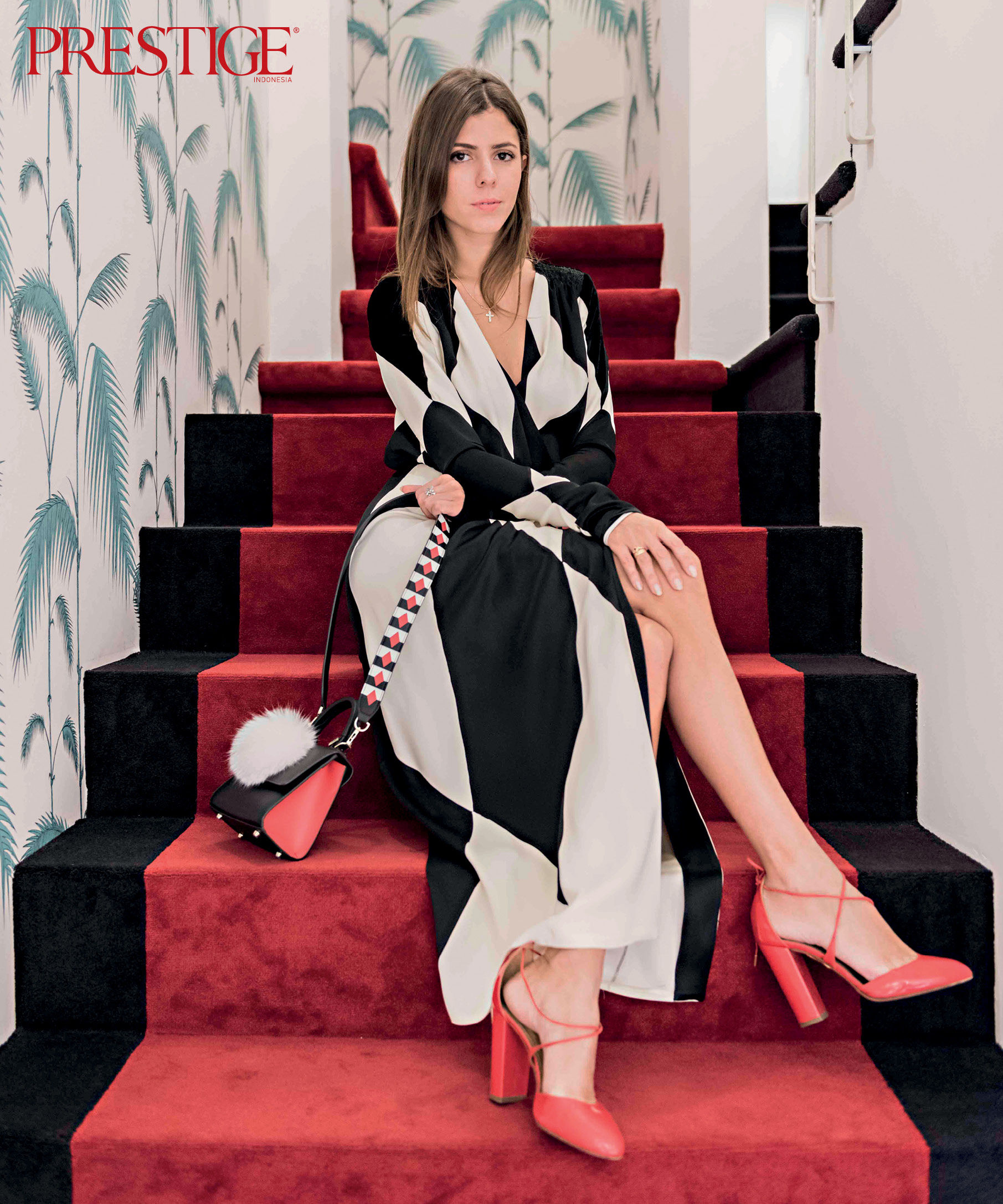 “I put my energy into designing handbags that can simply speak for themselves,” declares Maria Sole Cecchi, founder of Les Petits Joueurs, in an interview with Ajeng G. Anindita.

The woman responsible for all these uniquely creative ideas, Maria Sole Cecchi, is no stranger to taking risks. She describes herself as “a designer born by chance”, as she chose to drop out of her law studies at university in Italy and move to Paris to pursue her dream.

A firm believer that imagination is more important than knowledge, one night she was playing around with some Lego bricks. She spelled out the word “Love” on an old handbag and took it along for a night out in Paris. The eye-catching bag was a huge hit. Her friends all loved it.

Maria started designing for her peers before securing a partnership with a professional Florence-based accessories manufacturer. She teamed up with her brother, and now business partner, Andrea Cecchi, to launch Les Petits Joueurs’ first seasonal collection in 2014.

Taking first place in a Vogue Talent competition for emerging designers helped “explode” the brand, Maria says. Today, the label is available in 145 countries, including the Masari stores in Jakarta. In September 2016, the first Les Petits Joueurs boutique opened on Via de’ Tornabuoni, Florence’s luxury shopping street. Then in 2017, after a much growing level of demand, the brand expanded into men’s accessories and began creating unisex backpacks and large envelope clutches.

Maria has been named by The Business of Fashion, a digital authority on the global fashion industry, as one of the 500 most influential people in the fashion industry. “In less than two years, Maria Sole Cecchi’s accessories label Les Petits Joueurs has gained a level of street-style stardom to rival the designer herself,” said BoF.

Says Maria: “It was an incredible honour to be selected (in 2016) and to stand among so many great names in our industry. My reaction when I discovered I was on the list was a mix of two feelings: real happiness to see all my whole-hearted hard work being recognised, but also a reminder to keep pushing myself as a designer to maintain such title. I was named by them again last year!”

Born (in 1987) and bred in Florence, the designer chose a French name for her label. Why? “When I first came up with the idea behind my first handbag, I was living in Paris, so I decided to pick a French name,” Maria explains. “I chose Les Petits Joueurs because it is ironic to the actual persona of the brand. It means ‘little player’, which is a French way of describing someone who doesn’t take risks. Clearly, I aim to be the exact opposite!

“I think a Les Petits Joueurs woman is someone who is confident enough in herself to wear a bag that will make a statement and turn heads in her direction. She is not afraid to venture out in her own style. She is someone who’s elegant but also daring.”

A favourite among fashionistas, the Love bag is one of the most sought after bags from her label. When asked about her inspiration for the bag, she replies: “Love is a word that’s truly universal. When I look for inspiration, I tend to take a lot of it from my travels because the world’s cultures have so many different elements and details to work with. Then again, love is a concept at the base of the world’s cultures and has become the base of my brand as well.” Said the Italian designer who also has an obsession for shoes.

The brand gained its popularity from street style photography and bloggers who took their picture with the bag from Instagram. It was an instant hit for the brand. Talking about how important social media to her and the brand, she declares: “The Les Petits Joueurs Instagram account was vital for me in growing our sales and brand awareness. It’s at the core of our marketing strategy. It was very important to me personally because

I used to also use it as a personal account. I think this helped pave a way for me to be more personal with my fans and followers. However, owing to the size of the brand now, I have decided to make the original account purely for the brand. I have started a separate account for my personal posts.”

How does Maria keep up with today’s fast- fashion industry trends and the extreme pressures these can exert on designers? “I put my energy into designing handbags that can simply speak for themselves,” she replies. “Not only through special designs, but also through the unique materials and craftsmanship techniques I use. I think the most important point is to become the trend maker. Once I have that idea and the design, digitalisation spreads it like wild fire.

“I work hard on using technology as a medium to communicate my ideas because, like fashion trends, communication methods also go in and out of style. Falling behind on these points can easily push you out of the market.

“I look up to all those new designers who are making their way into the market with unique products and who are able to keep reinventing themselves season by season. Being creative and innovative in hectic seasons and short timing is something to admire and is something I can relate to as well.”

Maria describes her style as “a mix of new and old”. She loves to purchase “cool vintage items” and mix them with some cutting-edge accessories, much like her own bags. For her, the perfect bag exists. “It’s something that you carry all day and all night. For me, it is without question that it should be both beautiful and functional. I always want my bag to be super cool and chic, but if it’s not comfortable to use all day, what is the point? Les Petits Joueurs offers different sizes to cater to the needs of modern women, whether it’s mini or small for the more simple type or medium size for someone who needs to carry her essentials in it from day to night.”

The 31-year-old designer enjoys travelling overseas. She often takes inspiration from her travels. In fact, her last visit to Southeast Asia in 2016 inspired the brand’s collection for the following year. “It was an amazing experience to visit so many beautiful cities there, which included Jakarta, Bali and Hong Kong,” Maria says.

“I went to Indonesia to visit our lovely friends at Masari. It was such a heartwarming experience to meet so many fans of the brand! My fall/winter 2016-17 collection was completely inspired by Southeast Asian glam and patterns, fusing elements from the culture and the wonderful wild life that inhabits the region.”

So what’s next for Maria and Les Petits Joueurs? “We have a massive project that will be launched in September during Paris Fashion Week called Night Fever Capsule,” she says. “It’s a capsule collection that I co-designed with four other global influencers. Each of us is creating our own version of a total evening look using ready-to-wear clothes and handbags. The collection will hit retail stores in November. This is particularly exciting for us because it’s our first time producing clothes!”