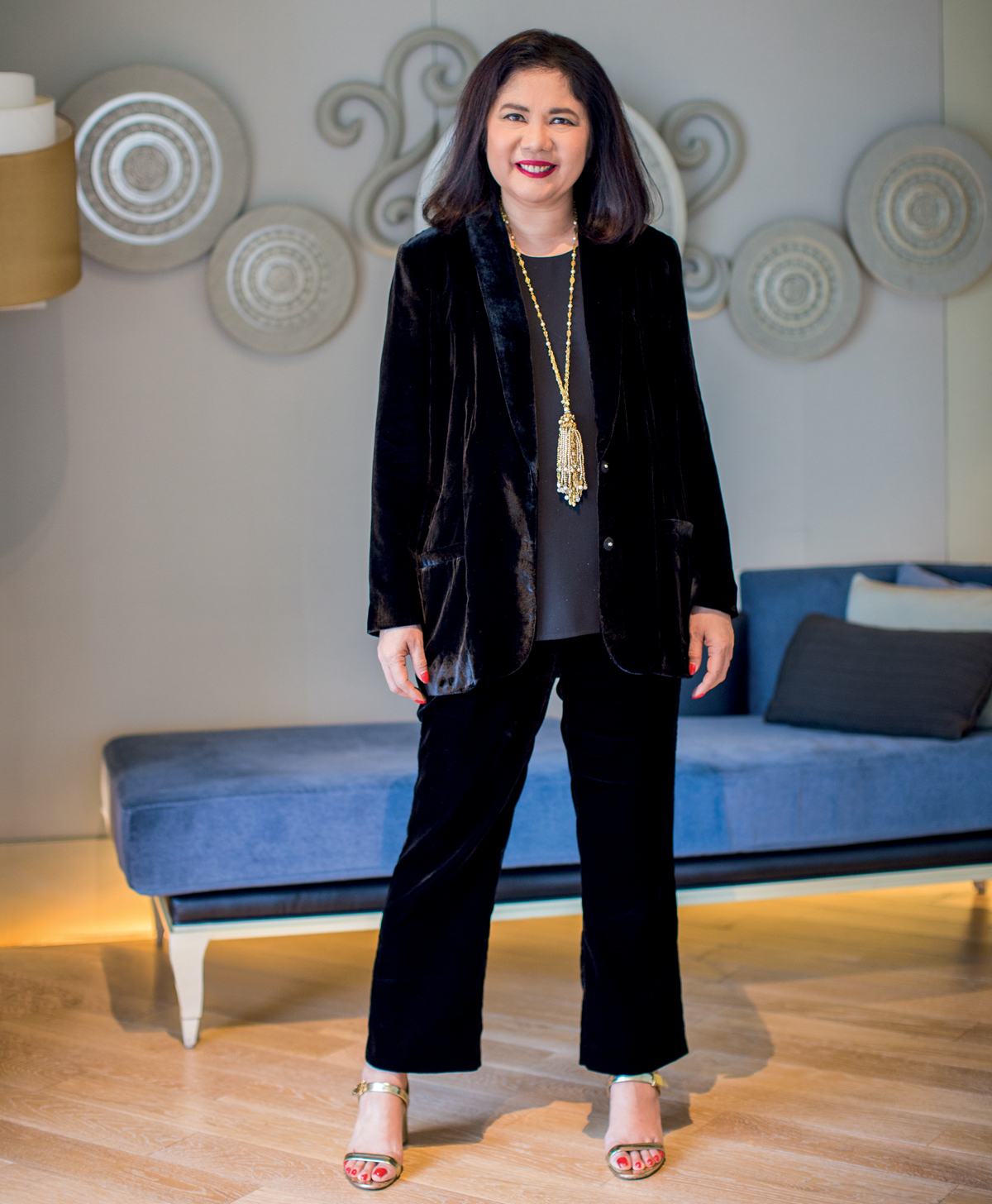 MIA EGRON: SURVIVAL OF THE FINEST

Mia Egron is ready for tonight’s Jakarta Digital Fashion Week event at La Moda in Plaza Indonesia. She’s in a black velvet suit, complete with a pair of gold sandals and vintage necklace  – looking as sophisticated and elegant as ever. “I’m going to support my friend’s daughter. She’s one of the designers tonight,” she explains. Before she heads off to the party, Prestige catches up with Mia at Keraton at The Plaza to discuss the future of shopping malls in the digital era.

Manila-born Mia speaks five languages and gained a Master’s degree at Fordham, a prestigious Jesuit university in New York City, in 1985. It was in the Big Apple that she started her business career, as a partner in an advertising agency. She went on to found a PR company and a telemarketing operation. Mia married the distinguished banker Patrice Egron in 1989. Five years later, she moved to Jakarta owing to her husband’s work.

“Mr Gozali invited me to join Plaza Indonesia in 1997,” Mia recalls. “I love fashion and I’ve always been fascinated by the retail industry, so I immediately accepted. Twenty years later, I am still here.”

Plaza Indonesia opened in 1990 and Grand Hyatt Jakarta in 1991. In 2009, the developer made significant changes, adding an impressive new wing to the retail complex, as well as opening The Plaza office tower, Keraton at The Plaza, a Luxury Collection hotel, and the ultra-exclusive Keraton Private Residence.

Visit this one: Irwan Danny Mussry: In Transformation Mode

In 2018, says Mia, the emphasis will be on youth. “This year, Plaza Indonesia is revamping its youth areas, which are on the upper floors of the new wing, to cater the younger consumer market,” she says. “We are also going to bring in new brands and interesting F&B outlets in the next two years. There will be some big new retailers and fresh, exciting concepts for shoppers to enjoy. There will be about 40 new brands coming in this year. We are also improving connectivity between the older part of the mall and the new wing.”

In an era when shopping malls and offline retailers are under pressure from digital competition and there seems to be an app for everything, how confident is Plaza Indonesia Realty about its future? Mia has no doubts.

“I believe in what Darwin said: ‘It is not the strongest species that survives, nor the most intelligent. It’s the one that it is most adaptable to change that survives.’ After 28 years, we are still standing strong because we have constantly changed. We have evolved with the times, reinventing Plaza Indonesia over and over again.

“I always say that we are forever a ‘work in progress’. We bring in at least 30 new concepts each year. We constantly improve our facilities. We organise new and unique events and promotion activities, and we continuously strive to upgrade our services. Along with change, we keep injecting new spirit and energy into Plaza Indonesia, to ensure that we always remain very relevant to our target market.”

Adapt and never stay the same seem to be the watchwords for Plaza Indonesia to stay relevant. It’s the story of the fittest – and the finest – shopping centre in the archipelago. Mia and her colleagues realised years ago that, as management consultant McKinsey & Company put it in a recent report, “malls are no longer primarily about shopping. People go to the malls for experiences that go well beyond traditional shopping. The e-commerce revolution and the rise of digital technologies are reshaping consumer expectations and shifting the function of stores toward useful and entertaining customer experiences.”

Plaza Indonesia not only offers high-end brands and stores, but also a lot of interesting events, such as Jakarta Digital Fashion Week, that pull in customers. The mall has been doing this for a decade or more. It created the prestigious annual fashion event, Plaza Indonesia Fashion Week (PIFW), in 2007. It also has the only men’s fashion week in Indonesia, Plaza Indonesia Men’s Fashion Week (PIFMW). “We invited international fashion blogger Bryan Boy (an America’s Next Top Model judge at that time) to our PIFMW 2014. That was even before the social media influencers became so famous,” says the mother of 24-year-old Celine Egron.

Last year, to celebrate its 27th anniversary, Plaza Indonesia put a 360-degree camera on levels 1 and 4 and held a photo competition for customers. In June, it brought the famed Japanese TeamLab Future Park exhibition to Indonesia. The show, which combined art and technology, had already been to London, Texas, Dubai and Singapore. To celebrate Indonesia’s 72th Independence Day in August, the mall held a fine art exhibition “Menjadi Indonesia” curated by Suwarno Wisetrotomo and  featuring 45 artists, including Djoko Pekik, Heri Dono and Putu Sutawijaya.

“We have set up a dedicated Digital Marketing team that works separately from the traditional Marketing Communications team,” says Mia. “The digital team comprises young millennials who are e-marketing savvy and will help the mall maintain its brand while reaching a younger crowd.

“We use social media platforms to promote our tenants, events and brands. We are on YouTube and we live-stream major events, such as the fashion weeks. We have a proactive millennials club, which consists of 50 people, in our commercial team. They meet frequently to brainstorm and execute new ideas to reach and engage the younger market. We also have an IT lab that is responsible for designing new apps and platforms, a few of which we hope to launch very soon.”

How about the challenge of e-commerce? “E-commerce is not a threat for us,” Mia says. “First of all, although the e-commerce numbers are growing, the penetration is still only at 10 percent, which is still behind most Western countries. Secondly, e-commerce in the luxury segment in Indonesia is not yet developed. People still value the in-store shopping experience, being able to touch, compare and try the products in-store and to interact with sales service teams. Product returns and reimbursements, which are a norm in e-commerce, are not easy to execute in luxury retailing, at least for now.

“I strongly believe that despite the growing popularity of e-commerce and the advent of the internet of things (IOT), brick-and-mortar stores will never be extinct because, by nature, people need human interaction. They need an attentive and personalised service, a beautiful store or mall ambiance, the positive activation of our five senses and the fun we derive from shopping with friends will always remain relevant. These things uplift our days and enrich our lives.

“But we are not complacent. Embracing change is our motto, so we are addressing the situation with a dual strategy, which means constantly improving the shopping experience with our tenant mix offerings, fun events and entertainment, and our service quality to better engage our customers. Also, we aggressively utilise digital marketing channels and create new platforms in order to promote our tenants and engage e-savvy consumers. The biggest challenge for now is actually convincing our tenants to actively participate in our digital campaigns.”

Mia believes luxury retail in Indonesia will continue to thrive in the next five years. Luxury goods consumers will value quality and customer experience more than ever. “Brand loyalty will not be as important as before, but unique pieces and high-quality products will be prime,” she says. “The retail landscape will become more customer-centric. As the sophisticated, well-travelled consumer continually evolves, the store experience will become even more important. Customer data analytics will be at the centre of decision-making and even more innovation will become essential.

“Yes, we will embrace e-commerce as a complementary platform to brick-and-mortar stores. But as I have said, in-store retailing will not fade away because people need human interaction and physical experience. As such, luxury retailing will become even more experiential and stores will utilise technology to enrich the customer experience. As one example, we already see this in the Apple Store concept. IOT will become a bigger part of the retail landscape, as well as artificial intelligence. I’m sure the next five years will be exciting, and a great learning curve.”

Style
By Lisa Gries
Sign up to get the latest luxury and lifestyle news delivered to your inbox.
Handayani Tanuwijaya