Pahala Nugraha Mansury: Creates a Great Connection as the CEO of Garuda Indonesia 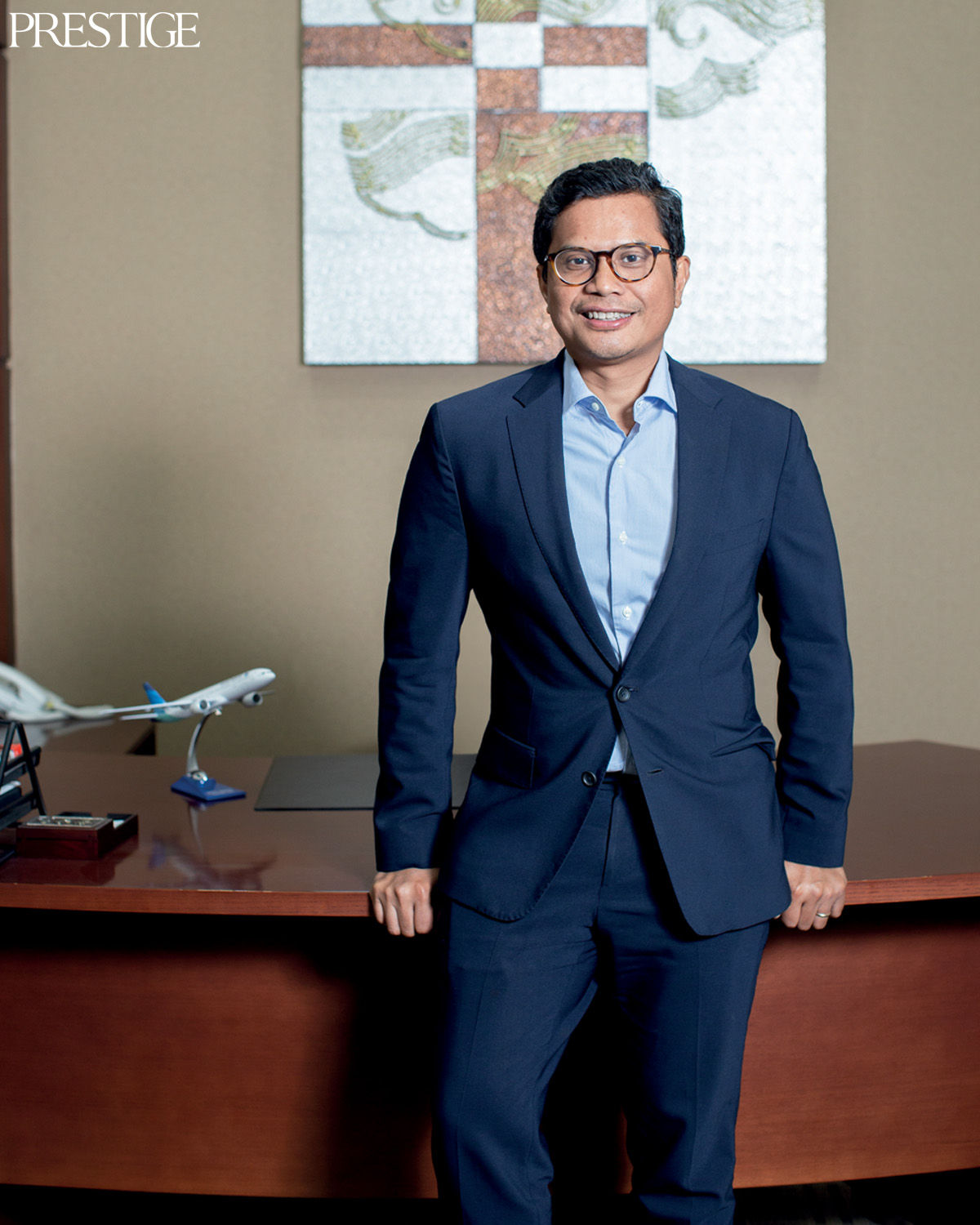 Running the national airline is surely one of the most complex leadership tasks imaginable. Pahala Nugraha Mansury, who stepped into the CEO hot seat at Garuda Indonesia last year, met with Ronald Liem for an exclusive interview.

In the highly competitive airline industry of today it is how well a carrier manages its customer touchpoints that can make the difference between success or failure. No one knows this better than Pahala Nugraha Mansury, President Director of Garuda, “the airline of Indonesia”.

The “five star” airline, he says during an exclusive interview, has identified 28 touchpoints that it is constantly looking to improve. These are the ways in which a passenger interacts with the carrier, for example their reception at the check-in desk or the quality of the food on board the aircraft. Of the 28 Garuda touchpoints, says Pahala, “18 are in the cabin, whether in the toilets, the seats, the lighting, the food, the in-flight entertainment. The other 10 points come both before and after the flight, including luggage handling, the disembarking of passengers, the availability of jet bridges when passengers are boarding and disembarking. These are just some of the aspects that we need to constantly monitor and improve.”

Bogor-born Pahala, 47, admits that he’s still learning as a leader. “I need to be able to listen to people more,” he says. “I need to absorb their knowledge of the industry, but I need to drive things at the same time. So what I am saying is that even if you are listening and you are trying to learn, that doesn’t mean that you can’t challenge people. Even if you are listening, it doesn’t mean that you are always accepting what people are telling you. But the best thing to do is talk to people and to learn.”

Also visit: What’s inside the Power issue of Prestige August 2018

The complexity of Pahala’s task is mind-boggling. Garuda Indonesia is not just an airline like low-cost carriers such as Air Asia or Lion Air, which are seen as more nimble businesses. Garuda is a multifaceted organisation. It has a number of subsidiaries, including its own LCC, Citilink. Aircraft maintenance firm GMF AeroAsia, travel, hotel, transportation and catering services firm Aerowisata, computer reservations provider Sabre Travel Network Indonesia, ground-handling services provider Gapura Angkasa, IT provider Aero Systems Indonesia and Cargo Garuda Indonesia are also part of the Garuda Indonesia Group – and Pahala is ultimately responsible for each of them.

“There is nothing like running an airline,” he laughs. “When I was young I never imagined I would end up becoming CEO of Garuda.” Pahala is a finance guy with a Bachelor’s degree in Accountancy from Universitas Indonesia and an MBA from the prestigious Stern School of Business at New York University. Before moving into the Garuda hot seat last year he was Director of Finance and Strategy at Bank Mandiri, the largest lender in Indonesia in terms of assets, loans and deposits.

He laughs: “I do think it’s a very enjoyable experience, in spite of the blood, sweat and tears that go with the job. It’s a very entertaining industry as well. There are so many different thing you can do, the in-flight entertainment, the services in the cabin, the distribution channels, the pricing, the loyalty programme.

“I would say that the loyalty programme here is not like any other industry. The more you fly, the more you get, the more miles you earn the more you probably have to burn. For me, there are so many different parts of the thing, many more than in the banking business.

“When I was offered the job, there were three things that really made it interesting. One was the opportunity to learn. It’s so enormous because of all the challenges, the competition, dealing with different parties. In many ways you take on the role of a diplomat, for instance when you are involved in negotiating air service agreements with other countries and alliances with other airlines.

“Number two is the opportunity to be able to compete internationally. If you think about it there is no other company in Indonesia that has competed globally so successfully. At Garuda Indonesia, 50 percent of the revenue is coming from our international routes. And we have to compete with the other names that are already established.

Garuda may not have the financial resources of, say, Singapore Airlines or Emirates. But it does have a proud track record as a “five star” airline. The turnaround began under former CEO Emirsyah Satar. In 2014, Garuda became one of seven airlines to earn a coveted five-star rating from Skytrax, a UK-based consultancy.

“The reason why so many people are forwarding the announcement that Garuda has won Skytrax’s Best Cabin Crew Award in 2018 for the fifth year in a row is because they are actually amazed,” says Pahala. “There are not many companies in Indonesia that can effectively compete against the global giants. We are a world-class airline with an abundantly rich Indonesian service culture that we’re proud of.”

How does he aim to keep the airline competitive in the next few years? “The way we look at it is that Garuda Indonesia started as a full service carrier,” Pahala replies. “But we need to go beyond being just an airline and think of ourselves as a business group. We have the airline, the low-cost carrier, we have the Garuda maintenance facility. We have catering and ground-handling services. We hope that in the years ahead we will be benefiting from the growth of the aviation industry, no matter which company in the group wins. The first thing that we want to accomplish is to really become an integrated aviation group. We need to look at the opportunities we have to create value beyond the airline.

“Right now, Garuda Indonesia is contributing about 75 percent of the group’s revenue. Citilink is at about 15 and GMF AeroAsia at 10 percent. The way we look at it, Garuda Indoensia needs to look at four separate areas for growth. Focus number one is international, number two is domestic full services. Next is a low-cost carrier, which is actually done by Citilink. The fourth is in regional jet services through the Garuda Explore brand, which we want to grow.” The last is a regional subsidiary tht used rand-new Aeropastiale ATR72 turbopop aircraft to fly to smaller cities with smaller runways.

Pahala goes on: “Now, where can Garuda Indonesia grow? Its mission is to compete in the premium market, whether it is international routes or in the domestic market. Meanwhile, the growth of Citilink will come from the expanding low-cost market. So if you think of Garuda Indonesia as two carriers – one international, one domestic – we have a total of four airlines with different market positionings. How good we are at growing each of these businesses will determine our success as a group.

Also visit: 3 of the world’s most remote and beautiful places!

The way forward is based on two visions: Pahala says: “The first is to optimise our strategic assets. All of our airplanes are new. Our airplane age average is 4.5 years, much younger than our regional competitors. We need to add frequency, add more production, add more destinations. China is the market with the biggest potential. We want to work with our SkyTeam (Airline Alliance) partners, including China Airlines, China Southern and China Eastern. Now, we are flying to seven cities: Shanghai, Beijing, Chengdu, Guangzhou, Zhuzhou, Xi An and Hong Kong.

“How are we going to improve our China strategy? I think it has to be done not only through developing our own network but also by developing partnerships. These are absolutely critical for us going forward. You have to become a good diplomat: what you give to me and what I give to you. You give me access to your domestic market, and I give you access to my domestic market. To fly to the US, for instance, what we have to do is to partner with somebody

Don’t all those awards it has won for world-class customer service excellence suggest that Garuda is on the right path? Pahala agrees that the airline has made great strides, but he adds that it must never become complacent.

“We have one of the best safety records in the region and our overall on-time performance, which indicates operational excellence, is actually quite good. We have the best cabin crew, yes. But there are certain areas that we need to improve. What we need to do is to actually deliver world-class customer service before the flight, during the flight and after the flight. Our service in the cabin is really good, but how about the experiences the customer goes through before and after the journey? Those are important too.”