Anne Patricia Sutanto: How to Communicate with Thousands of Employees 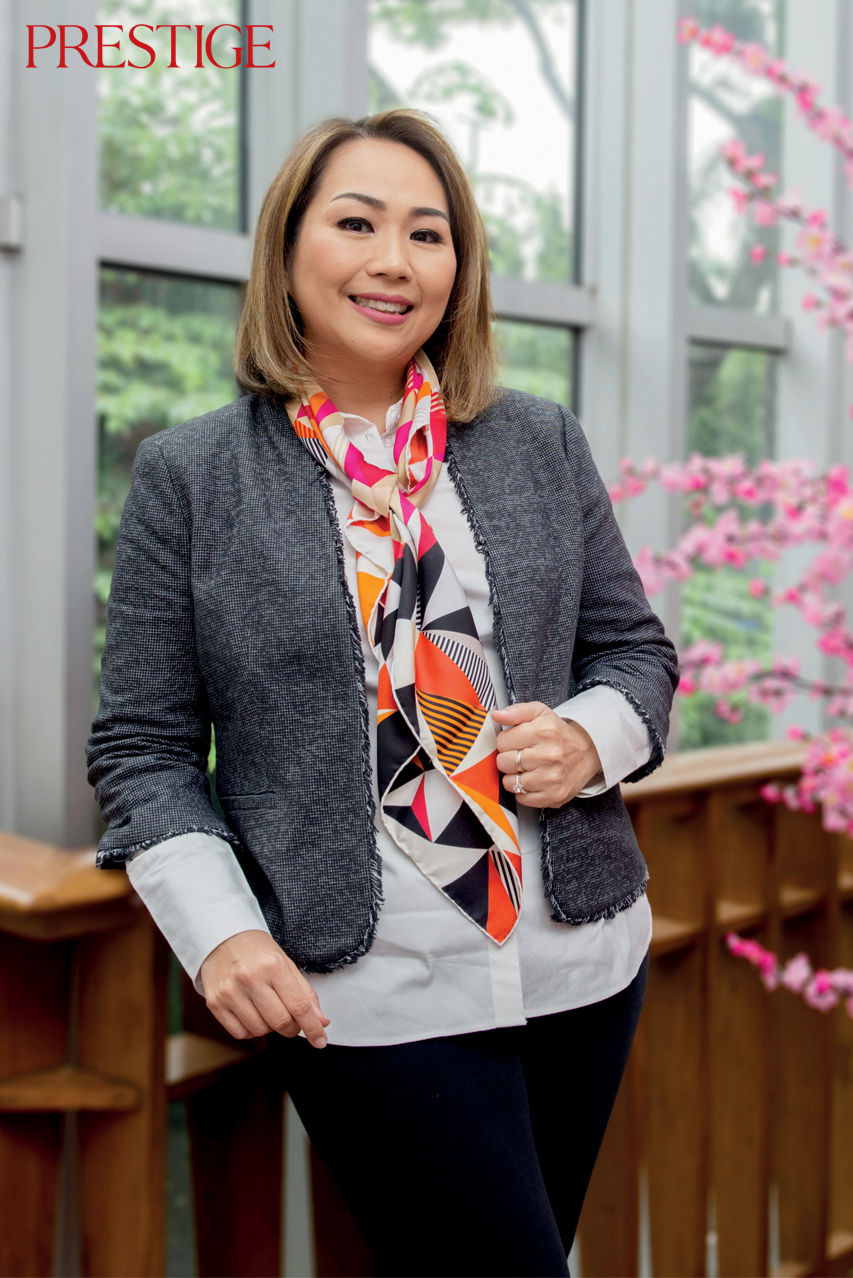 People & Events
Anne Patricia Sutanto: How to Communicate with Thousands of Employees
Share
Next article

Anne Patricia Sutanto, the Vice President of PT Pan Brothers Tbk. which manufactures garments for brands such as Uniqlo, Adidas and Lacoste, tells Ajeng G. Anindita how she communicates with thousands of her employees throughout Indonesia and how to trust your team in order to have a strong company.

To call Anne Patricia Sutanto a busy woman would be an understatement. The Vice President of PT Pan Brothers Tbk., Indonesia’s largest garment manufacturer, was in the U.S. when we asked her to be featured in our magazine and was practically drowned in work at the time. But like the champion she is, she readily set aside some time to answer our questions.

Anne was born into a business family engaged in logging and wood through PT. Kayu Lapis Indonesia, which her father and his two brothers started. She studied chemical engineering in the University of Southern California then continued her education at Loyola Marymount University where she majored in business administration. During her studies, she learned about discipline, as well as grit and endurance. “Education is very important for me since it gives me a sense of structure and prepare me to socialize, while managing a community. To me, education is not only about theory and I have always been intrigued about how people apply and adapt theories in real life,” Anne explained.

She joined Pan Brothers in 1997. At the time, the company was in dire straits and has just been acquired by Batik Keris, which was run by her uncle from her mother’s side, Handiman Tjokrosaputro. “He is actually one of my best mentors. He gave me a tough six months of training, and it turned to be the best six months ever. Heaven in hell, to be honest, and I never looked back since. He gave me responsibility, chance and trust. The trust is what I need, because I would try very hard to make sure that I do not disappoint those who give me trust.”

Talking about prominent figures in her life, she also mentioned about her late parents, Andi Sutanto and Wiwiek Tjokrosaputro. She told us that her father always took her and her siblings on his business trips, “I remember how holidays were not only theme parks and recreations, but also lunch and dinner meetings. In a way, my dad taught us since we were little to be able to work hard, but also never to forget to have fun. He taught us about balance in life.”

Anne continued: “My late mother was another character. Her loyalty and dedication as a wife and mother would always serve to inspire me. Even though I am completely in love with my work, I need to know my place as wife and mother, too.” The values she received from her parents was summarized in her motto, which is the four works: work hard, work smart, work in precision and work in faith.

And work hard she does. Under her leadership, the company grew into the largest garment exporter in Indonesia. It was her greatest personal achievement, she acknowledges. Pan Brothers now focuses on selling to exports markets in the U.S., Europe, Asia, Canada, Australia and New Zealand. Currently, 95 percent of Pan Brothers’ products are shipped overseas. Its Tangerang factory makes woven garments, technical-functional active wear jackets and cut-sewn knit garments for international brands like Uniqlo, Adidas, The North Face, Lacoste, Columbia, Prada and H&M, among others. The company also has built new factories in Sukabumi, Bandung, Boyolali and Sragen. Employing more 37,000 employees, it now produces 111 million pieces annually.

Pan Brothers also has an admirable set of CSR programs: Sending medical aid to Papua, organising health education programs to raise awareness of cancer and HIV, providing assistance to earthquake and tsunami victims in Lombok and Palu and more.

Outside of Pan Brothers, she took over the management of several subsidiaries of PT. Kayu Lapis Indonesia and then founded an export oriented homeware company, PT Homeware International Indonesia, together with her husband in 2004. Furthermore, she has a stake and commitments through a separate management team in multiple establishments engaged in cocoa processing, CPO and EPC.

All this got us wondering, with thousands of employees spread across Indonesia, has communication ever been a problem for her? “I always need to delegate, since we only have 24 hours a day and seven days a week. I have dedicated, trusted and reliable teams and I rely on them. From time to time, I also need to ensure that my teams are strong and have the same values and commitments. To be fair, this is what I manage actually, ensuring we are all aligned, so each of my teams could work within the same four mottos I told you before and they could independently run the operations with that values.”

Anne readily admitted that she does talk a lot and that she likes to talk. She likes to communicate with her team in any way she can. In this day and age, where you can spread news in seconds, she finds that communication should not be a problem. “I like to communicate with them through direct meetings, direct calls, messages and emails. And I also encourage them to do the same, as I believe communication works both ways: I need all of them to be able to speak their minds. It is the base of trust and of a strong team, and if you have a strong team, you have a strong company,” she elaborates. “There are two ways of communicating, from top to bottom and bottom to top. Above all, I always believe in having good management teams who care about what they do and have a clear understanding of the short, medium and long term plans, so they could see their future and their company’s future.”

“I’ve always told my team to have high goals and to systemically align them within our platform. Sharing ideas, issues and situations is good way to ensure that we are not just dreaming, but we actually shape them into facts and reality,” Anne went on. “Encouragement, benchmarking and breakthrough training are our way to ensure that creativity and innovation are welcomed in this company.”

It should perhaps not come as a surprise for us to learn that she displays the same level-headed attitude when things go wrong. “With logic and positive-minded solutions. For me, if things go wrong, I have to quickly analyze, prepare and act fast. My motto is to decide fast, monitor and revise if necessary since you cannot turn back time and momentum is of the utmost importance.”

The most difficult time for Anne was when she had to deal with legal troubles in Solo, which resulted in her losing one of her garment factories that she managed back in 2007. It tested her, but made her stronger as well. As she had seen the worst she is now prepared for anything.

“There’s no such thing as difficult people, but there are challenging people out there. Managing around forty thousand people across the companies is indeed challenging. However, I love challenges; I am always intrigued by human behaviour—why people do what they do. I have dealt with a lot of people, and each and every one of them helped me learn more about how to manage people. It is a continuous learning process, which I love to do, so as long as I do not stop learning, I am good.” Another thing she’s always learning about is spotting the qualities and skills needed for those in important positions. “A good, logical person who focuses on performance, execution and solution-oriented” are the qualities she’s looking for in a candidate, especially for dealing with thousands of employees in the companies.

In 2015, Anne was featured as one of the most powerful women in Asia by Forbes Asia. She is also a mother of two and has known her husband, Edmond Setiadarma, since they were 16 years old. According to her, her children, Emilio and Elena, are the guardians of her sanity and her faithful sounding boards. The balance between her work and family help her sleep during the nights. “I have this ambition that I always want to live my life to the fullest, either being with my family as a wife, as a mother or with my work. To maintain balance, having quality time with my family is a must. I believe that maintaining balance isn’t only about how much time we spend with family, but on how much quality time we get with them,” Anne points out, before mentioning how she also enjoys running as her main exercise, as well as biking and swimming from time to time.

As our conversation came to a close, Anne expressed her hopes and wishes for the company, “We are now focusing on Industry 4.0 through automation and digitalization and working on how to be the largest garment manufacturer in ASEAN, then in Asia and globally. For my other companies, I am looking forward to expand our growth to two digit levels in the next five-to-ten years plan.”