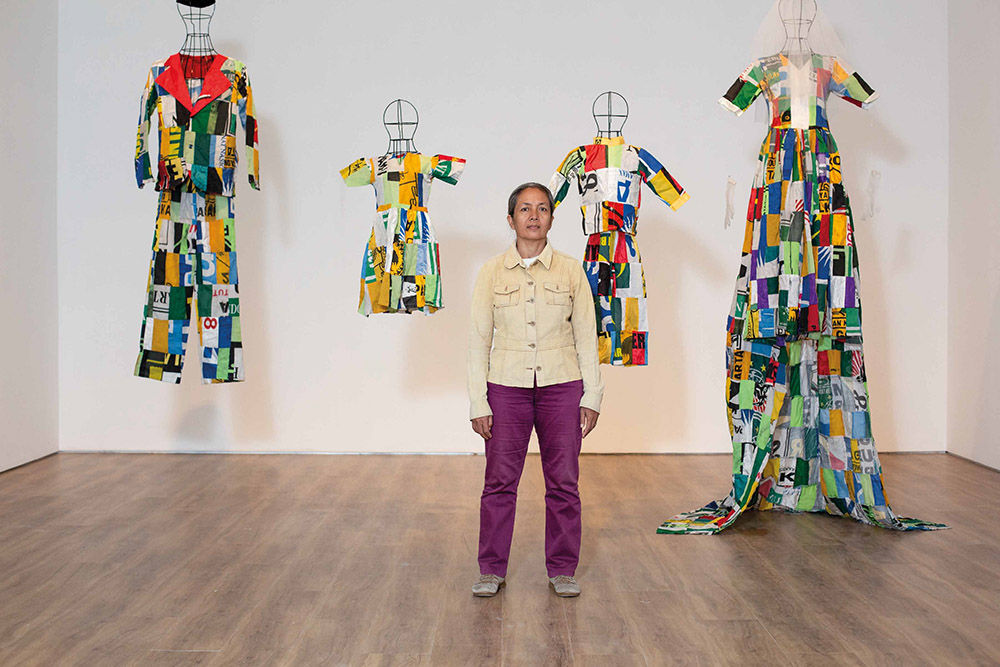 Performance or happening artists have a way of making us see the dark side of society’s norms. Arahmaiani, whose recent retrospective “The Past Has Not Passed” at Museum MACAN won great acclaim, told Liviani Putri how she has overcome scorn and condemnation to tell us some uncomfortable truths.

Death threats over an “obscene” painting. A month behind bars in a military camp. Self-imposed exile from Indonesia for four years. Such were the struggles of Arahmaiani as a young performance artist. And then came the day when, in a store room at the privately owned Museum MACAN in Kebon Jeruk, she rediscovered a painting she feared had been lost forever or destroyed more than 20 years before.

“Aaron Seeto (MACAN’s Director) told me that my painting Lingga-Yoni was here,” Arahmaiani recalls during an exclusive interview at the museum. “I couldn’t believe it, I thought he was joking. Because it just made me sad to think what had happened in 1994. He invited me to visit the museum and when we went into the room where it was kept and I saw it again after all that time, I was shocked and overwhelmed with joy.”

Lingga-Yoni depicts the artist’s fascination and long-term experimentation with symbolism and the syncretism of culture of her native Java. It’s an uncompromising work designed to shock with its Hindu images of male and female genitalia. With Malay-Arabic letters saying “Nature is a book”, it has an inscription about King Purnawarman of the first Hindu kingdom in Java.

At the same as she first exhibited this painting, Arahmaiani introduced her installation Etalase. This brought together disparate symbols of Islam, Western culture and sexuality: the Quran, a Buddha statue, a mirror, a pack of condoms, a Coca-Cola bottle, a box of soil, a fan, a small rebana (a traditional tambourine) and the artist’s photo of her performance.

Both works generated fury from Muslim fundamentalists during their first display in Jakarta in 1994. After receiving death threats, Arahmaiani decamped for Thailand and Australia, staying away until 1998. Never sure what had happened to her work, she later created a new version of Lingga-Yoni for exhibition at the Herbert F. Johnson Museum of Art in Ithaca, New York in 2014.

“I would say those artworks that raised protests and were controversial were born from several complicated issues,” says Arahmaiani, who was born in Bandung in 1961 as Arahmaiani Feisal and is the daughter of an Islamic scholar father and an Animist-Hindu-Buddhist-Islamic or syncretic local culture background mother. “They’re about culture and beliefs from many sources. There’s also historical elements about Indonesia, and how the foreign culture was adapted to the local wisdom.

“In Lingga-Yoni, I tried to explain how Arabic words were adapted for local languages, and later people called it Arab Pegon or Arab Gundul in Java, or Arab Melayu or Jawi in Malay culture. Meanwhile, the economic system and global politics were the issues I addressed in Etalase.” Now based in Yogyakarta, Arahmaiani is considered to be the pioneer of performance art in Southeast Asia. Never one to be cowed by fanatics or zealots of any sort, she tells the truth as she sees it, frequently making her art serve as a critique of social, religious, cultural and environmental issues.

“The Past Has Not Passed (Masa Lalu Belumlah Berlalu)” was a major survey exhibition of the artist, featuring works from the 1980s until today. It was an exhibition of an extensive archive. With more than 70 pieces including paintings and installations. Re-enactments of iconic performances were presented alongside some of her most recent projects and earlier works, notably Lingga-Yoni.

Says Arahmaiani: “Finally it came back to Indonesia after staying abroad for 23 years. It was exhibited in the museum and I didn’t hear of any protest or extreme reaction. I’m so grateful and happy, because now people understand the ideas and thoughts that I wanted to express. Those threats that were made at me in the past were basically a misunderstanding and lack of knowledge about Indonesian culture – by a group that claimed they understand Islam, but didn’t know about the local Islamic approach.”

As Museum MACAN puts it on its website, “Arahmaiani’s practice often combines art and social activism with a focus on issues such as cultural diversity, consumerism and gender issue that have become pivotal to her art-making. With international recognition and regular participation in international events such as the Asia-Pacific Triennial (1996), Havana Biennale (1997), Gwangju Biennale (2002) and the 50th Venice Biennale (2003), Museum MACAN aims to create further opportunities for the Indonesian public to learn about and appreciate the artist’s works.”

Rather than a performance or happening artist, she sees herself as a “transdisciplinary” practitioner, combining the fine arts, dance, music and poetry with the social, political, cultural and natural sciences and philosophy.

“From a very young age I loved to draw, paint, dance, playing musical instruments and write poems and short stories,” says this extraordinarily gifted woman. Several “people in my life influenced me to become an artist, such as my grandfather, R. Saboer, who taught me pencak silat and dancing. When I was a teenager, studying Affandi’s and Van Gogh’s works inspired me to express myself freely.

“After graduating from high school, I went to study Fine Arts at ITB (Bandung Institute of Technology), majoring in painting. But I did get my degree later, since I took part in a street performance of paintings and poems that questioned the meaning of independence on August 17, 1983. It was condemned as a subversive action. The military arrested me and locked me up for a month at the military base in Bandung.”

Arahmaiani’s studies at ITB came to an end along with her imprisonment “although it was hard and scary, I never regretted it,” says the artist of her brush with the New Order. “It was a precious experience to find my life journey as an artist. Somehow it gave me the strength to prove my creativity.

“After that, I became more interested in Indonesia’s New Art Movement (Gerakan Seni Rupa Baru). After receiving a scholarship to study at AKI (Akademie Kunst Industrie) in Netherland, I learned about Joseph Beuys.” Beuys (1921-1986) was a German performance artist, a painter, sculptor, installation artist, graphic artist, art theorist and pedagogue. “I also learned about culture, local wisdom and social and political issues from (the late dramatist, poet, activist, performer, actor and director) W.S. Rendra. He inspired me to learn more about Javanese culture from critical perspective.”

What is Arahmaiani currently up to? “I’m involved in an art exhibition with environmental theme, ‘Bruised: Art Action and Ecology in Asia’ at RMIT (Royal Melbourne Institute of Technology) Gallery in Melbourne, where I perform Breaking Words,” she replies. “This is a performance that embodies Buddhist ideas of impermanency. People are invited to participate, writing a word that has a deep meaning in their life on a white plate.” She stacks and smashes the plates against the wall as a way to express how impermanent is the idea in peoples’ mind.

“I’m also working on several long-term community-based projects in several cities in Indonesia. The latest one is in Bali, starting last year with a performance of Proyek Bendera (The Flag Project) that focused on cultural diversity, beliefs and environmental issues. This project began in Yogyakarta in 2006, after the massive earthquake, as I started to work with Pesantren Amumarta, the oldest Islamic school to create art and some eco-friendly products such as batik, natural cosmetics and bio-fuel from Nyamplung fruit (Calophyllum inophyllum).” The cooperation continues with a group named The Performer and Tritura and is spreading to East Java, “where I work with the Keraton Ngiyom community in Ngawi.”

For Arahmaiani, art and life are inseparable – hence her passion for protecting the environment and fighting climate change. “Art is humanity’s most sincere expression,” she says. “Art tells us about how people see life from different perspectives. Art embodies the courage and creativity that helps us to understand life’s realities and challenges with dignity and humanity.

“Those inspirations come from what I see around me and from my experiences of living in different societies with different ways of seeing social status, ethnicity, religious beliefs, culture and ideology. I look a lot at how our conscience and the mind operating, either in a positive way like showing love and compassion, and in a negative way in terms of ego, anger, jealousy and greed. So I think art is the human most sincere expression. As part of the life journey, art embodies with courage and creativity that helps us to understand the life reality with dignity and humanity.”