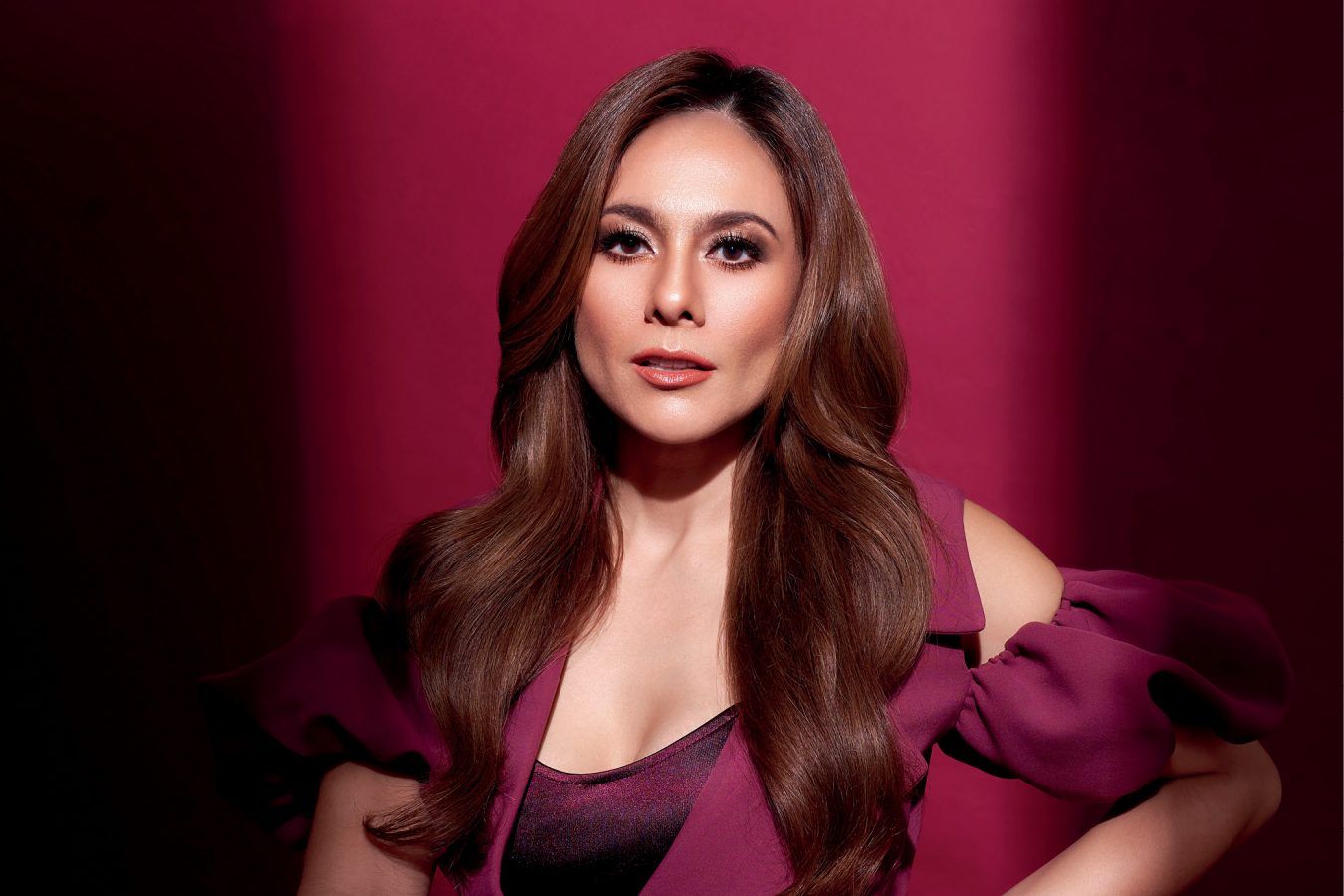 Actress, entrepreneur and dedicated mother-of-three Wulan Guritno shares the story of her newest breakthroughs in the realm of cinema, her brand ambassadorship for ERHA Ultimate Anti Aging, and the way she embodies the ideas of being “ageless” and limitless.

Indonesians are returning to the cinema. While stringent health and safety precautions are enforced across theatres, people are once again flocking to the cinema to catch the newest movies on the big screen. But what’s really uplifting today is not just the fact that Indonesians are returning to cinemas, but it’s also that Indonesian movies are making a strong comeback and – on quite a few occasions – dominating box office numbers. One title that’s attracting a lot of attention is Naga Naga Naga, starring our cover story of this issue, the one and only Wulan Guritno.

“I thought that Nagabonar Jadi 2 would be the end of Nagabonar, but as it happens there’s a sequel,” Wulan begins. Perhaps a short primer is in order here. In 1987, a movie titled Nagabonar was released. It proved to be an important milestone in the history of Indonesia’s movie industry and remains much beloved decades later. So much, in fact, that a sequel – the aforementioned Nagabonar Jadi 2 – was released in 2007, also to much acclaim. Fast forward to today, and Naga Naga Naga turns the Nagabonar saga into a proper trilogy.

“Revisiting my character feels funny, especially when we’re all together and it’s all the same actors,” Wulan says about returning as Monita, the love interest in the second movie who has now become the wife of the main character. “You know, it’s like a reunion. Throughout the pandemic, there have been many reunions by the cast of hit series like Beverly Hills 90210 and Sex and the City, right? It’s basically the same feeling as what the actors of those shows went through.”

It certainly helps that her character hasn’t changed at all, as does Tora Sudiro’s Bonaga who is the protagonist of the two sequels. In fact, the way these two characters remain unchanged despite changing circumstances – mainly that they now have a daughter, charmingly played by Beby Tsabina – is what drives the narrative. That sense of familiarity, however, also makes for a pleasant on-set experience for Wulan and her fellow cast members. “Tora is constantly joking and there’s om Dedy [veteran actor Dedy Mizwar who reprises his role as the legendary Nagabonar] with his bits of wisdom … there are quite a lot of memorable moments during shooting,” Wulan reminisces.

“We must always have this notion of being limitless in everything, because once we don’t, we don’t grow, we become stagnant”

While there’s certainly plenty of fun to be had while filming, the multi-award-winning actress has been quite busy in the past couple of years. “I’ve stayed productive throughout the pandemic; I kept working. We shot Naga Naga Naga two years ago but only released it now,” Wulan shares, before mentioning several of her other upcoming titles, including Tumbal Musyrik which will launch in several countries as it’s a collaborative production.

And it seems that this is part of an ongoing trend across Indonesia’s film industry. “There’s hope for Indonesian films, that as cinemas return to normal – in today’s normal, that is – audiences also have faith. Then there’s the KKN di Desa Penari which has been watched by more than nine million people. No Indonesian movie has brought in that many viewers. The last record was six million plus,” Wulan notes. “Hopefully, with Naga Naga Naga being a highly-anticipated title since it’s a sequel to Nagabonar, even more people can be drawn to cinemas, and we can keep this momentum going.”

Speaking of keeping things going, working on movies is just one part of what keeps Wulan busy these days. There’s her social activism through the Gelang Harapan movement [revisit our August 2021 issue to learn more about the Bracelet of Hope and its mission], as well as a number of businesses she has going on. “And, well, of course there’s my children,” Wulan points out. “I have three children. There’s a bit of relief since one of them has grown up, but as a mother you have this constant worry and you treat even your 23-year-old daughter like a small child. I have to stop doing this and I’m trying.” She laughs as she mentions the last part.

Interestingly, there’s one more venture that Wulan engages in, one that’s in line with her personal needs and is uniquely aligned with her achievements and mindset – namely as brand ambassador for ERHA Ultimate Anti Aging, which is collaborating with Prestige for this exclusive cover shoot and story.

“At first, some of my fellow artists recommended that I try out the treatment at ERHA Ultimate Anti Aging. And you know how it is: we do our own research before opting for treatment, right?” Wulan recalls how she initially got to know the brand. “I discovered that ERHA is a trusted beauty clinic that has been in business for 22 years, so I felt that I could trust ERHA Ultimate Anti Aging. When I first came in – and by that time I was already showing signs of aging – after just one session the results were apparent. And it’s dermatologist-approved.”

The connection between artist and brand is perhaps best illustrated by the way Wulan embodies ERHA Ultimate Anti Aging’s latest campaign titled “Ageless Limitless.” Referring to the first part of the slogan, Wulan elaborates: “For sure, a lot of people have told me that I always look young. But nothing that transpires in our lives happens just like that; there’s effort that goes into it. So, being ageless means that you take care of yourself, not just on the outside but from deep within.”

The term “limitless” resonates even stronger with the actress. “As humans, we can never feel that we’ve done enough. We must always have this notion of being limitless in everything, because once we don’t, we don’t grow, we become stagnant,” Wulan declares.

“There’s hope for Indonesian films, that as cinemas return to normal – in today’s normal, that is – audiences also have faith”

On a more practical note, she’s currently undergoing ERHA Ultimate Anti Aging’s Ultimate Younger Program, which is designed for those already showing signs of aging. “I’m 41, surely those signs have appeared,” Wulan concedes, then she adds about the program: “So, this is a solution for wrinkles and fine lines, dark spots, melasma, etc. And after going through the program, the results fit my skin goals.”

Wulan has also been most impressed with the level of service she received. “What makes me really happy getting treated at ERHA Ultimate Anti Aging is their 5C concept, which is Clear Program, Clear Plan, Clear Cost, Clear Duration and Clear Skin Goals,” she explains. “So, from the very beginning, we have all the relevant information laid out clearly and the program can be personalized to our needs and skin condition.”

As our conversation winded down and came to a close, Wulan returned to the idea of being limitless. “I want to grow until I reach the point where I’m truly content, truly peaceful, but still creating – and not only creating works that I can be proud of but works that will be useful to others,” she considers.

Wulan Guritno has often been considered an ideal example of what aging gracefully is like. Despite her years and her burdens, she stays on top of her game, raking in achievement after achievement. In short, when you see her, it’s not hard to see how she embodies the idea of being “ageless,” and when you see her works, her accomplishments and her triumphs, you gain a new perspective on what being “limitless” can mean.