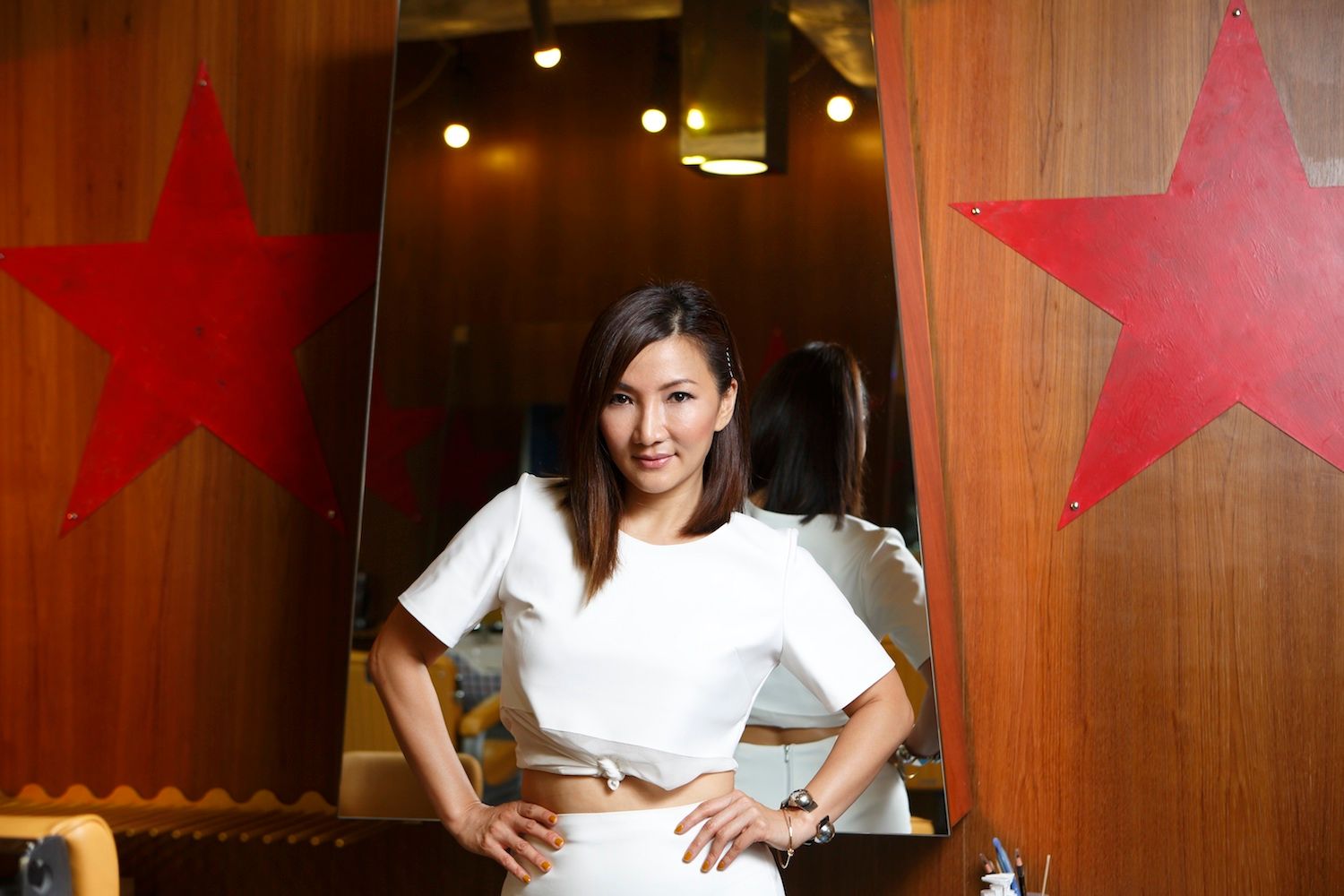 It’s 11.30am, and I’m having a glass of rosé with Cynthia Chua — all in the name of work, of course. Over a year has passed since my last chat with the lifestyle maven, who was launching the groundbreaking, taboo-smashing Two Lips vulva mask at the time. Since then, Chua has certainly been keeping busy. She has had her hands full with Drunken Farmer, a travelling pop-up natural wine bar she launched early last year. Our meeting takes place a day after a three-day, three-way festival by Spa Esprit Group, which saw Parisian natural wine bistro Aux Deux Amis collaborating with local restaurant Ding Dong, and Singapore’s own Drunken Farmer, Eduardo Bayo, for wine-pairing dinners and a festive flea market. Our breakfast rosé is picked by Chua herself, who is keen on making me a natural wine convert.

What is natural wine?

“The word ‘natural’ means it includes as little intervention as possible. Nothing is added. Nothing is taken away,” Chua explains. Often referred to as ‘low intervention’, ‘naked’, and ‘raw’, they are made from organic grapes grown without pesticides or herbicides and do not contain additives, added yeasts, or preservatives. Even sulfites — used to preserve the taste of the wine at the time of its bottling — are avoided or used in tiny amounts. “That sleepiness you feel from drinking wine? You’d think it’s the alcohol, but it’s the sulphites and preservatives. They give you that sinking feeling and a hangover,” Chua continues. Which explains why I agreed to sip wine even before I’ve had my breakfast.

Natural wines aren’t a new phenomenon. Many people believe that the movement began in rural France in the 1960s, but its surging popularity can be attributed to today’s more conscious, climate-concerned, clean-eating generation.

Chua first discovered natural wines in Paris while at a lunch. “After a while, I realised that the wine tasted more alive, because it was a bit fizzy and aerated. It’s so easy to have it as a lunch accompaniment. If I have a standard glass of red at lunch, I’ll feel like I need to go to bed”.

Chua echoes fans of natural wines everywhere when she likens its light taste to kombucha. The bottle we’re sampling is the Domaine Christian Binner Si Rose. From the first sip, I began to understand why Chua described the taste of natural wine as “alive.” Light and fizzy, the wine is effervescent and tart, with pronounced floral notes and a slightly acidic aftertaste. “You taste the berries, the minerals. And they’re a lot lighter,” Chua says. “It offers diversity for people who like to drink, and people who don’t like to drink”.

Not all natural wines are created equal, or as delicious. Many of them lean towards cloudy, funky, or murky. The trick to educating the public, as Chua highlights, is curation. While she handpicks these labels from growers and farmers, it’s Bayo who heads up her wine distribution arm and personally selects them for her F&B brands.

More than a bottle

For Chua, natural wines are far more than a concept, or a delicious bottling. “Because it’s as natural as possible, I feel like I’m drinking the life of the earth,” she offers. “It speaks the language of the terroir and represents the character of the area where it is made.” Its taste is dependent on the winemaker’s creativity. “It’s as though someone made you leather with their bare hands. It’s created with pride, passion, and is not about commercial farming. The personality of the farmer who made that small batch of wine is symbolised in that bottle.”

The past few years have seen Chua transforming into a silent purveyor of Parisian bistronomy, a change she says began when she created Tiong Bahru Bakery. “Now I’ve ironically got a French boyfriend,” Chua says with a boisterous laugh. Commuting between Singapore and Paris with him, she attributes her stay in the French capital as the crux of her Parisian influence. “Cross pollination is always interesting for me. Where I am, it’s easy for me to cull those talents. With French chefs, they have a lot of culinary talent but the opportunities are not as rampant. Singapore, on the other hand, has people wanting to eat good food. Yet the talent is not quite there yet”.

She cites Open Farm Community’s Head Chef Oliver Truesdale Jutras and Sous Chef Phoebe Oviedo from the French countryside as among the people she brought in. “I enjoy being able to connect talents,” she says.

Master of all trades, jack of none

For the lifestyle maven, moving from vulvas to wines was a natural move. It is, simply, yet another expression of her creativity. “People find it strange that I have so many brands. Investors might think it’s unnecessary because they think you can’t focus.  But I don’t want to stifle my creativity”. Today, she has 16 brands and counting, with over 100 stores across the globe, spanning hair removal salons to award-winning cocktail bar Tippling Club, cafes Common Man Coffee Roasters and 40 Hands to urban farm-to-table restaurant Open Farm Community, as well as Ding Dong, which serves up Southeast Asian small plates.

“If your heart is in it, your tenacity will come with it. “
Cynthia Chua

“I like to pioneer new markets, whether it’s a Brazilian wax, vulva masks, or the farm. It’s relentless.”

But Chua is now selective with her ventures.”I like to spot trends and bring it here. But now I need to understand that resources are finite. How can I affect people in a big way while doing what I like to do?”

Not your usual childhood ambition

When asked about the one thing she has yet to accomplish, Chua waxes lyrical on her childhood ambition. She wanted to be a soya-bean seller. “I would fill the sink with water and I would have cups and bags on the side to sell my beans and cincau (grass jelly). I would scoop and play for hours. I’ve always liked playing with my hands, and I want to use them in an artisanal way”.

After much musing, she arrives at a vision of a tropical apothecary line of soap. “I get scraps and visions of this dream, and a lot of it has to do with the garden, or my aromatherapy background. I’m thinking of perfume, and how best to capture Singapore in a bouquet. I want to work with plants. I want to incorporate meditation”.

Chua tells me that her work ethic has changed since her move. “The letting go was difficult. I had people telling me my empire was going to die. My dad questioned me. ‘Follow the French guy to France for what?’,” she lamented.

“It’s hard to let go when you’re an entrepreneur. I would go to one of my shops and see things no one else sees. I’ll see that the giraffe is crooked. The scratches on the wall. Or notice that the music is not right for the morning. Prioritisation was never my word. I felt like I could do everything. I had to-do lists for all but that isn’t necessarily sustainable. It’s okay when you have one shop. But when you have a hundred, you will die.”

Easing her grip on the reins has been rewarding for Chua and her team. “I just had an appraisal with my staff and they told me that the best thing I did for them was to leave them. They felt the need to step up as leaders, and were empowered. I saw how capable they were.”

“There is a thirst to go in within myself. “
Cynthia Chua

Three years of spending much of her time abroad has done wonders for Chua.  “I’m more calm now. I feel like my heart has become bigger. It’s more encompassing and embracing. The energy is different. I’m more comfortable, forgiving, and patient. This year, I simply want to go deeper, and digest. If you’re always scratching the surface, you’ll never understand yourself.”

All photos are courtesy of Spa Esprit Group