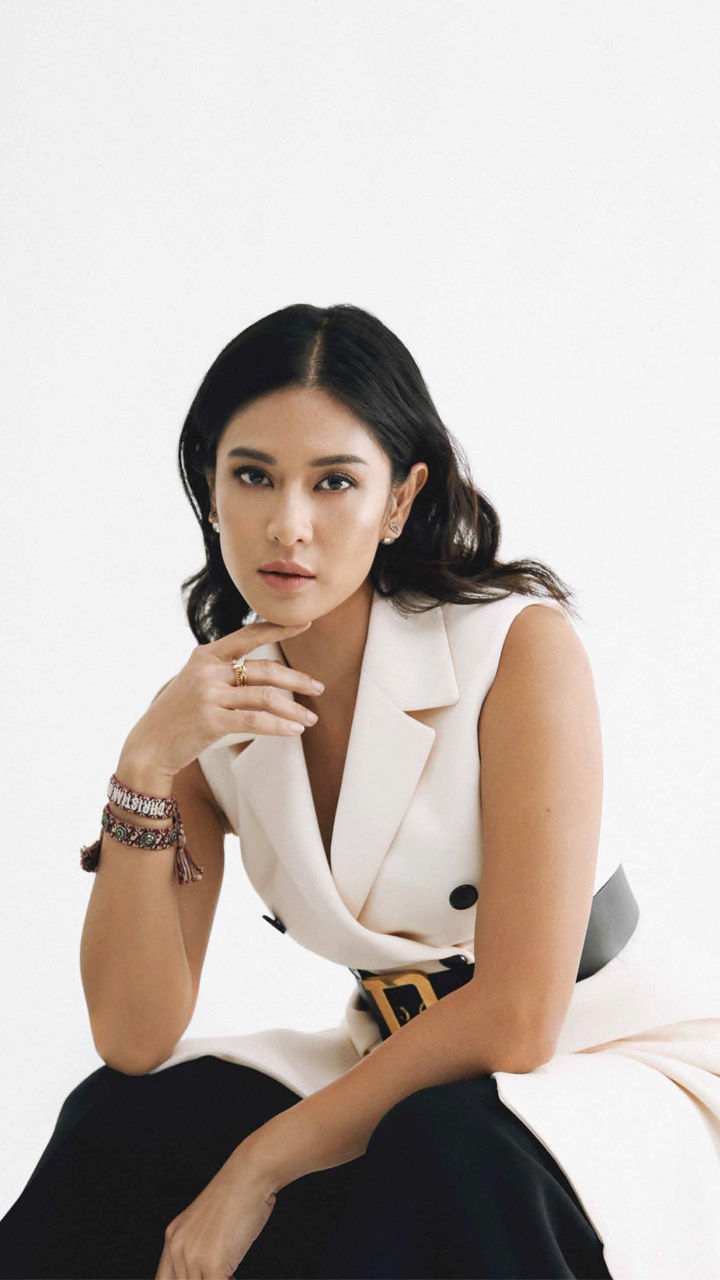 Dian Sastrowardoyo has gone from actress to movie producer. She talks to Ajeng G. Anindita about her upcoming production Guru-Guru Gokil and about the importance of women’s empowerment in the film industry.

We are all familiar with her face. Dian Sastrowardoyo has adorned the silver screen for nearly two decades since she was a young actress in Pasir Berbisik (Whispering Sands) in 2001. Now, she has extended her role from an actress in front of the camera to a decision-maker behind it.

While participating in this month’s Cover Story shoot, Dian told us about her work on her upcoming movie Guru-Guru Gokil, due to come out in April. She has been closely involved in the story development and script-writing process, as well as going back and forth, pitching to investors and fundraising. Dian has also been engaged in editing and picture locking the film, and promoting it.
“Right now, we’re approaching musicians to look into the possibility of having an original soundtrack composed and recorded, or maybe acquiring existing songs to be part of our film,” she says. “I know we’re up against the clock now. We need to finish everything fast.”

Guru-Guru Gokil is about the journeys young people often go on to find their calling. While doing her research for the movie, Dian realised that a lot of people who are in careers are actually still struggling with what they really want to do. The movie is also about finding your true self, your passion, during such a journey.

“A career should be rewarding not only financially,” Dian points out. “People need their work to have meaning. I think the younger generations right now seek more meaning in their careers compared to our mom’s generation, where they were usually just looking for financial security, and that’s something I want to explore in this film.”

Being a successful film producer means working long hours and being good at people management. When she was an actress, Dian would be called in when the script and the shooting set were ready. They gave her the script and she would learn her part and perform it. Hard work?

“Absolutely, acting wise and creatively,” Dian says. “But working as a film producer does not only involve creativity, but also a lot of technical details. I manage a lot of different people, writers and editors, making sure that everyone works to a schedule that’s been agreed on. And then there’s the work of convincing investors and getting sponsorships and selling the whole project.”

Dian is not the first, and certainly not the last, woman to be involved behind the camera in a movie production. Women like Mira Lesmana (Kuldesak, Petualangan Sherina, Ada Apa Dengan Cinta, Laskar Pelangi), Santi Harmain (producer of Pasir Berbisik) and Nia Dinata (Arisan, Berbagi Suami) are pioneering filmmakers and producers that resurrected Indonesia’s film industry.

Recently Gina S. Noor made a huge impact with her film Dua Garis Biru. On the other side of the world, women like Ava DuVernay, Kathryn Bigelow, Agnès Varda and Jane Campion are bringing a woman’s perspective to a male-dominated industry and telling the world about the importance of diversity in the film industry.

“What I really like about film and why I ended up getting into this industry is I can help in constructing how people think,” Dian says. “Film portrays and mimics what society thinks, but sometimes it also shapes how society thinks. A lot of the time, a woman’s portrayal in a movie is being told from a male perspective, which sets an incredibly unrealistic standard for women.

“Sometimes men, when they look at us, they have their own perceptions. The Bond girls, for example. They are always portrayed as this perfect woman, super flawless, always looks pretty no matter what happens to them. In real life, we deal with a lot of things! Bad hair days, sweating, hairs sticking on our cheeks and necks. It’s not going to be pretty all the time!

“I think only women filmmakers can tell honest stories about women in real life. We need to rewrite the concept and definition of women in our society. So there are no more misconceptions. Women are always expected to be pristine and beautiful, whereas in real life we’re just humans who deal with a lot of things every day.

“We need more female filmmakers, producers and writers to tell stories from a woman’s point of view. I mean, even women in Hollywood are still fighting for equality, for telling stories in a non-misogynistic way. I am so inspired that Charlize Theron produced the movie Bombshell. Margot Robbie produced and starred in I, Tonya, a film that wouldn’t have been the same if produced by a man. Elizabeth Banks co-wrote, produced, directed and starred in the Charlie’s Angels reboot. What a girl power project!”

Ruth Bader Ginsburg, Associate Justice of the U.S. Supreme Court, once said: “Women belong in all places where decisions are being made. It shouldn’t be that women are the exception.” Dian agree, noting: “If we want to become a better human race, we should involve women even more in society, in a lot of decision making, in so many industries.”

And here’s hoping that someday soon, women-focused stories and female film directors and producers will become an ordinary thing that we won’t be having a conversation about empowerment at all.

MAKE UP & HAIR BY FIRDA JEAN

ON TARA BASRO
OUTFIT BY & JEWELLERY BY DIOR