Exclusive interview with Benoit-Louis Vuitton at “200 Trunks, 200 Visionaires: The Exhibition” 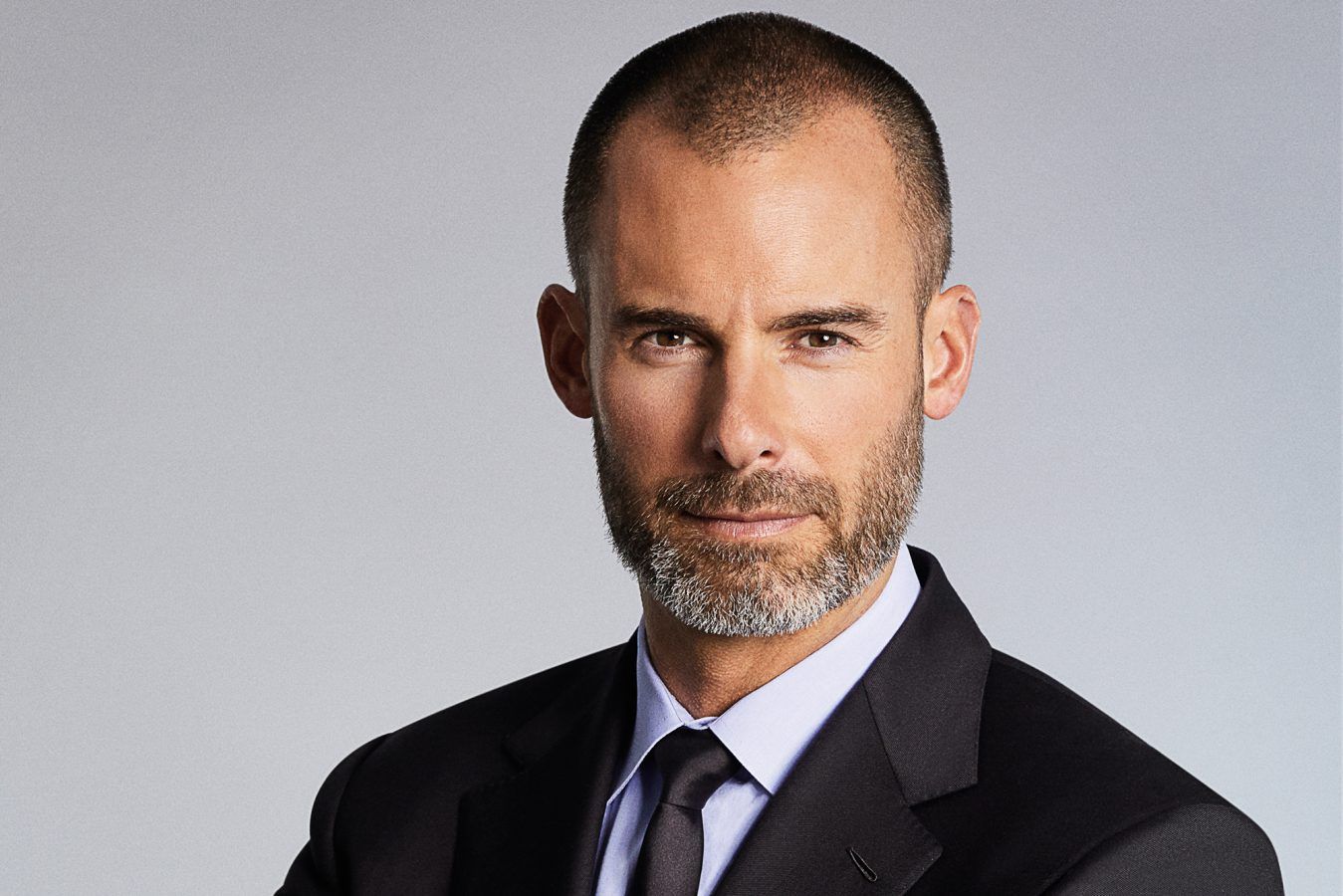 How do we celebrate a man whom we have never met? Whose face we recognise only from a single portrait and whose story we only know from folktales? Louis Vuitton is known for his ambitions and achievements as he gained a reputation for trunk-making for the esteemed and the establishment of his first shop in the middle of fashionable Paris. He was innovative not just in his craft, producing award-winning waterproof and lightweight trunks, but in many ways, he distinguished his products and company from his peers.

Benoit-Louis Vuitton, however, is not just a man in a portrait. As the great-great-great-grandson of Louis Vuitton and the Corporate Director of Art, Culture and Patrimony of the maison named after his famous forebearer, he has quite a few contemporary tales to share about his achievements and his actions for the French luxury brand. Prestige had the opportunity to meet the charming representative of the Vuitton family in Singapore, where the “200 Trunks, 200 Visionaires: The Exhibition” has made its first international stop.

The “200 Trunks, 200 Visionaires: The Exhibition” is one of the initiatives by Louis Vuitton to celebrate its founder’s bicentennial birthday. Louis Vuitton’s heritage as a trunk maker preceded even the founding of the company. After starting an apprenticeship at the age of sixteen at renowned trunk maker and packer Romain Maréchal, he honed his vision and  craftmanship and stayed for another 17 years before opening his own workshop 4 Rue Neuve-des-Capucines. As a visionary artist and a valued craftsman, Louis Vuitton realized that his rapidly growing business required a new nexus. Thus, he famously opened a workshop in Asnières, in the northwest of Paris. 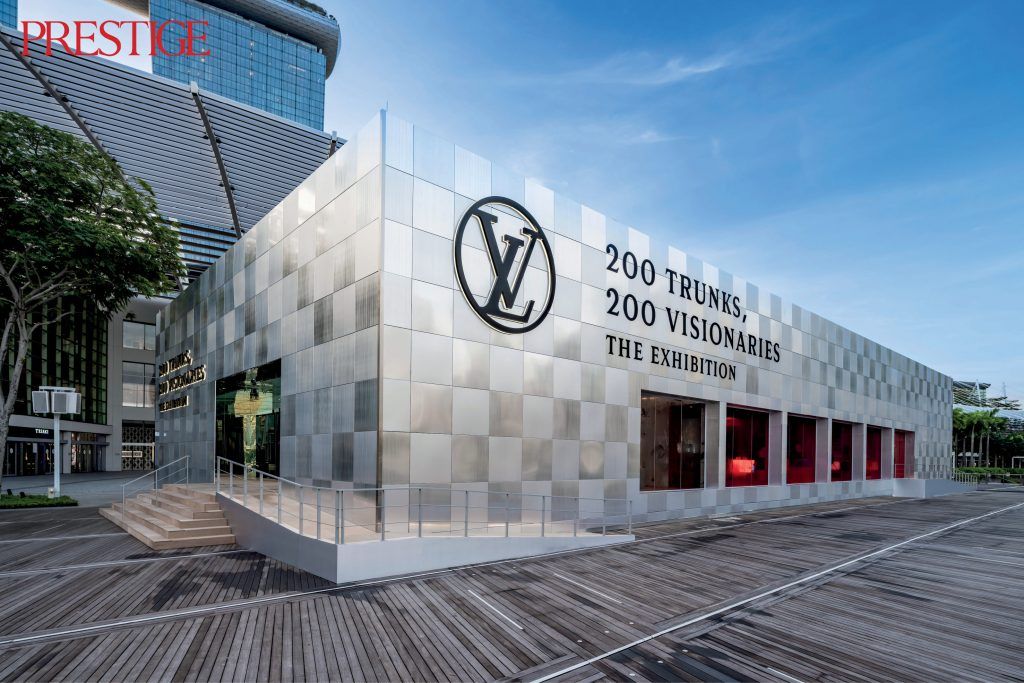 Unlike any other workshop, the one in Asnières is the heart of Louis Vuitton’s savoir-faire, where trunks and luggage pieces are constructed and then dispatched to all the corners of the world. Some 160 years later, the Asnières atelier continues to thrive, producing many of the house’s most iconic creations including leather goods and hard-sided designs, as well as all the unique and incredible special orders, all of which are conceived and created by hand. From classic flat trunks to a bespoke container for digital recording equipment, creations here span the past, present and future – showcasing a heritage to fit the contemporary age.

When the Asnières atelier was constructed in 1859, Louis Vuitton designated the top floor as a home for his new family. The Vuitton children played in the garden, rowed on the nearby Seine River, and learned the family trade in the workshops before entering into the business proper. Asnières is also the place where Benoit-Louis spent the first seven years of his life, as he grew up amid trunk makers and the wood workshops.

“From tradition we evolve and create, but with the same craftmanship and the same way of working. We respect who we are and we don’t get lost in the way.”

Today, Asnières also became the starting point for “200 Trunks, 200 Visionaires: The Exhibition.” The idea for the exhibition began with the maison’s desire to keep looking into the future, celebrating Louis Vuitton through his values. Thus the brand embarked on a daunting yet exciting journey, inviting 200 individuals from all around the world and across disciplines to share their vision, desires, fears and reflections. Each of the individual artisan, writer, architect, musician, designer and so on were given a blank canvas measuring 50cm by 50cm by 100cm – the approximate dimensions of the original Louis Vuitton trunk – as a metaphorical blank canvas or vessel. The result is an amalgamation of the past, present and future: 200 original expressions contemplating where they came from, where they are and where they might be headed.

The exhibition in Singapore was open for the public, and was held at the Marina Bay Sands Event Plaza, just steps away from the Louis Vuitton Marina Bay Store. It took place within a box-shaped building with a silver Damier pattern plastered on each side. Inside, the reinvented trunks were displayed along with the story and inspiration behind each creation. Among the collaborators were familiar names such as Supreme, Peter Marino, Lego, Liu Wei, Fornasetti, Marc Jacobs/Stephen Sprouse and NIGO. 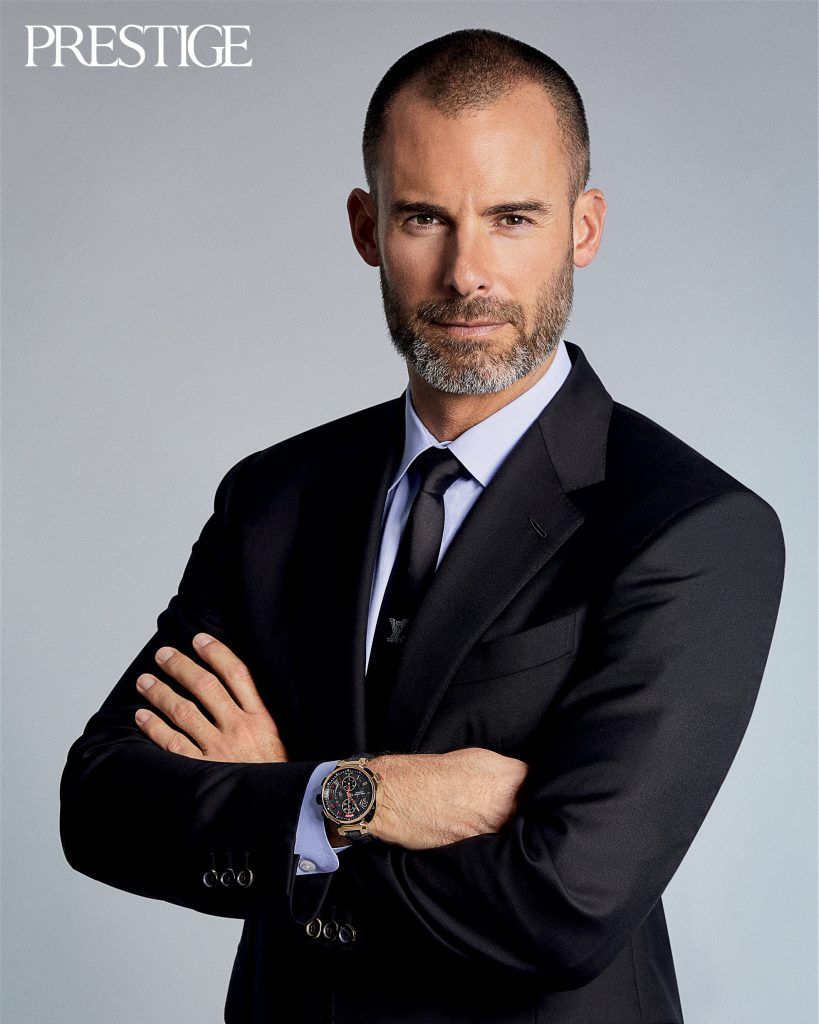 Back to the man of the hour, during at a casual sit down with the man of the hour, Benoit-Louis Vuitton talked about himself and his roles at Louis Vuitton today. A natural story teller, Benoit reminisced on how he officially started at the brand 19 years ago as the accessories manager for the New York Soho store. He was always been a fan of watches and jewellery, so the job was a perfect fit for him. Following his stint in the Big Apple, he returned to Paris to handle the marketing and jewellery department. He also spent some time as a product manager for the regular men’s watches and, in parallel, the company asked him to develop Louis Vuitton’s high watchmaking venture. At the time, Louis Vuitton only had three custom-made watch models and after successfully selling a few of them, the brand came the decision to expand the high watchmaking division, which led to the acquisition of La Fabrique du Temps in Geneva, Switzerland. They approached the manufacturer to create the Spin Time complication for Louis Vuitton, and Benoit-Louis was then put in charge of the retail development for the timepieces. The new role meant more travelling, together with Michel Navas, one of the two master watchmakers at Louis Vuitton. He also started to travel more to Singapore, Thailand and elsewhere in Asia to gain a better understanding of the region, where demand for high end luxury items has been consistently moving upwards. Naturally, this ties in neatly with his work on Louis Vuitton’s high watchmaking and high jewellery collections. 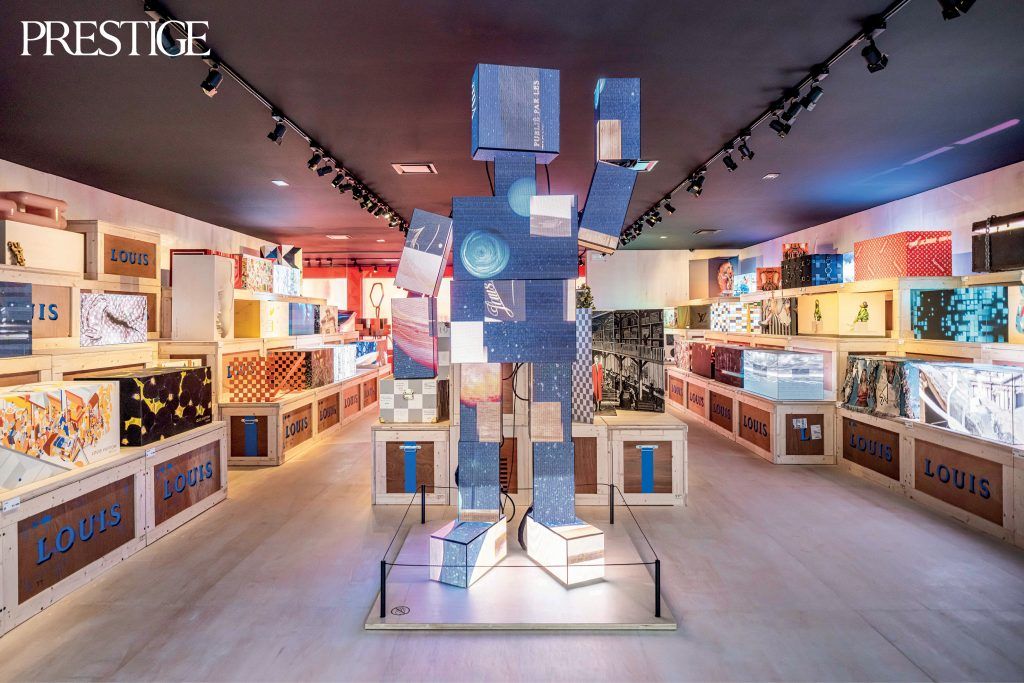 In 2019 Benoit-Louis’ father, Patrick-Louis Vuitton, passed away. So, he went back to Paris and became the Corporate Director of Art, Culture and Patrimony. The three-way role actually made sense to him because has always been in touch with the brand’s high-end customers and high-end products. Not only does he have the experience as a product manager, but he is also quite familiar with the marketing and retail sides of the business, too. And this new role essentially demands him to create a link between all the customers around the world. One of Benoit-Louis’s tasks was to be aware of what the brand’s clients do, where they are, what they are purchasing, etc., and to ensure that wherever a Louis Vuitton client might be in the world, they will receive the same level of service.

Furthermore, Benoit-Louis also overlooks the museum in Asnières, including the team running the museum, as well as the family house. As the historic home of Louis Vuitton, this emblematic site outside of Paris brings together the founder’s landmark Art Nouveau house, traditional trunk-making ateliers and a renovated gallery space. Today, Asnières represents the craftmanship and history of Louis Vuitton. Or as Benoit-Louis puts it: “When you come to Asnières, you can see the whole vision of Louis Vuitton.” 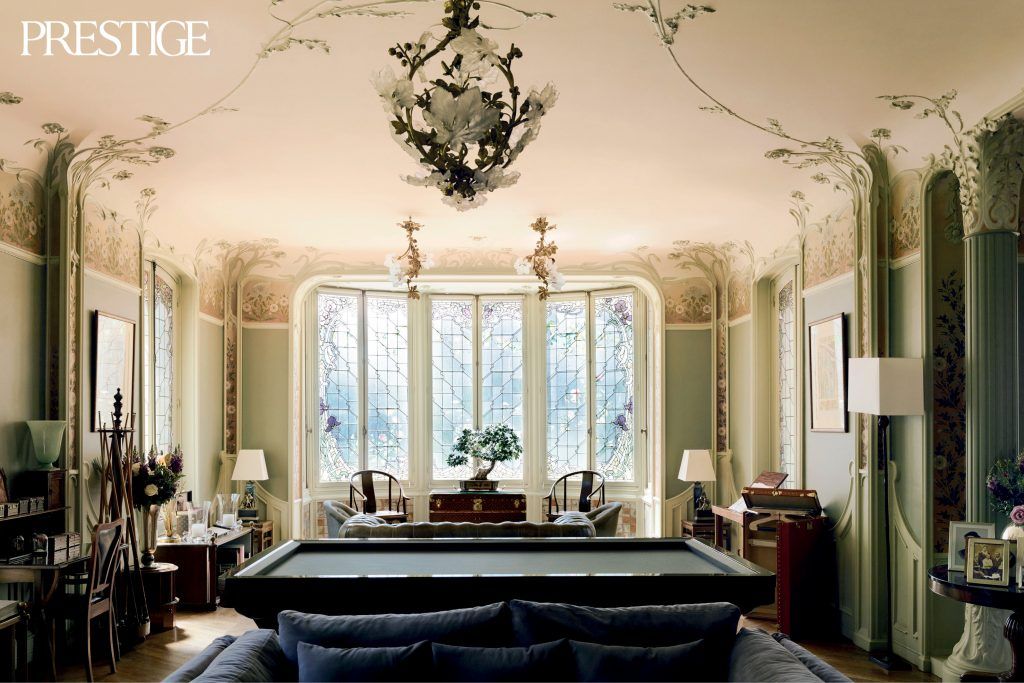 Our talk then turned towards heritage. Preserving brand heritage is something that many companies claim to do. When asked about how Louis Vuitton does this beyond events like the “200 Trunks, 200 Visionaires: The Exhibition” project, Benoit-Louis’ answer was simple: “Just go to Asnières and see what Asnières is. It is really the base and the origin of everything. On the one hand, it has evolved and on the other hand it didn’t evolve at all. It’s the same place, the same craftmanship and the same basic materials we use.” Of course, new innovations, new materials and other new breakthroughs have become part of Louis Vuitton’s identity, but Asnières is still the same as it was more than a hundred years ago. It is one way for Maison Louis Vuttion to respect and preserve its tradition.

The legacy of Louis Vuitton, from Benouit-Louis’ point of view, is to respect tradition while always looking for innovation. It is the same basic idea that Louis Vuitton took from his early years as an apprentice. Everything that Louis Vuitton made is linked to the spirit of travel. There are some crazy innovations but they remain easy to use, practical and always intended to make life easier. And that is the way the brand preserves its legacy and the DNA. “From tradition we evolve and create, but with the same craftmanship and the same way of working. We respect who we are and we don’t get lost in the way. We respect the DNA,” said Benoit-Louis in closing.