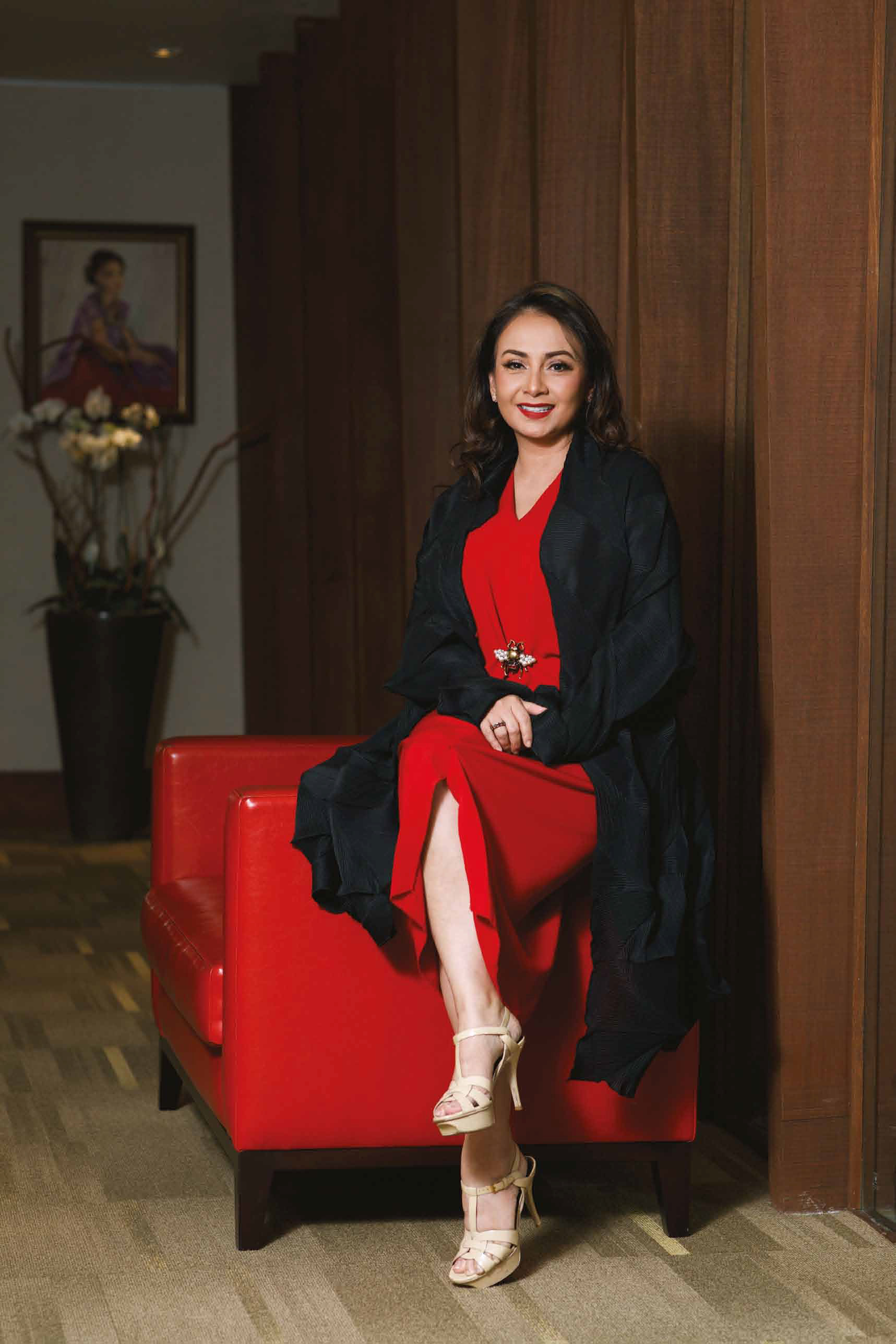 Salina Nordin, founder of Syailendra Asia, has spent years networking with investors in the Middle East, North Africa and Southeast Asia. Soon, she will initiate a major economic conference on solutions for 1,000 participants in Jakarta for beyond 2020 in December. Chris Hanrahan reports.

Some people say I’m crazy to be always wanting to save the world. But I like what I’m doing, and I enjoy the challenges,” declares Salina Nordin, the founder and Group CEO of Jakarta-based Syailendra Asia, an independent private investment firm. “At this firm, we want to achieve excellence, and we strive for it. Looking back, I think we have achieved more than I expected when we talked last.”
Speaking at her office at the Indonesia Stock Exchange Building, Salina is referring to a previous interview she gave Prestige nearly a decade ago. Back then, this magazine described her as a “bridge builder”. This she still is. In 2010, as President Director of Julius Baer Advisors Indonesia, she told us: “I see myself personally as a bridge between local high net worth individuals and asset managers and Julius Baer’s as global expertise.”

These days, Salina says, “the plan is pretty much the same as it was nine years ago.” Except now, she’s building bridges through Syailendra Asia and Heritage Amanah International. The latter is a wealth advisory firm she created after leaving Julius Baer. It is licensed by the Financial Services Authority of Indonesia (OJK) to offer “open architecture” private wealth and investment advisory services to high net worth individuals and corporates.

Salina has spent much of the past four to five years travelling to meet corporate leaders, entrepreneurs, government ministers, officials and academics in the capitals of the Middle East, North Africa and Southeast Asia. She has attempted to strengthen business and cultural ties between countries of these three regions and feels the regions are a natural fit. “They should be more connected and working more closely together to create wealth and prosperity for their respective populations.”

“I have made the Middle East and North Africa the markets we specialize in outside of Southeast Asia,” Salina goes on. “But as always with these things, the challenge is about building trust. Investors in Saudi Arabia, Dubai, Kuwait and Egypt are used to dealing with developed economies with strong democracies and legal systems outside of their own territory, where they know their money is safe. Southeast Asian is still developing and in need of more improvement in the business world. Our challenge is how to get them interested in investing in Southeast Asia which offers a wide range of business opportunities.

It starts with persuading them to come here and gain more knowledge of the countries.  The December economic conference on investment, they will get an opportunity to network and learn more about the region and the amazing opportunities that exist here. Our desire is to have policy makers use what they learn from the forum to write concept papers on investment opportunities and potential partnerships especially with the young generation who are our future drivers.  Above all, we want to attract what I call ‘real money’ that sticks, rather than just the ‘hot money’ that flows in and out of the region as political and economic events unfold.”

One of the academic thought leaders who has had the biggest impact on the way Salina sees the world in the past couple of years is Egypt’s Ismail Serageldin, the 75-year-old Founding Director and Emeritus Librarian of the Bibliotheca Alexandrina (BA), the new Library of Alexandria that was inaugurated in 2002. He has published over 100 books and monographs and over 500 papers on biotechnology, rural development, sustainability, the value of science to society and a multitude of other subjects.

When Salina first met him a couple of years ago facing a case in Egypt, the former World Bank Vice President had over 300 eminent persons, including 90 Nobel Prize winners and 20 current and former heads of state, signed a letter in support for Dr. Serageldin. “That’s a remarkable story I love to tell everyone when asks about him”. Salina says.

Dr. Serageldin will chair a two-day “The Meeting of the Minds Forum which will be held in Jakarta from December 11-12. Salina has spearheaded the forum, which will be hosted by the Indonesia Financial Regulators. The event will be attended by more than 1,000 corporate leaders, young entrepreneurs, academics, government ministers and officials, and institutions like the World Bank and Islamic Development Bank.

“We’re inviting people of eminence to attend the forum, including business leaders with a sense of vision,” Salina says. The panel of 30 or so distinguished speakers and experts will include several Nobel laureates, among them Sir Richard Timothy Hunt, a British biochemist and molecular physiologist who was awarded a 2001 Nobel Prize.

“One of the advantages of having Dr. Serageldin’senthusiastic support for this project is that he knows many Nobel laureates and other experts like Tim Hunt personally,” Salina says. “To me, he is one of the genius of Egypt. What he has done with the BA is incredible. It’s one of the first digital libraries in the Muslim world, pulling in over a million tourists a year. We should have something like this in ASEAN. We should have a center of excellence, the best of the best, with someone of his caliber to lead it. As I see it, ‘Meeting of the Minds’ is the first step towards creating such a center for the region.”

“Our focus is to help preserve and grow assets for multi-generational families,” Salina says of Heritage Amanah’s role in Indonesia. “We combine the strengths and capabilities of the Syailendra Asia Group with the support of our global networks and independent global fund desks.” Heritage Amanah reaches out to younger generations. Its Heritage Future Leaders Circle, with 50 members, enables selected young entrepreneurs to benefit from a closed global network and mentorship programs. “I don’t like the term ‘start-up’,” Salina says. “I see these as young businesses that will be future drivers of the economy. I choose members from hundreds of candidates. I’m not so concerned about their background, it’s the most impressive individuals that I want for the program.”

Salina has entrusted day-to-day management of Heritage Amanah’s Yayasan Muda Giat Peduli Indonesia to her 28-year-old daughter Tania Nordina. The Young, Active and Caring Foundation was established by millennials who are keen on spreading awareness of world issues. The foundation’s first campaign was on breast cancer awareness, called Millennials Goes Pink. “We provided more than 300 mammograms to underprivileged women from five areas on the island of Java,” Salina says. “Almost 10 percent of them were found to have cancer, and now we can help them.”

Salina launched Syailendra Asia in 2012 to complement the services offered by its affiliate company, Syailendra Capital. “The Syailendra Group manage over US$2 billion of assets in a combination of equity and debt positions in both private and public institutions over the years,” she says.

The group’s investment advisory activities are backed by an experienced team of professionals based in Indonesia, Malaysia and Hong Kong with her recent partnership with Carret Private Ltd. “As an independent private investment firm with a keen interest in equity investment opportunities, we have the capability to access senior and mezzanine debt for our investment partners throughout Southeast Asia and Middle East,” Salina says.

A Malaysian national and mother of two who went to university in London, Salina has 28 years of experience in the Indonesian financial industry. These include 18 years in equity sales and wealth management and seven in foreign private banking.
“Marriage was what brought me to Indonesia,” she says. “Nearly 30 years on (and another marriage later, to Gerald Rossi, former CEO of Excelcomindo Pratama – a man she describes as “my mentor”) I’m still here. I considered going back to Malaysia after my divorce. But my children are Indonesian nationals, so I decided to stay on.

““We want to attract ‘real money’ that sticks, rather than just the ‘hot money’ that flows in and out ””
Salina Nordin

Salina launched her career in the capital markets with Lippo Securities, as an institutional equity sales executive. She later joined Danareksa, Indonesia’s leading state-owned investment banking firm, where she was named Head of Wealth Management in 2003. In 2006, she moved to Credit Suisse as Business Development Director. In 2007, she joined Julius Baer Advisors Indonesia as CEO.
Salina has been a highly successful executive in the financial services industry for three decades now. No one would blame her now for taking things a bit easier. What drives her to travel overseas every couple of months, if not more, and why does she work so hard on creating initiatives like “Meeting of the Minds Forum”?

“I have got to the stage where it’s not all about commercial anymore,” she smiles. “I have two children, aged 28 and 16, and I want to do my part to create a good future for them. I think life will be tougher going forward with everything that’s happening in the world. I want to leave behind something sustainable. To me, relationships, networking, partnerships and trust are the things that matter, the things money can’t buy.”

Having said all that, the polarization and chaos that have broken out in so much of the world today do not faze Salina. “I actually see the turbulence as a window of opportunity for the Muslim World,” she asserts. “I view Southeast Asia as a mother ship sailing through the turbulence, like Noah’s Ark. We just have to embrace the challenge and move on.”