Actress and writer Happy Salma catches up with Prestige for a chat about her life now and how living in Bali helped her acknowledge her emotional wellbeing.

Happy Salma has quite a bit of work lined up for the rest of the year, including several monologues and theatre projects. Her upcoming movie Ali and Ratu-Ratu Queens which was filmed in New York in 2019, is set to be released in the upcoming months. So, she and the rest of the team are ready to promote it. But, as we’re doing this interview, she’s currently still in self-isolation in Jakarta, away from her husband and two kids. That, however, doesn’t stop her smile or her enthusiasm for sharing her story and her works like the truly passionate artist that she is.

While I was preparing my interview with her, I stumbled upon an Instagram post about an upcoming film project by director Kamila Andini titled NANA. Happy wrapped filming for the feature in West Java just last month. The film was inspired by a chapter in Ahda Imran’s book called Jais Darga Namaku. Along with her part in aforementioned Ali and Ratu-Ratu Queens, these are the first two film projects that she’s taken part in eight years. For NANA, she decided to take the role because it tells a story about a woman, her feelings and her struggles in the domestic world. The film was set in the ’50s and Happy has always wondered about life in that era, which was right after Indonesia claimed its independence. How politics affected family life at that time, even in remote areas, presented an intriguing setting.

It turns out, the roles that are challenging for her are characters close to our lives. Happy points out that playing roles that are far from her world is easier for her compared to playing characters that we might encounter in our daily lives. As for her own daily life, Happy mentions that her days are focused on her husband and two children. Film, theatre, as well as working on her own jewellery line – Tulola – are things she does in her spare time. Consequently, she confesses that she doesn’t have any “me time.” Instead, work is the closest thing she has to personal time. Then I asked her: Does that really count as me-time? “When I’m with the kids, I take care of their needs and affairs, and I keep my affairs for later on. But when I’m in a discussion, talking about ideas and making it a reality, I find it a pleasure. Maybe it’s because I don’t think of my work as work. I just remember that it’s work when there’s a deadline involved.” As for her aforementioned jewellery line, Tulola was founded by Sri Luce-Rusna in 2008; Happy joined later on along with Franka Franklin-Makarim. Actually, Happy first became involved in Tulola was because she wanted to write a book about Sri Luce’s mother and the preservation of traditional jewellery designs. She then encouraged Sri Luce to become a designer and make new designs. Long story short, Tulola now is going on its 14th year. It has lasted all this time because everything flows organically. Other than that, they have a mission to preserve the livelihood of the craftsmen, their skills, their craftmanship, all while making the line sustainable through new and innovative designs.As our conversation veered back to Happy’s personal life, she confides that having living in Bali for more than a decade has helped her acknowledge the state her emotional wellbeing. When she first got married, living in a small city is something that she and her husband decided early on.

Growing up in a small city herself, Happy felt that she found balance as she still cherishes the memories of living so close to the nature. So, when she starts having her own family, she had this idea of having her children go through the experiences that she did. And Bali has its own unique qualities and strong traditions which makes her feels safe, psychologically.She also learned that Balinese people understand all too well the situation that they’re in, but they do not resign to fate and they don’t give up easily. One other thing she learned is the extraordinary kinship amongst them that makes her feel safe living there. The way that the Balinese people set aside so much of their time, energy and money for religious events without feeling pressured amazes her as well. It goes without saying that the Balinese mindset and way of life has indirectly affected her own decision-making process.

A bit more recently, Happy also became one of the personas chosen to be featured in the second edition of Nadya Hutagalung’s book Walk With Me, to talk about emotional wellbeing. In the book, Happy mentioned a beautiful proverb heeded by the Balinese, “Desa Kala Patra.” The phrase, which she first heard from her father-in-law, translates into “time, place, condition.” She chose the proverb because there are so many things in life that drains and triggers all sorts of emotions, while that simple phrase helps her calm down and be more understanding. It essentially means that in a person’s lifetime, he or she can continuously change, based on those three aspects; time, place, and condition. By understanding that people and their lives are ever-changing, we are able to be more respectful towards each other. 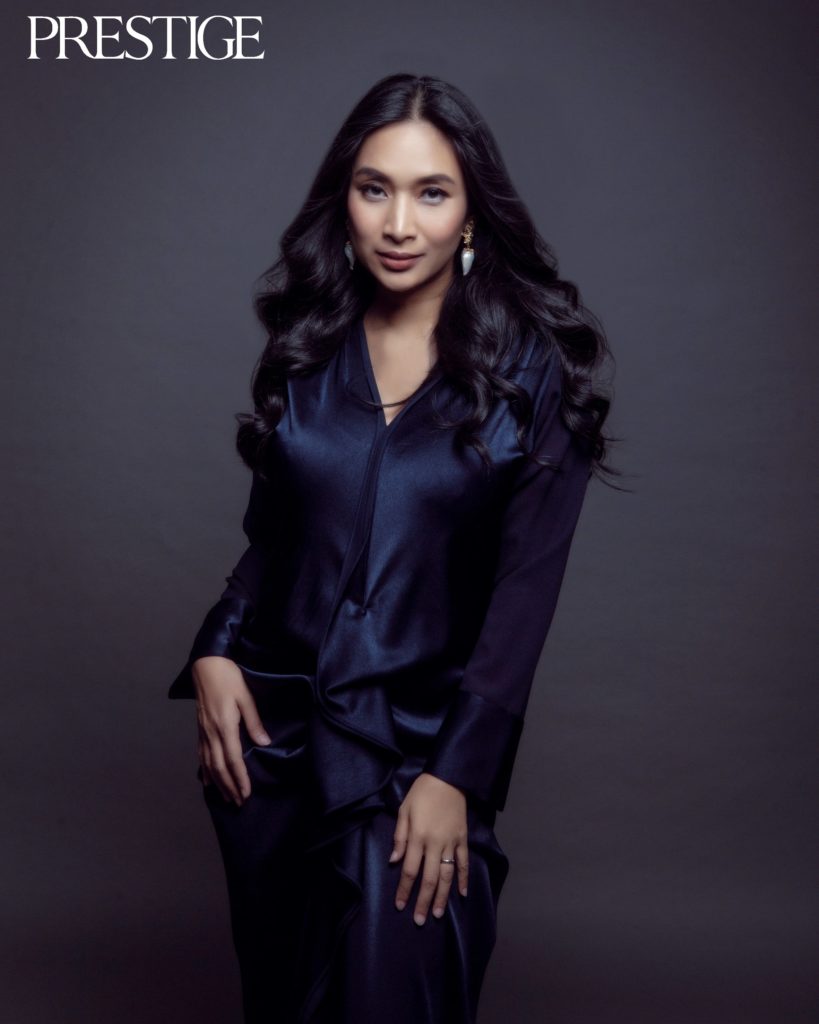 And as a mother, Happy instils the values of emotional wellbeing by giving her children the space to express their feelings; that it is okay to be sad, angry and feel every emotion. She thinks that mental health issues are still considered taboo in Indonesia because people are afraid of being judged and seen as crazy. She feels that people need to be able to speak their minds and express their anger and pain, thereby allowing a return to balance. And if one is not able to speak his or her mind, art can become a vessel of self-expression.For Happy, to key to be balance is, first and foremost, the presence of a support system, whether it’s family, an understanding partner, or even a domestic assistant. She then adds that as humans – especially women – we want all kinds of things, from kids, a career to a space to express our feelings.

“It’s all okay because in life, we need fire but we must know when to stop.”

Happy still has a few theatre productions to finish before the year ends. Six, to be exact. It certainly sounds like a lot, but this pandemic has challenged her managing skills as she has to do everything from a distance and online. In closing, I asked her whether she has a mantra to tackle each day. She answered simply: “Nothing lasts forever … just go with it.”

Pursuits
By Diandra Soliano
Sign up to get the latest luxury and lifestyle news delivered to your inbox.
Anindya Devy
Indonesian actress