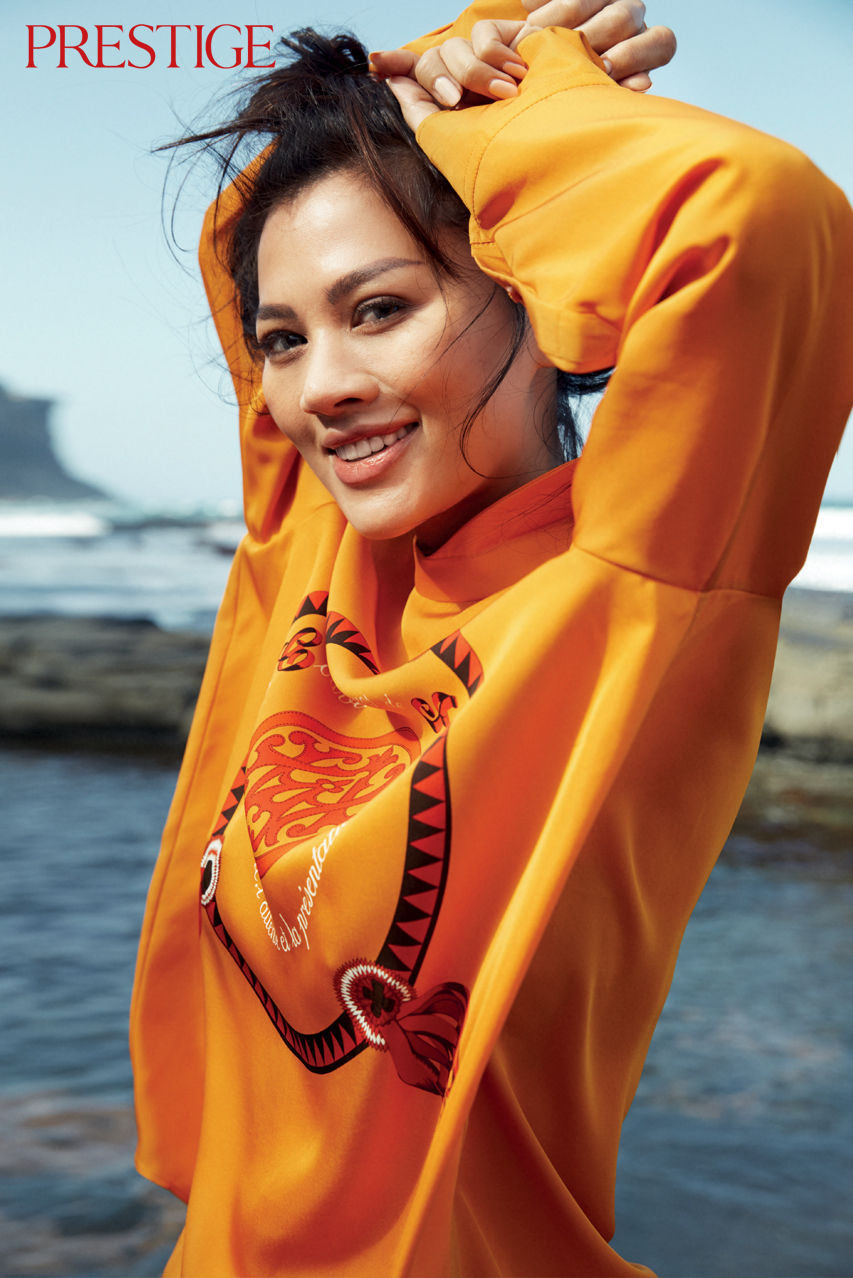 “LA will always be there, and now Jakarta is the great next chapter of my life.” Shot in picturesque Sydney, the ever-stunning Adinda Bakrie graces the cover of our September issue. Now 37 and mother of two, she tells Ajeng Anindita about the emotions of coming back home.

Adinda Bakrie wants you to know that she is really happy right now. It might be hard to believe, given her family background, that her life could ever have been difficult. But the truth is that we all have our own struggles and demons to deal with. At 37, Adinda has made peace with her life and with who she is – and wants to be. Instead of caring so much about other people’s comments on social media she focuses on using social media as a platform to connect and support each other.

Prestige caught up with her at her office at the 50-storey Bakrie Tower in Rasuna Epicentrum, just 10 days after she officially arrived back in Jakarta after living in Los Angeles for four years. The elevator took us to the 38th floor, where her team was preparing her for her interview and video shoot. We spotted a big indoor cycling bike in one corner. Adinda exercises on it every day, even if it’s just for 10 minutes, “It’s not good to sit down at a computer all day. Both physically and mentally, it’s bad for you,” she says while having her face done by her trusted makeup artist, whom she has known for almost 12 years. After the interview, Adinda will be attending the 17th Achmad Bakrie Awards night with her family.

She is astounded when she learns this is the ninth time she has appeared on the cover of Prestige. “Wow, I wasn’t counting! I like the fact that I’ve been growing up with you guys since I was 22. And you know what, maybe one day I can write a little autobiography based on all those articles you’ve written about me. I’m really excited about the next cover shoot, in Sydney next week.”

What do LA and Jakarta have in common? To be sure, both are busy cities, full of traffic. Jakarta’s infamous roads were one of Adinda’s concerns about moving back here with her two children: Kellan and Kierra. But interestingly, it has been an easier transition for her than she expected. She had thought that, owing to the cultural differences and the chaos on the roads, there were perhaps going to be more hurdles than she has encountered so far.

“But I guess that when you lower your expectations to a certain level, it becomes easier – and, you know what? It’s becoming more like an adventure for me,” she points out while sipping her glass of water. “I know, of course, that any transition won’t be easy. But I think that if my mindset is positive, it becomes more like a journey. I also tell my children that this is going to be something that we’re going to do and explore together – like teamwork. And, surprisingly, the traffic hasn’t frustrated me too much. It’s okay so far. But I have only been back for 10 days, so we will see!”

Kellan and Kierra are Adinda’s whole life right now. This is why she made sure they had a smooth transition. They went shopping together in the malls, picking out room accessories and furniture, and even dressing up their rooms together. Same goes for school. Adinda has been showing them pictures of it, telling them what their school is going to be like, how many other children there will be in their classes and so on.

“I think that as long as we involve them in the things they do, they will feel more connected to the new place. During the transition, it will be better if you are more prepared. Of course, seeing a lot of new things can be overwhelming for them, but the fewer surprises the better. And until now, they have been very happy, very busy, but good busy.” She has the biggest smile when she talks about her children.

Adinda moved to LA four years ago, in pursuit of a Master’s degree in Psychology. Just months ago, she finished it. There’s a part of her, she says, that will always miss LA – particularly her friends and the freedom she had there, “It’s a different kind of freedom, I felt very liberated there. But then I told myself that that’s exactly what I’m going to look for in Jakarta. I want to feel liberated here, maybe in another form. But I know that I like that freedom feeling, and LA has shown me that.” She pauses for a moment: “That’s what I miss and might continue here. Slowly.”

She continues: “You know I realised that I had actually left LA the second day I was here. I was swimming at my apartment building and I was just sitting by the pool, alone. It was kind of sad and I was crying a little bit, but it was a good cry, a cry of letting go and starting a new chapter. LA will always be there, and now Jakarta is the great next chapter of my life.”

Studying psychology was an eye-opener for her, particularly because Adinda has always been fascinated with human behaviour and thought processes. She thought she could be a problem solver for everyone around her. Choosing Psychology seemed like a good idea for her to be able to help others. Little did she expect it, but she has learned so much more about herself.

“I ended up helping myself,” she says. “I needed to connect with myself first, I need to listen to my problems, to be able to solve my problems first, to feel what my own feelings were and deal with them and be at peace. I think if you can help yourself, then you can help other people.”

Adinda used to feel she was under pressure to join the family business. When she was younger, she thought she wanted to do what she was passionate about. As she grew older, she realised that people sometimes don’t really know themselves what they’re passionate about.

She admits that she’s learning a lot about the Bakrie organisation. “I’m here now as a beginner, that’s my state of mind. I have less expectations, but I’m very excited. Whatever they’re throwing at me, it’s always something that I want to learn. I’m actively listening, I’m curious. Nothing is ever boring if you have a curious mind.

“Now, I feel like I’m part of this empire, and I want to learn what my family has built and be able to continue on. It’s amazing to listen to the history of my family. It touched me to the core, hearing what they have done. If I never try, I will never know, and right now I really want to be a part of it.”

The conversation turns to fashion. Adinda says she loves coffee talk with her designer friends and seeing them create fashion, and to be a part of it. “One of my favourite designers is Didit Hediprasetyo, who happens to be one of my dearest friends. Whenever I wear one of his pieces as I walk into an event or function, I feel powerful, beautiful and proud – not just because of the beauty of the dress, but because what I’m wearing was made by my best friend. To wear fashion by my friends is the most confident I could ever feel. If I had to sum up my sense of style in three words, they would be: comfortable, timeless, alluring.”

The last country Adinda visited was Japan. She loves the culture, traditions, the food and the fashion. But one of the most memorable countries she has ever visited is Ecuador. “It was very eye-opening. A lot of people think Ecuador is not that interesting, but they’re wrong. The country is very beautiful. They have a lot of historical places to see, and South Americans as a while are very friendly people. Perhaps Ecuador is like Indonesia was in the 1970s, so charming.”

She believes that if you never travel, you don’t have the tools to change your mind. You become rigid in your views, and thus more anxious. “It’s necessary to accept different beliefs and understand things from different perspectives. When you travel, you see how things can be different. So if something is going on with me and this society can’t accept that, maybe in another place they can accept me. It doesn’t mean that I’m a bad person. People are just different. It also makes me accept myself.

Looking ahead, Adinda reveals that she wants to help promote women’s empowerment. “I’m inspired by books and movies about brave women who were oppressed, fought back and succeed. I like it when women support each other. I believe that when one woman rises, everyone should be happy and think: If she can do that, I want to do it, too. We can lift each other up. And I really hope that Indonesia can have that attitude, because it’s already a man’s world.

“I want to create a safe space for women, where they can consult each other without judgment. The first thing we can do is to compliment each other more often. It’s not exactly a habit here, but it’s really nice for people to hear that they look good or that they do amazing work.”

Then Adinda got up from the interview table and thanked us for our visit. It was time she got ready for her next event.