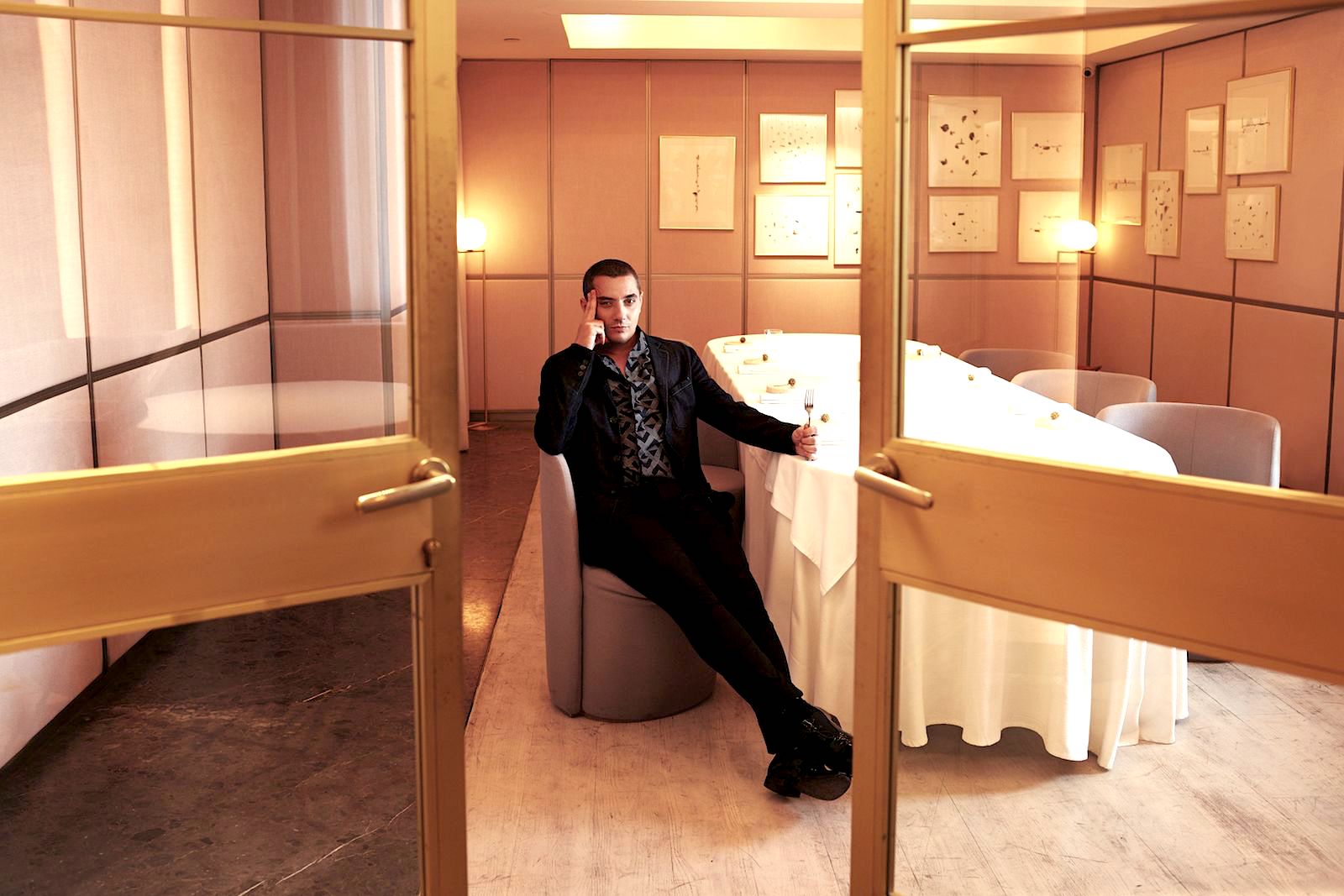 From farm to city, from boyish talent to a confident, full-fledged businessman-restaurateur. Julien Royer had to sacrifice a lot to get to where he is today. Since he was young, he has always wanted to gain a Michelin star. Now, Odette, his four-year-old restaurant at the National Gallery Singapore, has two of them. If someone had told him 10 years ago that his restaurant was going to be No. 1 in Asia, he wouldn’t have believed it. “We’re happy, but it’s the beginning of our journey. We still have a long way to go. It won’t last forever. I’m very realistic when it comes to my profession,” the pragmatist says.

“This job is demanding. It’s crazy. The days are very long. You sacrifice your sleep, your personal life, your social life. You see your friends go out every night, but you can’t,” the 36-year-old says. “You’re constantly questioning yourself whether we’re good enough. We always try to think of what we can do better every day. If you don’t have this passion that drives you, it’s pointless. If you don’t love this job, you’ll not succeed. He notes that it is getting better now though, as he has trained his team and has people who give him support. “But I’m never satisfied with what I do. I’m always constantly thinking that there’s something to improve. Not necessarily just the cuisine, but the atmosphere, the lighting, the music, the tableware. Every little detail counts.”

Odette was named for his maternal grandmother, from whom he learned to cook as a child. Mid-June, Royer will introduce Louise (his paternal grandmother’s middle name) in Sheung Wan, Hong Kong. His first overseas restaurant, which takes over the site of the now-shuttered Aberdeen Street Social, will have a “bistronomy” concept – gastronomy in a bistro setting.

“It’s a traditional French restaurant, reimagined,” he says. “The menu will focus on good sourcing and techniques, and straightforward plating. Plus, there’ll be a large selection of wines by the glass.” One of the rustic dishes that diners can experience from Royer’s home town is truffade – sautéed potatoes with garlic and warm, melting cheese from his hometown. Royer says this a good exercise for him to explore casual, affordable cuisine. He hopes to replicate the concept elsewhere if it takes off.

From that farm-to-table life

Royer did not speak a word of English when he arrived in Singapore with his wife Marie Agnes Fontana, also 36, whom he met in hospitality school (she had just arrived from Paris to study hotel management, and he fell in love with the fashionable girl from the big city). The couple did a stint at The St. Regis Bora Bora Resort before moving here in 2008.

“We’ve been together for 18 years. She’s someone who’s really supportive, understanding and loving,” he shares with a twinkle in his eye. “I like that she’s like a chameleon – she adapts very well anywhere, with any kind of people, and in any circumstance and environment. So she adapted to my life very well. As you know, I come from the countryside. When she came to my home town, she loved it.”

Royer grew up on a farm in Cantal, Auvergne, in central France. His calm and friendly demeanour undoubtedly stems from his upbringing and values.

“Growing up, we didn’t have much money, but we always ate very well. My parents taught me that throwing things away is bad. It’s a value that I strongly believe in, and one I try to apply in the kitchen. I hate wastage. I hate buffets as a consumer and a chef. I’m still a bit frustrated because we throw away too many things. But our leftover breads are given to an association here; they are collected every day.”

Sharing more about his “very humble background”, he continues: “My dad is very quiet. He’s a consultant who advises other farms how to run their businesses better. My mum is a farmer – very warm and friendly, she can talk to anyone. They’re very simple people. They grow their own vegetables and eat healthy. They know all about agriculture, ecology and soil.”

Royer, who is close to his mother, adds: “The other day, my mum called me to tell me that it’s been raining a lot in Cantal, so the vegetables will not be as sweet this time. That’s just how they live!”

The familial spirit is strong at Odette. Instead of hot-headed chef swagger, Royer believes in a collaborative kitchen culture, and counts renowned French chefs Michel Bras and Bernard Andrieux as his mentors. As a teenager, he worked at restaurant Bras in Laguiole, France, where among the many important lessons he learned from Bras was that someone can be the best chef in the world, but he or she will not achieve anything alone.

So, unlike many other top chefs, Royer does not shout or lose his cool in the kitchen. While acknowledging that many chefs have thrown plates at walls in rage, he “very rarely” swears at people. “I try to respect people and be fair to them. At Odette, to my memory, I’ve never thrown anything. Maybe a spoon when I was pissed off.”

While he is generous in imparting knowledge and skills, he also gives his staff a lot of room to innovate, experiment and challenge themselves. Thanks to his hands-on style, the team feels that he is a mentor who works alongside them. His advice to them is that they need to be patient and persistent to become a good chef.

“I always bring a positive energy and attitude to the kitchen, because they can get very tired,” he explains. “So I try to make them smile. I have to push them in a good way.”

“On behalf of my amazing team, thank you everyone for your support. In 2018, we soared to new heights and this fantastic achievement will spur us on for even more amazing things in 2019. It is an honour and a privilege to be able to do what we do, we will not stop pushing for bigger and better.” @chef_julien #michelin #Asias50Best #odetterestaurant @lobeholdgroup #lesgrandestablesdumonde #worlds50best #yesmichelinguide @michelinguide

Royer credits Odette’s success to his team, three of whom have been in his kitchen since day one. Senior Sous Chef Levin Lau and Sous Chef Yeoh Sheng Xiong have been working with him for close to a decade, starting together at Brasserie Les Saveurs at The St. Regis Singapore. Adam Wan, another senior sous chef, has been with Royer for almost eight years, since their time at Jaan – Royer had taken over from Chef Andre Chiang in 2011, where his produce-driven cooking style stood out with its distinctive point of view.

“These days, they do the disciplining and the shouting – if necessary. And now, I’m the good guy,” quips Royer, who leaves them to run the show when he’s travelling. “We grow together. We spend more time here than with our families. It becomes a special relationship.”

Similarly, Assistant Restaurant Manager Jia Ling came over from Jaan with Royer, and both General Manager Steven Mason and Head Sommelier Vincent Tan have been working at Odette since pre-opening. Royer, who counts them as the foundation crucial to the functioning of the team, says it’s important to give them opportunities to grow in their careers. “Also, the DNA of The Lo & Behold Group, which co-owns Odette, is about people. And my partner Wee Teng Wen, the Group’s managing partner, believes in investing in people.”

The camaraderie is obvious, with the chef and his team bantering from the moment they step into the restaurant in the morning and after the last petit four is served late at night. The relaxed, friendly atmosphere continues during preparation time or mise en place. If music is playing, there may even be singalongs (Royer is known to carry a tune very well).

But things change once the first lunchtime guest steps in. “We’re like a football team. During service, you have to be on top of your game. Concentration has to be very high. We need to be strict, disciplined and organised to deliver quality and consistency.”

To unwind after work, they go for late suppers together. If Royer and one of his sous chefs are travelling for work, they make it a point to check out the best restaurants or new places together.

With a solid team behind him, Royer is now able to travel a lot more for “Four Hands” collaborations with other world-renowned chefs. Most recently, he flew to the south of France to cook alongside Chef Mauro Colagreco of the three-Michelin-star Mirazur, which is ranked third on the World’s 50 Best Restaurants list. In return, he has invited many of them to Odette to collaborate, including Dominique Crenn of the three-starred Atelier Crenn.

He was also a guest chef at last year’s Margaret River Gourmet Escape, a popular gastronomic event in Western Australia that has brought in celebrity chefs such as Heston Blumenthal and Nigella Lawson.

His latest appointment by Air France to design a tailor-made menu for Business and First Class passengers travelling between Singapore and Paris-Charles de Gaulle, he says, is quite an honour for him. He is the first Singapore-based chef to work with the airline. It is but a feather in his cap and yet another sign that his career has taken off to new heights.