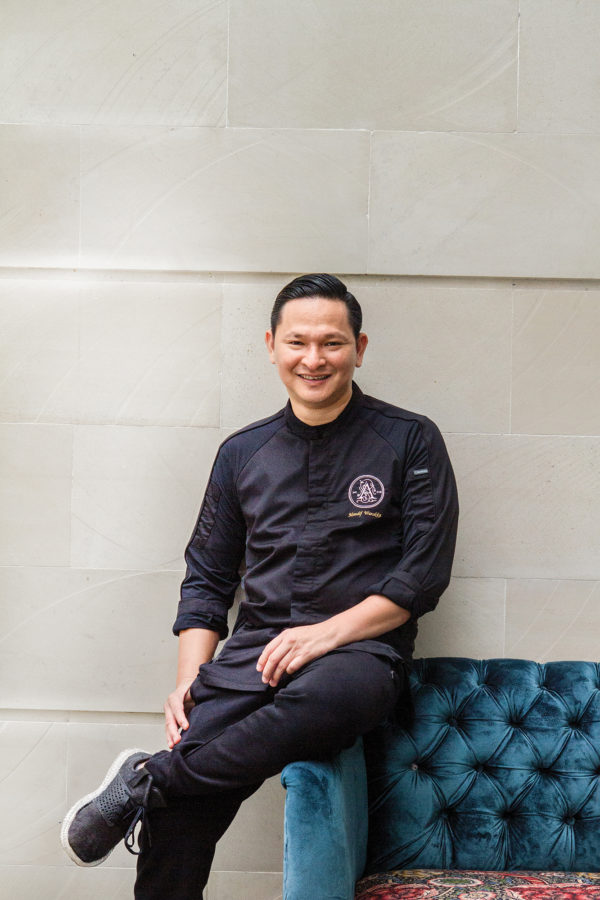 People & Events
Mandif Warokka on Being a Chef, Restaurateur and Creating Concepts
Share
Next article

“Besides a chef, I am also a restaurateur,” says Mandif Warokka during his visit to the Ambrosia Private Club in Jakarta, where he is the chef du patron. “I actually have a new hobby now: creating concepts.” Mandif then continued: “It is a new challenge for me; maybe because I have been in the kitchen for so long. Now I have another approach for this culinary business. I am thinking of the next restaurant where I can apply my skills to. So, this is the challenge for me next: Creating a new concept that can make customers go, ‘Wow, this is crazy’.”

When Prestige asked further about the concept he was developing, Mandif explains: “I call it ‘learning’. I have many sources I learn from: New York, Singapore, Hong Kong, Macau. So, I took concepts from restaurants from those places and then find what would fit in Indonesia. I think that the Indonesian market has large potential. I believe that whoever shows up with creativity and new ideas, they will lead the F&B market. And this is what I’m trying to do besides being a chef.”

As our conversation continued, Mandif took us down memory lane and he told us about how his journey in the culinary world began. “I started when I was in high school, basically. I was called lazy because I rarely studied and I often skipped classes,” he recalls. “My passion leans more towards skills. I liked learning new skillsets instead of just sitting and writing; that’s not my cup of tea. One day I came up with the idea that I wanted to be a chef. Thus, after high school, I decided to go to a vocational school to learn how to cook.”

Unsurprisingly, Mandif was also motivated to follow this path by established chefs he looks up to, including Thomas Keller and Ferran Adrià. “I remember buying Thomas Keller’s book. I bought it without knowing who he was, actually. But when I read the book, I really liked it. I saw myself in his dishes. They are simple, straightforward, minimalistic and also pretty,” Mandif elaborates. “I really wanted to become this kind of person. That was in 2001. In 2002, I became familiar with Ferran Adrià, who I saw as another ‘crazy guy’. I got this idea from them. And they inspired me to learn and work hard.”

Driven by his newfound motivation, Mandif learned the finer points of cookery at the Sekolah Tinggi Pariwisata Bandung. Like many of his peers, a lot of his experience comes from traveling. “I travelled a lot: Dubai, Abu Dhabi, the Netherlands … everywhere. It was all to learn. If I wanted to cook a European dish but I have never been to Europe, how would I know the flavour? So, I travelled and trained there in order to experience what it was like to go to the market and taste the fresh local ingredients. After that, I went to Dubai to gain more experience and work with chefs from around the world. I wanted to understand the professional culture and habits. I also became used to receiving constructive criticism, comments, arguments. I learned that in the kitchen we have to be firm and fair.”

After traveling the world and learning at some of the most renowned culinary hotspots, however, Mandif returned to Indonesia and made his way to Bali. “I was actually offered a very good position in Abu Dhabi as a head chef. I was very excited,” he reminisces. “But my wife was pregnant at that time, so we wanted to wait until after the delivery before flying to Abu Dhabi. At the time, I applied for several positions in Bali and I got the chef du cuisine position at Ju-Ma-Na. Turned out, I really liked it. Since then, I saw Bali as the island that I wanted to live in.”

In 2012 Mandif opened his own restaurant, a boutique fine dining restaurant called Teatro Gastroteque, which served French cuisine with a Japanese twist. Then in 2015 he opened another restaurant, Blanco par Mandif. “This is a different concept,” he explains. “It has the same format as a restaurant, but with Blanco, the focus is Indonesian cuisine interpreted in my own unique way. There are three menus: Indonesian cuisine that I’ve reinvented by changing the presentation and texture, the classics that I don’t change but improve on in terms of presentation, and the last and the most difficult is what I call the next Indonesian cuisine where there is acculturation of technique and flavours.” Mandif’s philosophy in running his restaurants is also quite interesting. “I want them to be unique; I don’t want to have to explain too much about the food and let it speak for itself,” he elaborates. “Through the flavours, presentation and the reasoning behind the food, people can see my passion on the plate. The philosophy of my restaurant is to have the ambience and the atmosphere meet the food instead of overpowering it.”

Looking into the future, Mandif shares that he is working on a cooking video series for his YouTube channel. “I want to educate,” he points out. “There are people who are enthusiastic about cooking but sadly can’t afford to go to a good culinary school. I am working to help these people learn how to cook for free. I am thinking of collaborating with the top chefs in Bali or from all across Indonesia. If the channel becomes well known, I hope to collaborate with global top chefs. I hope to motivate the younger generation with this.”

As our conversation came to an end, Mandif also told us about one more venture he has in the works: “I am going to establish my last fine dining restaurants. One will be in Ubud and it’s going to be a chef table. So, the restaurant doesn’t have menu. We create the menu on the spot. It would be like going to the doctor, you tell the doctor what you feel and then you will be given medicine. The concept would be something like that. And another one would be established Jakarta.”